Volkswagen has revealed a punchy off-road concept car called the ID Xtreme, based on the ID 4 GTX, to test public opinion for a more adventurous line of ID cars.

Visually, the bull bars up front, chunky off-road tyres and a roof-mounted LED light bar mark the ID Xtreme out as an off-roader compared with the road-biased ID 4 GTX on which it’s based.

Under the skin, the ID Xtreme’s power has been boosted by 87bhp over the GTX to 382bhp, courtesy of an uprated rear motor and software revisions. Combined with the visual changes, this is likely to reduce the ID Xtreme’s range by a noticeable margin – although how significant is not known, given the concept uses a second-hand battery pack.

This is because the ID Xtreme repurposes an old ID 4 test car (rather than converting a brand-new example) to minimise the carbon footprint. An aluminium undertray completely seals the body to protect those batteries, which are situated below the cabin in the MEB platform.

A specially developed noise maker has also been fitted into the wheel housings to give the ID Xtreme some acoustic presence. How this works is unclear, but a similar device was tested on Kiwi rally driver Hayden Paddon’s Hyundai Kona EV, producing a sound signature somewhat reminiscent of V10-era Formula 1 cars. 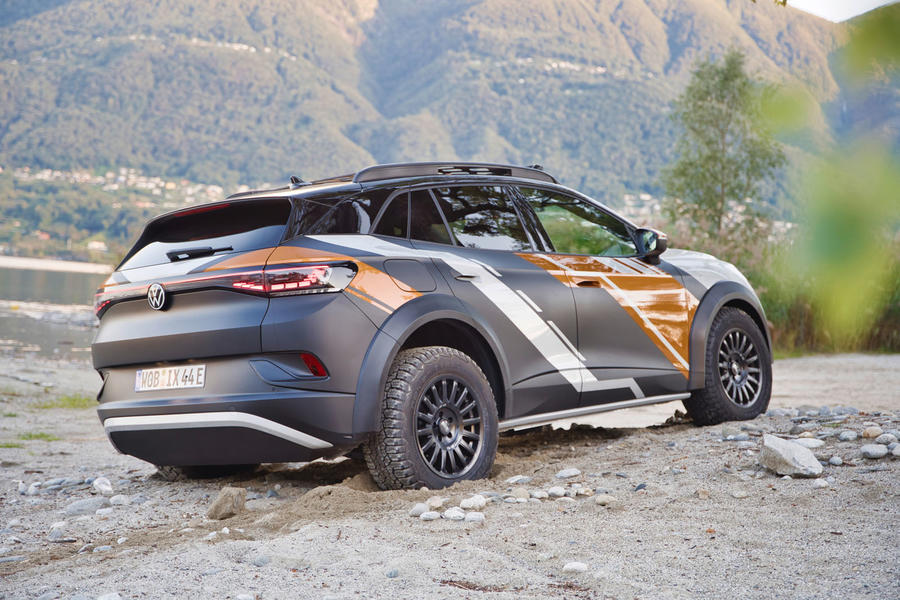 This technology could be used in future VW cars – or industry-wide – to maintain pedestrian safety by preserving ‘engine’ sounds, albeit at more sociable noise levels than on Paddon’s rally car.

Silke Bagschik, head of the MEB product line, said: “For many of our customers, vehicles are much more than just a means of transport. With the ID Xtreme, we are raising electric mobility from VW to a new performance level.”

Bagschik also hinted that the model is a litmus test for more off-road-focused VW EVs. She said: “We are really eager to find out how the fans of electromobility react to the vehicle.

“Based on the feedback from our community, we will decide how to proceed with the project.”

The ID Xtreme has been displayed at the ID Treffen show in Locarno, Switzerland – a gathering of fans of the ID line-up, supported by VW.

Should the Xtreme pass its first test – some of VW’s most fanatical supporters at the fledgling event – development of a production version could commence.