Under the skin: How acoustic glass makes car conversation easier

Glass may be one of the things most taken for granted in cars, but it plays a much greater role than merely allowing us to see where we’re going.

Noise insulation is an example, and acoustic glass is something premium that manufacturers have been taking advantage of for years. Its potential is even more attractive for EVs, because airborne noise is far more noticeable as powertrain noise all but disappears.

The technology behind acoustic glass is particularly elegant because, like so many clever ideas, it piggybacks on tech originally developed for an entirely different purpose.

Back in the day, windscreen glass was made safe for use in cars by subjecting it to a high-temperature process to produce ‘toughened’ or ‘tempered’ glass. The heat treatment puts an end to shards of glass lacerating occupants when it pops, but the inside of the car is showered with small chunks of glass, many of which would remain hidden under carpets and in crevices for the rest of the car’s life.

A better alternative, mandatory in motorsport before passenger cars, is laminated glass, which consists of a thin layer of polymer sandwiched and bonded between two thinner sheets of glass. Manufacturers have been fitting laminated screens to road cars since 1983, although toughened glass is still used in the side and rear windows of some cars.

Acoustic glass is a fancy form of laminated glass but still based on the same principle of laminating two sheets of glass either side of a single, thin sheet of polymer. Noise is controlled in a couple of ways, one by reflecting it back towards the source and the other by absorbing the sound energy within the polymer and glass package. Its use in a car means the side windows and windscreen are fitted with it, giving the added safety and security advantage of laminated glass all round.

Porsche gave a technical insight into its own use of noise-control glass recently. Its glass is composed of five layers: three layers of polyvinyl butyral (PVB) sandwiched between two layers of glass. The PVB has acoustic properties to absorb vibration in the surrounding glass, substantially reducing the transmission of sound into the cabin.

Acoustic materials and devices are often designed to target certain frequencies (from high-pitched to low-pitched). Porsche’s acoustic glass reduces outside noise by 7.3% in a frequency range of 630Hz at the lower end of the scale to 6.3kHz at the higher end. The sirens of emergency vehicles are pitched between 360Hz and 630Hz, so acoustic glass won’t blank out their warnings. Porsche’s glass is actually lighter than standard laminated glass, due to the increased thickness of the PVB portion, saving around 2kg in the Panamera.

The security benefi ts are also worthwhile, as the thicker PVB layer makes it more resistant to break-ins than conventional glass. Plus, it can still be tinted to make acoustic privacy glass. 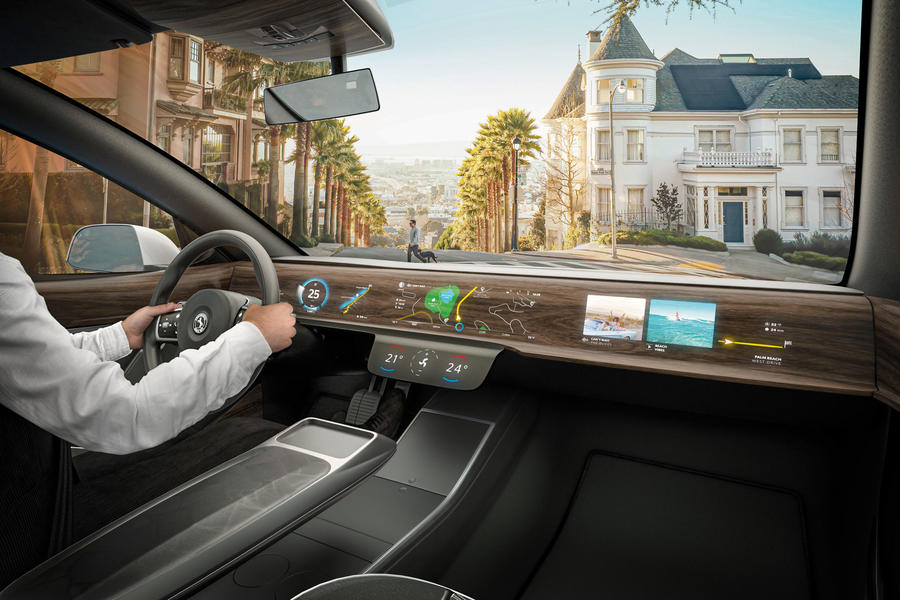 Continental’s Switchable Privacy Display won an innovation award at the Consumer Electronics Show. It lets passengers watch multimedia content outside of the driver’s view, thanks to two backlit displays that separate ‘private’ and ‘public’ viewing. Its so-called Shytech is aimed at minimising driver distraction as display use increases.