Toyota president and CEO Akio Toyoda has doubled down on his enthusiasm for hydrogen combustion technology, after taking to the wheel of the flag-bearing Toyota GR Yaris H2 prototype at WRC rally Belgium over the weekend.

The keen racer demonstrated the potential of the specially adapted prototype – a hydrogen-fuelled, combustion-engined concept version of the brand’s acclaimed four-wheel-drive hot hatchback – in Ypres, with four-time WRC champion Juha Kankkunen serving as co-driver. It was the first time Toyota has deployed a hydrogen-combustion prototype on track outside of Japan.

Following the run (shown on video, below), Toyoda said: “I am grateful to Juha for his courtesy in allowing me to drive. He guided me in sync with my driving, making me feel comfortable. The roads were tough―not only slippery but also narrow, and their surfaces seemed to change from moment to moment.

“They were like the roads used in Rally Japan, and it was a good chance to think about races with spectators in mind. We also had a Toyota Mirai at the venue demonstrating external power supply, and I believe that, together with driving using a hydrogen engine, we were able to highlight in Europe the potential of hydrogen as an option for achieving carbon neutrality.”

Kankkunen added: “Akio’s driving was great. And the hydrogen engine put out solid torque, making it no different from a gasoline engine. Because they emit zero CO2, I believe hydrogen engines will become one of the options for achieving carbon neutrality not only in the world of motorsports but also in the world of everyday cars.”

Using this technology, Toyota’s Europe CEO Matt Harrison said, would allow Toyota to “deliver almost zero tailpipe emissions without electrification, but it does so whilst retaining the things which fans love most about race cars – the speed and the noise.”

“Music to the ears,” he said, “especially to those of a petrolhead.” 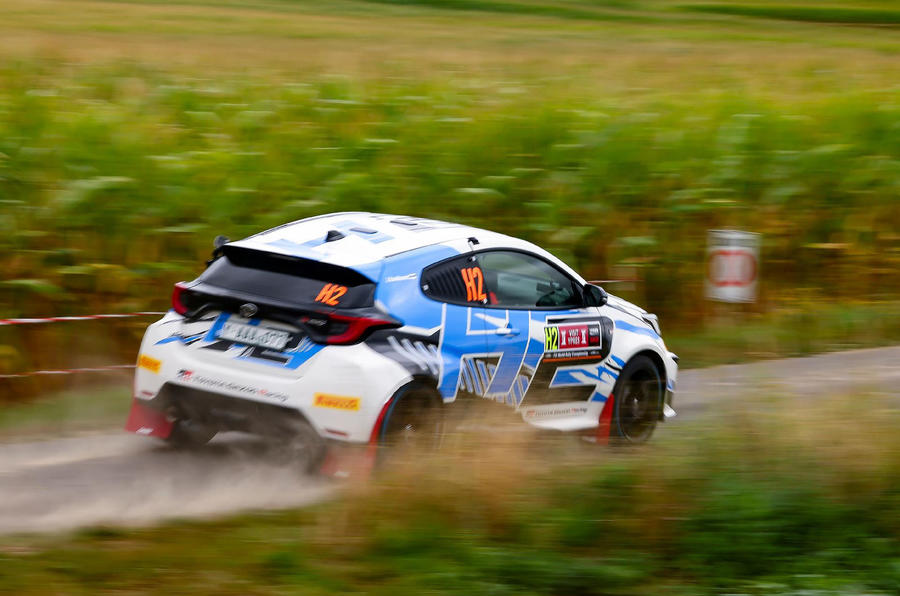 The GR Yaris H2 uses the same unit as the Corolla racer, with minimal modifications from standard, and has the same refuelling hardware as the brand’s Mirai production car.

The subtle mechanical modifications are limited to strengthening the block (as hydrogen explodes more violently than petrol), new valve seats and an upgraded injection system. Powertrain boss Thiebauld Paquet estimated that it would achieve “similar efficiencies” to its unmodified petrol counterpart, but performance details remain under wraps.

Speaking after the concept’s reveal last year, Paquet told Autocar: “When we started it, we created a bit of vibration and a bit of noise, so it was clear and apparent how it sounds. That was one of the things we wanted to demonstrate: compared to fuel cell technology, which is very quiet, you can still get this feeling from sport, where you can hear and feel the car.

“In the first instance, it’s a concept. The idea is to use sports to find out the difficulties and how we can accelerate, how we can quickly come to improvements in the technology.”

Toyota has not confirmed the production potential of the GR Yaris H2, but Harrison said this technology means zero-emission motoring “needn’t be a distant future”.

He said: “The uplifting message of the GR Yaris H2 is this: even in a zero-emissions future, we could still enjoy motoring thrills similar to those we enjoy today.”