After spending the past decade or so as possibly the fan favourite in the AFT series, Shayna Texter Bauman has now caused quite a stir in the off-season. On November 12th Texter Bauman got tongues wagging when the Red Bull Factory KTM Racing Team announced that she was leaving after a successful three year relationship. Rumours started almost instantly as fans tried to guess what was next for the rider with the most wins in the Singles class in AFT/AMA history. Was she headed for the Production Twins Class? Was she retiring to start a family? Was she making a return to the premiere class in the series? All these questions were answered less than a week later when the Factory Indian Team announced that she would be joining her husband Briar Bauman and Jared Mees on the Indian Wrecking Crew in the Mission SuperTwins class.

Texter Bauman, the first female to win a race in AMA competition as well as the owner of almost twenty victories in the Singles class, now finds herself on arguably the top team in the pits on a machine that has dominated the series for the past few seasons. While huge on talent, Texter Bauman is not large in stature so the jump into the SuperTwins ranks is a formidable task that could prove to be quite an undertaking for the talented rider. Generously listed in her bio at five foot nothing and 95 pounds, Texter Bauman has found TT circuits and short tracks to be her nemesis for years. Jumping onto larger machines in 2022, Texter Bauman will now have to figure out a way to wrestle the bigger bikes around the tracks that have caused her problems for years.
There is no doubt that if Texter Bauman was just a bit bigger physically she would have a championship to her credit. In 2017 she finished third in points and was just 27 points behind the leader at seasons end. Texter Bauman’s downfall that year was that she failed to qualify at the Daytona TT, Springfield TT, Buffalo Chip TT and the Springfield short track. Had she managed to get into the field at even a few of those races there is a good chance that she could have finished at the top of the points chase. Unfortunately for Texter Bauman, in the ultra- competitive Singles class, every time she didn’t qualify it was a kick in the butt down the championship ladder. With AFT just releasing their 18 race 2022 schedule, they haven’t made things easy for Texter Bauman as the series will make stops at three short tracks as well as two TT events.

This isn’t Texter Bauman’s first foray into the top class in the series as she spent three years in what is now known as the SuperTwins class from 2014-2016. Those three seasons were less than successful for Texter Bauman as she only managed to make six main events in those three years. These years had to be a bit humbling for Texter Bauman as she had been tied with race wins for the two seasons previous in the Singles class. These three years in the twins class not only saw Texter Bauman dealing with subpar equipment and large rider counts, but trying to come to terms with heavier machines as well. While 2022 will see Texter Bauman riding the top equipment in the series with what many would consider the top mechanics at her disposal, she will still have to contend with hopping onto a machine that will be close to 100 pounds heavier than the bike that she rode last year. For those keeping track at home that just happens to be her body weight. While she will benefit from lower rider counts compared to the last time she raced in the twins class, she will still have to find a way to muscle her way around the short tracks and TTs on the larger machine.

Texter Bauman finds herself in a very unique position in professional motorsports as she has now joined the team that also employs her two-time champ husband. As former rivals in the Singles class, Texter Bauman actually earned her first ever national victory over her now husband when she squeezed past him with four laps to go at the Knoxville half mile way back in 2011. Now pitted under the same tent as her husband as well as being teammates with most recent champ Mees, the popular trio have most likely cornered the lions share of fans come race day. In fact Mees may have to get used to playing second fiddle for attention on the team as there is a good chance Texter Bauman will be most popular come race day as win or lose she almost always gets the loudest cheers.
Nobody can question Texter Bauman’s talent and nobody can question her heart. She is never afraid to mix it up with the guys and at times has made passes that have had fans holding their breath. There is a good chance she could be a front runner at some of the mile and half mile events this coming season and perhaps even dominate at times. The big question is will her diminutive stature allow her to make her mark on tracks she has struggled at in the past. With the start of the 2022 season just a few months away, it won’t be long until fans have their answer. 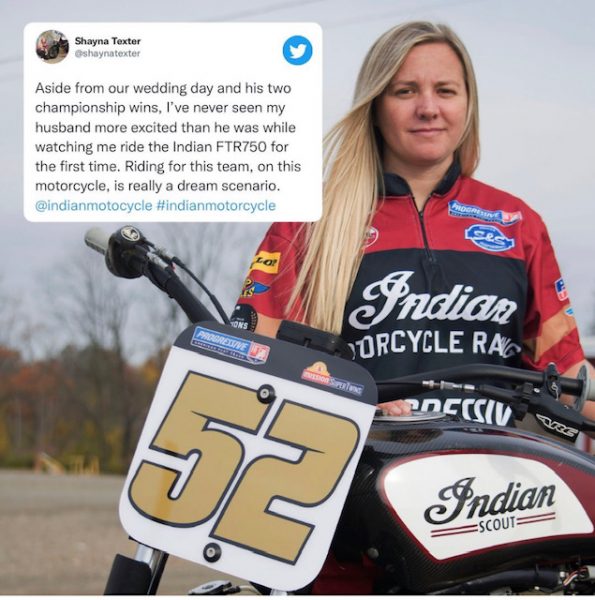