The life of Riley: Preserving a British car firm’s history

Owned and sponsored by Kestrel Beer (naturally), it was powered not by the 8.9bhp four-cylinder engine that Victor’s Uncle Percy designed and with which it left the factory but instead by a turbocharged 2.5-litre five-cylinder engine from an Audi RS3 producing, following some serious tweakery, 900bhp.

Of course, as with all high-speed endeavours, power isn’t everything: aerodynamics matter, too. Unfortunately, apart from being strengthened in key places and being fitted with larger dished wheels, powerful disc brakes and all the necessary safety kit, the record car looked very like an original Nine Kestrel. As a result, on its first official run, as it hit 110mph, its front end became lighter, causing it to weave uncontrollably until – disaster! – it careered off the track and rolled several times.

Fortunately, its driver and designer, Jon Webster, a legendary engineer in the modification world, was unhurt. But the experience persuaded everybody of the need to make the car more aerodynamic before attempting the record again.

Some months later, following much work, including a day in the MIRA wind tunnel, the team gathered at Elvington once more. Now wider, lower and smoother and fitted with one half of an Audi Quattro system plus a sequential gearbox, the Riley looked and felt very different.

More importantly, it became a record-breaker. Over the course of the day, it broke the record for the fastest standing start half-mile by over one second with a speed of 159.638mph. It also established six speeds for new classes and at one point reached a top speed of 169mph. 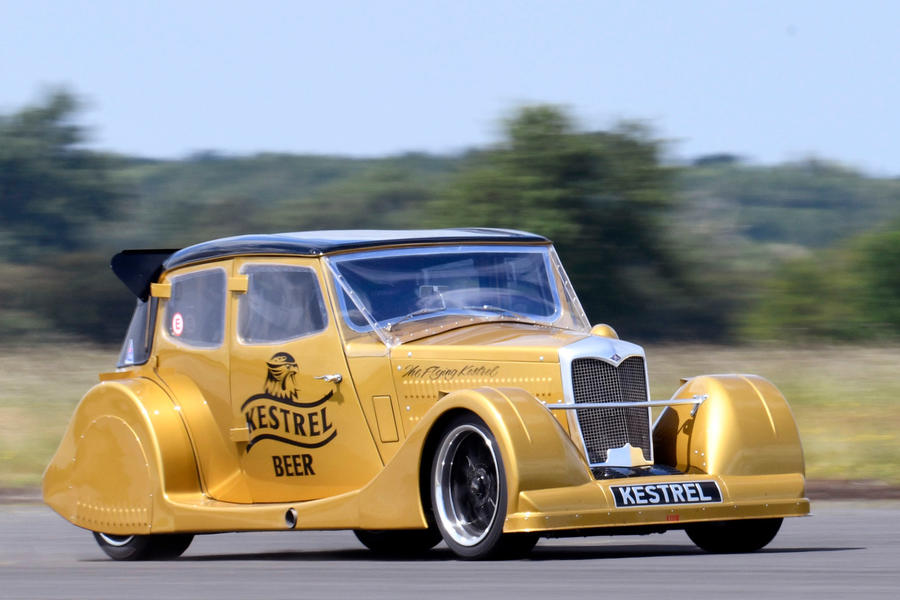 “What everyone has achieved is remarkable and, despite the modifications, you can still see elements of the Riley Kestrel body,” said a jubilant Victor. “Uncle Stanley [one of the five sons who helped steer Riley to success] learned to fly aeroplanes and incorporated aerodynamic principles into the Kestrel’s design, and the Flying Kestrel really flies!”

In that moment, I recognised not only Victor’s great pride in his family’s business but also sensed some of the same pragmatism that helped them achieve so much from such humble beginnings. The Flying Kestrel may have looked very different and been powered by a motor not of Uncle Percy’s design, but on this occasion it was the result that mattered – and the result was good.

That was summer 2020, when Victor was aged 85. Not that you would have known it. Energetic, still passionate about the family business and fascinated by the Flying Kestrel project, he was – and remains – a delight and an inspiration. He told me about his lifetime ambition: to open a centre dedicated to preserving the Riley name, filled with photos, documents and memorabilia relating to the company’s activities between 1898 and 1969, many of them to be digitised for easy access by future generations. It would be in a small unit beside Coventry Canal Basin in the centre of the city, a stone’s throw from the old site of Riley (Coventry) Limited, the family car company.

It seemed pretty ambitious, but if anyone could do it, I thought, Victor could – and sure enough, this September and despite various Covid-induced delays, the Riley Cars Archive Heritage Trust opened.

“I’m so proud of what we and everyone who loves and supports Riley have done,” says Victor when we meet at the centre in November. “We’re all volunteers, but everyone in and beyond the trust, including Coventry’s city officials, has worked hard to make it a success.” 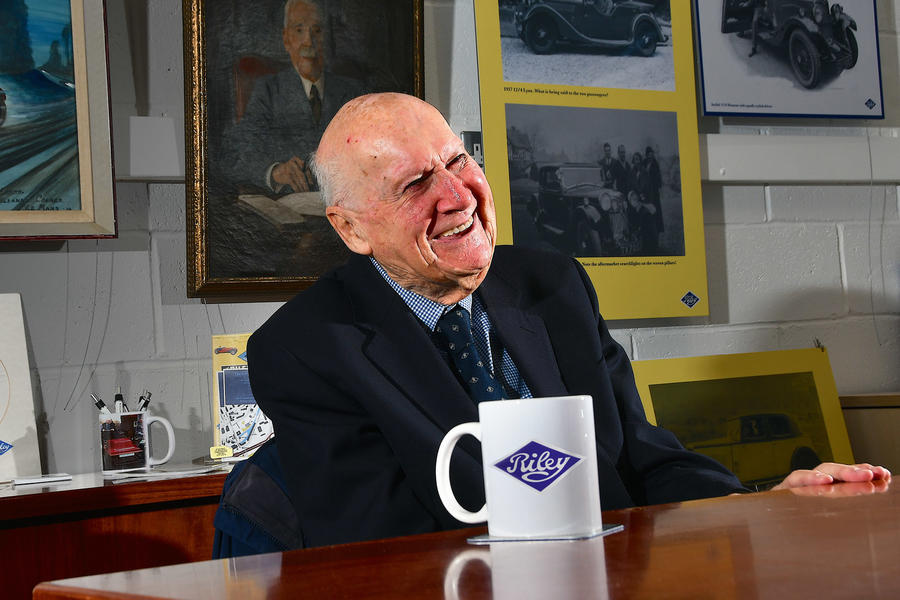 The story begins with Victor’s grandfather, William. He was a weaver who, when that industry began to wilt under foreign imports, asked his friend Henry Sturmey what to do. “Move into bicycles,” advised Autocar’s launch editor. “They’re the future.” So he did, founding the Riley Cycle Company in 1896.

William had five sons, confusingly each also called William so known by their middle names. “Percy was the inventive genius in the family,” says Victor. “He was a self-taught engineer who while still at school built his first car. In 1898, he and his brother Victor, my father, drove it to Stratford-upon-Avon. Grandfather wasn’t impressed, but Grandma gave the boys £39 to rent and equip a shed from where, in 1903, they founded the Riley Engine Company designing and building engines for Riley motorcycles and, later, motor cars.”

In 1918, this venture spawned the Riley car-making business, Riley (Coventry) Limited. During the next 20 years, the firm prospered on the back of top-selling models powered by Percy’s groundbreaking engines.

In 1938, Riley was snapped up by Lord Nuffield’s Morris Motors empire and then in 1952 the Nuffield Organization joined Austin to form the mighty British Motor Corporation where, sadly, Riley became just a badge on other manufacturers’ cars.

But the story doesn’t end there. A couple of years after BMW bought the Rover Group in 1994, its boss, Bernd Pischetsrieder, admitted to a strong affection for Riley. “He told me they shared their sporting elegance with BMWs,” says Victor. 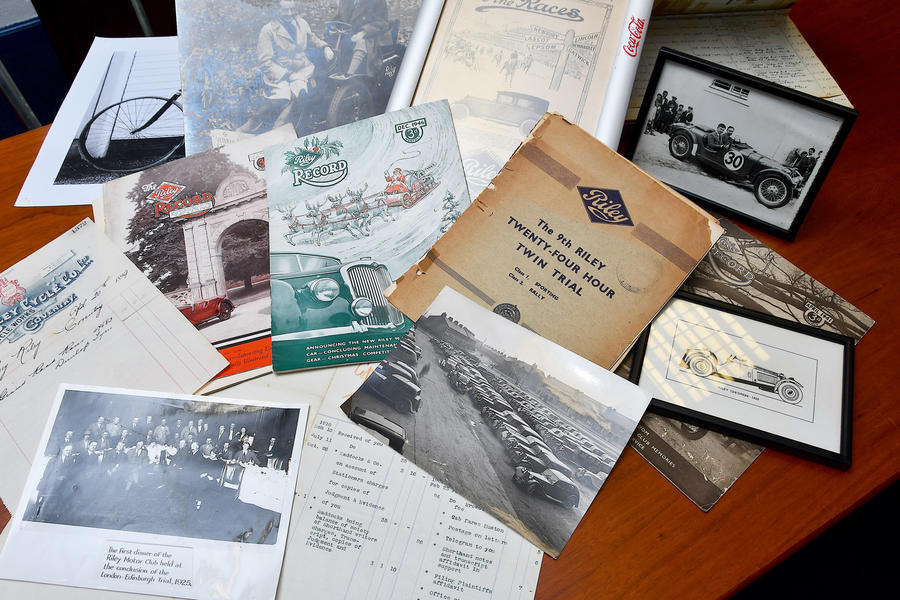 “In 1998, I invited him to Gaydon for the centenary celebrations of Uncle Percy’s first car. He said he would come on the condition there would be three Rileys, including a Brooklands, parked next to the control tower that he would see from his helicopter as he flew in. Of course, I agreed. He arrived, drove the cars and later announced there would be a new Riley. I eventually saw the prototype. But soon after, he was removed from BMW and his dream died.”

Amazingly, this wasn’t the first time Riley had crossed paths with Munich. In 1937, a joint venture was proposed that would have the two companies develop a new model based on a lightweight chassis and powered by Riley’s 1.5-litre engine, but pre-war secrecy within BMW stalled the plan. These stories and plenty more are brought to life by the exhibits and volunteers at the newly opened “spiritual home of Riley”.

A key aim is to acquire the original Riley engineering drawings and digitise them for restorers. The archive is still very much a work in progress, but with Victor at the helm, it won’t be long before it’s flying, just like that 900bhp Nine Kestrel.

1905 9HP FOUR-WHEELER: This was the first car in the Riley company’s evolution from bicycles through motorcycles and three-wheeled cars. As speeds rose, it was deemed sensible to add a fourth wheel. The car sported the world’s first detachable wire wheels (made by grandfather William) and was powered by a 1034cc V-twin.

1926 NINE: Described by the late great racing driver Tony Rolt as “the greatest advance in light car design”, the Nine of 1926 was powered by a 1087cc four-cylinder engine with twin camshafts that would form the basis of all future Riley engines.

1928 BROOKLANDS: This sporty derivative of the Nine had twin carburettors and was much admired by the famed engineer and designer Reid Railton, who extracted more power from its engine.

1945 ONE-POINT-FIVE: The first post-war Riley was conceived in 1943 and put on ice while the company’s war work progressed. This meant Riley was the first firm out of the traps with a new car when the hostilities ceased.