We had been driving for four hours and had yet to see another soul. No people. No cars. Just eerie, lunar nothingness stretching south to the horizon. To the left, desert; to the right, ocean. A packed salt road sewed a tight seam between the two. Under an overcast sky, the three surfaces faded into a single indistinguishable gray-brown smear.

We were traveling along Namibia’s Skeleton Coast, a region often referred to as the end of the Earth.

Given the view through the dusty windshield, the title felt apt. The untamed Skeleton Coast begins at Namibia’s northern border with Angola and continues 300 miles south to the former German colonial town of Swakopmund, where strudel-filled bakeries and beer gardens still line the streets — and where, a century ago, thousands of Africans from two ethnic groups, the Herero and the Nama, were killed by German soldiers.

The region contains a combination of cultures, landscapes and species unlike anywhere else on Earth, at times evoking a post-apocalyptic wasteland. 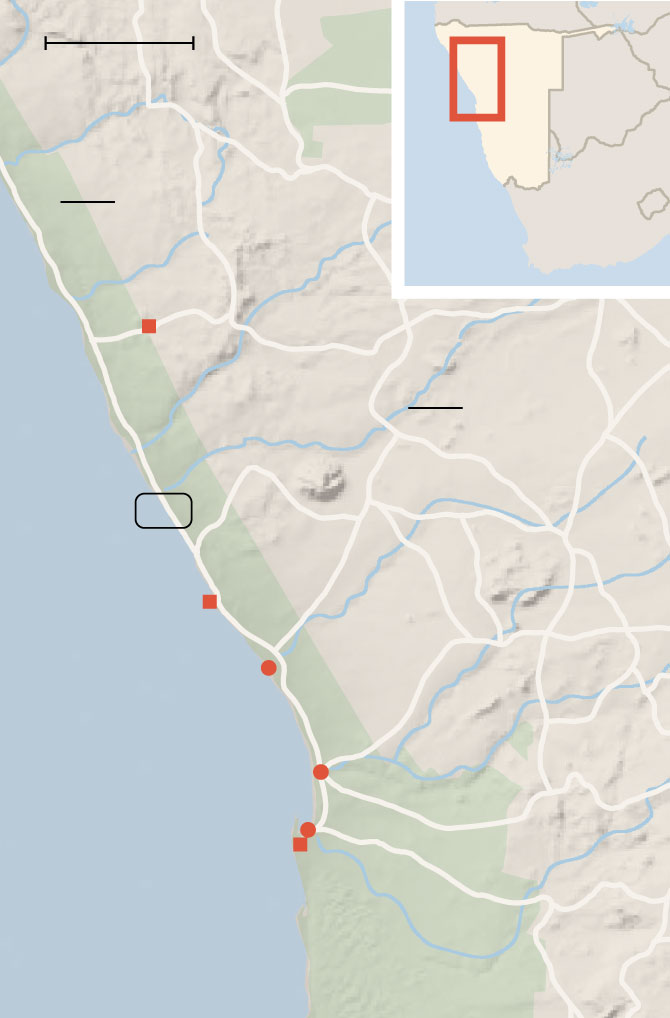 My partner and I found ourselves driving the C34 highway along this stretch of remote, treacherous land midway through a three-week road trip across Namibia in early 2021. A year earlier, we had packed up our lives and left our home and jobs in Seattle with plans to travel around the world, only to be abruptly halted by the global shutdown mere weeks into our trip. In what turned out as perhaps one of the more unique pandemic experiences, we ended up locked down in our first destination, Portugal, for seven months.

As things slowly opened back up in late 2020, we decided we could cautiously begin to revisit our original itinerary. Then came the task of answering a few key questions: Which countries were currently letting in U.S. citizens? (Very few.) Where did we feel safe going based on current Covid-19 case numbers, testing and masking requirements? (Even fewer.) And most importantly, where would we not be a burden on the country’s health care system if we did happen to get sick?

Namibia quickly rose to the top of the list. Among the least densely populated countries in the world, and a place where we could travel entirely independently, it seemed like a good choice. Little did we know how awe-struck we would be by its vast and varied landscapes.

I knew little about the country before we set our sights on it and immediately dug into researching its history and geography. The minute I learned about the Skeleton Coast, reading tales of shipwrecks, stark panoramas and 20th-century diamond rushes, I felt the pull of it. The wildness, the desolation, the inaccessible mystery of it all — it lit up my imagination, and I knew I had to experience and photograph it.

The gates through which we entered Skeleton Coast National Park, near the Ugab River, were guarded by twin skull and crossbones and towering whale ribs. The objects served as a warning: “Abandon hope all ye who enter.”

Before crossing into the 6,300-square-mile area of protected coastline, we were obliged to give our names and information — lest we didn’t make it out before nightfall — in exchange for a transit permit and a healthy dose of apprehension. We crossed our fingers and held our breath as we drove through the gates, praying that we wouldn’t blow a tire on the rented, tent-topped Toyota Hilux that had been our home in recent weeks, or get eaten by beach lions in the no man’s land ahead.

This arid desert, which dead-ends into violent Atlantic swells, has caused many unfortunate sailors, ships, aircraft and animals their untimely deaths. Their carcasses — rusting vessels, sun-bleached bones — are now visible reminders of the park’s hostile conditions. It is an inhospitable place where almost nothing grows, and where dangers, from wild rip curls to thick coastal fog, abound.

Visitors are often drawn to the park’s shipwreck-dotted coastline. Though only a few are still visible, hundreds of vessels have met their fates along this span of shore and were slowly devoured by the elements. Some can only be reached by plane or four-wheel drive.

To the far north, traces of the Dunedin Star remain. The British Blue Star liner foundered ashore in 1942, stranding its 106 passengers and crew. A plane and a tugboat, including several of its crew members, were also lost during the rescue effort. To the south, the Eduard Bohlen cargo ship ran aground in 1909 and now can be seen from above, a quarter mile inland, as a ghostly ship surrounded by desert.

We were able to see the remnants of the South West Seal, a vessel that crashed ashore in 1976, now just a scattering of wood and rusted metal peeking out of the sand, and the Zeila, a fishing trawler stranded in 2008 near Henties Bay, that remains a deteriorating but still largely intact and visible presence, now home to dozens of black cormorants, just offshore.

The few man-made traces here are all in a state of decay: Road signs are faded and decomposing, an abandoned oil rig is little more than a pile of rust, eaten away by time, sand and sea air. I pulled over every few minutes to capture these details with my camera, stretching what should have been a six-hour journey into one that lasted 11 hours.

Along the road we passed by other oddities, including the Cape Cross Seal Reserve, home to over 200,000 foul-smelling fur seals, and the Walvis Bay Salt Works, where massive salt pans are colored bright pink by the presence of Dunaliella salina microorganisms. Matching flamingoes stalked prawns in the nearby wetlands. Makeshift tables lined the road north of Swakopmund; resting on them were dozens of light pink halite salt crystals, often accompanied by rusted money boxes, lying in wait for honest passers-by to leave a few bucks in exchange for a treasure.

The barren landscape felt otherworldly, raw and powerful. Both exhilarating and terrifying. The coastline and colors slowly changed, the sand reddening, as we headed further south and entered the Namib-Naukluft National Park, home to the world’s oldest desert: the Namib.

Now the young country’s namesake (Namibia gained independence in 1990), the Namib has existed for at least 55 million years, its towering dunes plunging for eons into the churning sea.

The solitude and apartness we were chasing when we sought out this lonely part of the world — escaping from human-borne disease, yes, but also from the slog of our daily lives — awaited us in spades. Namibia made us feel small and insignificant in the best of ways — a perspective that I often crave in a world overwhelmed by instant gratification and never-ending battles for my attention. And in the end, the Skeleton Coast was a strange and beautiful reminder that we humans are powerless against time, and that in a war between man and nature, nature always wins.