Stock take: Are e-fuels part of our future? Clearly, with ICE cars continuing to be driven beyond 2030 and indeed continuing to be sold up until that point, there needs to be a broader answer than simply a route-one electric fix. But are e-fuels really the solution?

In the latest Autocar Business webinar, we were joined by Paddy Lowe, an ex-F1 engineer and founder of Zero Petroleum; Christian Schultze, director of technology research at Mazda Europe; and Steve Sapsford, managing director of SCE, a consultancy firm specialising in sustainable fuels.

What exactly are e-fuels?

PL: “E-fuels have various names. We actually prefer to call them synthetic fuels at Zero Petroleum, because we thought it’s a more generic name. It’s more user-friendly to the public at large and ‘synthetic’ means made by man, rather than by another process. So in particular, what distinguishes e-fuels from other sources of liquid fuels – biofuels, for instance – is that synthetics are industrially made and they don’t require the use of agriculture. They gain their energy from a renewable source that’s industrial, rather than coming via the biology of a plant.”

SS: “I use ‘sustainable fuels’ to be the catch-all for everything. So I’ve got biofuels under there as well as synthetic fuels. E-fuels are a special version of synthetic fuels that use renewable electricity to generate the hydrogen.

What we need to think about is how effective each of those types can be as time moves on. Some of the synthetics and particularly e-fuels aren’t available in large quantities at the moment, whereas the biofuels are available in much more significant quantities. So I expect to see a shift in use from biofuels through to synthetic fuels over time.” 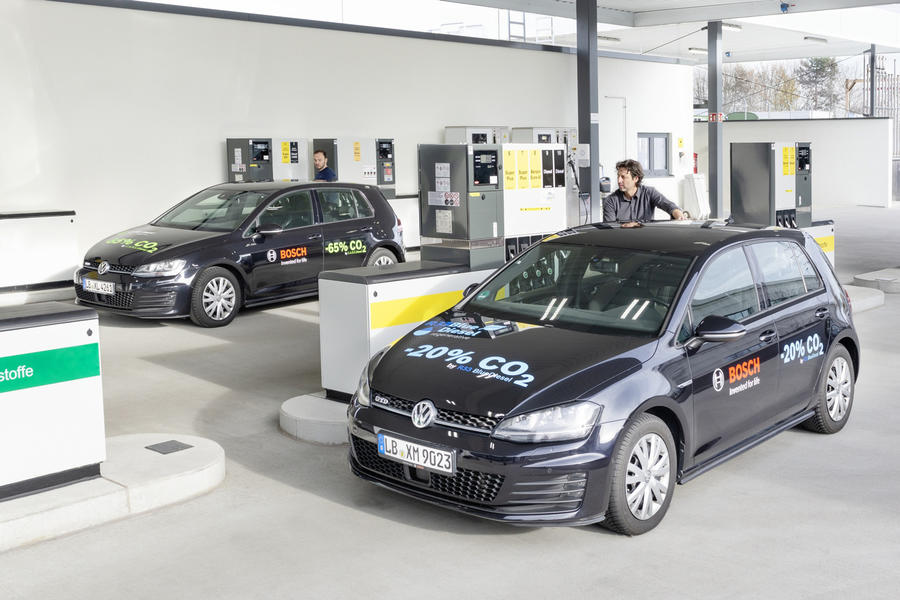 What does this mean for a major OEM like Mazda?

CS: “We have to find a solution to become climate-neutral, because this is also one of our commitments, by a way that’s compatible to the region. We see different approaches. In Europe, electrification seems to be the major way, but we believe it’s maybe more healthy and faster and safer to take a more technology-open approach. We call it a multi-solution approach to fit the best technology for the people in each region.

“E-fuels aren’t in competition with the electrification route. With having two pathways to follow, we believe we can assure better and faster to reach climate-neutrality.”

How is this helping if we’re still burning fuel?

PL:  “Let’s look at biology. We’re all animals and we actually burn hydrocarbons all the time. To function, we produce water and carbon dioxide. And then the plants recycle that from the atmosphere and create the hydrocarbons, which we eat. And that’s the biological carbon cycle. So when we create a synthetic fuel, synthetic hydrocarbon, we’re creating the industrial equivalent of what the plants are doing in biology. So when you burn the fuel in an engine and you create carbon dioxide, that carbon dioxide will end up being recycled into new fuel in a circular process, which we call the industrial carbon cycle.

“Everything is about ‘decarbonisation’, but we think that’s the wrong expression. It should be about defossilisation, because the real problem is the use of fresh carbon. Carbon that we introduce from geologic storage underground in rocks and put into the biosphere – which is where we will live – is creating global warming. There’s nothing wrong with carbon. It’s a really great substance. It’s what keeps us all alive. The problem is where we’re getting it from.”

How much greener are these synthetic fuels?

CS: “As these are synthetic fuels, they aren’t this conglomerate of different chemicals, as we see when we refine fossil gasoline or fossil oil into gasoline or into diesel. And so when we burn these e-fuels, they burn much cleaner than the conventional fossil fuel. So there’s a certain advantage, especially in terms of particulates or other things.”

SS: “There’s a whole audit trail in place, a kind of proof of sustainability. That’s like a little mini lifecycle analysis for the fuels themselves, where you can audit the whole production trail.”

PL: “One of the interesting things with fossil crude oil is you drill when you get a barrel of oil. You’ve got to use all of it; we can’t throw what you don’t want into the river. So what you find is that with the existing standards for fuels, all of that barrel will get put in one or more of these buckets. And this is why we have ships that burn the most horrendously dirty fuels: because that’s a lot of what gets left over.

“What’s fascinating about synthetic fuels is that there’s a whole new future there in chemistry, because we can make completely new fuels. The cost to make a bad molecule is the same as to make a good molecule, so we will make some terrifically good fuels in the future. A whole new lease of life in combustion, in fact, with high octane, clean burning and no sulphur.”

What about the costs of synthetic fuels?

CS: “We must be very clear. The production of gasoline diesel was made in large quantities, with industrial processes that gave companies their profits and gave us the fuel that we need. Now we’re making a complete technology change. We’re here starting up a new industry using new technologies, but never have these been made on such a big scale. And that means it needs investment. And that means also that the costs in the very beginning might be higher, and they will be higher than the current costs for raw gasoline. But with economies of scale and progress in the process, those costs will go down.” 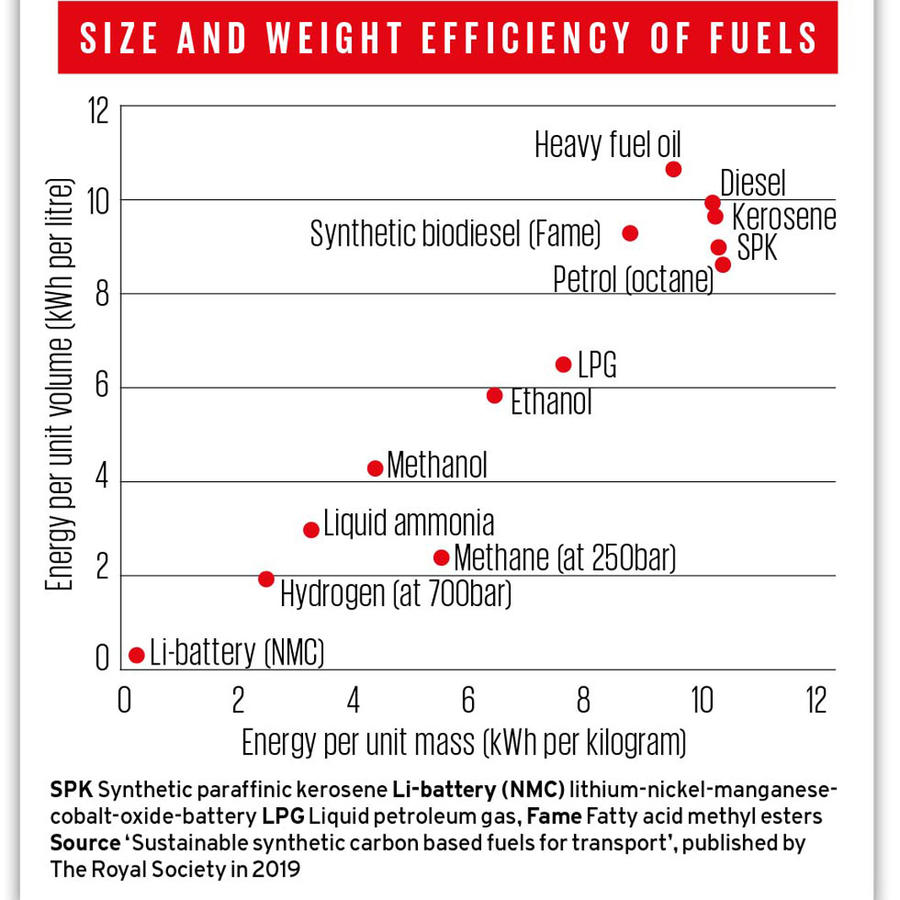 Does anyone have the budgets that will be needed for e-fuel development?

SS: “At the moment, we’re drawing the system boundary around the vehicle but only looking at the emissions from the vehicle in our current legislative framework. So you can call your hydrogen fuel cell vehicle or your zero-emissions vehicle ‘zero-atailpipe-emissions vehicles’. But most of the emissions have just been produced somewhere else in the cycle, unless they use renewable electricity.

“When you start taking all of that into account, to do the full lifecycle of a system, then it becomes a lot clearer. But at the moment, you and I as consumers don’t see any financial benefit from using renewable fuel. An OEM doesn’t see any benefit either, because they don’t get any credit for the fact that their vehicle could run on a renewable fuel. Fuel producers are trying to produce fuels that are more expensive than fossil [fuels], so why would they invest to scale up to deal with this stuff? And it’s all driven by the fact that what we’re legislating is a very small part of the cycle.”

So who do we need to convince of the merits of this technology?

SS: “This isn’t simple. And politicians like 10-second soundbites, and you can’t explain all of this in 10 seconds. What scares me is that by taking a very polarised view of what needs to be done, we’re backing one horse, and we need an awful lot of other things to happen along the way in order to make it happen, to make it succeed. And what happens if we don’t make it? Then it will be too late. We need to start having a… not exactly a plan B, but a parallel plan.

“Despite all of that and the words that you hear, actually underneath, particularly in the UK government, we have a renewable transport fuel obligation. This is how much renewable fuel you have to have in your pump. And that scales up over time. So, no, behind a lot of this, there is actually some incentivisation, it’s just nobody will talk about it.”