If you’re seriously considering an enormous three-row SUV in 2021, it must be because you truly do need it.

Maybe you need to move eight adults around regularly. Or maybe you own a boat and need 3,500 kg of towing capacity with sheltered space for gear. Or maybe you need a cargo hauler for work that can double as comfortable and roomy group transport to the cottage on weekends.

Whatever the reason, we’ll take it as a given that no one is out here buying a truck that soaks up well over $100 worth of fuel per tank at today’s gas prices without giving it some serious thought first. So, let’s get straight to the point: if you’ve concluded a large SUV is what you’re after and you don’t want to spend six digits, your choices are either something from Detroit – one of the Chevrolet Tahoe/GMC Yukon twins or the Ford Expedition – the seriously aging Toyota Sequoia, or the vehicle in question here, the Nissan Armada. 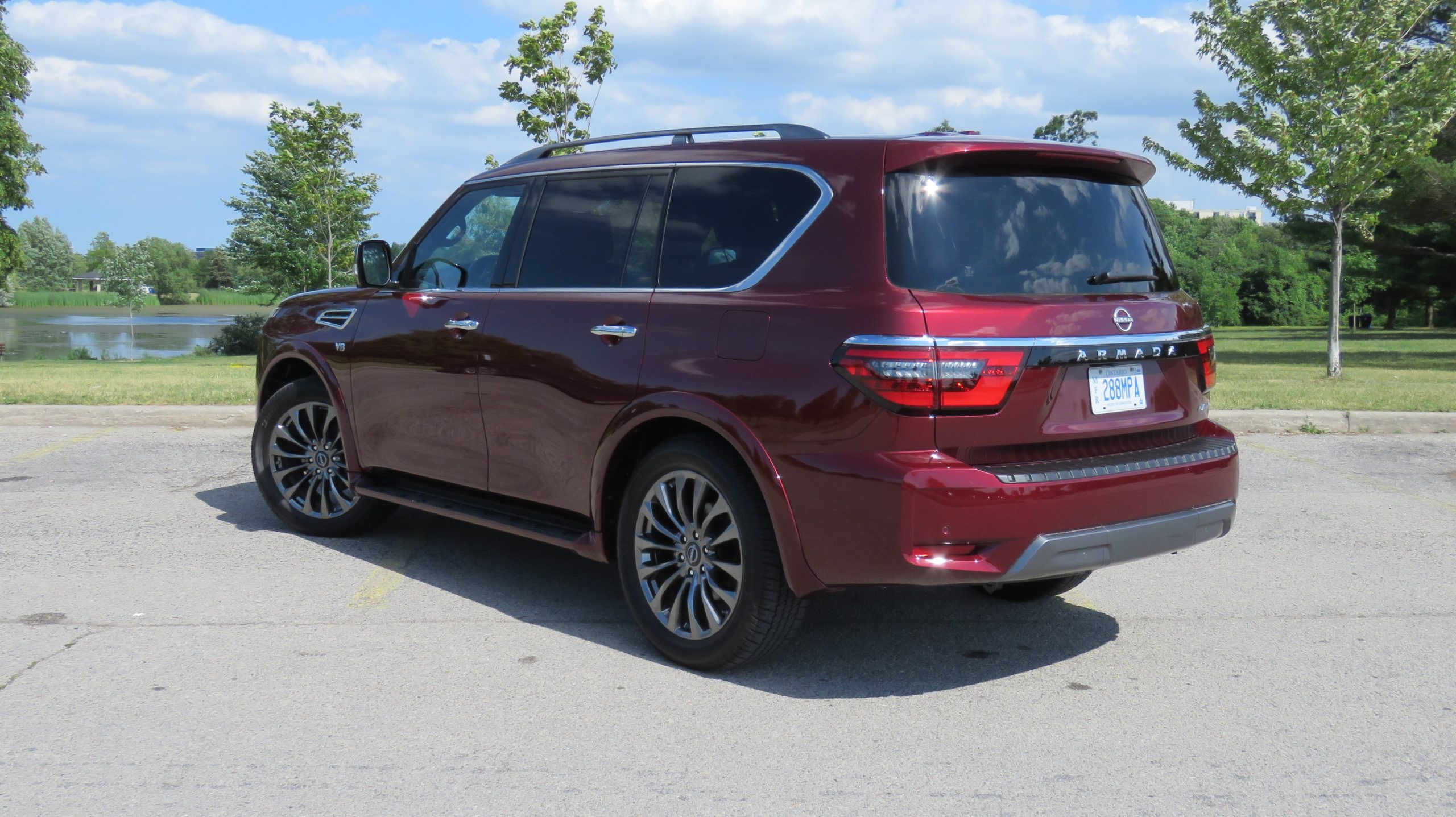 The Armada is sporting a refresh for the 2021 model year, which introduces features like an updated grille design, new LED headlamps and fog lights, and updated wheel designs that go up to 22 inches. On the inside, there’s a new 12.3-inch high-resolution infotainment screen, available second-row captain’s chairs with a centre console, and so much quilted and cinched leather on this Platinum grade that it comes across as downright opulent. These improvements push Toyota’s 13-year-old Sequoia firmly out of frame and position the Armada as the only realistic choice for those who don’t want to buy American. 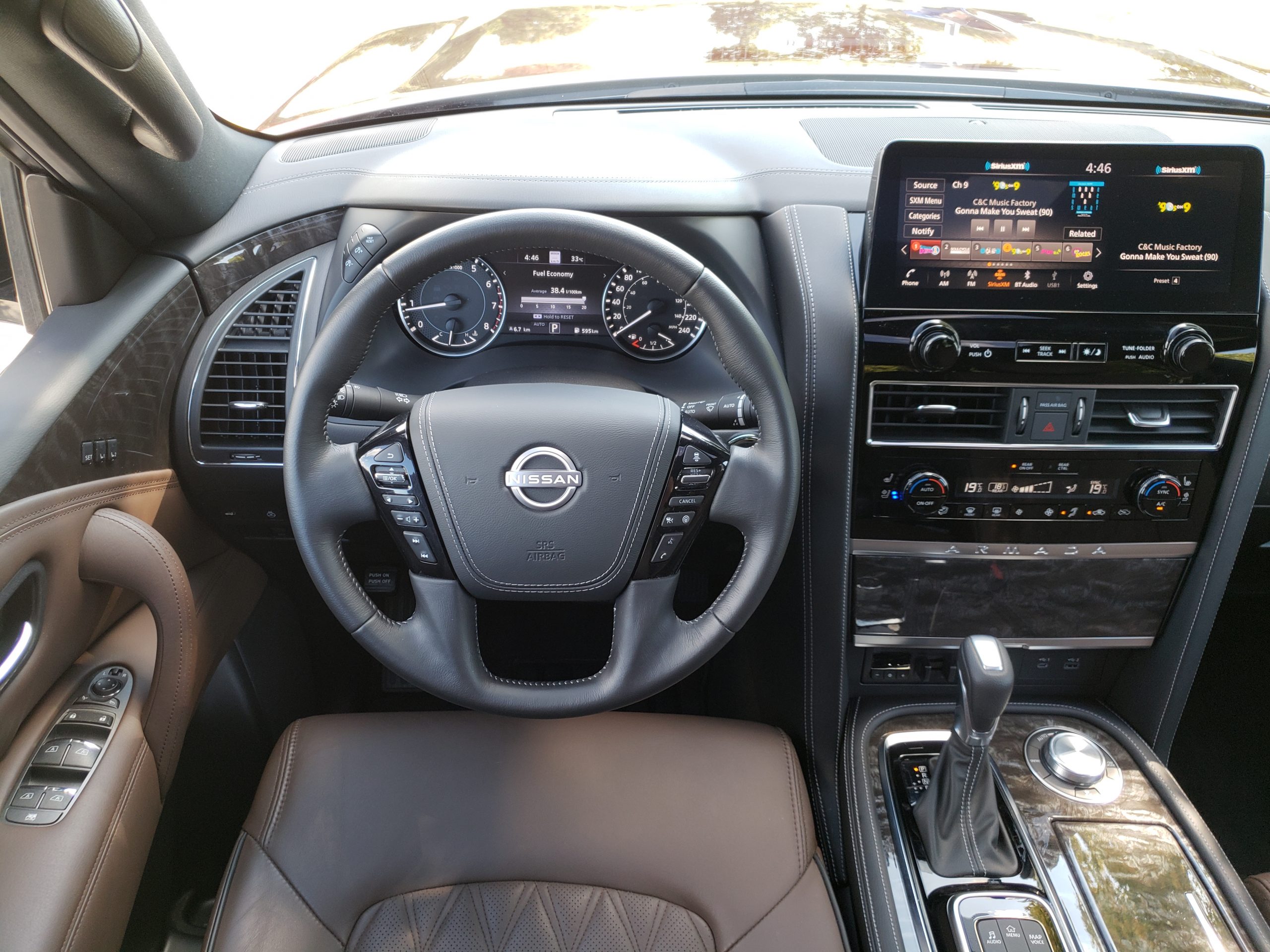 On the other hand, Americans do going-big like it’s a national pastime. And when it comes down to the nitty-gritty stuff, the Armada still has a hard time keeping up with the Joneses.

Take the powertrain for example, which is unchanged: its 5.6-litre naturally aspirated V8 produces a maximum of 400 hp and 413 lb-ft of torque, paired with a seven-speed automatic transmission and standard four-wheel drive with a two-speed transfer case. The power figures are about right for the class, and no one is expecting a huge truck to drive like a sports car. But at a curb weight of 2,742 kg (6,046 lbs), the Armada runs out of grunt before a Yukon Denali does, which gets 420 hp and 460 lb-ft of torque from its larger 6.2-litre V8, weighs less at 2,587 kg (5,704 lbs), and has a standard 10-speed automatic transmission that does a better job of getting things moving.

Plus, it’s not that the Armada’s ride is rough. In fact, it handles quite well for its size. But GM’s four-corner adaptive air suspension works magic on its larger SUVs. It does cost extra, but Nissan has no equivalent technology. And the Armada’s fuel consumption is on the high side even for its size bracket at an estimated combined average of 15.4 L/100 km, which is higher than every configuration of the Tahoe, Yukon, and Expedition.

The 2021 Armada does boast a best-in-class towing capacity of 8,500 lbs that applies in both the SL and Platinum grades, and it now includes a standard factory trailer brake controller as well as trailer sway control. Trailer brake controllers cost extra with the competition, so that could be a compelling reason to opt for the Nissan. There are also plenty of standard safety features here, many of which command an extra cost in similar trucks.

There’s also not a lot of messing around with options here: the only choice to make is between the two grades mentioned, and whether to choose the captain’s chairs on the Platinum grade, which adds $1,000 to its total as-tested cost of $79,428 including a $1,950 destination charge. That simplicity and predictability in pricing has its upsides once you start digging into the competition’s option sheets.

Those captain’s chairs are an excellent addition if this is how you’ll always use the cabin: they’re sizeable, comfortable, and heated. However, the second-row console that’s added between the seats, as useful and spacious as it is, is permanently installed, meaning you can’t access the full 2,692 litres of cargo space in this configuration. You can fold the seats forward out of the way to place items around it, or you can use the roughly 465 litres behind the third row. 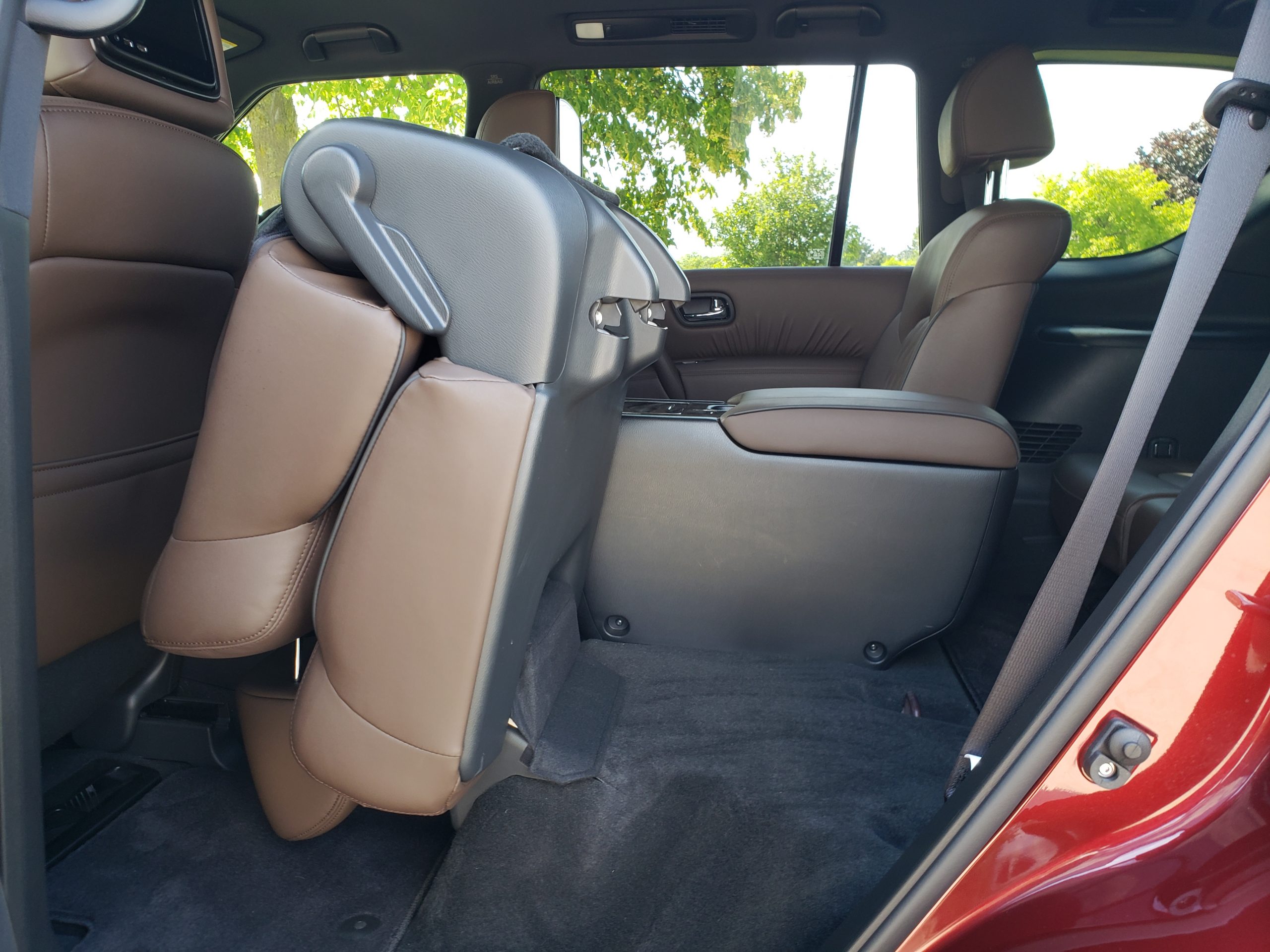 One of the most important updates here is the redesigned centre stack, which incorporates a 12.3-inch widescreen infotainment screen. Below it, a wireless phone charger is tucked into a cubby with a door, which goes well with the standard wireless Apple CarPlay functionality. (Unfortunately for Android users, Android Auto is still wired for now.) The screen itself is perched rather high and is tilted at an angle that causes reflections, but it doesn’t put as many functions out of reach as one might think. However, switching between the audio and navigation screens or back to the home screen requires using the controller unit mounted beside the driver on the centre console. That’s a big arm swing for a relatively simple function. 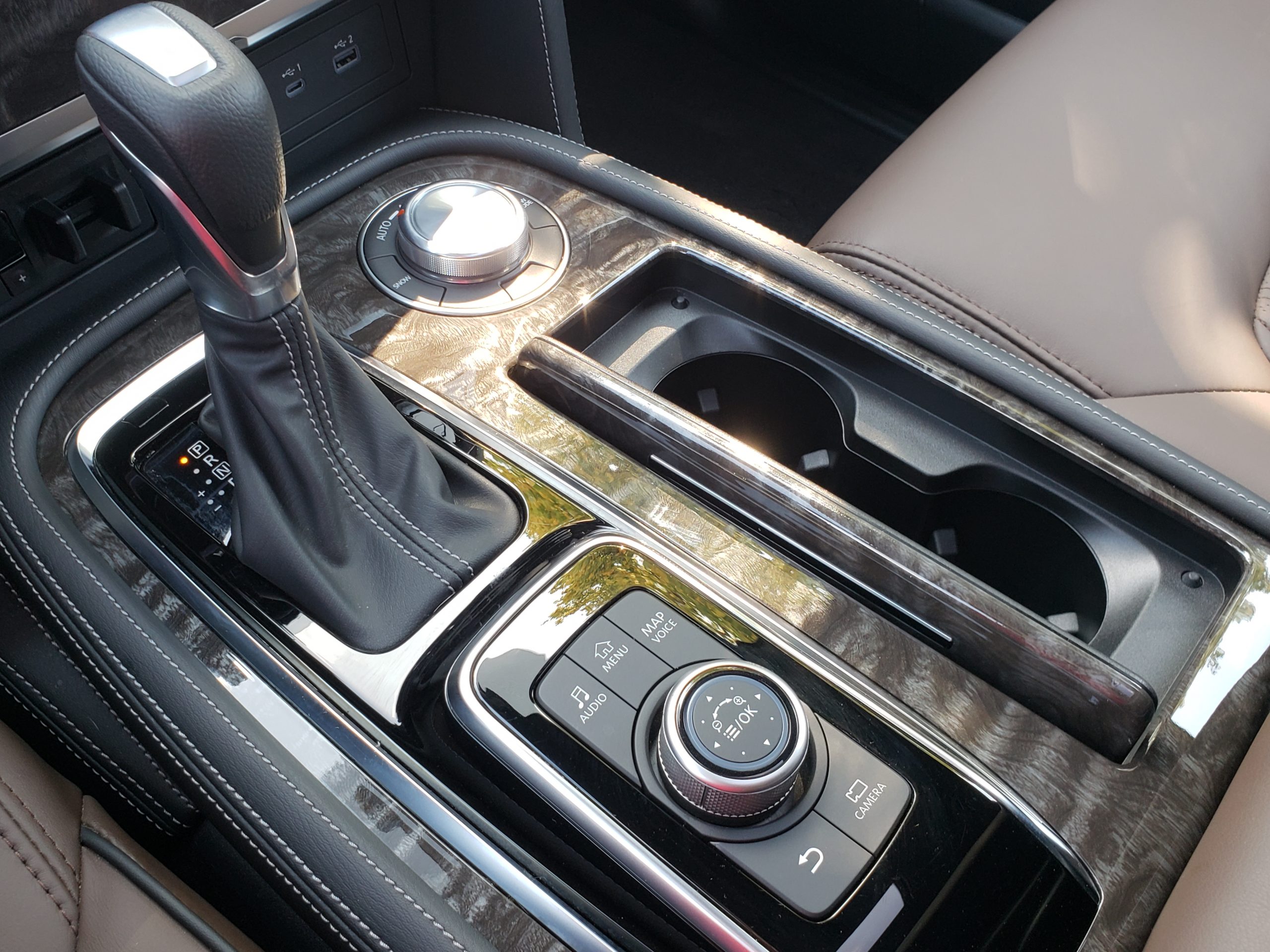 That lower controller is also where the button for accessing the around-view camera is located. This is standard on the Armada, which is good because it’s all but essential on a vehicle of this size. That said, several of the Armada’s competitors have more sophisticated systems available with multiple angles, including for trailering.

The 2021 Armada’s updates look pretty on their face, but in terms of outright functionality there are plenty of good reasons to choose its competition like fuel efficiency, usability, and drivability. However, a small set of drivers may prefer the Armada’s easier-to-shop and more budget-friendly alternative to the long option sheets found on other large SUVs.