While I was driving it, I had to remind myself the Mazda CX-9 Signature is not a luxury vehicle, because man it sure does a good impression of one.

The second gen CX-9 was all-new in 2016 and is built on a platform shared with the Mazda6 sedan, with which it also shares powertrains. On that front, all CX-9s are driven by a 2.5-litre SKYACTIV-G turbocharged four-cylinder engine that produces 227 horsepower and 310 lb-ft of torque on regular fuel and 250 hp / 320 lb-ft with 93 octane. The only gearbox available is a six-speed automatic that’s paired with standard all-wheel drive.

Canada gets five CX-9 grades, seven if you count the GS-L and GT Captain’s Chairs separately, that are differentiated by levels of content: GS, GS-L, GT, Kuro and Signature.

For 2021.5, Mazda’s mid-year update designation, the CX-9 receives two new tech features. Perhaps the most significant is a 10.25-inch multimedia display with an updated Mazda Connect interface, which is standard on all grades. It comes with Apple CarPlay and Android Auto support, along with SiriusXM satellite radio, embedded navigation and other features. The new display will also support Mazda Connected Services, which allows for remote engine start / stop, locking / unlocking doors, and other features via the MyMazda smartphone app. Mazda Connected Services will be rolled out this fall.

For the purposes of this review, Mazda Canada set me up with a top-line Signature tester finished in Machine Grey Metallic ($300 paint charge) with a Deep Chestnut Nappa leather-trimmed interior. Apart from the paint charge, all equipment on my test vehicle is standard issue. Key features include heated, leather-wrapped steering wheel, heated and ventilated front seats, heated rear seats, Bose premium audio with 12 speakers, power moonroof, and a lot more. 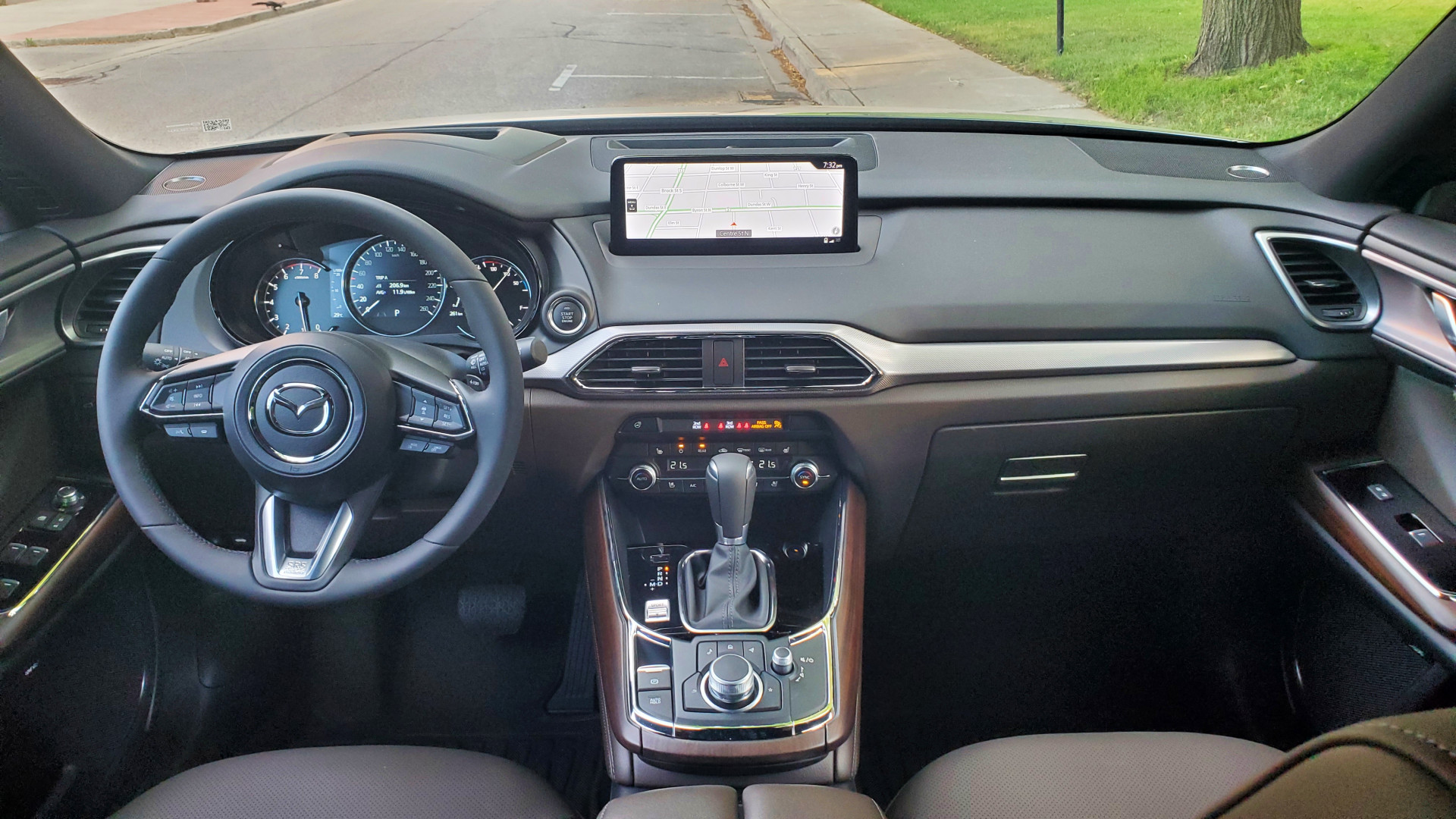 The CX-9 Signature is a handsome SUV. Its large pentagonal grille, human eye-shaped LED headlights and 20-inch alloy wheels give it strong curb appeal. Even though SUV design is somewhat limited by form factor, Mazda designers have done a good job of giving the CX-9 some interesting curves, shapes and surfacing details that keep it from being boring and uninteresting. It’s not a sports car, but at least the CX-9 has some style, which many of its boring and boxy rivals don’t.

As much as I like the CX-9’s sheet metal, the cabin is where this SUV really shines. As I said at the outset, there is a strong up-market feel here that other mass-market SUVs simply don’t possess. From the Santos Rosewood trim in the centre console and on door switch panels to the stitching detail of the perforated Nappa leather seats, and the solid, tactile feel of controls and switches, the CX-9 is punching way above its weight.

What I’m struck most by, and I think this sentiment aligns with Mazda’s governing philosophy, is the logical elegance of the layout. One can slide behind the steering wheel of the CX-9 and figure out how everything works in a few minutes. There’s plenty of sophisticated tech undergirding the proceedings, but it exists mostly in the background. It doesn’t get in the way.

The instrument cluster is partially digitized, but it uses familiar round gauges to convey vital information. The centre stack has tastefully designed buttons and knobs, but they require no explanation. It’s a similar story with the multimedia interface, which has a rotary knob and a handful of buttons to govern the 10.25-inch screen’s multitude of functions. Fiddle around with it for a few minutes and you’ve mastered it. 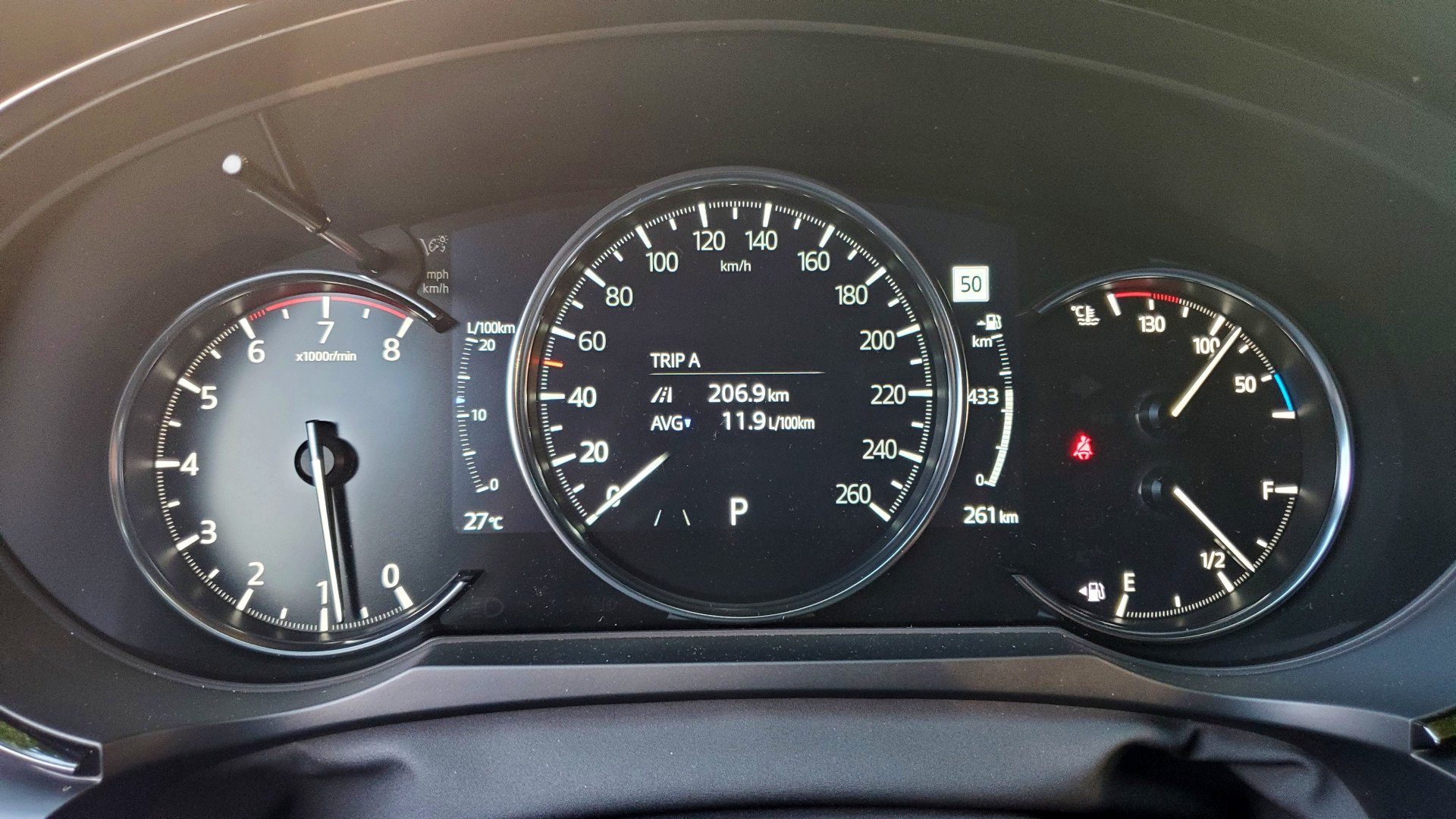 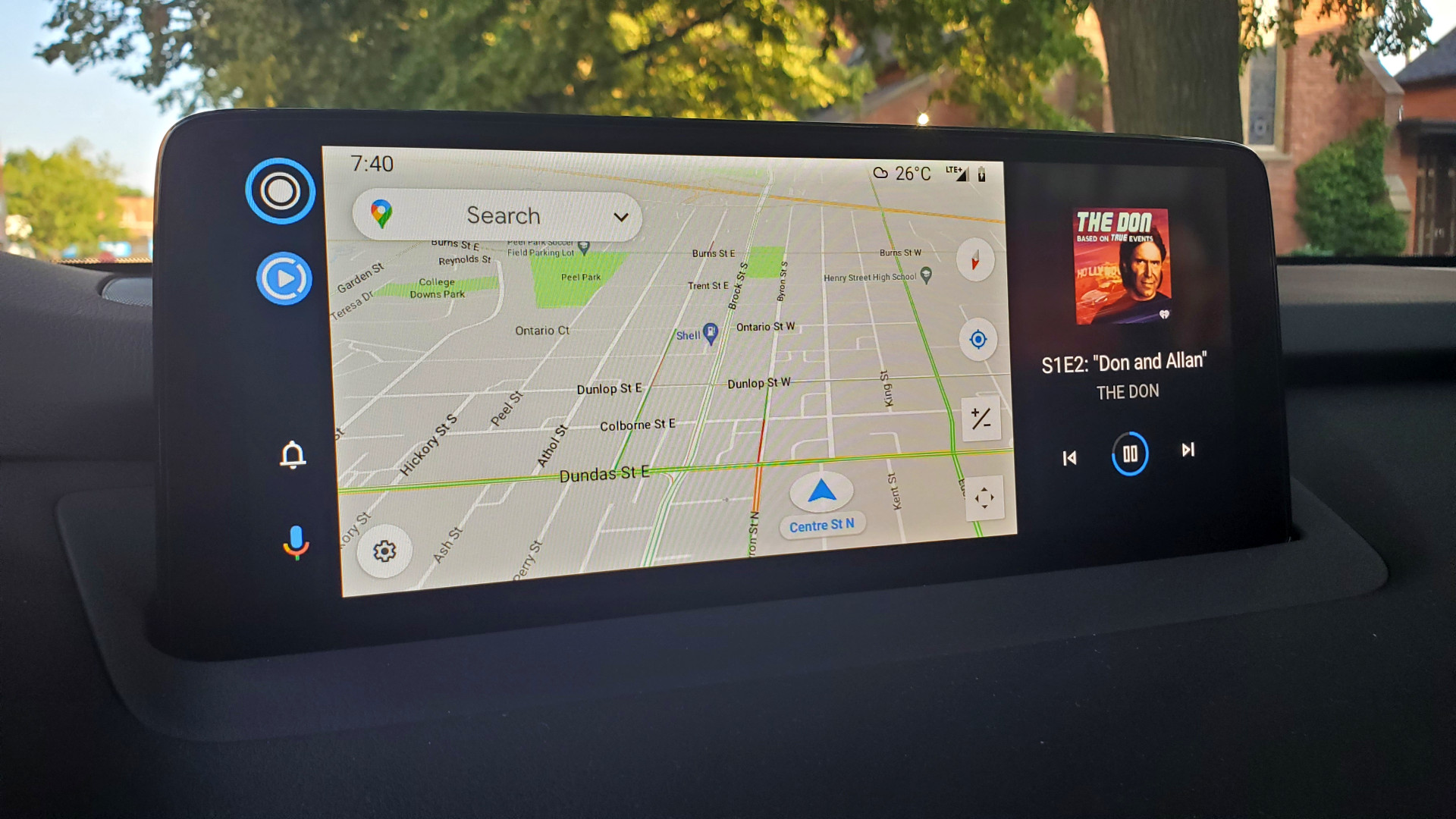 Everything works as one would expect. Even the Android Auto pairing, which can be an adventure in some cars, but not here. Just pair the phone, plug it in and its ready to go, every time. Easy. No wireless connection is available yet, but Mazda will likely add it in due course.

As for the drive and its other SUV credentials, I can summarize by saying they’re mostly what one would expect for a vehicle of this size.

First, the drive. The 2.5-litre SKYACTIV-G turbo four is found in many Mazda products these days, and it delivers respectable, but not neck-snapping, performance. One must wind it up to 5,000 r.p.m. to unlock peak horsepower, but top-end torque starts at just 2,000 r.p.m. (2,500 rpm with 93 octane), which is good for stop light getaways and passing slow 18-wheelers that frequently clog up multiple lanes on the highway. 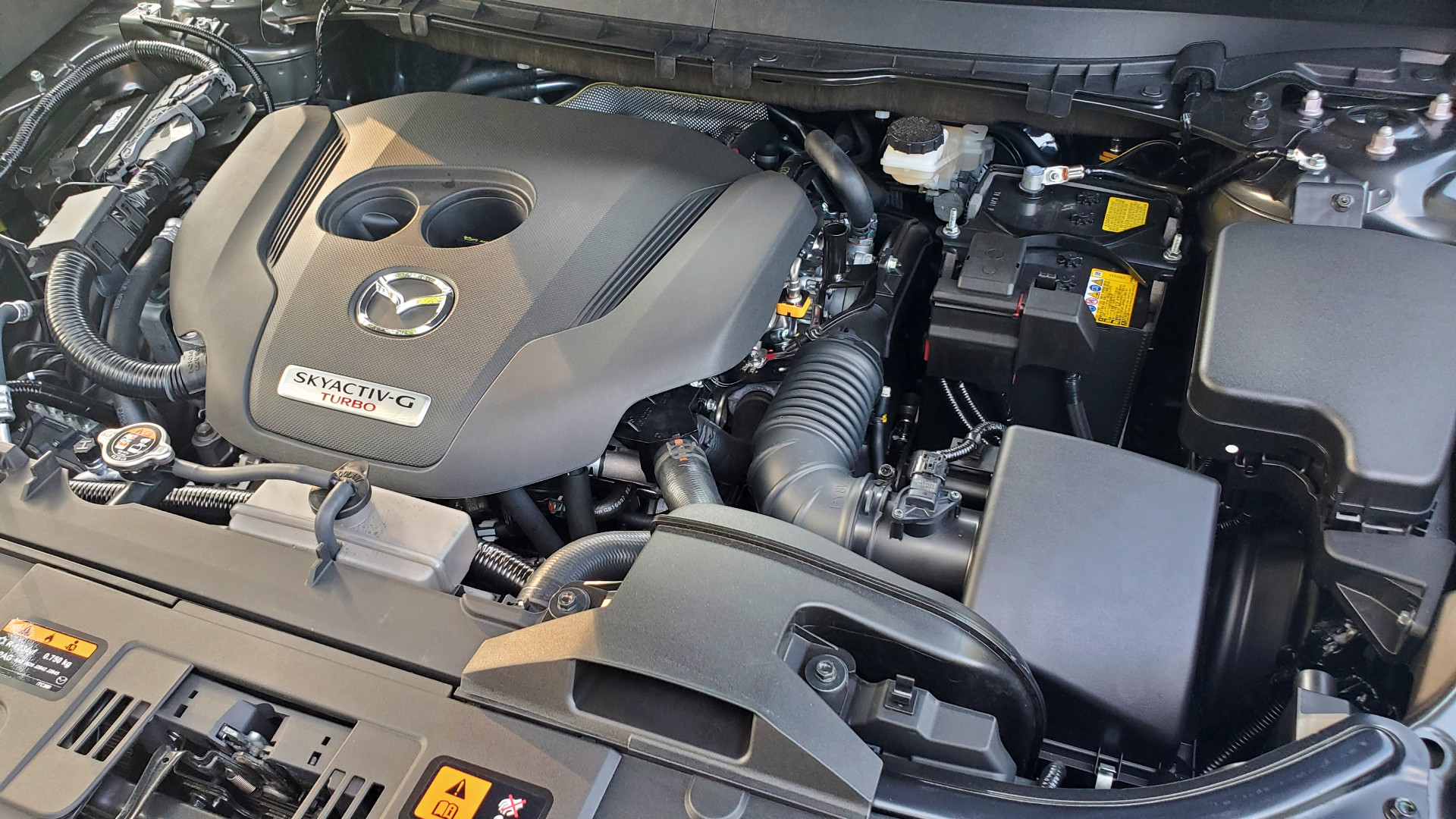 A console-mounted sport button that will bump the revs and wind out rpms before upshifting, along with paddle shifters and a manual mode for the six-speed autobox are there if one wishes to liven things up a bit, but they’re miscast in a three-row, seven-passenger SUV. I fiddled with them a bit, but mostly ignored them, as I suspect most CX-9 owners do. Generally, the ride is comfortable and hushed with good sound suppression, and general handling feels responsive for a big SUV. Performance is not a significant purchase consideration for buyers in this category.

On the utility front, the second row Captain’s Chairs offer comfortable and spacious seating with plenty of room to stretch out. The third row is cramped for adults but is acceptable for short trips and is fine for kids. 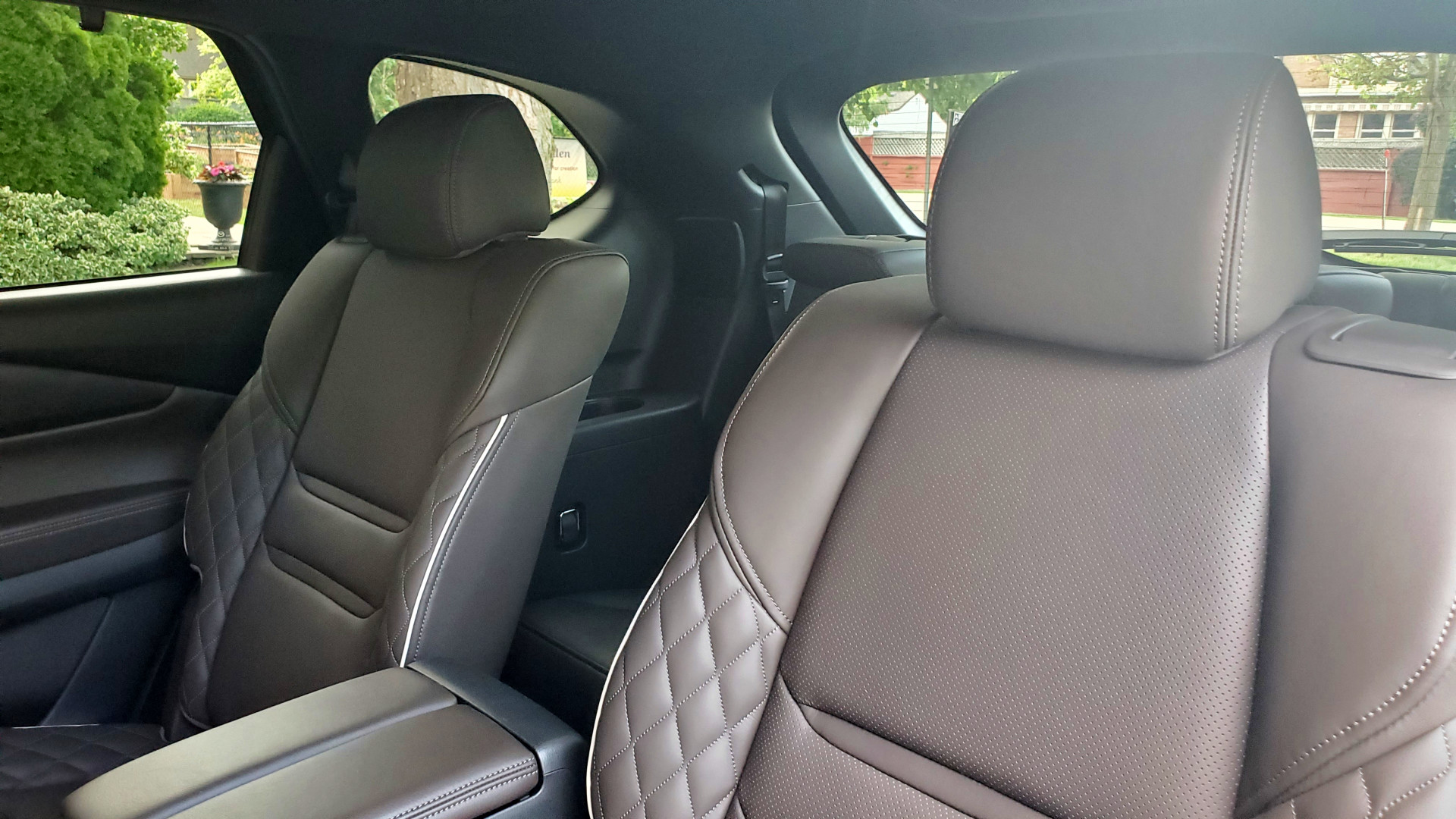 Add all of this to a pile of standard safety kit, and it’s easy to see why the CX-9 holds a lot of appeal. Sales are up 103 percent this year through the second quarter, so clearly consumers agree. So, while Mazda might not have a luxury brand, with offerings like the CX-9 Signature, I’d say it doesn’t need one.