Protection From the Elements As motorcyclists, we run into some very harsh weather, so our riding gear has to be up the challenge.

Six years ago, I rolled into Pointe au Baril, Ont, drenched from head to toe after another trip from B.C. to Ontario. As I rode through the small town, I saw the Haven Restaurant, a name I found fitting for someone who desperately needed refuge from a relentless storm. The server looked me over as I dripped my way into the restaurant. She tossed me two tea towels and told me to undress. While initially shocked, I quickly realized that she was offering to dry my gear while I ate and warmed up. As I sat in my underwear with tea towels wrapped around my waist drinking hot chocolate, I finally understood why we should buy good gear.

So, what constitutes good gear? There are a few obvious factors, such as protection, fit and durability, but I would argue that the most important factor is the ability to protect you from the elements. There’s been a plethora of rumours about waterproof membranes, with the most popular misconception being that all waterproof membranes are the same. I, too, was none the wiser — until I had the chance to visit Gore-Tex headquarters to see Klim gear being tested, and to learn about the technology behind the brand.

Some of the most popular waterproof membranes are Gore-Tex, Sympatex, eVent, Dry Q along with many in-house membranes that are brand-specific, such as Drystar from Alpinestars, or D-Dry from Dainese. With so many options, it’s hard to know if any are better than the others — especially since testing for these membranes isn’t standardized. Companies use custom tests and their own lingo and terms, which makes a true comparison of the waterproofing and breathability next to impossible.

Even a Garbage Bag Can Keep You Dry 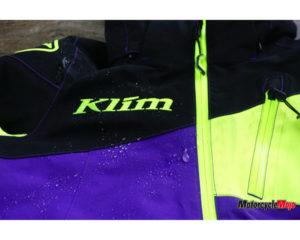 Every membrane on the market today does an adequate job keeping water from penetrating through the garment and onto the skin, but let’s be honest, even a garbage bag can achieve that. What differentiates membranes from one another is the ability to breathe from the inside out while enduring variable weather. Many membranes are breathable, but some don’t allow heavy perspiration to be evaporated through the material, which Gore-Tex happens to be very good at.

Gore-Tex stands by every garment that bears its name throughout the life of the garment. I worked at an outdoor store while going to college when a woman walked in looking for a new waterproof jacket. Although there were many different options, she would only purchase a Gore-Tex rain jacket. When asked why, her answer was simple: She had bought a Gore-Tex jacket 15 years prior, but during the past spring it was no longer keeping…