Noble is back – only it never really went away. I’m inclined to think of Leicestershire’s supercar maker as the antithesis of TVR. With that, there’s plenty of noise, loads of bluster, lots of promises, a huge (unopened) facility and loads of customer demand… but no car. And Noble? It has a small unit in which it has been making M600s since 2010. No fuss, no bother. It’s there if you want it. It’s just that not so many people do.

That’s a shame, because the M600 is a belting car to drive.

At launch, the 650bhp from its twin-turbocharged Yamaha-Volvo-Judd 4.4-litre V8 was a heady amount for a supercar (most of them wouldn’t get out of bed for a number starting with a six these days), while the six-speed manual gearbox and the absence of anti-lock brakes have become bigger anachronisms over time – but not necessarily unappealing ones. 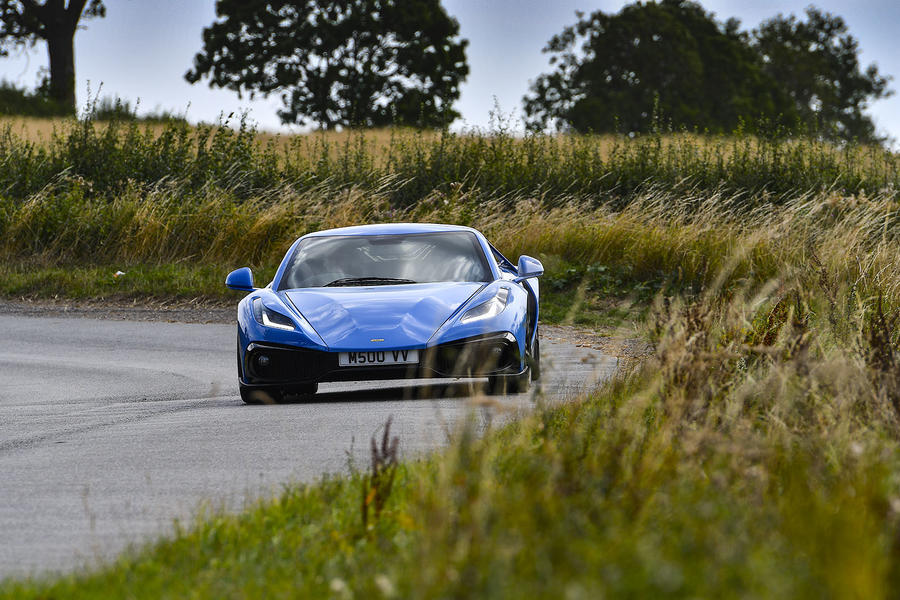 A new Ferrari, wonderful though it is, has an automated hybrid engine, an automated gearbox, an automated limited-slip differential, an automated slip control… You can see where I’m going. For a certain kind of buyer, the kind who mourns the demise of the Lotus Exige, maybe there’s still a niche in that market. Lotus is fast selling out of its relatively straightforward Emira, after all.

Anyway, Noble’s new car, the M500, aims to sit in that niche. It’s more attainable than the M600 that it replaces, less powerful and cheaper to make, so out goes the 4.4-litre V8 that arrived in Leicester in a crate and took a heap of work before it made its way into the car. (Noble has a few left; you can pick one up on eBay.) In comes Ford’s Ecoboost 3.5-litre V6, which is rather easier to turn up to the 506bhp it gets.

Mid-mounted, it drives through a six-speed manual gearbox, which is supplied by Graziano and used to be offered in the Audi R8. Rear-driven, this prototype has an open differential, but customer cars will get a mechanical limited-slip one. There’s still no ABS, although the brakes are more assisted than in the unnervingly heavy-pedalled M600. There’s power steering and there’s a traction control system, but other than that, it’s just you and machine – which feels no bad thing to me.

The machine itself has a steel spaceframe, as per the M600. In fact, it’s about “70% M600”, according to Peter Boutwood, Noble’s managing director, although with lower sills to aid entry and a slightly wider track. The body on top is now glassfibre rather than carbonfibre – heavier but much cheaper to put together. And there are two seats inside, plus a pretty accommodatingly sized boot at the front.
Digital dials, air-con, a stereo and a reversing camera: that’s your lot.

This prototype has quite a heavy body, on account of it being made with crude moulds (although fit and finish is actually pretty good); Noble is still productionising the M500 and seeing where weight can come out of it. As a result, it weighs around 1400kg in its current form, but Boutwood is targeting a number in the 1200kg range. (The M600 tipped Autocar’s road test scales at 1305kg even when fully fuelled, so it’s an intrinsically light set-up.)

Settling inside is like being dropped into a cocoon of Alcantara – an atmosphere that I rather like. The pedals are slightly offset to the left and the steering wheel, not quite round, is fairly small. But the pedals themselves are perfectly spaced, and even though the brake has a bigger servo, middle-pedal feel is still strong.

And get this: there’s this little slot next to the steering wheel, into which you put the key to hold it securely, and then you turn it and the car starts! It’s amazing. So simple.
This could catch on. 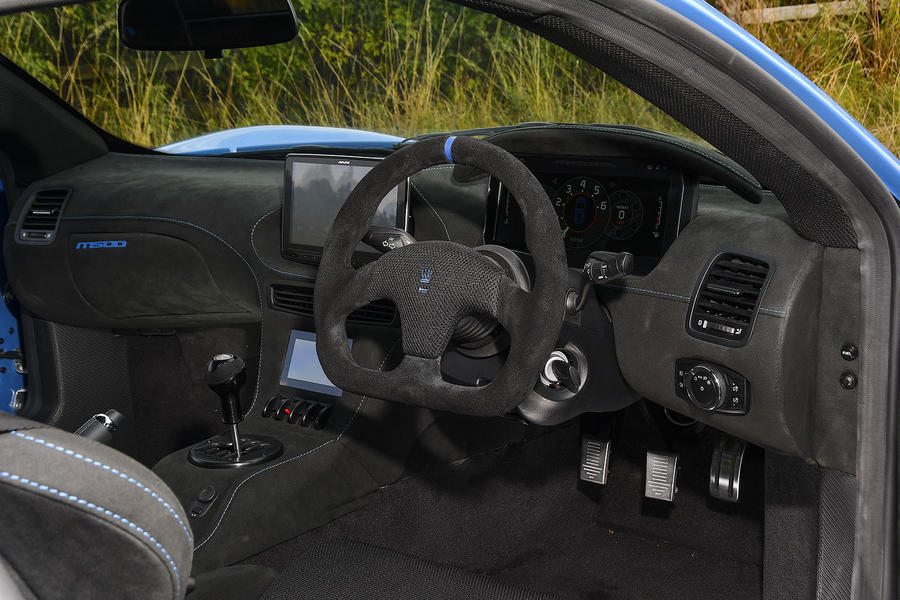 I meet the M500 at the factory for our road test. Inside Noble’s unit, the V6 braps to a noisy, powerful idle, but it has an easy throttle response from low revs and the clutch has a smooth take-up. The gearshift is medium-weighted, fairly short of throw and exceptionally positive, drawing itself home within its deliberate metal gates (slightly sharp edges on the strakes, watch your thumb). The steering is relatively light at low speeds and we’re rolling.

Rolling very smoothly, too, I have to say. The suspension set-up is as per the M600, with Eibach springs and Bilstein dampers, which is no bad thing. It always rode exceptionally well and had terrific body control, and that never goes out of fashion, does it?

The steering rack, meanwhile, has been changed since the M600’s days. This new one, sourced from the Audi A4, is around 2.6 turns lock to lock, but on the road it keeps all of the things that made the M6oo’s so good. It has a benign response and feel, weighting up nicely as cornering forces build and giving you plenty of clues as to what the front wheels are up to but with no unwanted kickback.
If there is an issue, it’s that the low-speed over-assistance drops away markedly bang on 30mph in a too-noticeable step. Noble knows it too and will either dial back the low-speed assistance, up the higher speed assistance, or extend and smooth the transition. But this isn’t much of a gripe.

Our route takes us to another throwback: Bruntingthorpe Proving Ground, which closed its doors to magazine testers a couple of years ago, although makers of cars and, more frequently, motorbikes still pound down its runway. Having completed around 1000 road test miles, this is the first time the M500 has seen a test track, and after a brief sighter with an engineer monitoring the temperatures, I’m told to give it everything along the main straight.

It may be over its intended weight and down on power from the M600, but there’s still genuine urgency here. The V6 has a notable step in urge at around 3500rpm and it rips around to its 7000rpm hard limiter.

The gearshift is fabulous, stability is great and 150mph comes up without drama before I’m inclined to lean on the brake pedal, whose firmness – and the pedal placement and predictable engine response – means rev-matching on downshifts is utterly natural. I can’t remember the last time a car’s drivetrain felt like it was so on my side.

The M500 turns with a natural agility, too, although this might change with the fitment of a limited-slip diff; and on the passive springs and dampers retained from the M600, it adopts a pleasingly sorted cornering stance. Just the right amount of lean, and deftly controlled. 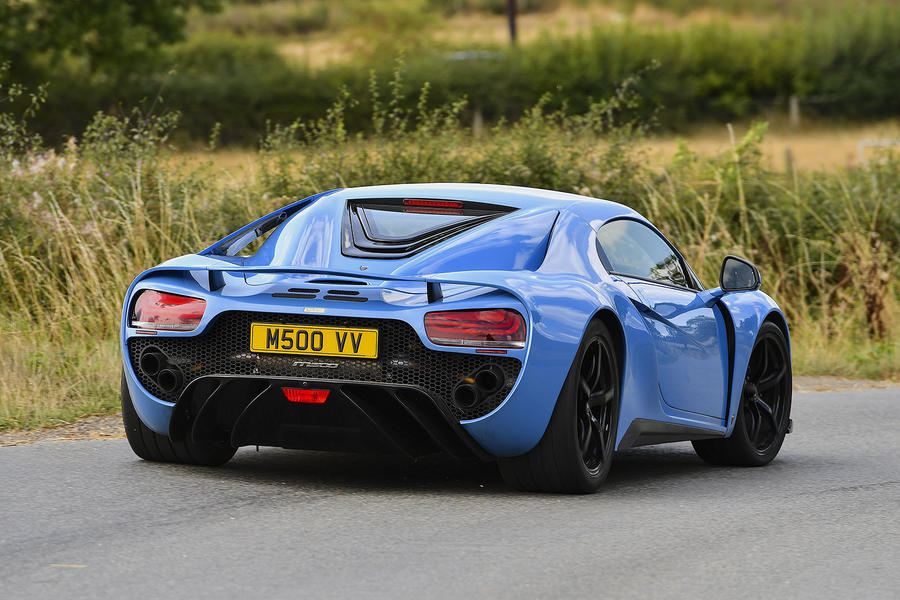 Back on the road, what’s lovely about it is that it’s entertaining at lower speeds, too. Great steering is always great steering, a good gearshift and pedal weights are always rewarding. And the whooshes and whistles when you do get the chance to apply a bit of throttle would take a while to become boring.

It’s close to ready and there’s a lot of promise here. Is the market more prepared for an M500 than it was the M600? Noble is still working on the price. The volatility that affects our daily lives is replicated in parts prices, and it’s even worse if you want to buy only a handful. The target was about £150,000. More than that puts the M500 in difficult territory; less than that and it still has the Lotus Emira and Chevrolet Corvette to worry about. But Noble’s sales targets are small and the car’s abilities are tall.

I can’t give a star rating until it’s finished and priced, but I loved it.