Why we’re running it: To find out if the third generation of the best-selling SUV is still a cut above the growing ranks of Qashqai rivals. 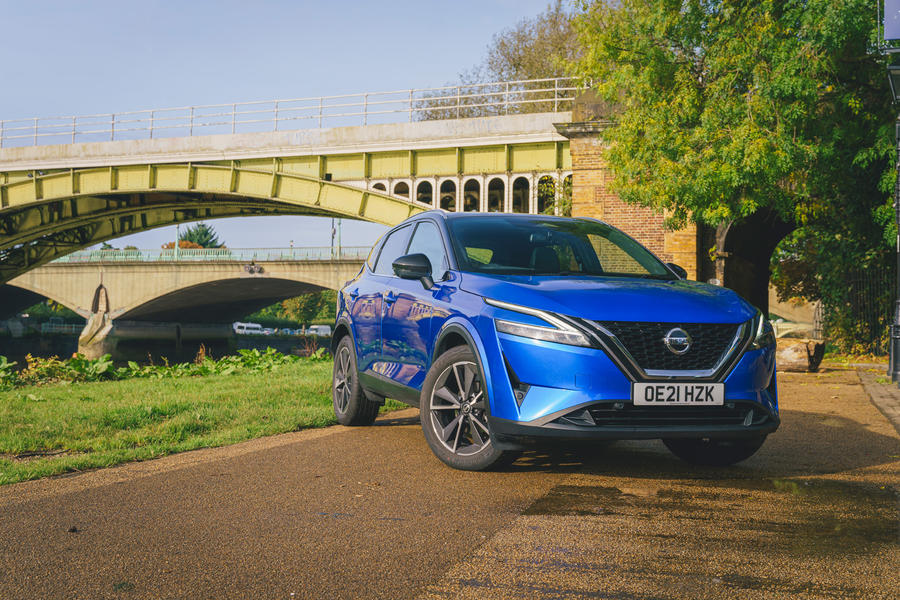 Life with a Nissan Qashqai: Month 2

The Qashqai is remarkably easy to drive in tight spaces such as car parks. It’s aided by the excellent Safety Shield sensors, including the clear all-round reversing camera display. One thing does bug me: our Qashqai is a lovely shade of blue, but the (computer-generated) one that appears on the overhead camera view is a bland shade of grey.

Life with a Nissan Qashqai: Month 1

BEEP BEEP. Our Qashqai’s powered bootlid is really very useful. BEEP BEEP. That said, in order to prevent people getting hit, it emits a shrill BEEP BEEP every time the boot is opened or closed. Yes. BEEP BEEP. Every single BEEPing time. I’m sure it’s useful for preventing accidental bootlid strikes, but it does get really quite annoying. BEEP BEEP.

I’m not usually one for naming cars, but I’ve decided to call our new Nissan Qashqai Ed. As in Sheeran. You see, I reckon the scruffy-haired singer-songwriter and Nissan’s family SUV have quite a lot in common.

For starters, they’re both among Britain’s biggest exports, achieving phenomenal global popularity. And they’ve both used similar tactics to achieve that success. Ed Sheeran basically nicked elements from a handful of genres and repackaged them into a musical form that seemed quite fresh but was actually determinedly mainstream and laser-focused to achieve mass-market musical domination.

Similarly, the Qashqai took edgy elements from four-wheel-drive off-roaders (mostly the high-riding position and rugged styling cues) and appropriated them into an automotive form that seemed quite fresh but was actually determinedly mainstream and laser-focused to achieve mass-market motoring domination. It’s the same trick in two different guises: make a populist mainstream product feel like it’s still a bit radical. 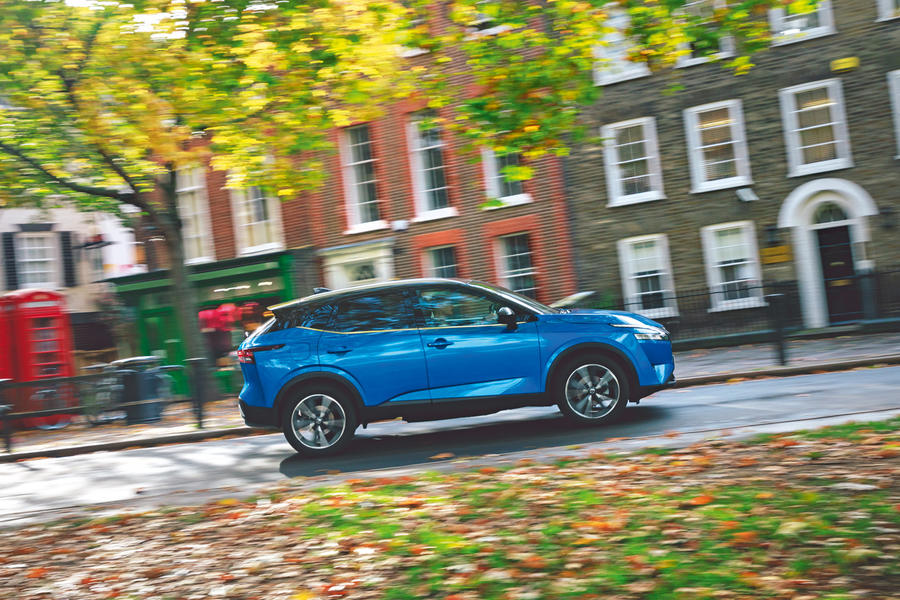 But now both Sheeran and the Qashqai face a challenge: how do you maintain a semblance of edgy cool once you’ve become so successful that you’re at the centre of the mainstream mass market and have a raft of identikit rivals trying to steal your sales with their own twist on your formula?

With this third generation, the Qashqai is entering its sell-out stadium tour phase – and that brings pressure to keep offering the proven hits while also keeping the product fresh.

Let’s face it: while this Qashqai is an entirely new model, it already looks incredibly familiar. That’s partly because I’ve already seen loads on the roads, mere months after it was first launched, but also because it’s still recognisably a Qashqai.

That’s not to say Nissan hasn’t put effort into the exterior design: compared with the previous model, the developments are clear to spot; park it next to an original Qashqai and the progress is remarkable. The sharp creases and lines keep the Qashqai in line with the latest Nissan Juke and give it a bit of an edge without really changing the template. It’s not as radical as Nissan’s Ariya EV, but it’s enough to not feel totally middle-of-the-road bland.

But much like the first single off a new Ed Sheeran album often has a little edge compared with the rest of the tracks, the exterior of the Qashqai is far more distinctive than the interior. In fact, I struggle to remember another car where the disconnect between bold exterior and utterly conventional interior is so stark. 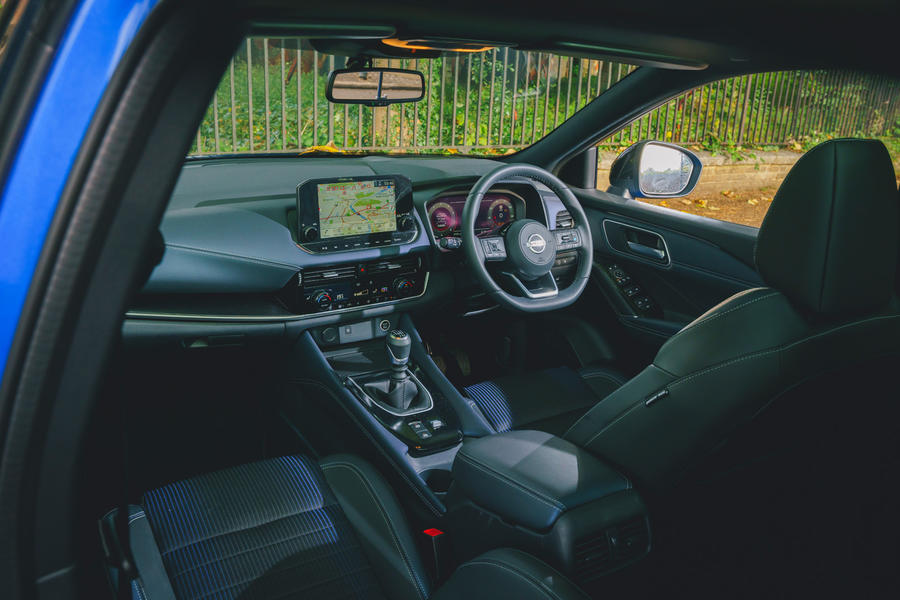 That’s not to say the interior isn’t very pleasant, comfortable, spacious and well laid out: it’s all of those things. It’s just a little… plain. It’s conventional and a bit drab, with a finish that’s perfectly fine but not exceptional. But that plays to the Qashqai’s appeal: it has everything you would need from a family car. It feels plush enough to have a little premium sheen but isn’t so posh that you would be afraid to let the kids go a bit wild in the back. You will be comfortable in there for just about any journey, but it won’t leave you with exciting memories.

The Qashqai range starts with the entry-level Visia trim at £23,985, but we’ve opted for the higher-level Tekna, which comes in at £31,565 (Ed the Qashqai’s smart metallic blue paint with a two-tone black roof adds £1145 to that price).

The extra spend nets the sort of comprehensive kit list that should appeal to family SUV buyers, including a 12.3in touchscreen, a head-up display, a digital dash, extra USB ports, 19in tyres and a raft of additional driver assistance systems and sensors. There’s an electric boot door and the spacious luggage area has very useful floor panels that make that space more usable.

Really, it offers everything you need in a perfectly nice, functional package. Having just switched out of a Volkswagen Golf GTI with its slick infotainment, the Qashqai’s touchscreen system feels a little clunky and counterintuitive – but then again, unlike with the Golf’s, it doesn’t feel glitchy or irritating. 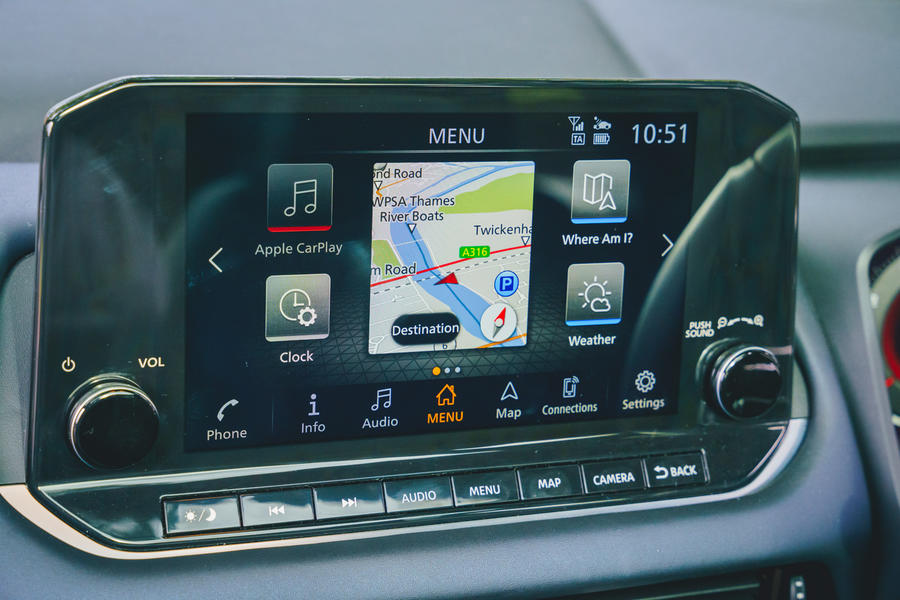 At the moment, the Qashqai is offered in the UK only with a 1.3-litre petrol engine with two power outputs (a full hybrid option is coming soon and Nissan has ditched all of the diesel powertrains). We’ve gone for the more powerful 156bhp version and chosen the six-speed manual gearbox over the CVT.

When we subjected the Qashqai to Autocar’s extensive road test, that powertrain was the only element of the car that really “frustrated”, with the engine and gearbox not feeling particularly well matched. That certainly tallies with my experience so far, with the caveat that once I’ve got the Qashqai up to speed, it’s generally smooth, serene and pleasant.

This is certainly no dynamic driver, but then you wouldn’t expect it to be. It’s made for amiably easy motoring so far, whether for short around-town trips or motorway jaunts. Much like with an Ed Sheeran album, even those who desire something more edgy would have to respect how easy the Qashqai is to live with.

I doubt the next few months will prove the Qashqai to be anything other than amiable family transport. What we’re aiming to discover are any hidden depths and character, or if it proves as forgettably inoffensive as any Ed Sheeran album.

How much excitement do you want from your family SUV? In all too many cars, a bit too much ‘excitement’ comes from buggy multimedia systems and wonky ergonomics. The Qashqai has none of that, and there is something to be said for being able to listen to Ed Sheeran in peace, even if I prefer a bit of jazzy improv. 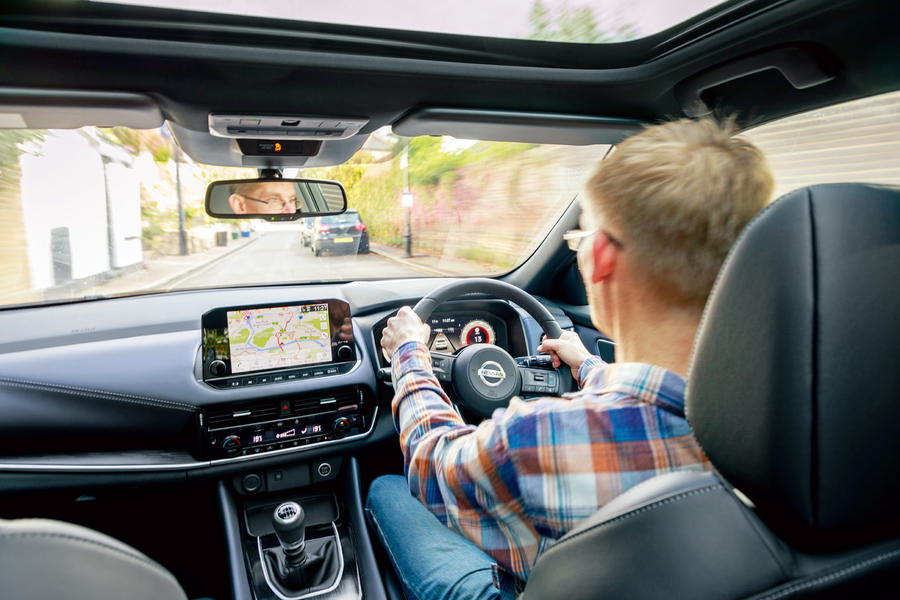