The latest entry into Ferrari’s ultra-exclusive Icona model series is the Daytona SP3, a limited-run mid-engined V12 roadster that pays tribute to one of the company’s best-known motorsport victories.

It’s named in reference to the 1967 24 Hours of Daytona, at which Ferrari achieved a one-two-three finish with its legendary 330 P3/4, 330 P4 and 412 P racers – a highlight of what Ferrari calls “the golden era of closed wheel racing and an enduring reference point for generations of engineers and designers”.

Ferrari will build 599 examples – 100 more units than the Monza duo – priced at €2 million (£1.68m) including taxes. Priority will go to owners of the SP1 and SP2, with deliveries getting underway in late 2022, and unlike those two speedster models – which are not road legal in certain regions due to the lack of a windscreen – Ferrari says the SP3 is street-legal everywhere.

The Daytona SP3 is the first road-going Ferrari to feature a mid-mounted 12-cylinder engine since the LaFerrari hybrid hypercar bowed out in 2018, and with the output of the 6.5-litre naturally aspirated V12 boosted to 829bhp and 514lb ft, it’s the most powerful non-electrified model that Maranello has yet produced.

Engine upgrades over the 812 Competizione extend to a modified intake and exhaust (for an “astonishing soundtrack”), lightweight titanium conrods, reduced-friction piston pins and a lighter, rebalanced crankshaft.

Mated to a quicker-shifting version of the 812 Competizione’s seven-speed automatic gearbox, the V12 promises a “torque curve that rises rapidly” all the way up to its 9500rpm redline, giving a 0-62mph time of 2.85sec and a top speed of 211mph making the Daytona SP3 the joint-fastest Ferrari road car yet.

The references to 1960s race cars extend beyond the mechanicals, with the Daytona SP3 having a characteristically aerodynamically optimised design that blends elements of Ferrari’s historic designs with cues from current models.

The low-set wraparound windscreen, for example, draws an obvious link to the P3/4, while the “double-crested” front wings nod to sports prototypes like the 512 S, 712 Can-Am and 312 P.

Meanwhile, a moving panel in the centre of the front bumper is a tribute to the pop-up headlights that were once popular on supercars.

The side mirrors sit atop the front wings in another retro-inspired flourish that improves both airflow and visibility, while airboxes integrated into the butterfly doors channel air to the side-mounted radiators. 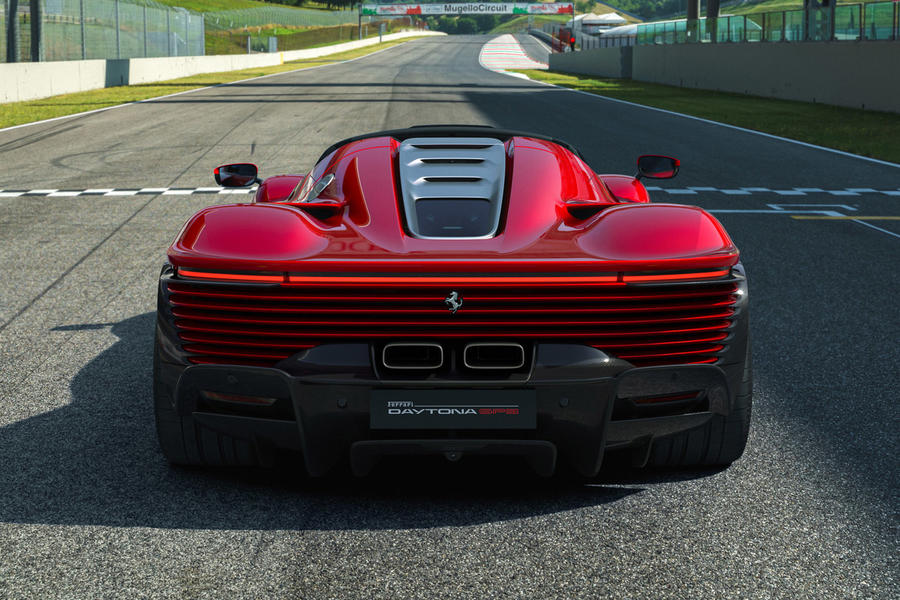 At the rear, the Daytona SP3 is strikingly differentiated from other modern Ferraris by a unique stack of ‘blades’ beneath the wraparound light bar, which is said to lend “a look that’s both futuristic and a nod to signatures from Ferrari’s DNA”.

Ferrari says the Daytona SP3 is the most aerodynamically efficient road car that it has yet built without the aid of active aerodynamic elements.

The retro-futuristic design theme continues inside the cabin, elements of which are modelled on previous race cars but which aims to provide refinement on a par with a typical modern grand tourer.

The seats are integrated into the bodyshell, rather than mounted directly on the chassis, as in classic racing prototypes, but Ferrari has aimed to provide a similarly “snug” driving environment.

The driver and passenger sit lower and more reclined than in any other road-going Ferrari (the firm even compares the position to a single-seater’s), meaning the car is just 1142mm tall, and thus drag is reduced. 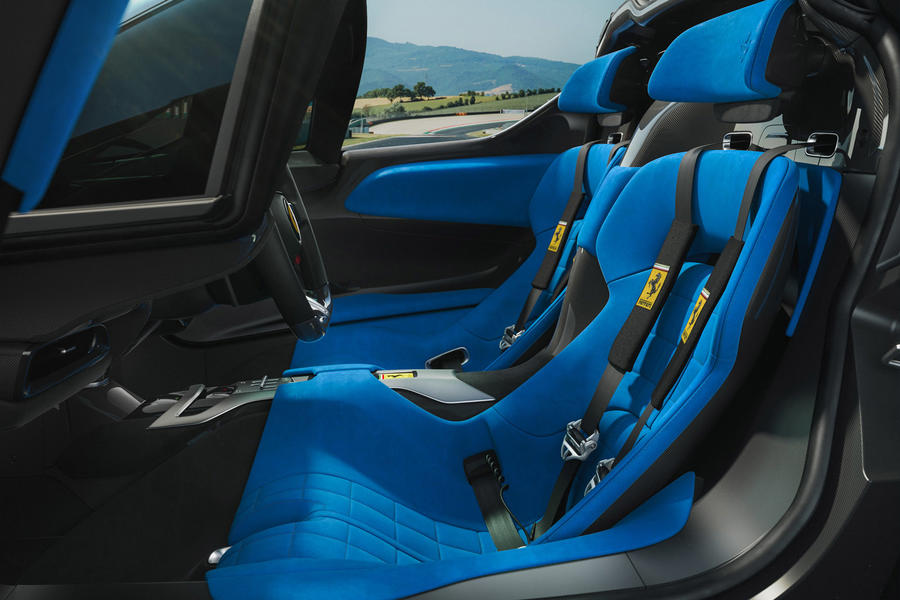 With lightweight composite materials used for the shell, chassis and certain bodywork elements, the Daytona SP3 weighs only 1485kg dry, giving it a power-to-weight ratio of 558bhp per tonne, while the mid-engined layout allows optimised weight distribution between the axles.

Inspirations for the Daytona SP3 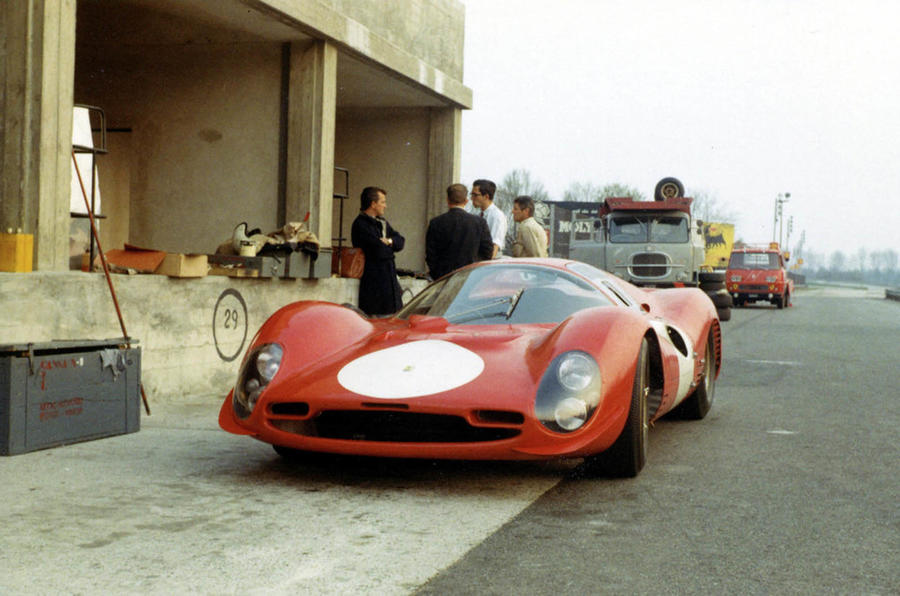 A defining racer of its era, the P3 wrapped its fibreglass tub around a new tubular chassis and ushered in fuel injection. No examples survive in their original configuration. 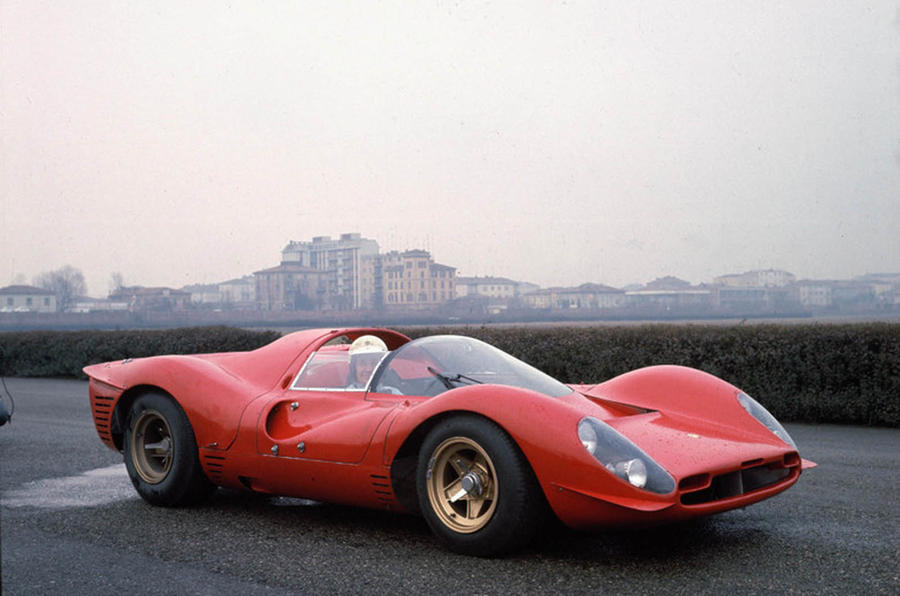 An evolution of the P3, this successful racer was given a heavily revamped V12, a shorter chassis and improved suspension to take on Ford’s Le Mans-winning GT40. 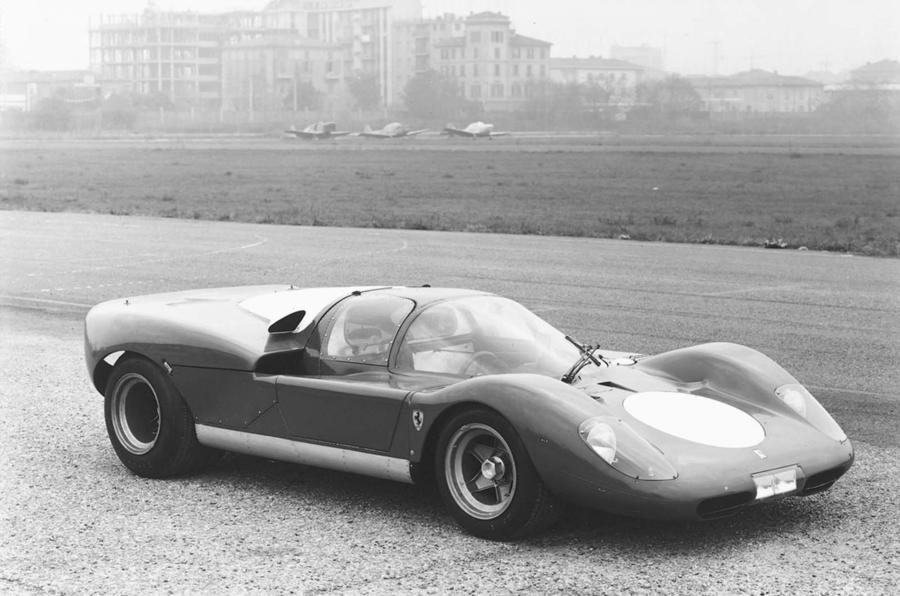 Funded by Fiat’s purchase of a 50% stake in Ferrari, the 512 S was developed in just three months for entry into the World Sports Car Championship’s new Group 5 category