Gordon Murray Automotive has sold all 100 planned examples of its second supercar, a “more practical” stablemate to the three-seat, V12-powered T50 fan-car flagship that it revealed in August 2020.

The firm says orders have been taken from around the world for the £1.37m T33 coupé, around a week after it was revealed. First customer deliveries will get under way in 2024.

The T33, which is built on an all-new carbon-aluminium monocoque chassis, is slightly longer than the T50 and its cabin is designed for two occupants. The car uses a specially adapted version of GMA’s Cosworth-designed 3.9-litre V12 engine with even more low-speed torque but a slightly lower rev limit of 11,100rpm, compared with 12,000rpm in the T50.

Further preserving the T50’s status as GMA’s flagship, the T33 uses newly developed passive underbody aerodynamic principles to deliver aero downforce as speeds rise, rather than the T50’s innovative fan system, which works at any speed.

The T33 weighs about 100kg more than the T50 at the kerb, and its price shaves £1m off that of its senior sibling.

“If you can have only one supercar,” said GMA founder and boss Gordon Murray, “the T33 is designed to be the one you should have.” 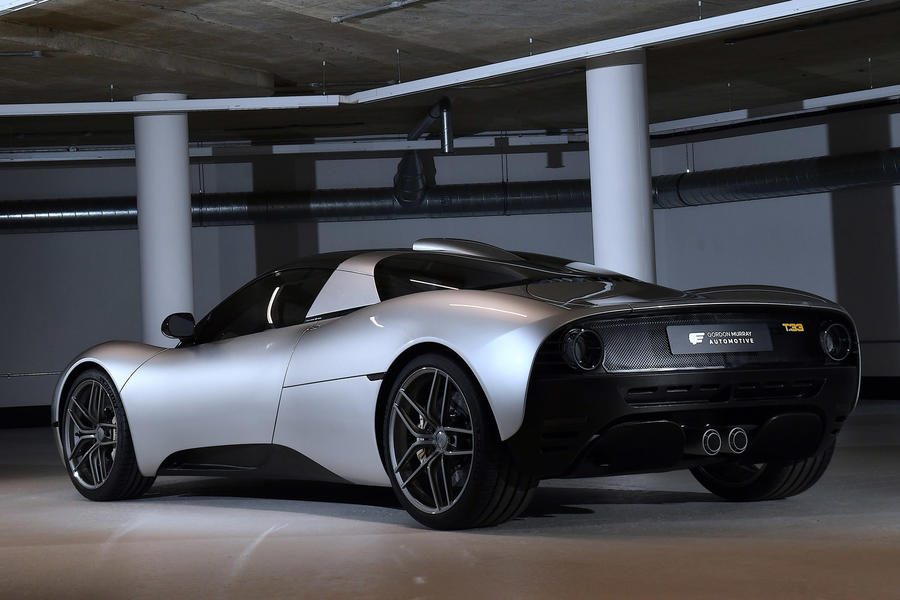 In other ways, the two GMA models are closely related. Both are about the same length as the Porsche 718 Boxster but more than 200kg lighter. Their body proportions are considerably different (the T50’s screen is around 10in further forward to accommodate its centrally seated driver), but they share  carefully created family look. Murray and his design assistant Kevin Richards are responsible for the styling of both, created in-house with a small team of CAD modellers.

Murray has used the T33 to reflect his love of 1960s exotics (notably the Alfa Romeo 33 Stradale, Ferrari Dino 206 SP and Lamborghini Miura) and to create a more graceful, less cluttered shape than contemporary supercars.

Rather than copying his favourites, Murray has identified what he believes are timeless details and forms that will feed his long-term aim of preserving the beauty and relevance of GMA cars in the decades to come.

“I’ve been planning a timeless supercar for a long time, and in the early planning I thought about a 3.3-litre engine for it, too, so I reserved the number 33. And now at last we’re doing it.”

True to its previously announced “never more than 100” principle, GMA will make just 100 examples of the T33 coupé, running initial prototypes this summer and delivering cars from 2024.

Two T33 spin-offs are planned. Murray said they are likely to be a roadster and “some sort of track-specific model” in the vein of the T50S Niki Lauda. 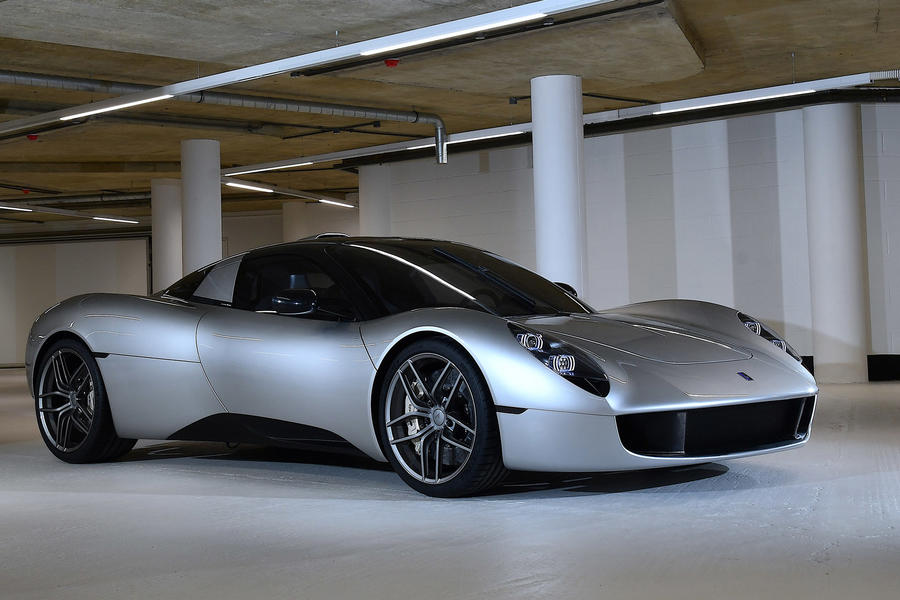 Although its proportions are different and it’s built for two occupants, not three, the T33 follows most of the principles used by the T50 (and before that, the seminal McLaren F1). It has a cleverly packaged and spacious cabin, with occupants protected by a carbonfibre safety cell. Many of the carbonfibre panels have a honeycomb core, and there is a light alloy frame to carry the major loads. There are three luggage compartments: one in the nose and a pannier-like one ahead of each rear wheel. Total luggage space is 280 litres, said Murray – “about the same as in a small hatchback”.

The all-independent coilover suspension components are changed from the T50’s, because the T33’s weight distribution is not the same and its newly patented passive aero architecture (“we learned some important lessons from the T50”) leaves entirely different packaging space under the body.

The double wishbones at the front are carried on an alloy subframe, while those at the rear are mounted directly on the gearbox, with the engine as a “semi-structural” chassis component capable of providing enough compliance to quell refinement issues yet providing the rigidity needed for a suspension mounting.

The steering retains hydraulic power assistance and the wheel and tyre sizes are identical to the T50’s: 19in at the front and 20in at the rear.

Reflecting GMA’s attention to detail, the T33’s engine gets different heads and camshafts and a reconfigured variable valve timing system in line with its slightly different positioning. The standard gearbox is a six-speed manual, but a paddle-shifter is optional. Murray said the T33 will be GMA’s final non-hybrid car and hinted at hybrid and EV projects already well advanced.

It will also be the first car to be built at GMA’s spacious new headquarters just off the M3 in Windlesham, Surrey. The entire run of T50 and T50S models are being built at GMA’s base on the edge of Dunsfold Aerodrome, about 20 miles south, near Guildford. 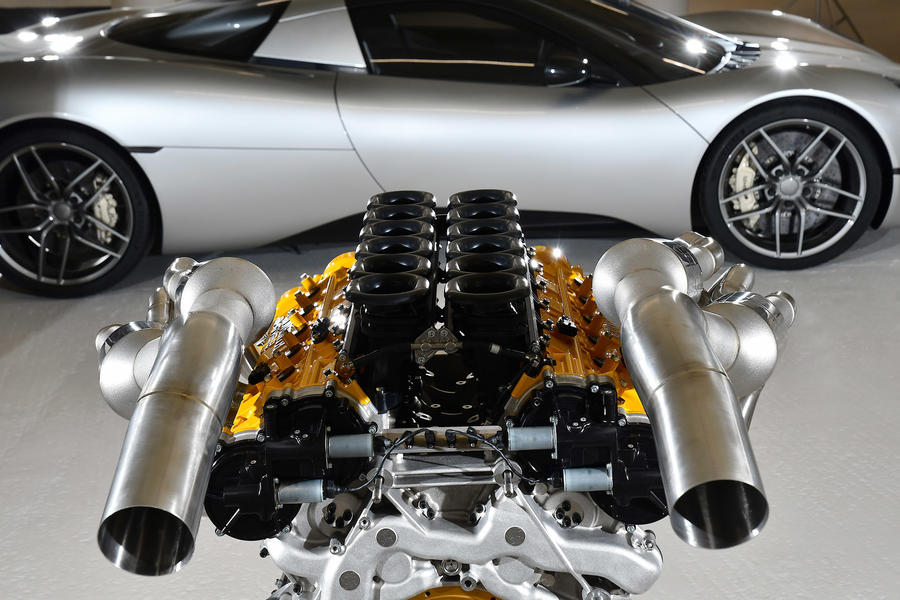 Murray expects the T33 to attract half of its buyers in the US (orders are already being taken), so it will be sold in both left- and right-hand drive. GMA plans to achieve full federal type-approval, rather than depending on the more tenuous ‘show or display’ rules that other manufacturers use in the US.

“For a company like ours, it’s a big decision to spend £28m on federal approval,” said Murray, “but we’re very confident about the car’s compliance, and when we achieve it, in effect we will have two cars in one: a European version and one for the rest of the world. That will make it all worthwhile.”

The T33 is close in size and shape to the T50, so what’s its special purpose?

“It’s designed to be a somewhat more practical car than the T50, which will always be our flagship. If you can have only one supercar, the T33 is designed to be the one you should have.

“Our research among potential owners already shows us that around 85% will use their cars for daily driving, which is why we’ve given it practical stuff like good luggage capacity and a long cruising range.” 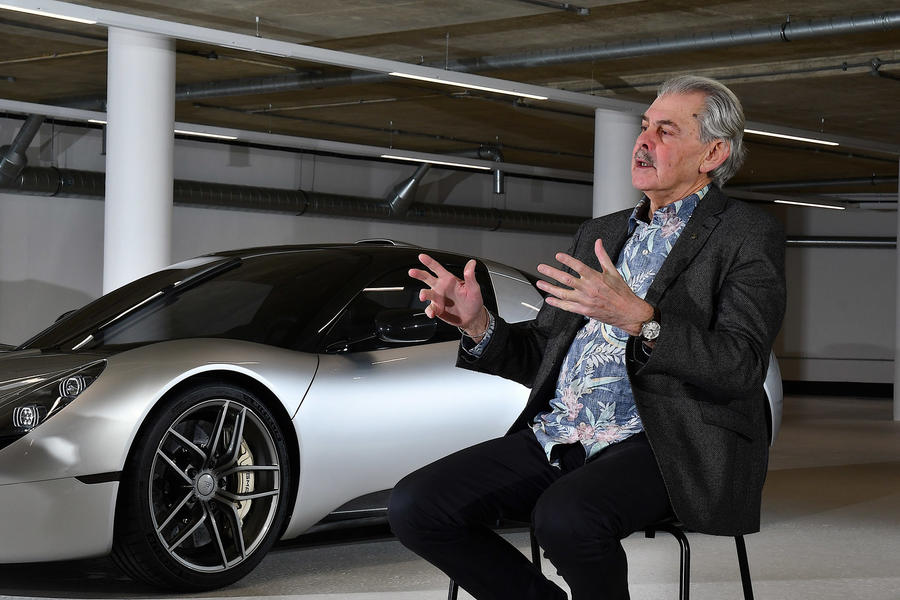 You haven’t yet shown the T33’s interior. What’s it like?

The T33 adheres very much to Gordon Murray Design principles: exquisite but very simple, driver-focused design. It will be all analogue: no touchscreens, top-quality machined-aluminium rotary controls for all important functions and every switch floodlit, as backlighting is confusing. We’re not even having steering column stalks, because we prefer thumb buttons on the steering wheel spokes.”

You’ve said the T33 is influenced by your favourite 1960s cars. Is there a risk of copying them too closely?

“I don’t think so. The T33 and T50 together have a genuine GMA family look that’s quite different from others. But many of the greatest 1960s and 1970s cars were styled by engineers who weren’t as governed by rules as we are today. They could do the purest, most efficient designs. If we’re clever, we can do it too.”

Do you think modern supercar design has become overcomplicated?

“Yes. Many modern cars are brutal and cluttered, as if the designers are just trying too hard. What’s the point in covering your car with louvres, wings, fins and ducts if you don’t need them? We’re going the opposite way, and our buyers tell us they like it.”

You’ve made very little of the T33’s performance figures, even though they’re bound to be fantastic. Why is that?

“We aren’t bothering to chase trends or headline performance figures with our cars. I really don’t care whether the car’s 0-60mph time is 2.9 or 3.1sec or if it will do 210 or 215mph. Our buyers don’t care either. We’re not chasing sales and we never will. The beauty of simplicity is the key to our cars.”

The T33 will be the first car to be manufactured at Gordon Murray Automotive’s new global headquarters in Windlesham, Surrey – a 54- acre site formerly occupied by the defunct Kamcorp engineering consultancy.

Murray has a £50 million plan to revitalise and extend its buildings to house car manufacturing facilities, a heritage garage, a complex of engineering and design offices and a tech campus to introduce recruits into the high-tech car business. New customers will also visit the site to configure, view and collect their cars.

There’s even space and planning permission for a small test track (around 700 metres) needed for shaking down newly built cars.

GMA expects to create around 100 new jobs at Windlesham once conversion of the 130,000sq ft complex, comprising three buildings, is finished, hopefully by 2024.

However, it plans to retain its existing buildings at Dunsfold, near Guildford, as the manufacturing base for its T50 and T50S flagships.