While safety standards and testing results can be confusing, you might be surprised at how protective riding jeans actually are.

All motorcycle protective gear is, by definition, a compromise. The accommodation in question is simple, and the trade-off is always some form of balance between protection and comfort. No one (sane at least) gets dressed up in a Dainese one-piece to ride three blocks to 7/11 for a pack of smokes. Likewise, it’s been a long time since a bathing suit was considered adequate protection — stand up and take a bow, Rollie Free — during a land speed record run on the Bonneville salt flats. Proponents of ATGATT — All The Gear, All The Time — may claim that safety should be the only criteria that counts when it comes to protective riding gear but, in fact, the number of motorcyclists still riding around in obviously inadequate riding gear — not to mention shorts and sandals! — is all the proof you need that there’s more to convincing bikers to don armour than just life and limb. 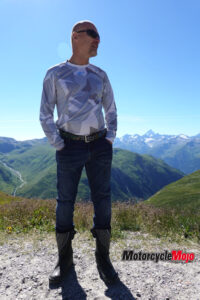 Nowhere is that balance between comfort and protection more obvious than in riding jeans. After all, the entire raison d’etre for the riding jean — the market for which has exploded in the last five years — is to add a little comfort, not to mention fashion, to an otherwise uncomfortable motorcycle riding pant. Leather sweats and textiles itch, which is why the Holy Grail for motorcycle riding garment in recent years has been some variant of the decades-old denim. A number of solutions have been proposed, including different materials — everything from Kevlar to something called ultra-high-molecular-weight polyethylene (UHMWPE) — in different arrangements. The good news is that all, to obviously varying degrees, have proven more protective than jeans of old. A modern riding jean, again to various degrees, can be a fairly protective garment, capable of both absorbing impact and resisting abrasion.

The bad news is that it’s very difficult to actually tell how protective the pair of pants you plan on buying really is. In point of fact, the very standards that we’ve long trusted — the now-ubiquitous European CE standards put in place to allow motorcyclists to judge the protective ability of the garment they might be shopping for — are now such a source of confusion that it’s hard for anyone not a materials engineer to determine which jeans actually offers the necessary protection and which don’t. What does it mean when a jean is said to be able to “slide” for eight seconds? Can we believe a manufacturer when they claim their jeans have better abrasion resistance than leather? And how much protection does an AAA rating translate into when you’re sliding down the road on your ass?

The reason for the confusion is that there are actually two CE rating systems — the older EN13595 regs and the newer, as of 2018, EN17092 standards. While both purport to set minimum standards for protective ability, how they rate the garments…

This article was originally published by Motorcyclemojo.com. Read the original article here.
Share
Facebook
Twitter
Pinterest
WhatsApp
Previous articleThings to look out for when buying a used van for work
Next articleBonhams: Stunning Motorcycle History Chapter Up for Auction