We’ve already driven the flagship Trofeo model with its Maserati MC20 supercar-derived 523bhp V6, so now it’s the turn of the more modest GT model with its 2.0-litre four-cylinder petrol. Essentially this is the bread-and-butter version, the car that will likely to attract most of those younger, family-orientated buyers that previously wouldn’t have considered one of the Modense maker’s machines.

So, a four-cylinder Maserati? Yep, you read that right. In the Italian brand’s push towards electrification it has adopted a down-sized 48V mild-hybrid four pot motor that delivers 296bhp as tested here, or 325bhp (both have the same 332lb ft torque figure) in the next rung up the Grecale ladder, the Modena. Purists will be even more alarmed to learn that this engine isn’t even an in-house design, but the same GME T4 unit that’s shared with the Alfa Romeo Stelvio and Jeep Wrangler.

Yet while the thought of a fairly humble engine sitting behind the iconic, trident-emblazoned grille of a Maserati might seem at odds with the firm’s rich sports car heritage, the numbers certainly make encouraging reading. For instance, it claims the GT will dust the 0-62mph sprint in just 5.6 seconds, which isn’t too tardy for a machine that tips the scales at a portly 1870kg. What’s more, it contends that the extra mid-range muscle of that torque-filling mild hybrid motor gives the Grecale the feel of a bigger six-cylinder motor. Hmmmmm…. 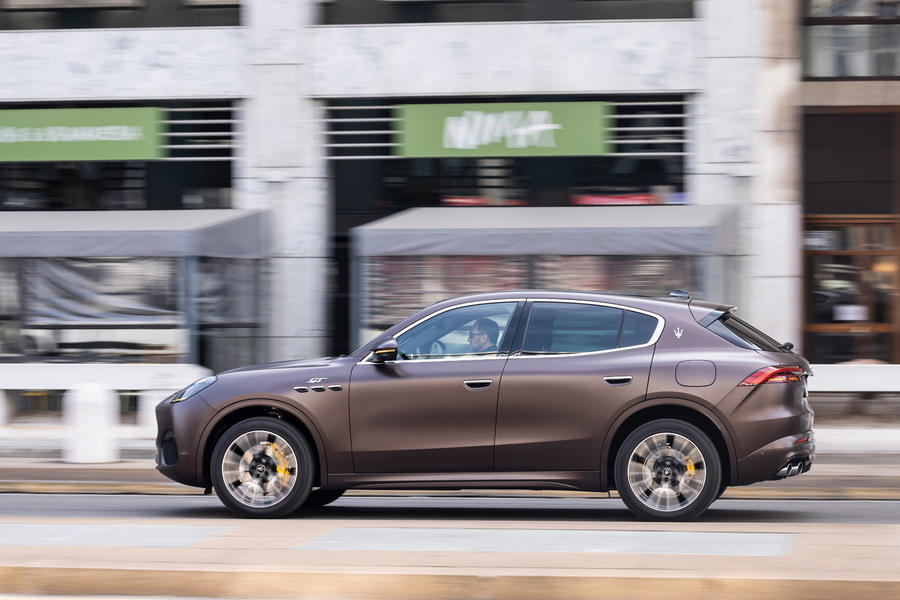 Prod the starter and any thoughts of a creamy smooth six-cylinder motor will evaporate fairly quickly. The 2.0-litre starts with a raspy flourish, but quickly settles down to a rather anodyne four-cylinder drone, which is rather at odds with the flamboyance of the rest of the car. More importantly, given Maserati’s rich history of serving up motors that sing it’s hard not to be disappointed by the GT’s rather montone aural signature.

Still, while it’ll never go down as an internal combustion icon, there’s no doubt the four-cylinder unit is effective, particularly in the mid-range where that electrical assistance gives a welcome helping hand. In fact, on give-and-take roads the GT doesn’t feel that much slower than the Trofeo, responding more quickly and decisively to initial throttle applications as the electric motor provides instant muscle where the ultimately more energetic V6 needs more revs before it gets into its stride.

Crucially, it feels like it’s got the legs of the entry-level four-cylinder Macan, which uses the Volkswagen Group’s venerable EA888 turbocharged 2.0-litre that goes without any electrical assistance. It’s certainly got it beaten for on paper running costs, the hybrid assistance resulting in a 32.5mpg return at the pumps and CO2 emissions of 198g/km.

Twist the wheel-mounted drive mode selector into Sport and you get a sharper throttle response and a fruiter note from the exhaust. The rasping and gurgling back beat is still far from the glorious mechanical symphony you’d expect from a Maserati, while the prominent flutter on full bore upshifts is almost identical to a Volkswagen Golf R’s, but the sound is at least authentic and not some algorithmically augmented simulation pumped through the audio system.

The engine is aided by the standard eight-speed ZF automatic, which serves-up smooth and timely shifts when left to its own devices, even if the manual changes aren’t as crisp and quick as a Porsche PDK’s. That said, the long alumimum paddle-shifters look and feel great, it’s just a shame they make it tricky to reach the stalks for the wipers and headlamps.

Our car was fitted with the optional air springs in place of the standard steel coils, and as with the Trofeo it makes the GT a bit of a mixed bag dynamically. There’s an underlying softness to the set-up that in combination with excellent suppression of wind and road noise makes the Grecale a great long distance cruiser. It wafts over big, smoothly surfaced undulations with the suppleness of a luxury limousine, with just the right amount of cosseting float.

Yet hit a deep pothole or a sharper imperfection and the Maserati’s serenity is shattered by a jolt and some surprising noises-off from the suspension. Over typically pock-marked and scarred urban surfaces the Grecale thumps and bumps its way along, the sudden movements of the large 20-inch alloys struggling to be contained effectively or quietly.

The same blend of finesse and frustration awaits through a series of corners, although in the GT’s defence it was fitted with winter tyres that were being made to work hard in a balmy 24 degree centigrade on bone-dry tarmac. The steering is crisp and accurate and the Grecale turns in with surprising eagerness for such a high-riding heavyweight, while in the most aggressive driver settings the four-wheel drive system is eager to send torque rearward, helping to get the car rotated quickly on the throttle and corner exit. There’s some fun to be had here.

Better still, initial body movements are well-checked, the Maserati feeling taut and composed as you sling it this way and that. Yet encounter some testing mid-corner bumps and the Grecale’s resolve weakens, its control on proceedings slackening as the resulting looseness in the damping betrays the car’s hefty mass. Even in Sport it can’t compete with the Macan for cast iron composure when hustling hard. It’s a shame, because there’s a nicely balanced and nimble machine lurking within the Maserati’s DNA.

Take things easier and, grabby brakes aside, the Grecale makes a decent case for itself as a family-sized upmarket SUV. It’s big inside for starters (those in the back will thank you more than if you owned a Macan), and while the battery from the hybrid kit reduces the Trofeo’s healthy 570-litre boot capacity to 535-litres, it’s still large enough for most needs.

It feels special inside as well, with lashings of soft leather and an array of classy looking and surprisingly intuitive touchscreens. Yet there’s a sense that the quality is a little skin deep in places, with some of the switchgear operating with gritty resistance rather than the well-oiled precision you’d expect at this point. Moreover, rough stretches of road revealed the odd squeak and rattle suggested that  quality control still isn’t up to Zuffenhausen levels of snuff. 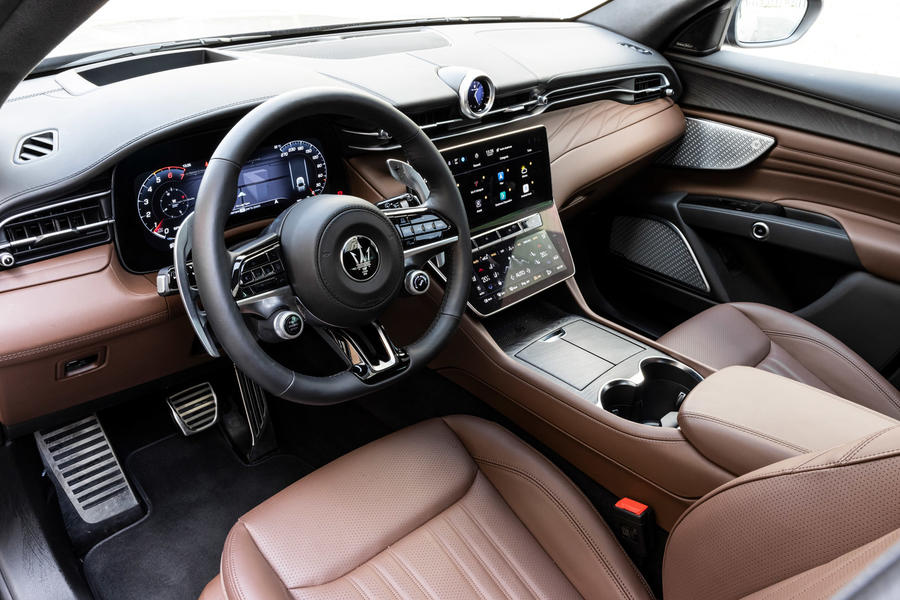 If you’re on the lookout for an upmarket SUV that is family-friendly, has a touch of style and can get a wriggle-on when you’re in a hurry, then the Grecale is not without appeal. Then there’s the mystique of the Maserati badge, which certainly holds some allure alongside the usual premium SUV suspects.

Prices have been announced, but expect this entry-level GT to be pitched at about £60,000, which is a lot for such a big machine powered by a punchy but fairly prosaic four-cylinder engine. It’s certainly a large chunk of change for a car that’s dynamically still a few steps behind that continued class benchmark, the Macan. It’s frustrating, because with a little more development and touch more fine-tuning (not to mention some suitable tyres), the Maserati could be a contender. 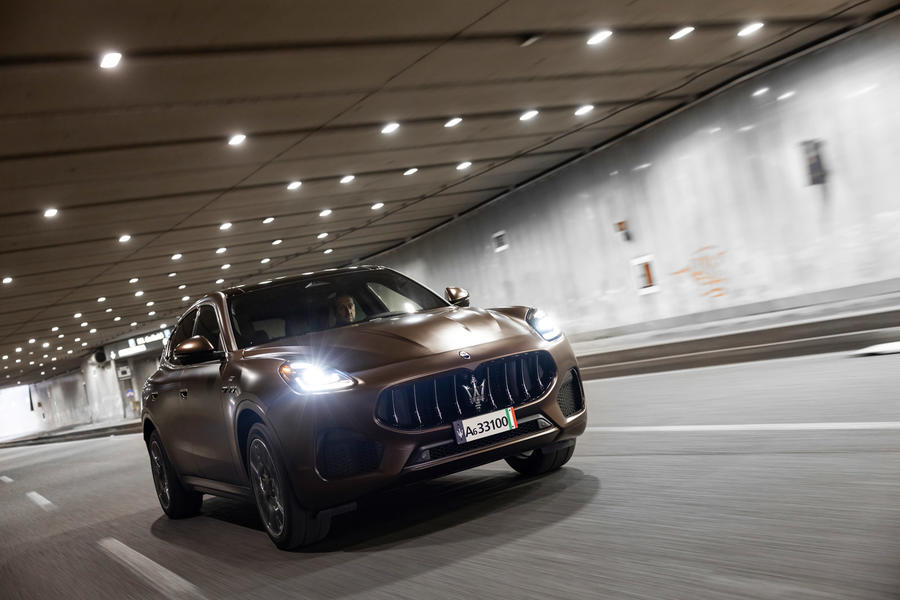