Today we will analyze the fast charging capabilities of the all-new Lucid Air Dream Edition, which was recently tested by our very own Tom Moloughney (see video at the bottom of this post).

The Lucid Air aspires to be the new state-of-the-art EV, with the world’s best charging capabilities, so in the second part of this article, we will compare the results directly with the Tesla Model S Plaid’s fast charging analysis (specifically, with Tom’s test – out of three that we checked).

In the coming days, we would like to make a comparison with a few other models including top Porsche/Audi and Hyundai/Kia models. Stay t for more.

The Lucid Air Dream Edition, with a pre-conditioned battery, was tested at an Electrify America fast-charging station, which is rated at up to 350 kW (compatible with 800 V battery systems).

According to the data obtained from the 0-100% SOC test, we can see that the charging power surges almost immediately after the start – exceeding 200 kW within seconds.

At 90% SOC, the power was at about 50 kW and decreasing quickly, which means that there is not much value in charging to very high SOC levels.

The total energy delivered to the car (according to the Electrify America charger) was 134 kWh. 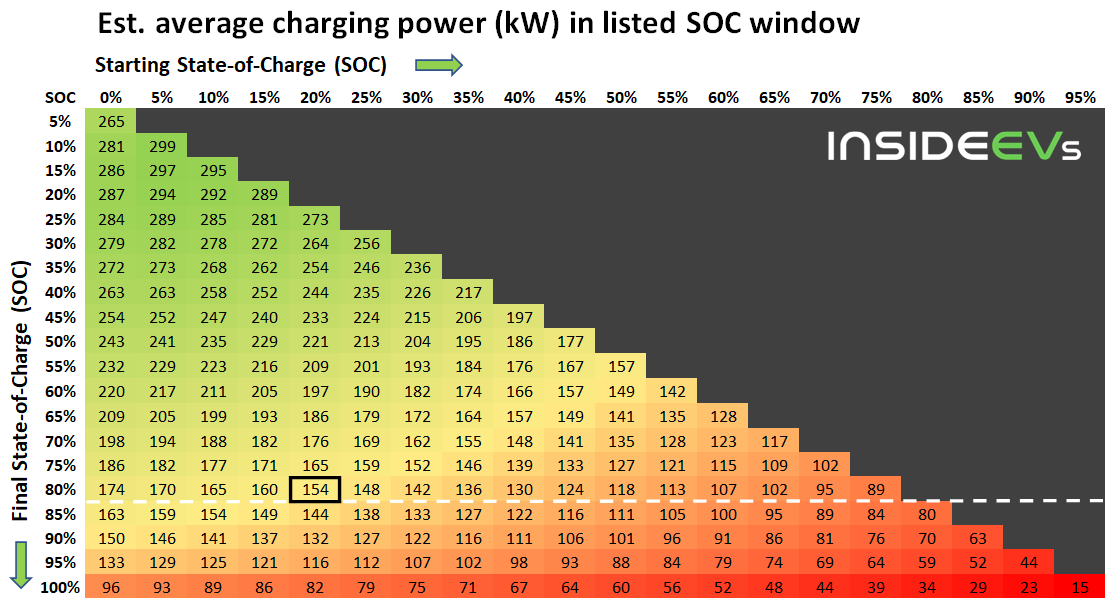 The peak C-rate* – charging power in relation to the total battery capacity of 122 kWh (our guess) – is about 2.5C. The average C-rate when charging from 20% to 80% SOC is 1.3C. Both values are pretty good, but not the highest that we have seen.

In the case of the Lucid Air, at the moment we have only EPA ratings, and we will use the range values for the 19″ wheel version (the base case scenario) – 520 miles.

Those are outstanding results that might be considered the best ever. In perfect conditions and optimum SOC window, one can replenish 100 km (62 miles) of range in just 3 minutes. 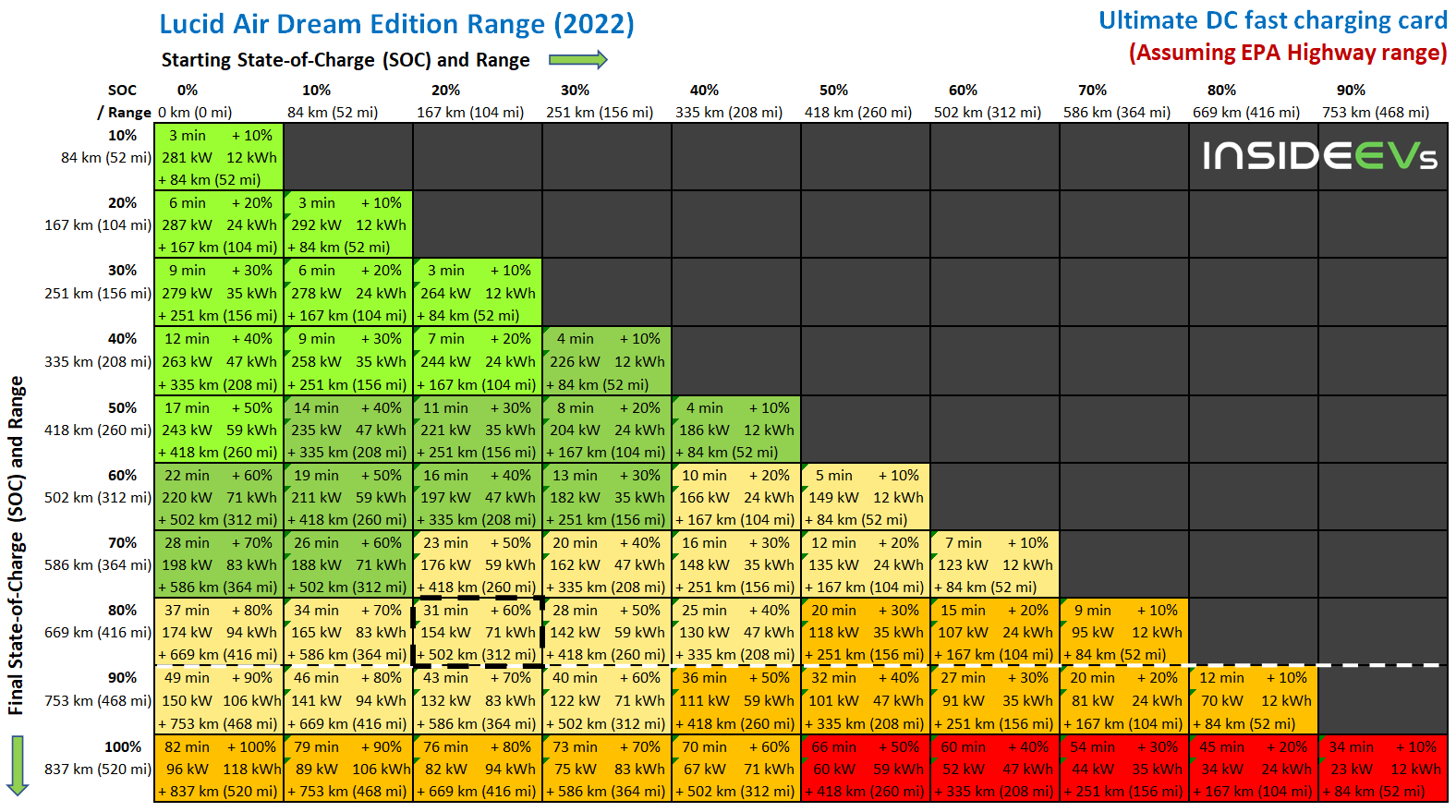 The matrix above, might be helpful from the user perspective, but be aware that it’s just an estimate from a particular test, with measure and calculation uncertainty probably above 5%. On top of that comes variation for individual case – car (version, age/battery state-of-health), charger, ambient and battery temperature, software version and more (including cabin heating/cooling during charging). Another thing is that the charging curve might shift when charging starts at a lower/higher SOC.

Comparisons with other EVs

If we take a look at the raw charging curves, it turns out that the two cars are much closer than one would think.

Lucid Air starts more aggressively and reaches higher levels of roughly 300 kW, while the Tesla Model S was capped at 250 kW (the maximum value of the V3 Superchargers). Tesla has also a smaller battery.

What we can note is a very similar approach to charging: reach a maximum rate initially and then gradually lower it, as required.

It’s interesting that the Tesla Model S with a re-designed battery pack (still with 1865-type cylindrical cells) delivers comparable results (especially after 30% SOC) to the all-new Lucid Air (with 2170-type cylindrical cells and a noticeably bigger pack). The initial difference is also related to the maximum output from the Supercharger. 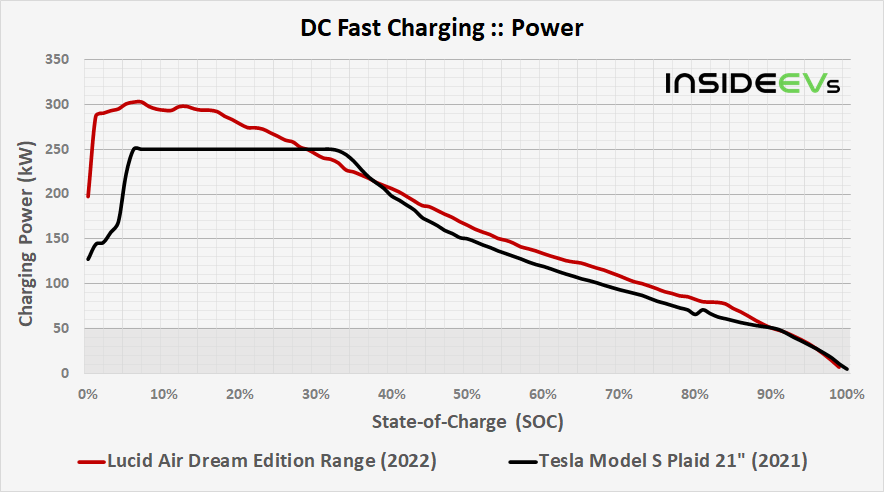 Here is another surprise. Time-wise, the Tesla Model S actually achieves 80% SOC faster than the Lucid Air: 25 minutes to 31 minutes.

It’s not intuitive, but that is because of the difference in the battery capacity – Lucid charges at higher power but has also more energy to recharge.

*The starting points were adjusted to the lowest common SOC. 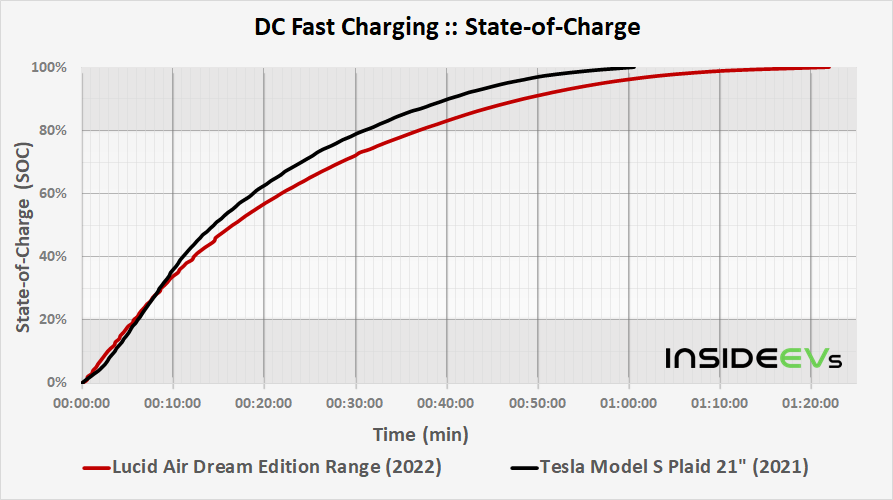 A quick look at the table:

Finally, the C-rate comparison, which reveals to us what is going on. Tesla has a very good C-rate, which means that it charges faster than Lucid, considering the battery capacity (more kW per kWh). And it’s true for the majority of the charging curve. 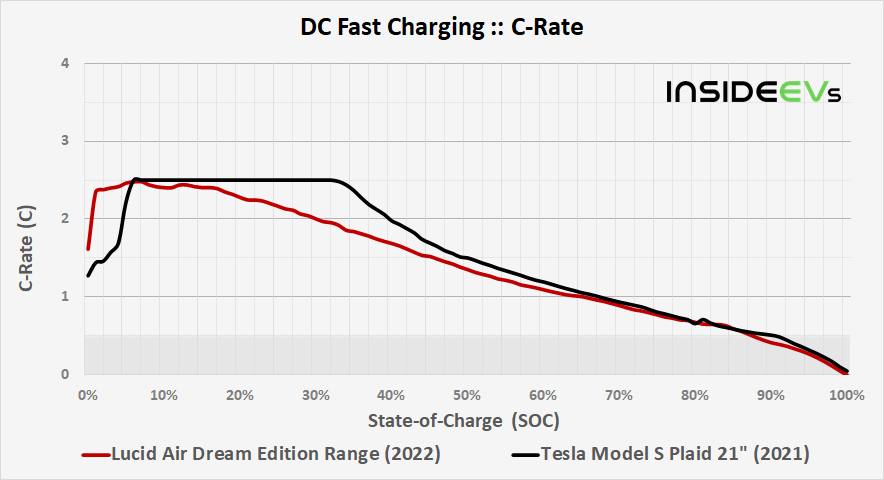 Now, the most important metric from a consumer perspective – the range replenishing rate. We will use the EPA Highway range as a base (the only available common rating for the two).

The chart reveals that the Lucid Air has a significant advantage over the Tesla Model S. It’s slightly more efficient and additionally charges at higher power (more kW). The combined effect of those two factors is more miles replenished per time unit. 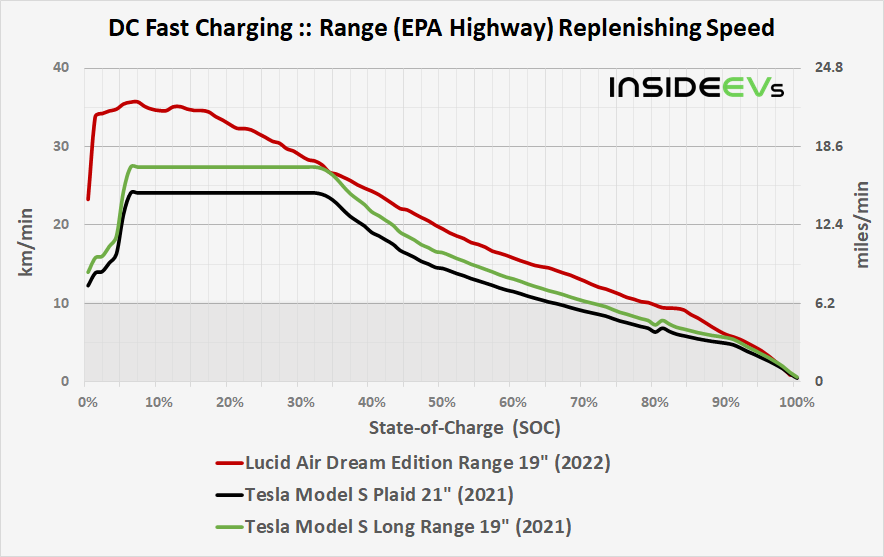 It means that the Lucid Air replenishes range some 20% quicker. Because it has a bigger battery, one can also stay longer, and replenish more range to reach a further destination.

The conclusion from the DC fast charging test of the 2022 Lucid Air Dream Edition Range is that it’s most likely the fastest charging electric car on the market.

It takes 31 minutes to recharge from 20% to 80% SOC, but at low SOC, the first 100 miles can be replenished in just several minutes.

We guess that there might be a potential for further improvements, as the C-rate is not the highest.

In comparison with the refreshed Tesla Model S, we noted that there is a big advantage in terms of range replenishing speed.

However, the Tesla Model S appears to be a very strong contender. Its battery charges at a higher C-rate (higher power compared to the total capacity). Not only that, the charging power is comparable between 30% and 100% SOC, with only a small advantage for the Lucid Air, which is equipped with a bigger battery. It’s an engineering masterpiece, especially since Tesla still uses the 1865-type cylindrical format.

Another thing is that the Tesla Model S reaches certain state-of-charge (SOC) levels faster because it has a smaller battery.

Those are interesting findings because many thought that Lucid Air would win by a fair margin in all metrics. However, most of its advantage comes from having a bigger battery (more kWh), rather than efficiency (it has its important part too, of course), and that the V3 Superchargers are capped at 250 kW.

* Some values on the charts are estimated from the data source.

** Temperature of the battery cells might highly negatively affect charging capabilities. We don’t have data about temperatures of the battery at the beginning and during the charging process. In cold or hot weather, as well as after driving very dynamically, charging power might be significantly lower than shown on the charts (in extreme cases charging might be impossible until the battery temperature will not return to an acceptable level).

This article was originally published by Insideevs.com. Read the original article here.
Share
Facebook
Twitter
Pinterest
WhatsApp
Previous articleMitsubishi Monitors Concept’s Cabin With Infrared And Radio Waves
Next articleLooking for a Way to Soup Up Your Car? Go Electric.