Supercar manufacturer Koenigsegg has developed an electric motor and an electric vehicle drive unit that it hopes will be used in a number of third-party applications as well as its own cars.

The electric motor, named the ‘Quark’, is made out of 300M steel and produces the equivalent of 335bhp and 442lb ft.

Koenigsegg claims the 28.5kg motor has the best power-to-weight ratio in the industry.

The firm says it wants the motor to be used in a variety of applications, including electric vehicle powertrains, aerospace and the marine industry.

A version of the motor is set to be used in the Koenigsegg Gemera, which uses three of them mated to a twin-turbocharged 2.0-litre three-cylinder engine for a total output of 1700bhp. 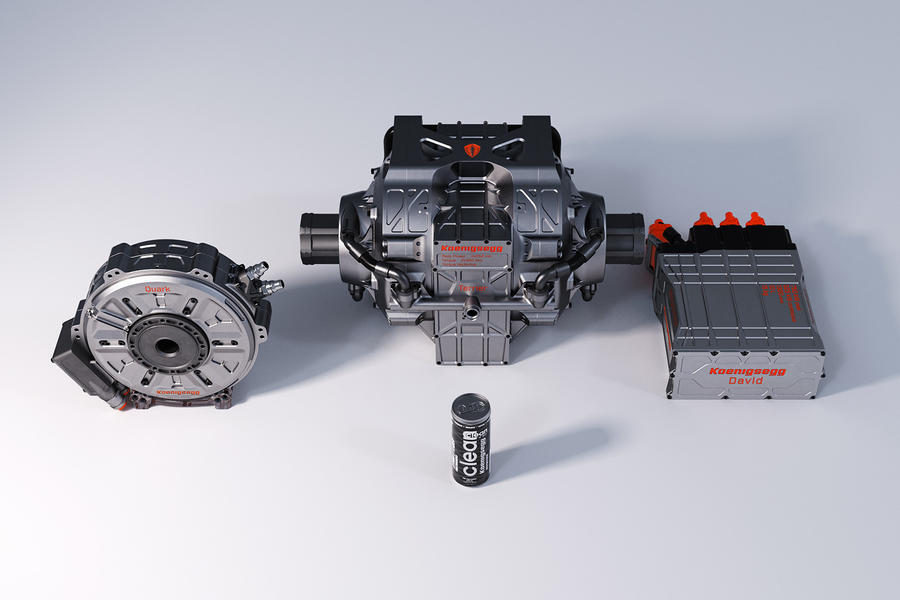 “The Quark is unique in its high efficiency in combination with its class-leading torque-to-power-to-rpm-to-weight matrix,” said CEO Christian von Koenigsegg.

“This means, when using the Quark in applications such as marine, aircraft or VTOL [vertical take-off and landing aircraft], there is no need for a step-down transmission. Instead, direct drive can be achieved, as the RPM of the motor is right from the get-go.”

The drive unit – named ‘Terrier’ due to its “small, energetic and fearless demeanour”, according to Koenigsegg – is described by the firm as “the most power/torque-dense torque-vectoring drive unit in the EV industry”.

The lightweight drive unit weighs 85kg and produces the equivalent of 670bhp and 811lb ft. Its design means the unit can be bolted to the monocoque or chassis of a vehicle directly, allowing for “design, engineering and luxury accommodations previously not possible”, while removing the requirement of added subframes or weight.

Koenigsegg said: “Small high-revving motors can have higher peak power-to-weight ratio, but they need transmissions in most applications in order to get to the desired output rpm and torque, causing energy loss and adding weight and complexity to do the same job. So any benefit in size is lost.

“In other cases, like the Terrier application, the transmissions can be reduced in size and complexity compared to higher-revving, less-torque-dense motors, which is also a big win. I guess we’re trying to reach the edge of optimal in-betweenness.”

Koenigsegg did not say when we can expect to see the motor or driveline in any upcoming applications, but has said more information will be revealed soon.