How to drift: The tricks of going sideways

An S-chassis Nissan rounds the corner with the length of its heavily modified body wildly perpendicular to the apex.

Its highly strung gazillion-horsepower engine is screaming in furious protest as it bounces off the limiter, while plumes of white smoke erupt from the rear wheels with the ferocity of a full-on pyroclastic flow. A metre or so from its rear bumper, a similarly modified Mazda RX-7 matches the leader’s absurd angle of attack, and in tandem the two cars link slide after dramatic slide as they make their way around the tight, technical circuit.

But despite the cacophony of thrashed engines and screeching tyres, their movements are all beautifully composed and coordinated. In fact, they’re so graceful you might even find yourself wondering just how hard the process of getting a car to behave in such a manner can really be.

Having been guilty of harbouring similar thoughts in the past, I was keen to get to the bottom of this drifting malarkey once and for all. And so, brimmed with the sort of misplaced confidence that can only come from spending a bit too much time watching drift videos on YouTube, I arrived at Drift Limits Motorsport Academy in Hertfordshire ready to get stuck in.

The plan was simple. Instructor Bill and I would head out in a second-generation Mazda MX-5 to cover the basics, before switching things up in a more powerful Nissan 350Z later in the morning. Everything going well, I’d have progressed from total drift novice to someone who could link a few slides together with something resembling coherency by the end of the session. 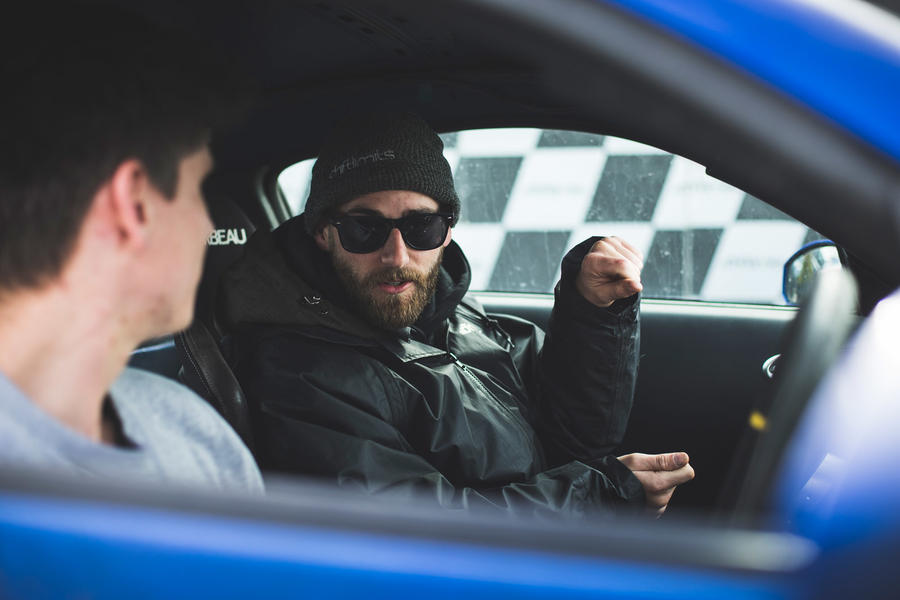 Now, although the cars we’d be using were by no means modified to the extent of those used in competitive drifting, they weren’t entirely stock. Their rear diffs had been welded, and a few suspension tweaks had been implemented to make them that much easier to slide and to rein in unwanted body roll. The dedicated track we’d be using was also lubricated with a high-tech mixture of vegetable oil and water because, y’know, we newbies need as much of a leg-up as possible.

After a quick sighting lap to learn the circuit’s layout, Bill ran me through the basics. In its simplest form, there are three main phases. First is the initiation, where you lift off the throttle to move the car’s weight forward, turn in with about a quarter lock on, and quickly stab and release the accelerator to initiate the slide. Then you need to catch the drift with a more sustained application of gas. Finally, you maintain the drift through to corner exit by balancing throttle and steering inputs. All the while, you need to let the car do as much of the work for you as possible. Sounds easy, right?

The reality is, of course, entirely different. Learning the steps is one thing. Actually executing them successfully is another challenge altogether. So rather unsurprisingly, my first few attempts at getting the Mazda out of shape resulted in me spinning almost immediately, which felt rather embarrassing given the low speeds we were travelling at.

I’d accelerate up to a mighty 23mph on corner approach, lift off the gas a car’s length or two ahead of the entry point, feel the weight shift gently forward off the rear axle, turn the wheel, feel the car begin to slowly rotate, stab and release the throttle to amplify the slide, miss the catch by applying either too much or too little throttle, and then either end up straightening up or facing the opposite direction. Frustrating. The MX-5’s short wheelbase made it feel particularly snappy, while my novice’s desire to be actively doing something with my hands and feet only exacerbated the inevitability of my failure.

Bill was incredibly patient. He gently reminded me of the importance of letting the car work for you and emphasised the need for patience when it comes to making your inputs. In fact, allowing for the momentary pauses between each step so you can really feel what the car is doing and tune into how its balance is shifting beneath you is just as important as the steps themselves.

After more practice, I’d become comfortable with the initiation phase and was set to tackle the catch. Here, the pause between the initial stab of throttle and its reapplication is crucial, but after a few more failures, I got my timing right and managed to power on through to the corner exit. Although there’s still a lot to think about in terms of balancing steering and throttle inputs, this final phase feels a lot more intuitive than the catch. 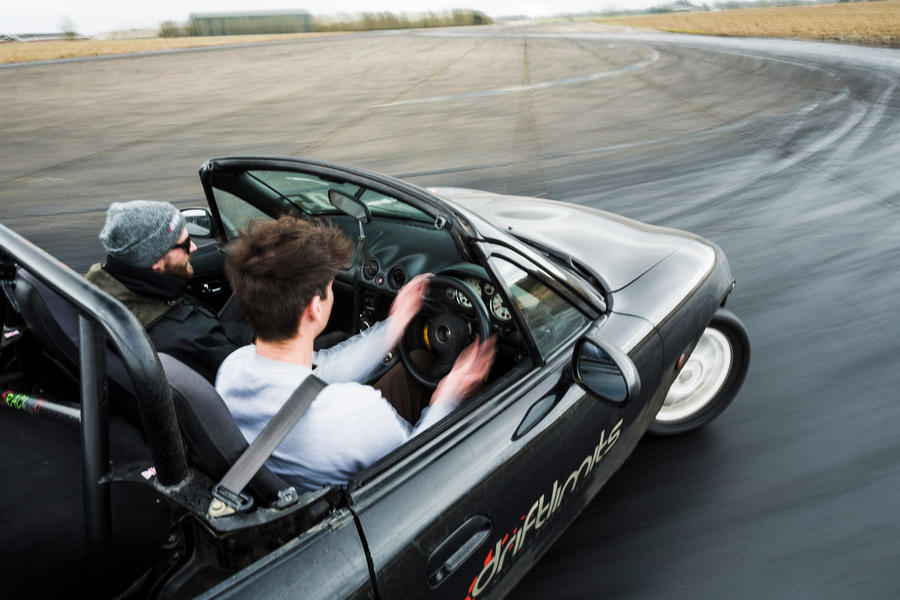 A quick break to let everything stew, and then it was back out in the 350Z to try to link a few slides together. Immediately, it felt like an easier car to manage. Its longer wheelbase made its rotational movement that much more progressive and easier to read, and the process of initiating, catching and then holding a drift came more naturally.

Now it was time to link a few slides together. This is the point where drifting really becomes an art form and also where you really need to ignore the urge to follow a classic racing line. The closer you get to the track extremities, the more room you have to initiate your next drift.

Timing and patience are once again key here. You need to stay on the power for as long as possible at the end of the previous drift, before lifting to begin the initiation process over again. The car swings like a pendulum beneath you, you catch it, and transition into the next drift.

I nearly completed an entire lap by the end of the session. Nearly. Given where I’d started out, the fact that I’d got this far in just a few hours was immensely satisfying and a testament to Bill’s impeccable tuition and saint-like patience. Nonetheless, he reckons it takes roughly four years or so of solid practice to be able to drift seamlessly like a pro.

But once you’re there, he said, the scope of your imagination really becomes the only limitation. Those drivers who aren’t afraid to be creative, who are willing to push the boundaries of their abilities and experiment, are easily the most exciting to watch. Just like any artist, really. 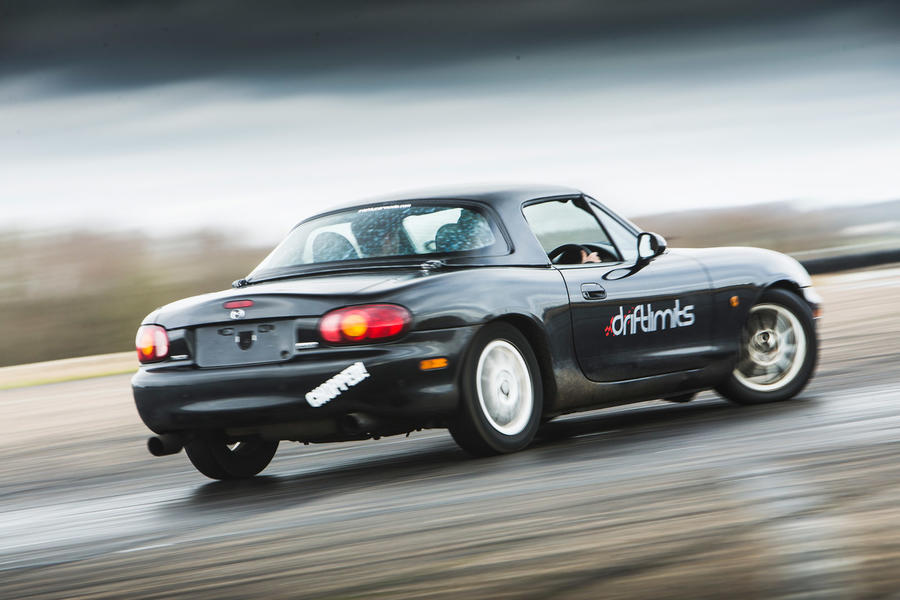 Autocar snapper Luc Lacey had a hand in setting up Drift Limits in 2011. In the beginning, it was just him and founder Jonny Barden, a Mk2 MX-5 and a wheelbarrow that was used for mixing cement. Among other things, Lacey recalls spending hours using that cement to manually fill the potholes that littered the taxiways of Bovingdon Airfield – the former RAF bomber base where the company is still based today.

Although Lacey is no longer involved, Drift Limits has grown significantly over the years – thanks in no small part to its commitment to offer driving experiences at more affordable prices. Today, in addition to the drift school, you can have a go in homologated race cars such as a McLaren 12C GT3 and do stunt driving courses. There’s also the ‘police pursuit’, which sounds hilarious. Who wouldn’t have fun fleeing a professionally driven Dodge Charger police car in a Porsche Boxster? Find out more at driftlimits.co.uk.

Must admit going sideways is not top priority right now!