How Does the 2024 Chevrolet Silverado EV Compare to Other Electric Pickups? With the debut of the 2024 Chevrolet Silverado EV, Chevrolet is joining a fast-growing segment of the truck market: all-electric pickups. But how does this full-size electric truck compare with what other manufacturers have announced? Let’s take a look at currently available specs of the Silverado EV, Ford F-150 Lightning, Rivian R1T and Tesla Cybertruck to see how the Silverado EV stacks up.

Chevrolet estimates 400 miles of range for both versions of the Silverado EV that will be sold at launch: the very pricey $100,000-plus RST First Edition and the more affordable Work Truck. Both trucks are capable of charging at up to 350 kilowatts, adding approximately 100 miles of range in 10 minutes of charging.

Power figures for the Silverado EV aren’t finalized and come with some hedging from Chevy. The WT will have “up to” 510 horsepower and 615 pounds-feet of torque, while the RST First Edition will have “at least” 664 hp and 780 pounds-feet in a performance-oriented “Wide Open Watts” (or “WOW”) Mode. What either truck might have under normal, everyday circumstances is currently unclear. 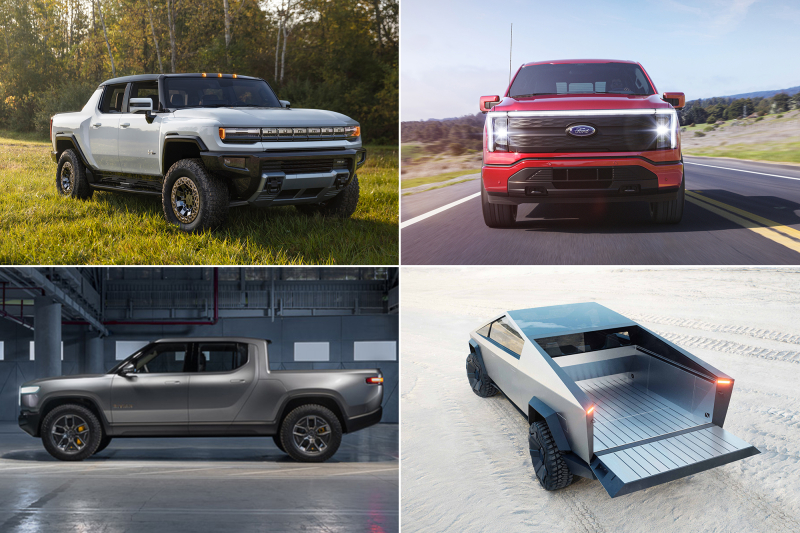 What about other electric pickups? Tesla hasn’t revealed official power figures but promises a 0-60 time of less than 3 seconds in its three-motor form, so … a lot, in theory. Rivian hasn’t published precise power figures, either, but says the R1T has more than 800 hp and more than 900 pounds-feet. The GMC Hummer EV pickup’s power figures depend on configuration, but the most powerful three-motor versions claim to have 1,000 hp. Ford’s F-150 Lighting trails the pack with a maximum “targeted” horsepower rating of 563 and torque rating of 775. In case you thought the “anything you can do, I can do better” pickup truck battles were mostly confined to heavy duties, it looks like that fight has spilled over to EVs. (Note that as with any power specification, a perceived advantage from any truck could be mitigated by weight, gearing or other factors.)

The two announced versions of the Silverado EV offer different towing and payload capabilities, and surprisingly, the WT is currently lower, rated at 8,000 pounds of towing and 1,200 pounds of payload; the RST First Edition is higher at 10,000 and 1,300 pounds, respectively. Chevrolet also claims that a WT with up to 20,000 pounds of towing capacity will be released later in the truck’s life cycle.

Besides the expected high-tech infotainment and safety features, these electric trucks seem to have unique features meant to set them apart. For the Silverado EV, its fold-down midgate (remember the Chevy Avalanche?) allows for the nearly 6-foot bed to extend to 9 feet or even nearly 11 feet, improving its cargo-hauling abilities.

Ford focuses on the Lightning’s frunk with power outlets as well as its vehicle-to-load charging capabilities, GMC’s Hummer EV can “crabwalk,” Rivian has a “gear tunnel” in the R1T that can stow large objects and even a camping stove, and the Cybertruck has window glass that shouldn’t break (though we all remember how that demonstration went).

Chevrolet says the Silverado EV will go on sale first in WT form to commercial buyers priced at $39,900 (no prices listed include destination, which has yet to be announced), so individual buyers likely will need to wait to purchase one. The Silverado EV RST First Edition should arrive in dealerships in the fall of 2023, priced at a whopping $105,000 (prices don’t include destination, which has yet to be announced). Chevy then plans to fill in the middle of the Silverado EV lineup with additional variants including the RST and Trail Boss, with prices ranging from $50,000 to $80,000 “or more” depending on equipment.

As for other electric pickups, the Ford F-150 Lightning will be available as a standard-range work truck for roughly $40,000, with extended-range versions starting at around $50,000 (all before options). The Rivian R1T will be priced from the high $60,000 to low $70,000 range to start, but the price can quickly escalate with options. The GMC Hummer EV pickup available at launch will be priced at more than $112,000, with cheaper versions coming in later years. When the Cybertruck was revealed, Tesla said it would cost between $40,000 and $70,000 depending on configuration, but like all Tesla prices, those are subject to change.