An electric vehicle that’s a small and stylish two-door hatch with an emphasis on fun to drive? There are now two players vying for your green dollars; The Mini Cooper SE and Mazda’s brand-new MX-30 both aim to tick the right boxes for fashion-forward green car buyers.

The elephant in the charging station with these two EVs is range, because neither one of these is going to set a distance record. Mini offers a rated 183 km and Mazda 161, thanks to a battery with 35.5 kWh for Mazda and 32.6 for Mini. Neither one is going after the long ranges offered by Tesla and others, but that’s missing the point.

The median Canadian commuter drives just 8.7 km to work and another 8.7 back, says Stats Canada, and the just seven percent of Canadians who commute more than 60 minutes actually only drive a median of 40 km each way. The long and short is that a 161 km range is long enough to keep nearly every commuting Canadian from coming up short or even uncomfortably short on their drive, even in the coldest weather conditions.

Still, these are probably EVs best saved for city and suburban dwellers, not rural Canadians who need to travel for hours just to get to the grocery store. Neither vehicle is the right choice for everyone, but the range works for a lot more Canadians than it seems.

Here’s how the two stack up.

The Mini Cooper SE is classic modern Mini – yes, that’s a thing – meaning big headlights, Union Jack taillights, and the familiar squat shape that is inspired by the original. It’s hard not to smile when you look at this one, even after 20 years and well into its third generation. Mazda’s MX-30 is a bit different. Unlike Mazda’s other crossovers that are loaded with scallops and curving panels, the MX-30 is a touch more slab-sided. It also has an absolutely tiny grille. We like the minimalism it brings to the lineup. 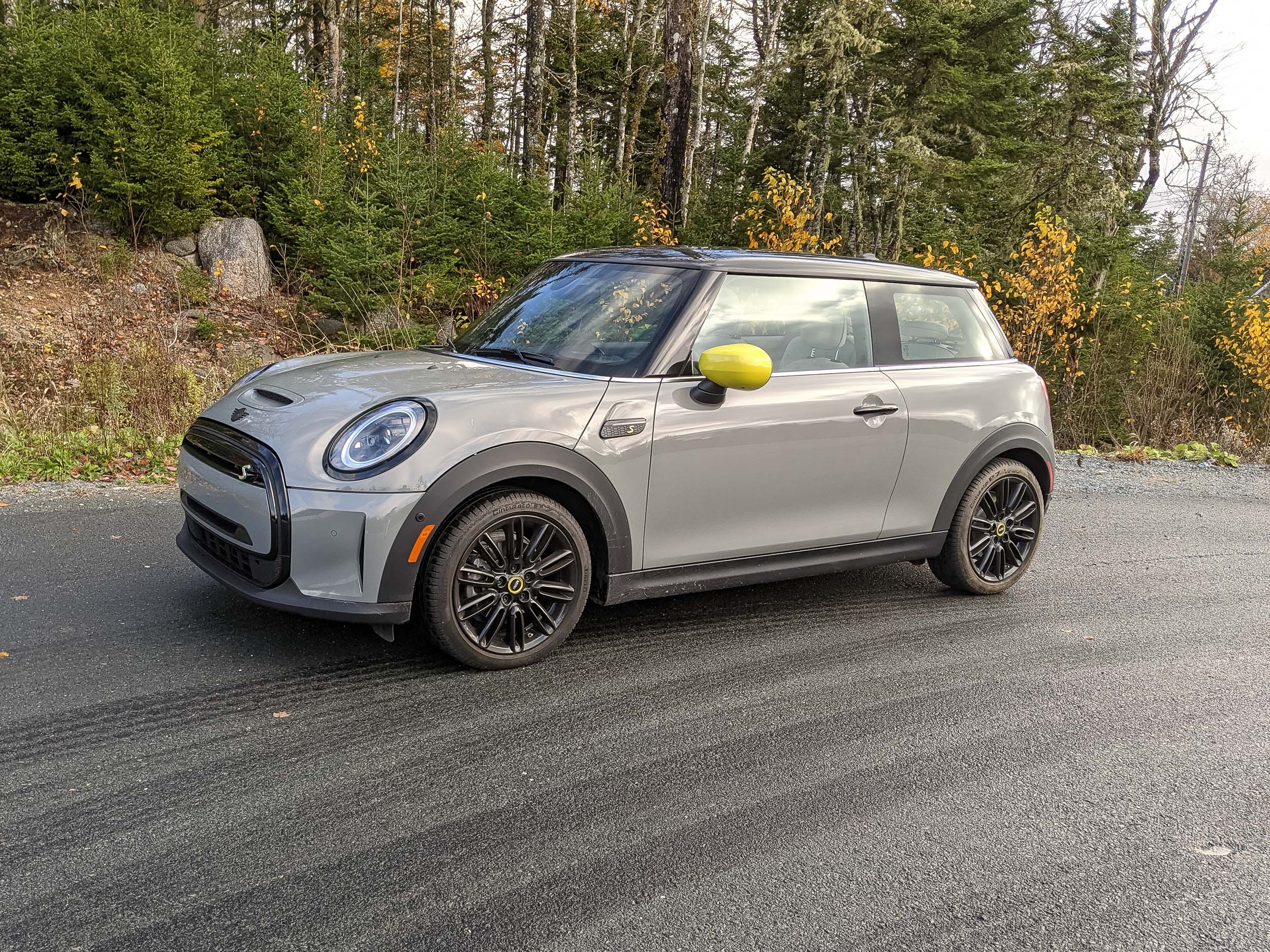 What we’re saying is these are both stylish and both will look great sitting in your tiny urban driveway or curbside in front of that cute new brunch spot downtown. Inside, Mini’s style is more about its traditional centre-mount pod that was once a speedometer but is now the infotainment system. It’s also packed with toggle switches for everything including the dome lights that offer loads of tactile fun to play with. Mazda has gone simple inside too, but its unique textiles and sealed cork trim make it feel warm, inviting, and special (as well as premium) inside. Fun fact, Mazda produced cork long before the company built cars.

Mazda makes Android Auto and Apple CarPlay standard on its 8.8-inch infotainment display, while Mini, with the same size screen, doesn’t offer the Android system at all. Both models offer a system interface that is awkward to use and sluggish, with Mazda keeping you focused on the HMI Commander rotary dial and Mini letting you use a dial or the touchscreen. Mini’s, in particular, brought us to the side of the road while we attempted to work out navigation and even basic audio commands, and we weren’t able to see important things like nearby charging stations. 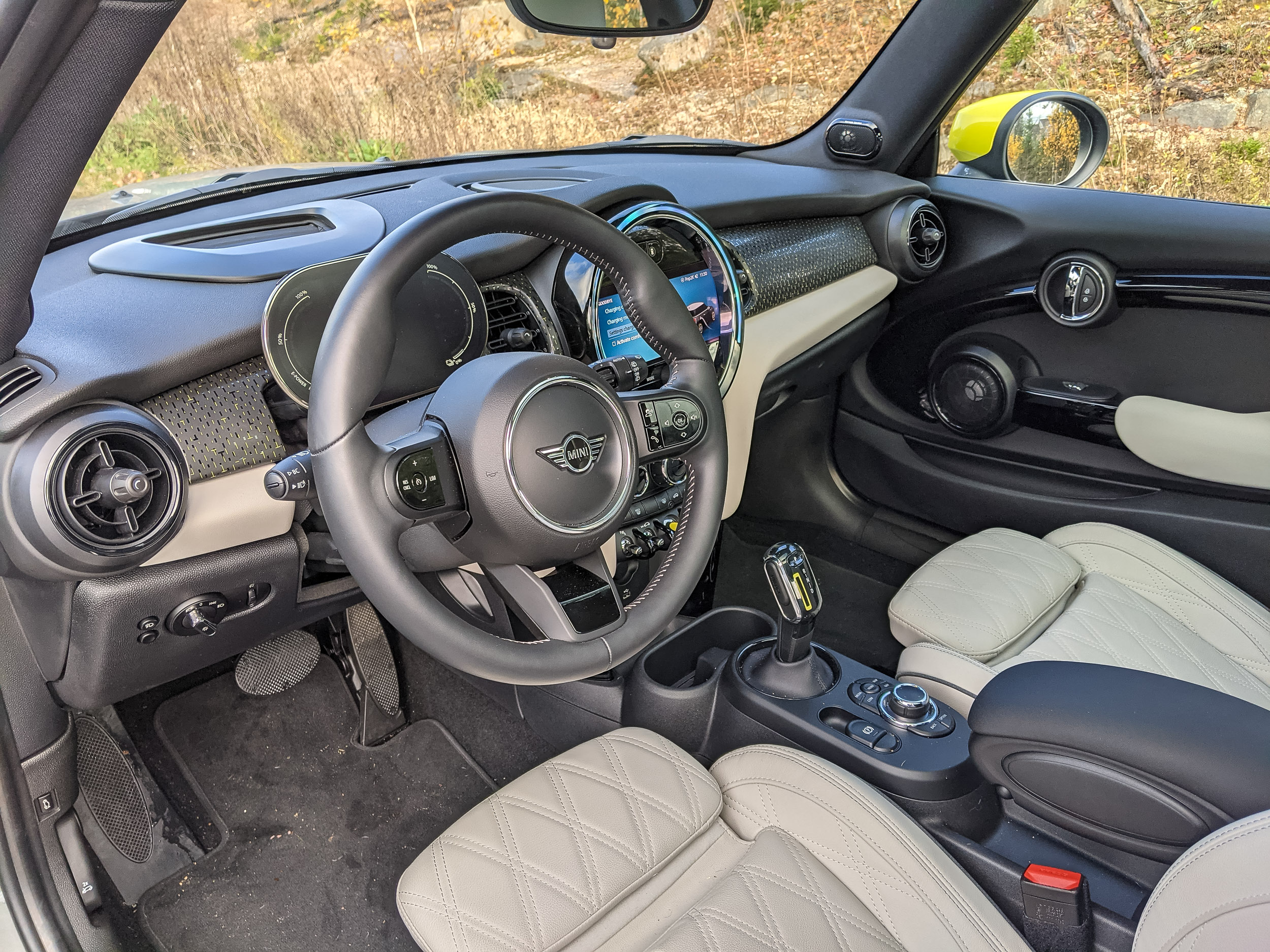 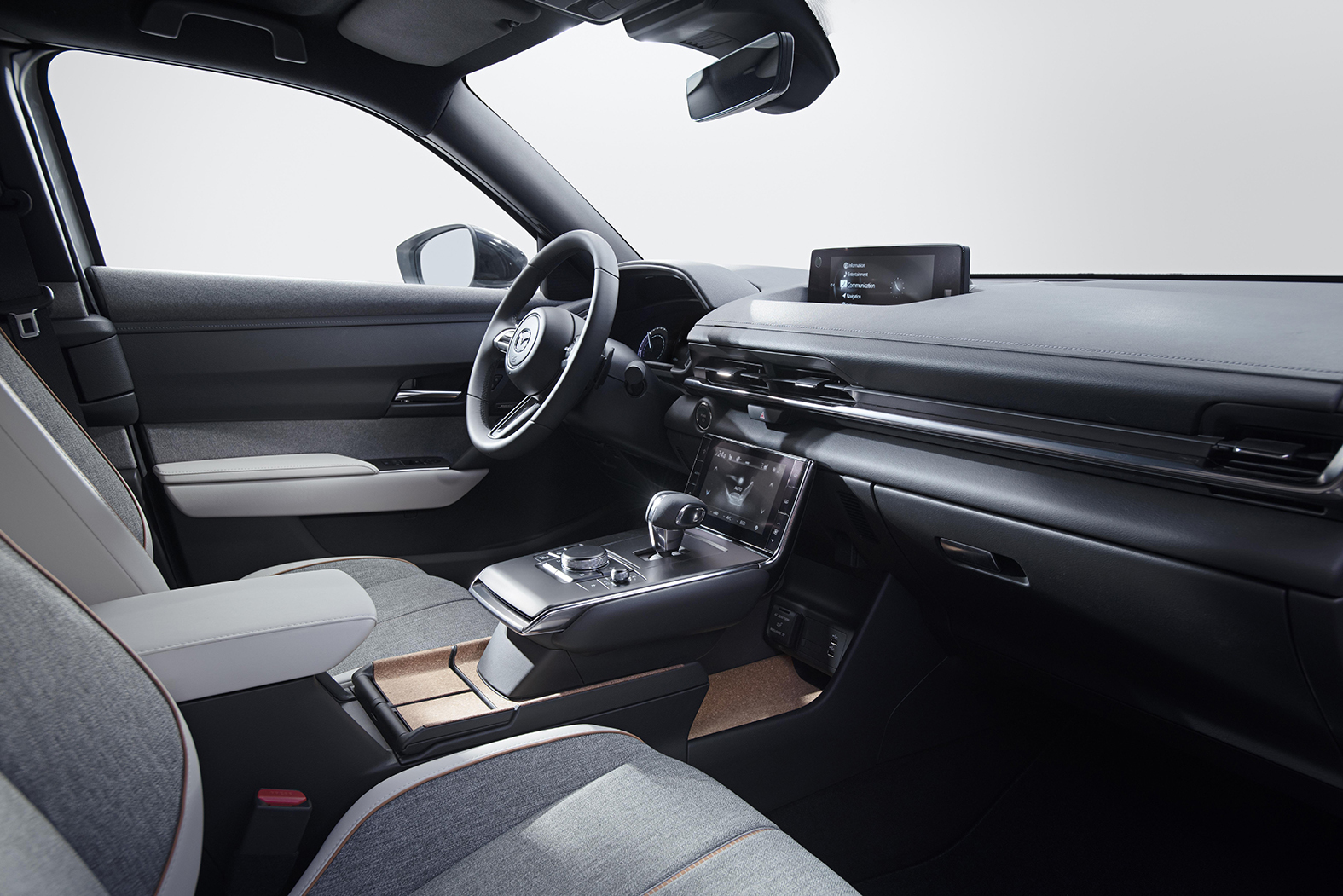 Blind spot monitoring, cross traffic alert (front and rear), and adaptive cruise with stop and go are standard on MX-30, optional on Mini. Though Mini will let you load the car up with driver assistance features like parking assistant, that’s reserved for top trims meaning it is bundled with pricy add-ons like a Nappa leather wheel, Harman Kardon audio, and head-up display. Meanwhile, Mazda includes nav and the head-up display on the base MX-30. Strangely, a heated steering wheel is missing from Mazda’s options list but is on the Mini as standard.

While neither of these vehicles invites frequent back-seat passengers, Mazda’s half-doors do give the rear seats a great deal more practicality. This goes beyond fitting passengers back there (a power-fold button on the back of the front seat makes this even easier) but also makes it much easier to toss a laptop bag or even groceries in the rear seat. Fitting a child seat should be a breeze thanks to the extra reach. Even reaching the rear seat area in the Mini is tough as the driver seat’s forward slide is quite limited. An average-sized person can fit in the back of the Mazda, but the Mini will be a challenge if not impossible.

Both allow folding of the rear seats to expand their small trunks. MX-30 climbs from 431 to 1,053 litres with the seats folded. Mini’s compact boot grows from 211 litres to 731 litres. Neither of these vehicles is going to be your first choice for a run to the landscaping depot, but they’re fine for most of your flat-pack furniture runs and that’s more in line with their intended purpose. 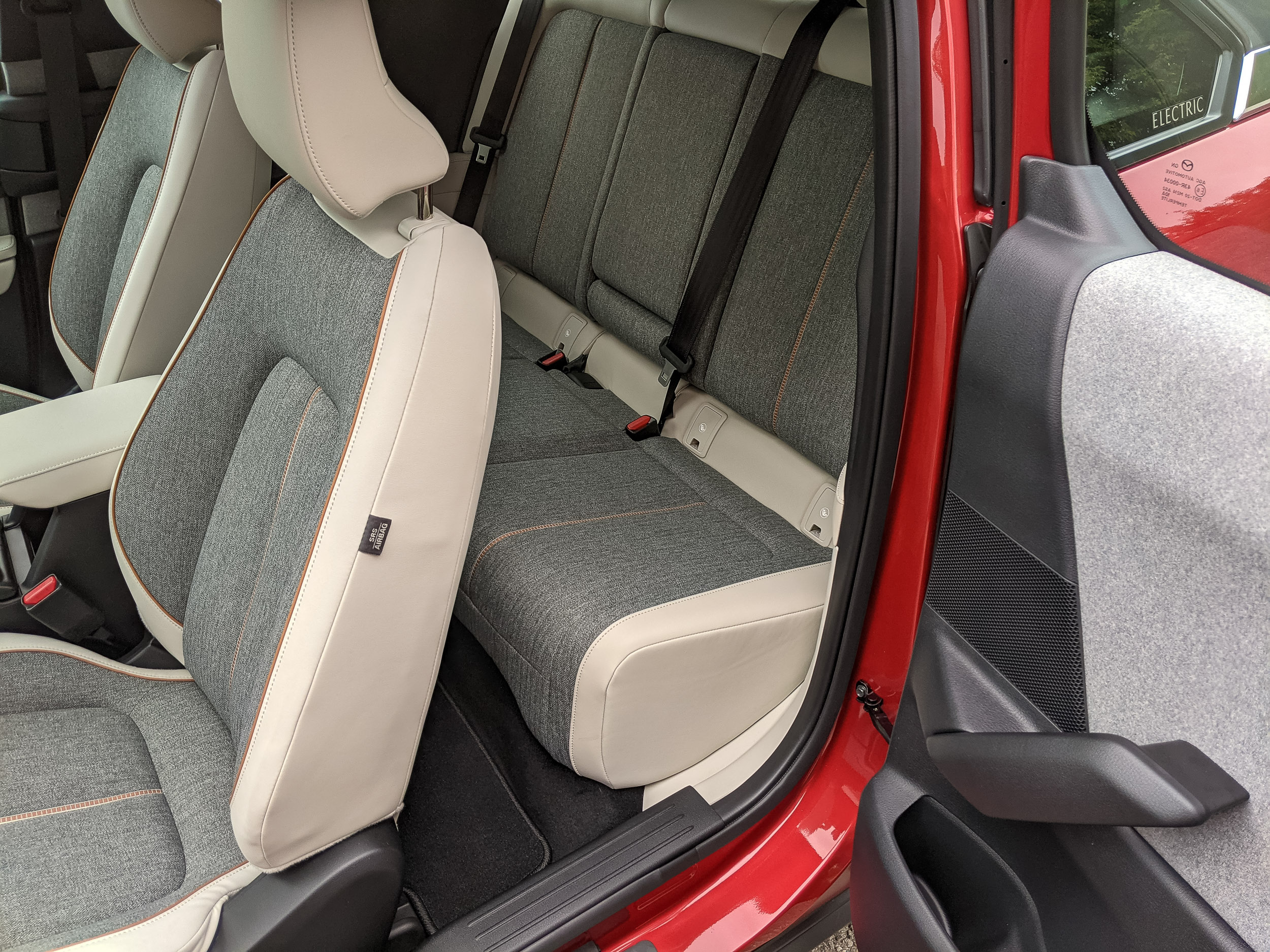 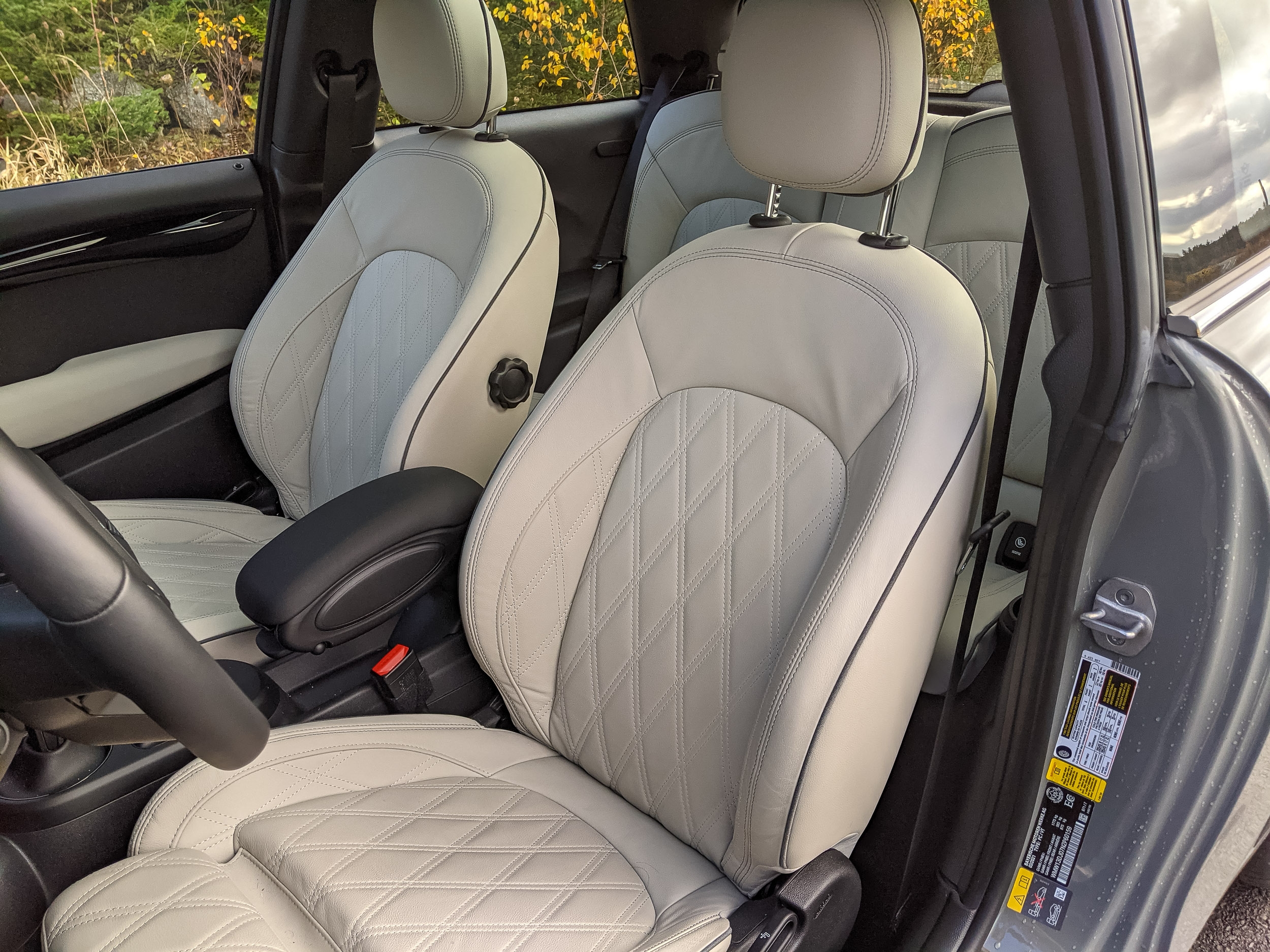 From behind the wheel, Mazda offers a more conventional driving position while Mini puts you quite far back from the windshield and very far to the left of the car. That made it feel like I was being swallowed up by the car and made outward visibility a challenge as well. The original Mini was known for being small outside, big inside, and this feels like the opposite.

Mini has 181 hp to Mazda’s 143, with both right at 200 lb-ft of torque. Those aren’t attention-grabbing numbers, and we’ve already said the range figures aren’t either, but the smaller batteries and less powerful motors pay dividends on the road. Long-range EVs are heavy. Very heavy, and that weight can make them miserable when the road gets twisty or when you’re darting from stoplight to stoplight. The Mini Cooper SE is just 1,400 kg and Mazda is 1,650, making these almost featherweights by modern vehicle standards. 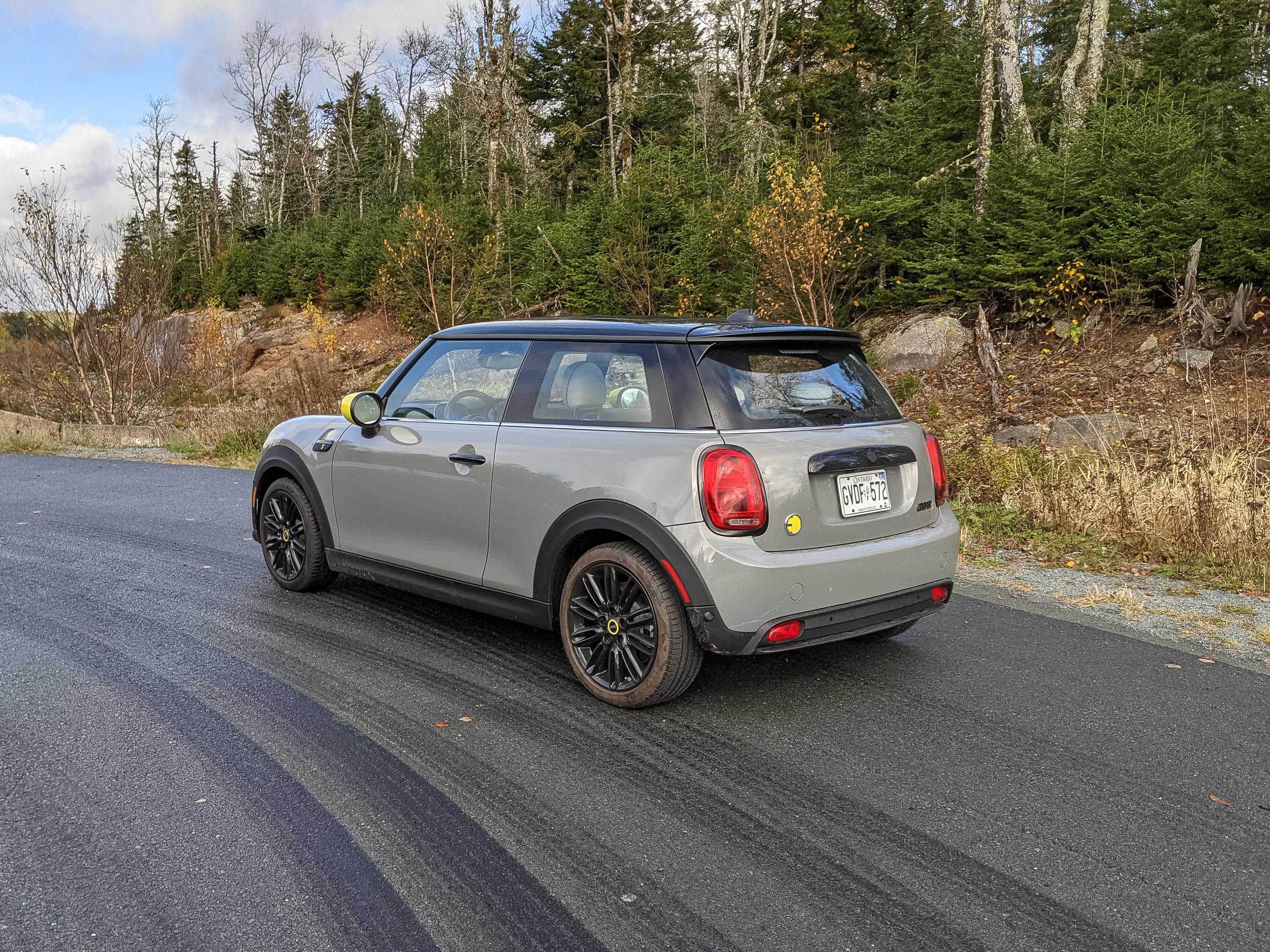 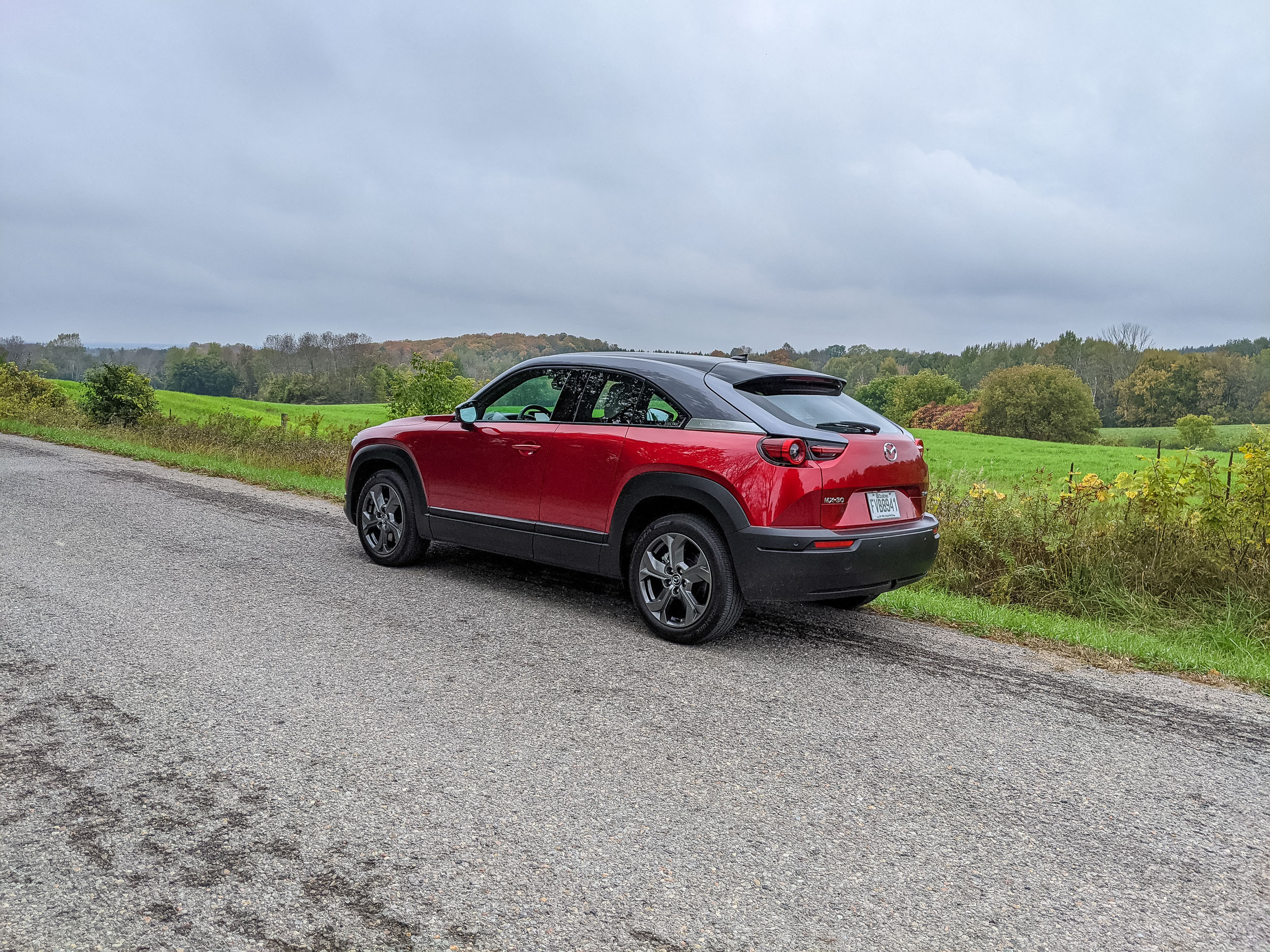 It lets them make the most of their power, zipping and darting through urban traffic. The Mini especially is loads of fun in this setting, with a stiff chassis and firm suspension – along with steering that feels manual instead of power-assisted – connecting you to the vehicle and encouraging you to dart for that on-ramp. While both are very fun to drive, the Mini does feel like it’s ready for the track as much as the street. MX-30 is softer, which gives it better levels of ride comfort, but it’s just not quite as much fun as the Mini.

Plug in and both can handle 50 kW L3 fast charging, getting you from low to 80 percent in 35 minutes for Mini, 36 for Mazda. Mini says the battery can go from zero to 100 in 4 hrs on L2 and Mazda gives a figure of about five and a half hours.

Mini starts from $40,990, and it gets a good amount of standard equipment for that price. As tested, our loaded Premier+ was $49,340, and while that’s not a bargain it is a strong price for a vehicle with the style and premium levels of fit and finish on offer. Mazda’s MX-30 GS from $42,150 does give you better standard kit while the loaded GT is $47,150. Tick all the boxes on the Mini and we’d say it’s a better value than Mazda because of all of the extra features it offers. On the two base trims, it’s more of a wash and highly dependent on how you value each one’s particular features and finish.

If you’re looking for good green in-town fun, it’s hard to beat either one of these subcompact EVs. If you’re looking for a car for two and aren’t planning on much luggage, Mini’s premium features and brand are appealing. Want to at least pretend you’re practical, plus get interesting modern finishes? Mazda all the way. We’d pick the Mazda, because of its space as well as its spacious feeling, sticking with the base GS version for the lower price and those cool fabric seats. Just don’t overlook either simply because of their range figures.