Three years ago, I put my money where my mouth was. I bought a compact hatchback with a stick after having tested out all of them. Today, there’s a new competitor in the segment chasing after hatch buyers like me who want their affordable cars to be loads of fun, practical and efficient. This is how the 2021 Toyota Corolla Hatchback SE stacks up against my own 2018 Honda Civic Hatchback LX.

When I was last shopping, the Toyota in this segment was the iM. A strangely styled former Scion with an interior that was more than a bit of a disappointment. It was barely in the running against the Mazda3, Kia Forte, a couple of competitors who have since been axed, and the Honda I chose.

The 2021 Corolla hatch couldn’t be further from that iM. An all-new platform with a massively upgraded interior and new powertrains, including the six-speed manual with rev-matching that is supposed to make the car a load more fun. Is it enough to change my mind once my lease is up?

Starting with space, because that’s a crucial part of the mix even when you’re looking at small cars and not just because they aren’t that small anymore. In these two cars in particular, it really shows off that cars are about more than just the spec sheet, even the one with dimensions on it. The Corolla’s figures show headroom nearly equal with Honda but sit in the cars and Corolla’s roof is much lower and offers a much more cramped space. That’s without a sunroof, where I simply graze the headliner. In a sunroof-equipped car, I just plain don’t fit. In the Civic, I can wear a helmet and still crank the seat up a few notches. In the Toyota, I’m overlapping arms with my passenger and in the Honda, we’re well separated.

The second row of the Corolla is even tighter, with six inches less of legroom on the sheet and what feels like almost the same less in headroom. If you have adults back here for long, they had best be below average height.

Similarly, cargo space is greater in the Civic, and it’s about a 50 per cent difference. Toyota has added an option this year that drops the spare tire to let the cargo floor sit lower, and while that adds a small amount, unless you’re hauling bricks it’s not a hugely usable difference. 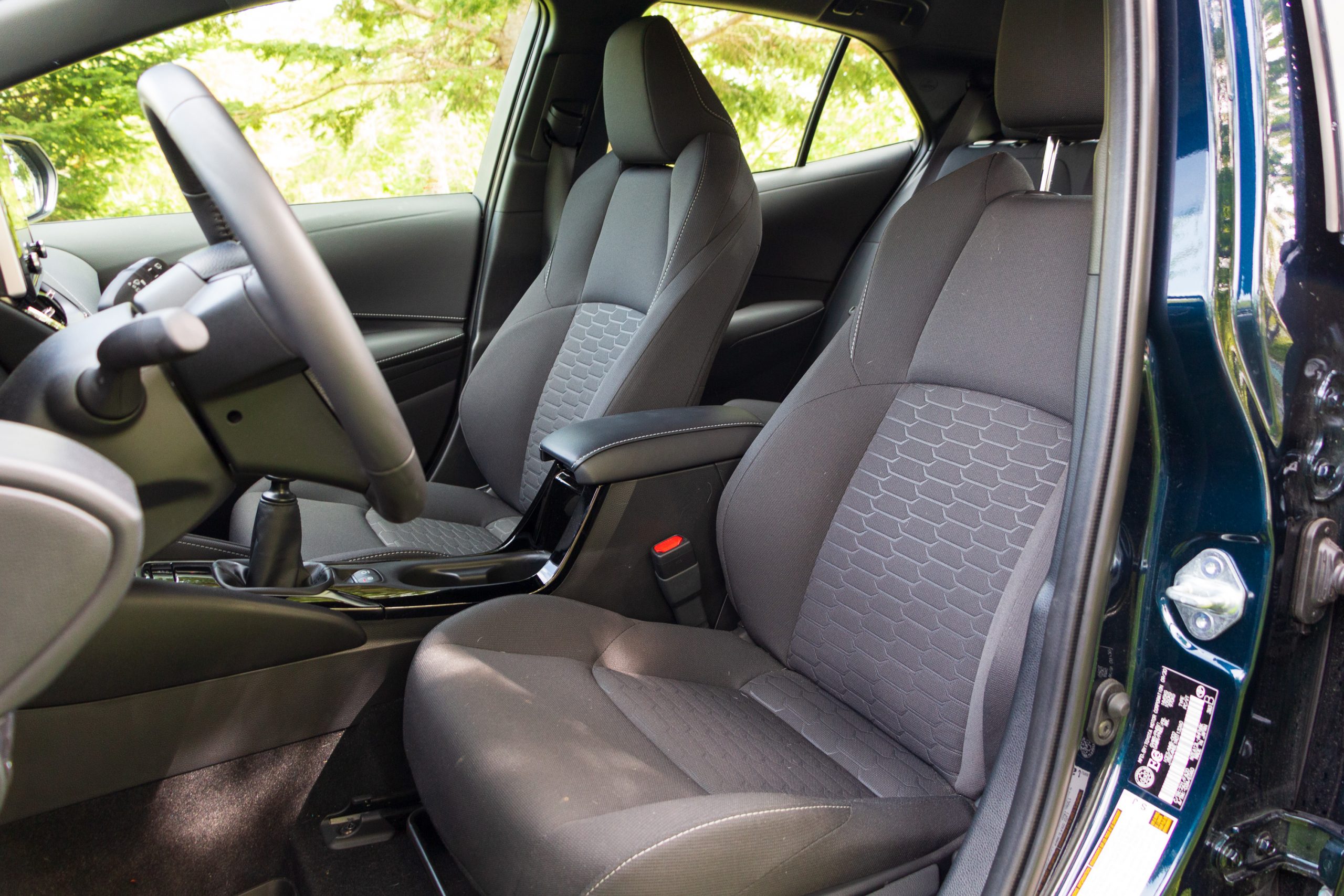 When Honda launched this generation of the Civic, it was universally slammed for not having a volume knob. It was enough that Honda eventually added one, along with some other buttons. Still, it’s a system that’s extremely slow to respond and, if you use the stock look home screen, hideous. There’s a much better hidden screen option that nobody seems to know about, and that’s the only thing that pushes it ahead of Toyota’s system. Toyota’s is slightly faster to operate, it has actual volume and tune knobs, but it’s difficult to navigate and looks dated.

Both cars offer Android Auto and Apple CarPlay now, so just use whichever one works with your phone and improve your experience immensely.

Toyota offers a heated steering wheel on SE Upgrade and XSE, meanwhile, Honda doesn’t offer one at all. The Civic also takes ages to warm up. Winter point: Toyota.

Toyota is absolutely loaded with driver aids compared with my Civic, which has zero. Rear cross-traffic, radar cruise, auto high beams, lane tracing, blind spot alerts, it’s got the big ones. For fairness, the 2021 Civic has those too, along with Honda’s Lanewatch single-side blind spot camera instead of traditional blind spot warnings, though they are absent on my ride.

Both of these designs are polarizing, but the trimmer-looking Corolla is definitely the looker of the two. If you want vents, creases, lines, and general business both with give you all you can handle, but while the Civic looks like it is wearing clothes a few sizes too large, the Corolla is wearing a modern slim-fit shirt and pants.

Honda offers the Civic in four shades of dull, plus a red and a blue. When I was looking at my LX-trim car, it was blue, white, or black. Toyota understands that small car buyers are likely young shoppers who want to look flashy and offers the Corolla hatch in a wide range that includes two-tone options, a bright blue visible from orbit, and Galactic Aqua Mica, the stunning shade of this car that transitions from deep blue to deep green depending on the lighting. It feels strange saying Toyota is the stylish one, but it’s true.

Both the Civic hatch and the Corolla Hatch SE come with upgraded engines as standard. In the Honda, it’s a 174 hp, 167 lb-ft 1.5-litre turbo four and in the Corolla it’s a 168 hp, 151 b-ft 2.0-litre naturally aspirated four. Both get a six-speed stick and that’s how these were equipped. Both had a CVT option.

While the engine output figures sound similar, they could not be more different on the road. Honda’s 1.5T pulls strongly from under 2,000 r.p.m., even in sixth gear. The massively flat torque curve makes this car feel quicker than the numbers suggest, even against more powerful cars. Toyota’s 2.0, though, is the opposite.

Heading up hills on four-lane highways in my part of the country means fourth gear. Acceleration for passing on the flats means the same. The power and torque peaks here are both way up the rev range, and as a result the Corolla feels vastly slower even if you’re using all those revs.

Civic hatch is rated for 8.1 L/100 km city, 6.4 highway, and on the factory tires, I never saw worse than six on a full tank. Most were lower. Toyota rates at 8.4, 6.7, and I saw mid 7s in my own driving, making the more powerful car the more efficient one.

It sounds like a big win for Honda, but it’s not.  The Corolla offers a delightful long-throw gearshift and rev-matching. The shifter calls out to you just begging to be used, so the extra gearchanges are a delight, not a chore. A silky-smooth delight thanks to the rev-matching as well as a shifting action much better than Honda’s.

You’ll have to thrash the Corolla, even in normal driving, but that just makes it more fun. Suddenly the lack of space isn’t a detriment, it’s part of the appeal. Against the ponderous blob that is the Civic, the Corolla is toned, lithe, and sharpened.

The Corolla Hatchback has a much firmer ride than the Civic, and that makes city roads and their crumbling asphalt bothersome. But you knew the Corolla was going to be stiff as soon as you saw the 40-series rubber bands on 18-inch wheels. It’s not a surprise and if you want softer and boring, Toyota has its L trims to choose from. It turns in more briskly, you can get the tiniest bit of rotation from the rear, and the steering, though typical Toyota over-boosted (with no warning before slamming into lock) is more communicative than Civic’s.

More easily able to cut through gaps on city streets, to handle quick switchbacks and tightening turns. If you really want to drive, this Corolla is fun. Far more fun than anything else in the segment, and part of that fun is the lack of speed and acceleration. It lets you spend more time blasting to redline and while it’s slow – and you might not like uphill downshifts as much as I do – this isn’t the kind of slow that leads to white-knuckled merges. You just need to grab a gear first.

Both models offer strong value, with a full array of creature comforts and assistance features for about as low of a price as you can find these days. This Corolla SE Upgrade (which you’ll want for the heated seats, wheel and blind spot alerts) was $25,300. The Civic, which now starts at Sport trim, is much more expensive at $30,400. A large gap in this segment, giving Toyota the nod for value.

That largely sums up the Corolla Hatchback. It’s the fun one in the class. Which against Honda and the Mazda3 is shockingly impressive. Does it feel a bit cheaper compared with those? Sure, but that’s because it is, and that just adds to the fun. Would I change my mind and go Toyota if I was shopping for these cars today? No, I wouldn’t, but that’s because I’m a giant who needs the extra space and I love the massive torque of the Honda. If you don’t need the extra space, and you want the one that will be more fun all of the time, then the Toyota is tough to beat.

This article was originally published by Wheels.ca. Read the original article here.
Share
Facebook
Twitter
Pinterest
WhatsApp
Previous articleSensors decide who gets pulled for inspection at these SD Ports of Entry
Next article“Hyundai wiped the floor with the opposition at the 2021 New Car Awards”