As swan songs go, it was a good one. We gave the Polestar 1 a rousing sendoff that included several hours of winding, forested Santa Ynez Mountain roads, dodging tumbleweeds in the high desert above Santa Barbara, while keeping a sharp eye out for roving javelina.

Many of you might be thinking “but didn’t this car just come out?” – while others may not have heard of it at all.

It’s only been a scant three years since our First Drive of the Polestar 1, and it is unusual for a car to have such a short life span unless it’s an abject failure – which the Polestar1 most decidedly is not.  Gregor Hembrough, Head of Polestar North America, said the vehicle was never intended to be a high production model, but a “true halo car” with a short run of only 1,500 units. The overall total fell just shy of that, since the company literally ran out of parts.  Based on the Volvo Concept Coupe that made the auto show rounds in 2013, the Polestar 1 helped launch Polestar as a standalone brand. So, to clarify, the company that began life as a performance modifier specializing in Volvos, was subsequently acquired by the Swedish company to produce sportier, Polestar-badged variants of their production models… is now a separate entity devoted solely to full-on electric luxury vehicles.

Yet, the car that kicked off Polestar’s independence isn’t electric. While their second vehicle, the Polestar 2, is full EV, the Polestar 1 is a plug-in hybrid that uses a twin-turbocharged and supercharged 2-litre four cylinder engine producing 305 hp/321 lb-ft.; and a 67hp/119 lb-ft electric motor sandwiched between it and the gearbox. At each rear wheel is an 85kW electric motor delivering a combined 229 hp and 354 lb-ft. through its own planetary gearset – eliminating the need for any additional mechanical or electrical distribution system to handle torque vectoring. Combined, the car’s total output is 601hp and 738 lb-ft of torque. Energy is stored in two 34 kW battery packs that take up most of the car’s rear trunk space, but allow the Polestar 1 112 km of all-electric travel – still the longest range of any available plug-in hybrid.

Visually, it’s a stunner. The Polestar 1 is a wide, low-slung Gran Turismo with a lightweight body built entirely out of carbon fibre – which lessens its considerable 2,350 kg (5,180 lb) by 227 kg than if it had been wrapped in steel. The car makes up for its heft with a nicely balanced 48/52 front-to-rear weight ratio, the twin-turbo four up front offset by the battery pack, and twin rear motors behind.  There’s still a lot of Volvo in its architecture; the Polestar 2 a lot less, and future Polestars to come will reportedly have no Volvo DNA whatsoever. 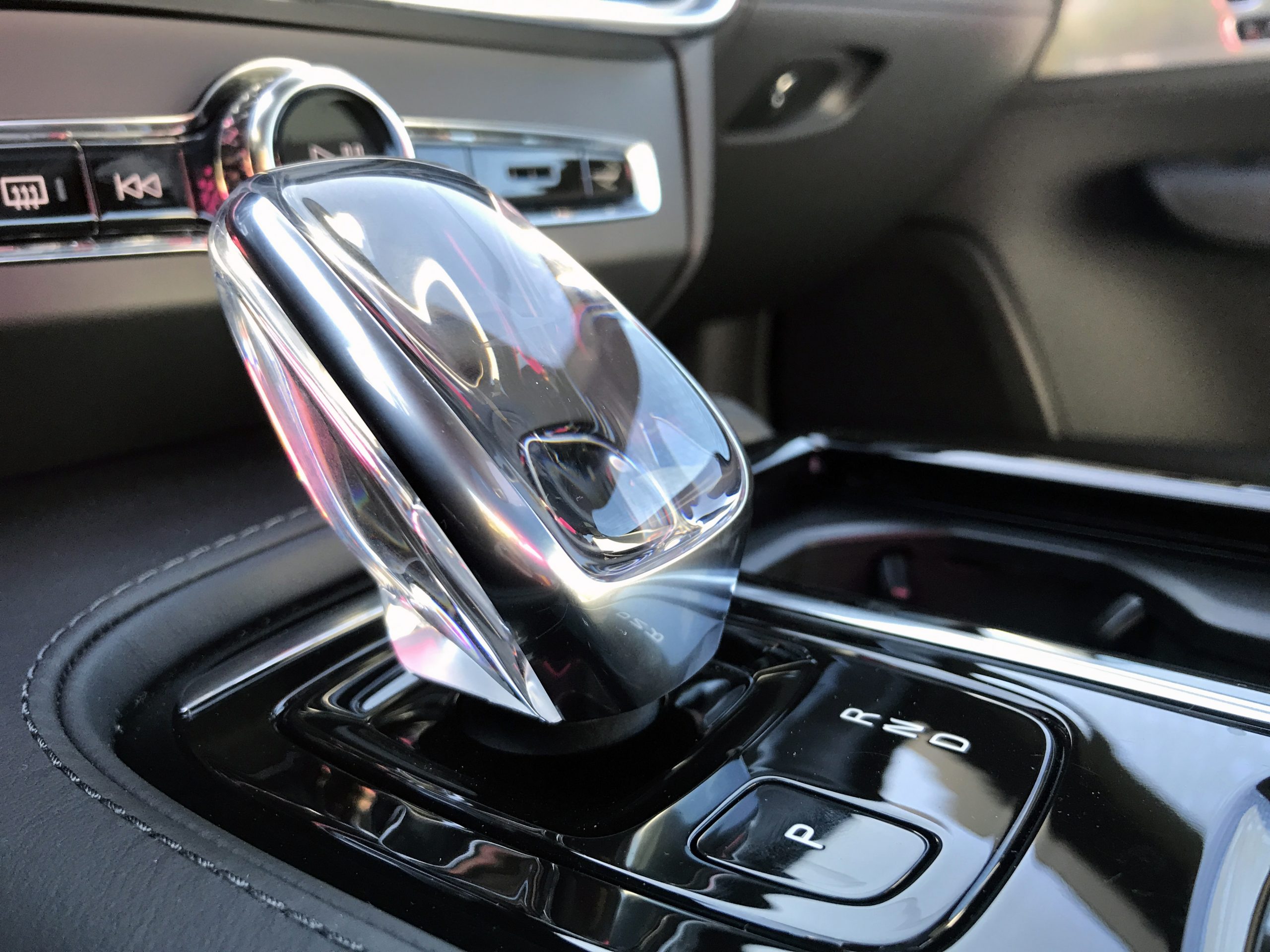 The Scandinavian minimalist cockpit is somewhat austere for a $200,000 vehicle, though beautifully crafted, and the Orrefors crystal gear selector is a nice touch. The knurled “start” switch looks like it came from a watch maker. There are four deeply cushioned bucket seats, and while the front two passengers can enjoy all-day comfort, those behind them have very little headroom. Given the limited cargo space (125L in the trunk) and seating restrictions, the Polestar 1 is best considered a 2-seater GT with extra room in a pinch.  There’s only one trim level, and the only available option is a $5,000 matte gold paint job.

There are four selectable drive modes: “Hybrid” which uses a combination of electric and gasoline power channelled through the rear wheels only; “Sport” which optimizes performance by constantly varying its power source and employing all four wheels when needed; “Pure” which locks out the combustion engine and uses only full-electric RWD; and “AWD” which locks together the front and rear axles for full time all-wheel-drive.

There are some very narrow roads in the Santa Barbara Hills, banked by rock walls that feel uncomfortably close when you’re driving such a wide car. Wending our way up the mountain, traffic is sparse and there’s room to push the car through the sinewy hairpins.  Up till now I’d left it in “Hybrid” mode which optimizes energy consumption and comfort over performance. Flicking the selector to “Sport” quickens the throttle and shift response, and firms up the steering and handling. The Polestar 1’s suspension features adjustable Ohlins dampers, and like most bottom-heavy, top-light EVs, it feels really planted and stable through the turns.  The  electric motor at each rear wheel power provides instant torque vectoring through the turns, instead of being channeled through a torque vectoring system. 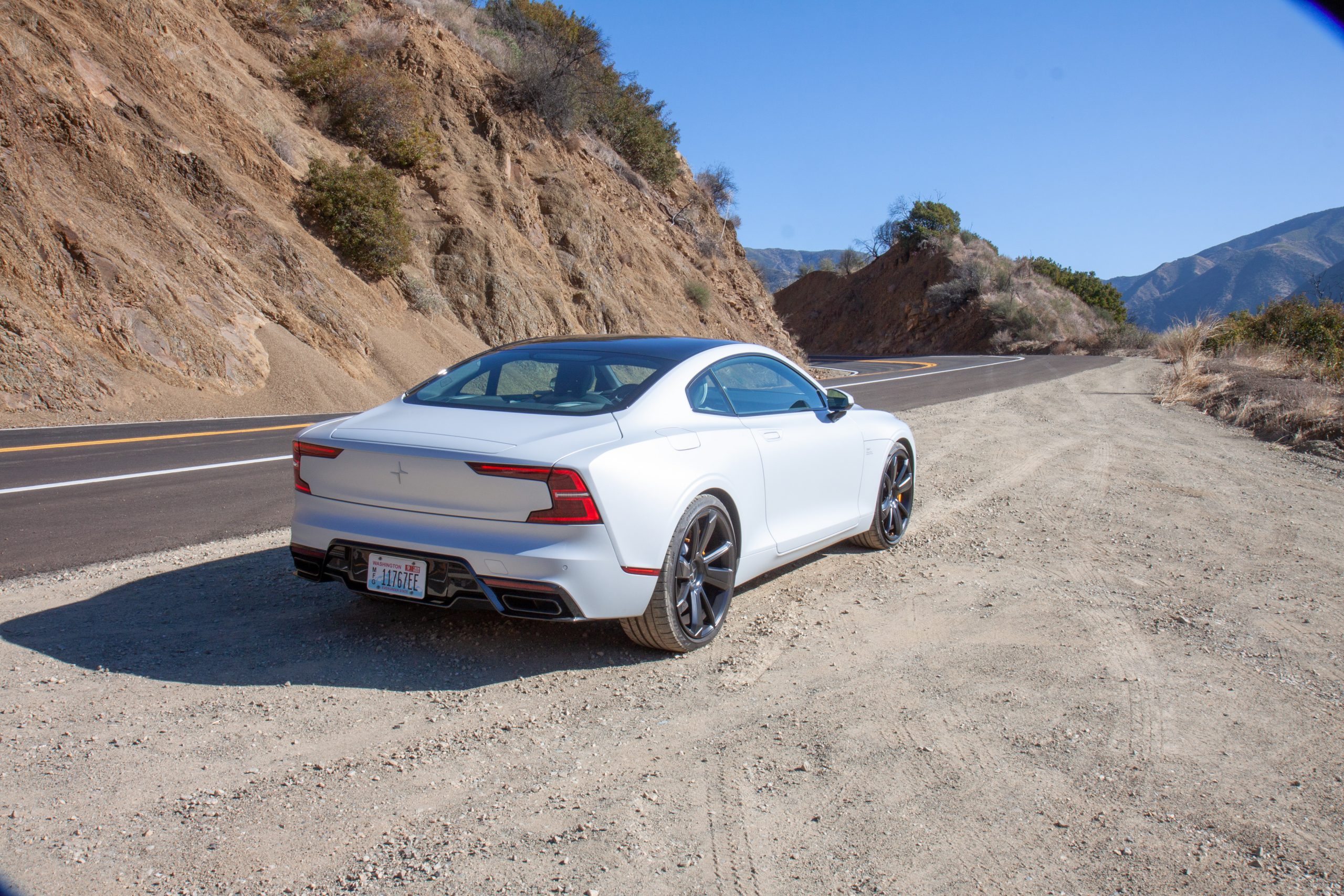 Acceleration is astounding with the combined power sources, and though the brakes are up to the task of bringing down the speed, they do bite hard. Brake regeneration isn’t as well-modulated as the Porsche Taycan, or Lucid Air’s, and one-pedal driving isn’t quite as intuitive.  Steering is just the right heft but doesn’t deliver a lot of feedback – it’s technically sophisticated but lacks the organic feeling of one-ness that performance drivers crave.

In some scenarios, a PHEV is the better tool for the job.

Several hundred miles of high-altitude, curvy switchbacks, and Santa Barbara traffic produced an overall fuel consumption rating of 26.9 mpg, or 8.7 L/100 km. Despite hitting the throttle hard on the deserted desert stretches, I still brought the Polestar 1 back with nearly half a tank of fuel. Since a large portion of the drive route passed through remote areas with no cell coverage– and definitely no charge stations – the Polestar 1 had a distinct advantage, range-anxiety wise, over a full EV.

Deliveries of the Polestar 1 will continue until late this spring. But with only 40 models assigned for all of North America, you’d be very lucky indeed to get your hands on one. And if your heart was set on the matte gold paint – sorry, but they’re all sold out.