The Rolls-Royce Spectre will be positioned as the spiritual successor to the Phantom coupé in the luxury marque’s range when the new electric model goes on sale at the end of 2023.

The engineering parameters for the Spectre are now being set as the Goodwood firm begins the almost two-year testing programme, which Autocar has been granted unprecedented early access to as the car undergoes winter testing near the Arctic Circle at the start of its development.

This included an early ride in a development mule, just the sixth Spectre development car to have been created.

The positioning of the Spectre within the firm’s range has now become clear, too, beyond simply being ‘the electric Rolls-Royce’. The company has decided against replacements for the Wraith coupé and Dawn convertible. No more orders are being taken for the pair, and the last cars will be built in early 2023. 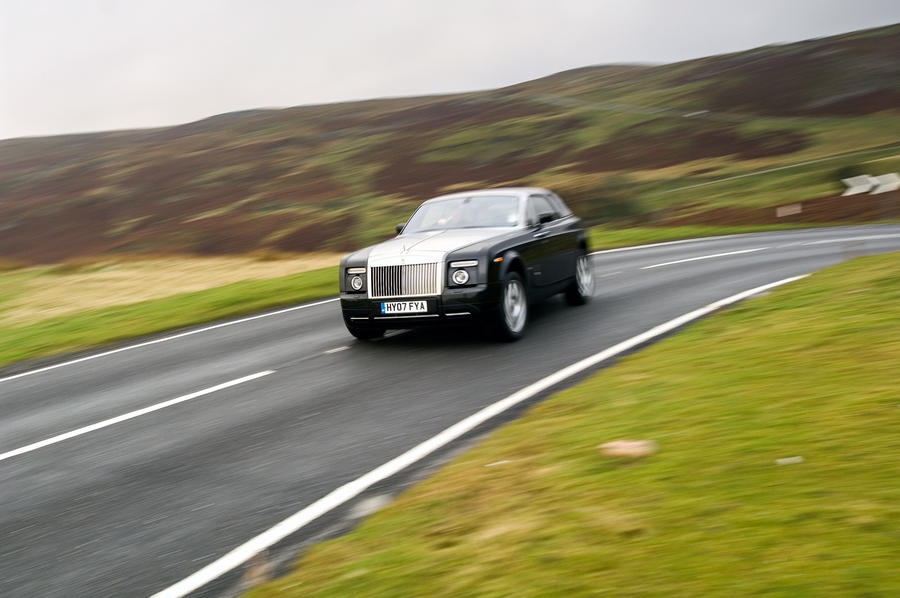 As a result, Rolls-Royce has made space for the Spectre to fulfil the role of a two-door model in the range, albeit at a larger size than either the Wraith or Dawn and more in line with the 5.6m-long Phantom coupé that was withdrawn from sale in 2016.

Rolls-Royce boss Torsten Müller-Ötvös said it was important that the Spectre had a role simply beyond being an electric car. He added that, while technically possible, simply making one of its existing models electric was never seriously considered as this would not add as much to the brand as a bespoke bodystyle would. “It is first a Rolls-Royce, and then it is electric,” he said.

The positioning of the firm’s Architecture of Luxury modular aluminium spaceframe but beyond that it is a very different proposition from the Phantom, Ghost and Cullinan models that also use the platform. Sited between the axles is a 700kg battery pack, a joint development between Rolls-Royce and parent firm BMW that uses cobalt and lithium mined from certified sources in Australia and Morocco. Beyond the weight of the battery, no other technical details of the model have yet been confirmed.

However, Rolls-Royce director of engineering Mihiar Ayoubi offered lots of insight into the wider technical development of the Spectre and its early progress. The battery, for example, plays a key role in the overall package. It is completely flat underneath to allow for a smooth floor to improve aerodynamic efficiency. The battery’s mounting also enables better weight distribution front to rear for improved ride comfort and handling, and a low centre of gravity. In addition, it has acoustic benefits, allowing Rolls-Royce to use less than the 120kg of soundproofing found in the Phantom. 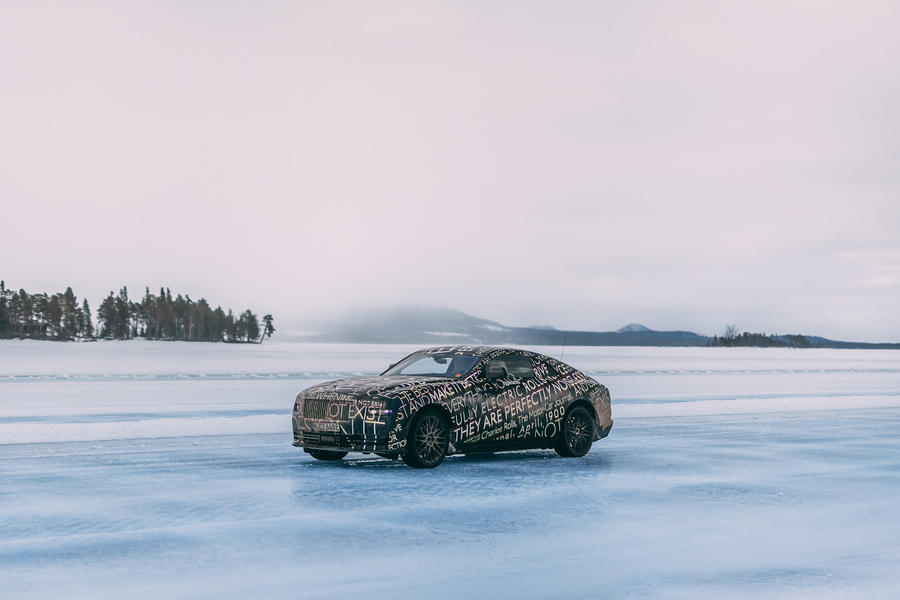 Rolls-Royce has confirmed that the car will ride on 23in wheels in production, the largest fitted to a coupé since the 1926 Bugatti Royale, and that it will adopt a twin-motor set-up with one sited on each axle for four-wheel drive.

Familiar chassis technology from other Rolls-Royce models, including the rear-wheel steering and active anti-roll systems, are carried over, too. In terms of styling, the split headlight design of the Phantom Coupé will return on the Spectre.

Ayoubi said the initial development at the firm’s test site in Arjeplog, Sweden, was to first ensure the prototypes function as expected and then set the parameters for the tests to come. “The car has only just learned to walk,” he said.

In this early development (the Spectre mule we saw was just 25% representative of a finished production example), The new Spectre will have a 700kg battery mounted in a flat floor much of the work is ensuring the basic components – such as the windows, doors, heating and cooling, and rubber seals – work as they should in an extreme environment. But “as silence is luxury”, said Ayoubi, “they need to not only perform in these conditions but perform silently”. 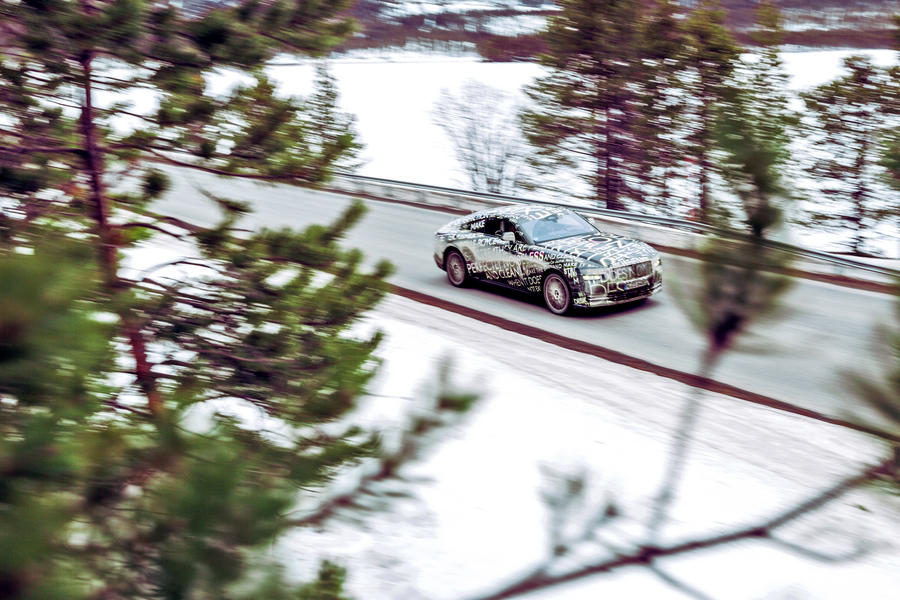 Also ongoing was the start of the development of the car’s new “electric backbone”, said Ayoubi, which contributes to the Spectre being “the most connected Rolls-Royce ever”. Although there are fewer mechanical parts than in one of the firm’s V12 models, there is a huge increase in intelligent electrical systems that are interconnected and controlled by this electric backbone. In total, there are 7000 metres of cabling in the car, whereas a regular premium car will have around 2000 metres.

“We have highly integrated hardware with software intelligence,” said Ayoubi. “The systems are intelligent now. We have multi-channel, multi-control systems and we have developed algorithms to harmonise the work of these competing systems

“We have 25 times more algorithms in this car. There are 1000 high-level functions with up to 25,000 sub-functions. There are 141,200 send and receive functions in this car, each with a tolerance of 25 milliseconds and they should not fail.” This is known as ‘RollsRoyce 3.0’ and refers to the firm’s new way of developing cars in its upcoming electric era.

Development will soon end in Arjeplog and move on to high-speed testing at the Miramas test facility in France and hot weather testing in Dubai and southern Europe, as well as at the firm’s engineering base in Munich and its Goodwood headquarters. Testing will return to Arjeplog at the end of the year “to see how much the prototypes have learned”, said Ayoubi. 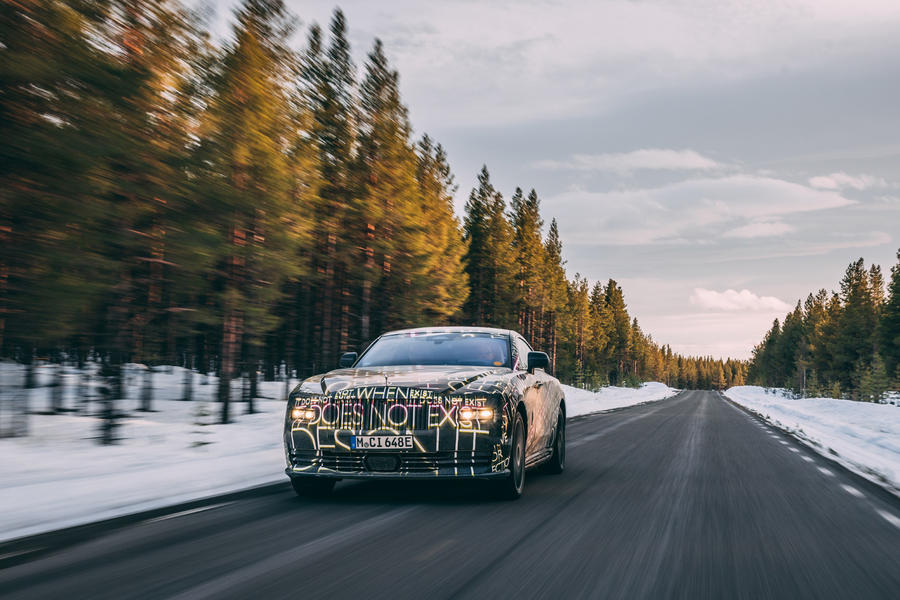 In total, some 2.5 million kilometres (about 1.55 million miles) of testing will be done and more than 30 prototypes will be built.

As for early sales success, Müller-Ötvös said Rolls-Royce is already taking orders and deposits for the Spectre, including from people who are new to the brand. The firm forges close relationships with its customers and has consulted with them on its plans to make an electric car since as far back as the 102EX concept of 2010, an all-electric Phantom that customers were able to test. 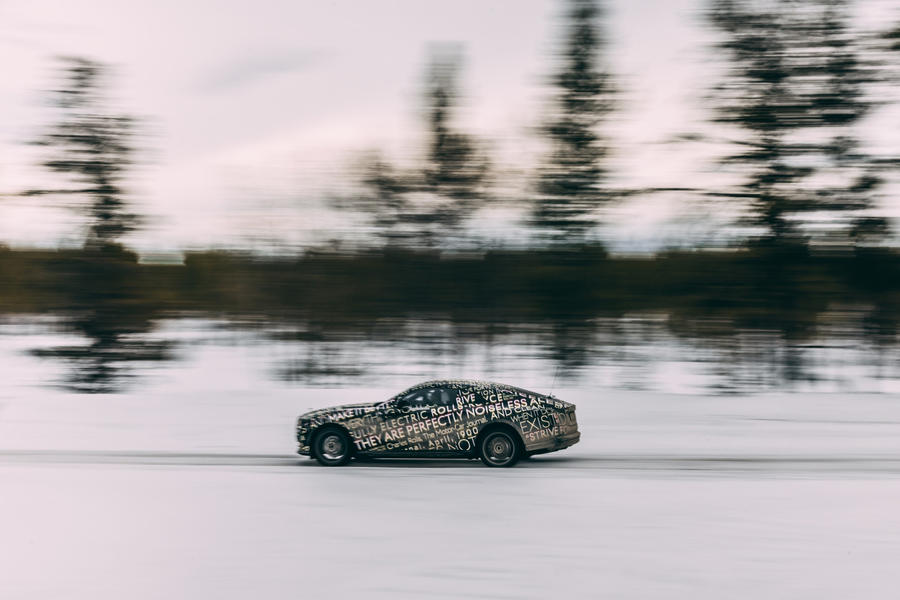 One of the aspects still up for discussion in the development of the Spectre is exactly what noise the EV will emit on the outside to alert pedestrians to its presence, and just how quiet the firm will make the car inside.

Rolls-Royce models are famed for their quiet, calming operation, but the absence of an engine and an exhaust system in the Spectre should help to take that to the next level. Indeed, absolute silence inside the cabin was a possibility but not a totally desirable option.

“Contributing to noise are the exhaust, engine, wind and the tyres,” said director of engineering Mihiar Ayoubi. “This does without the first two of them. We could give the customer the option of a noise, or silence. We could even get real silence. But the problem with absolute silence is that people cannot stand it forever. You need a minimum amount of noise.”

Of the two remaining types of noise, the firm is already developing an aerodynamic package to help reduce wind noise as much as possible and discussing options with tyre suppliers.

Ayoubi joked that Rolls-Royce’s requirements led to “our suppliers not liking to work with us any more!”

He added: “We’re demanding. Tyres are the only connection point to the road. They have to do a huge amount: efficiency, acoustic, safety, braking, driving dynamics. And then RollsRoyce comes along and says: they’re not perfect enough.”