Finding an ingenious garage hack is not only satisfying, it can save time and money.

Carl Wener and I met in the early 1980s, because of a common interest: Motorcycles. Carl runs the performance division of a successful, family-owned auto parts store. While we’ve both been involved in motorcycling over the past several decades, Carl has taken his interest to another level. Several years ago, he began collecting Japanese motorcycles of the era in which we both got introduced to motorcycling. He currently owns almost 70 Japanese bikes. You read that right.
The bikes range in age from the mid-1970s to the early 1990s. Not all of them are runners, though the ones that do run are original and in very good condition, some of them with surprisingly low mileage. And his runners — of which there are more than 20 — don’t stay in the garage untouched: he rides them in rotation, and lets friends ride them, too.

I’ve helped him assess and acquire a few of those bikes, and as Clinton Smout pointed out in a previous column, we’ve discovered that, sometimes, people don’t always publish factual information in classified ads. And sometimes they simply have different standards as to what “needs nothing” means. We’ve learned that, even if the bike appears pristine and original and needs nothing, it will likely need something, especially when it comes to rubber components. This, of course, can include engine seals, fork seals, gaskets, master cylinder and caliper components, and carburetor and airbox manifolds. It’s those last items I’ll get to shortly.

Occasionally, I will pick up one of Carl’s non-runners and transform it into a runner. Included among the bikes I’ve worked on in the past are Kawasaki KZs and GPZs, Honda CBs, VFs and VFRs, Yamaha RDs, FZs and FZRs, and the latest, a 1986 Suzuki GSX-R750.

The Gixxer isn’t one of the cleaner bikes in his collection, but it is complete and mostly unmolested. From afar it looks like it’s completely original, but a closer inspection reveals that, while the exhaust is an OEM item, it’s in fact an exhaust from a 1986 GSX-R1100 — not a deal-breaker, but something that will eventually get replaced for the real thing. And knowing Carl, he’ll eventually find a GSX-R1100 to fit to the errant exhaust system. The fairing had a couple of cracks in it, and I unfortunately added a couple more when the bike fell over in my pickup as I was unloading it at my place. I still don’t know how I’ll make that one up to Carl, but we’ll figure something out.

When Carl picked up the GSX-R a couple of years ago, the previous owner was forthcoming enough to point out most of the bike’s defects, and what items would need work — it wasn’t sold as a “needs nothing” bike. Even though the bike had started up and idled, he had confessed that it hadn’t run in several years and would probably need a carburetor overhaul, as would the brakes, and probably some other stuff.

The first thing I did after removing the bodywork was to get the bike running right. While removing the carburetors, I discovered that the airbox rubbers had hardened over the decades, and instead of being soft, had the pliancy of hard plastic. Replacements are available, but I nonetheless wanted to find a way to soften the originals. I’ve tried silicone spray and plastic-restoring products in the past, but aside from renewing the faded surface finish of rubber, they did nothing to soften it. 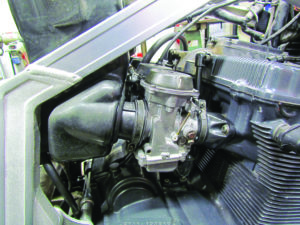 While searching online, however, I found a recipe that apparently softens rubber, and following the threads of several forum posts on the subject, it seemed to work. The recipe calls for a mixture of three parts rubbing alcohol to one part wintergreen oil. I had no idea what wintergreen oil was, so I asked my girlfriend, Roxanne, since she’s well stocked with therapeutic essential oils. Sure enough, she had a couple of vials. You’re probably familiar with the fragrance of wintergreen oil: It’s the pungent, peppermint smell of muscle-relaxing topical gels.

The active ingredient in wintergreen oil is methyl salicylate, and it is what apparently reacts with the rubber, softening it up — the alcohol is just used as a carrier agent. With just two vials, I only had enough oil to partially fill a small jar with the mixture, or enough to mostly submerge one rubber manifold.

I was skeptical about its efficacy, but after two days of soaking (it can take several days), the manifold came out as soft as it was the day it left the factory. When I informed Carl about it, he confirmed that, while we’ve made many discouraging discoveries while working on his bikes, this was a good one. I’m keeping this recipe in my files and have ordered more wintergreen oil — and, as a bonus, my shop now smells minty-fresh.