Indian Motorcycles has tied themselves with Workhorse Speed Shop to give us a jazzy number for the track – and the mastermind behind the build is none other than Brice Hennebert, the creator of Appaloosa, the Indian Scout based Sprint Racer.

We’re also told he injected a bit of the Apaloosa’s genetics into this fun project, which is awesome – so let’s get into it.

Hennebert was previously asked to create the Black Swan, an upcoming model yet to be revealed to the community proper. The commissioner of the Black Swan must have adored the end product, because his request for Brice to make a second bike for his brother resulted in the gorgeous piece of motorcycle you see before you, revealed a little over a year later: 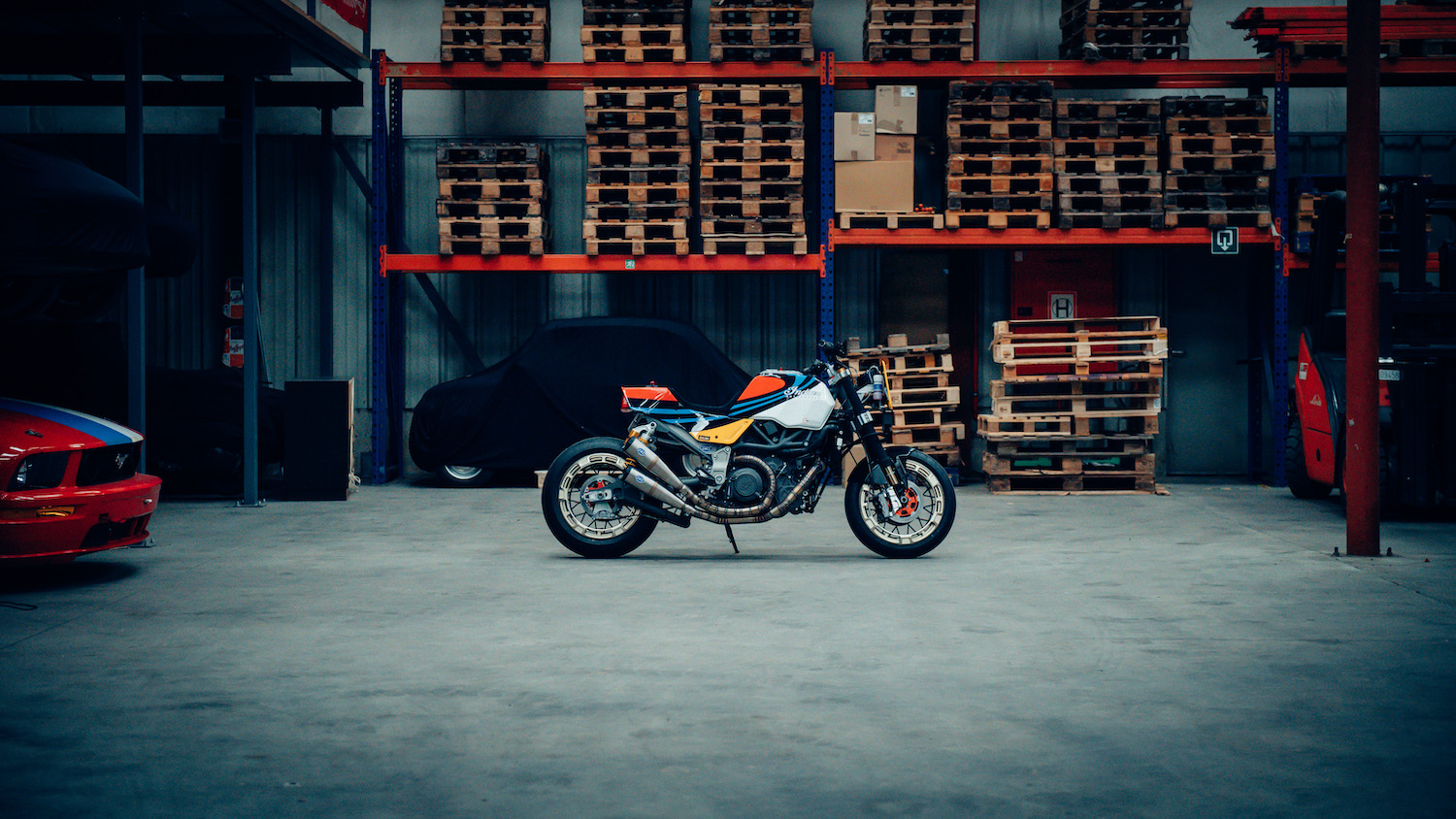 Brice was tickled pink for this build, too – the press release tells us that the man was simply given instructions that the bike was to be “something colorful and as sharp as a war tank.”

Beyond that, the brief was pretty open and created the perfect playground for Hennebert to do his thing.

“The only restriction was that the paint be inspired by the Martini Racing livery,” comments Brice.

“After some research and brainstorming with myself, I based the look around AMA SBK racers from the 80s and the Rally cars from the same era. The main influences were the Lancia Delta HF mixed with Bol d’Or 750s and some muscle bike DNA.” 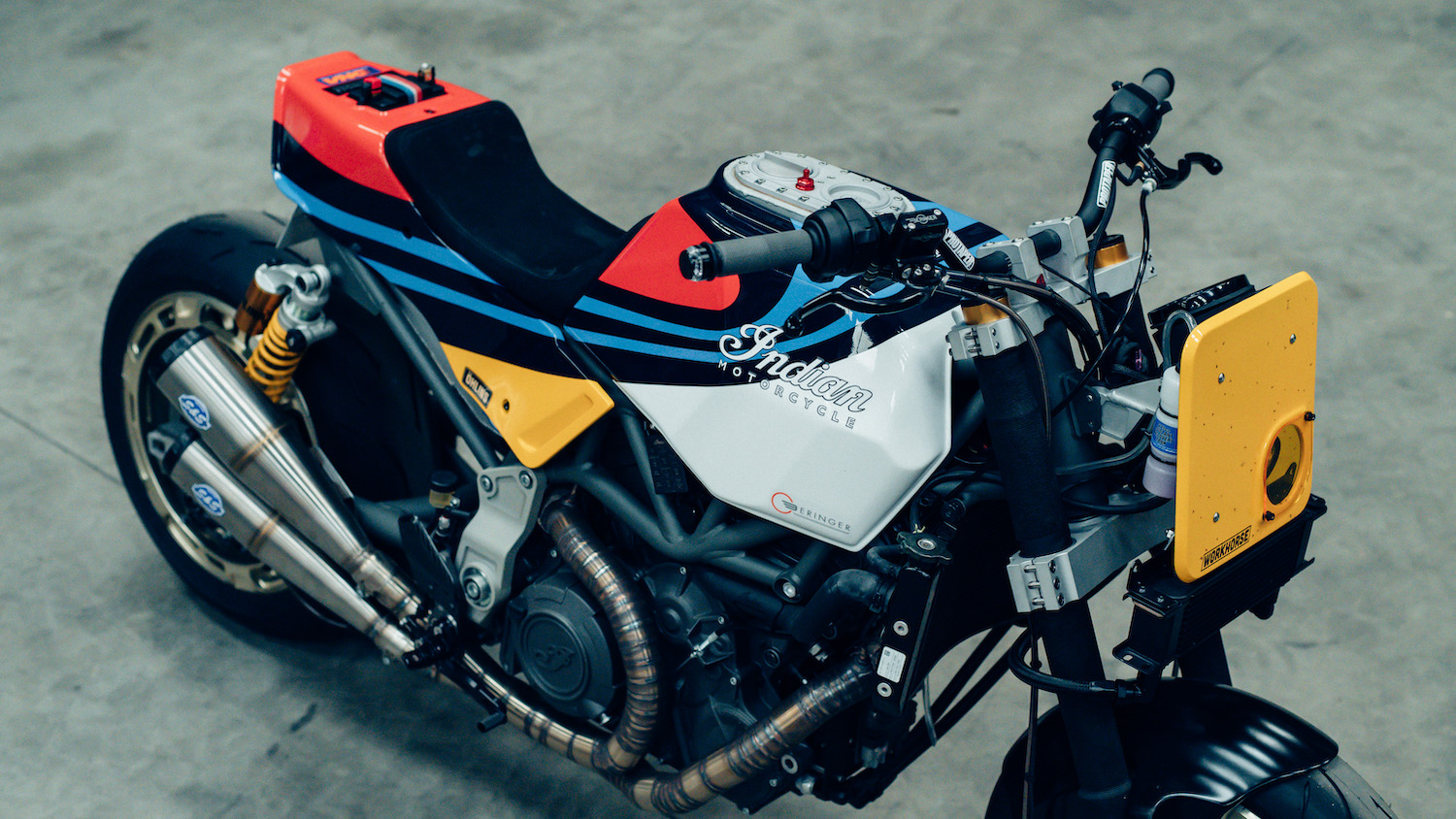 Features of the FTR AMA include an upright riding position, with Hennebert keeping in line with the base bike’s ergonomics and handlebars.

For the next step, 3D printing was necessary, with the end product being custom bodywork reinforced with carbon fiber – and that’s not all. 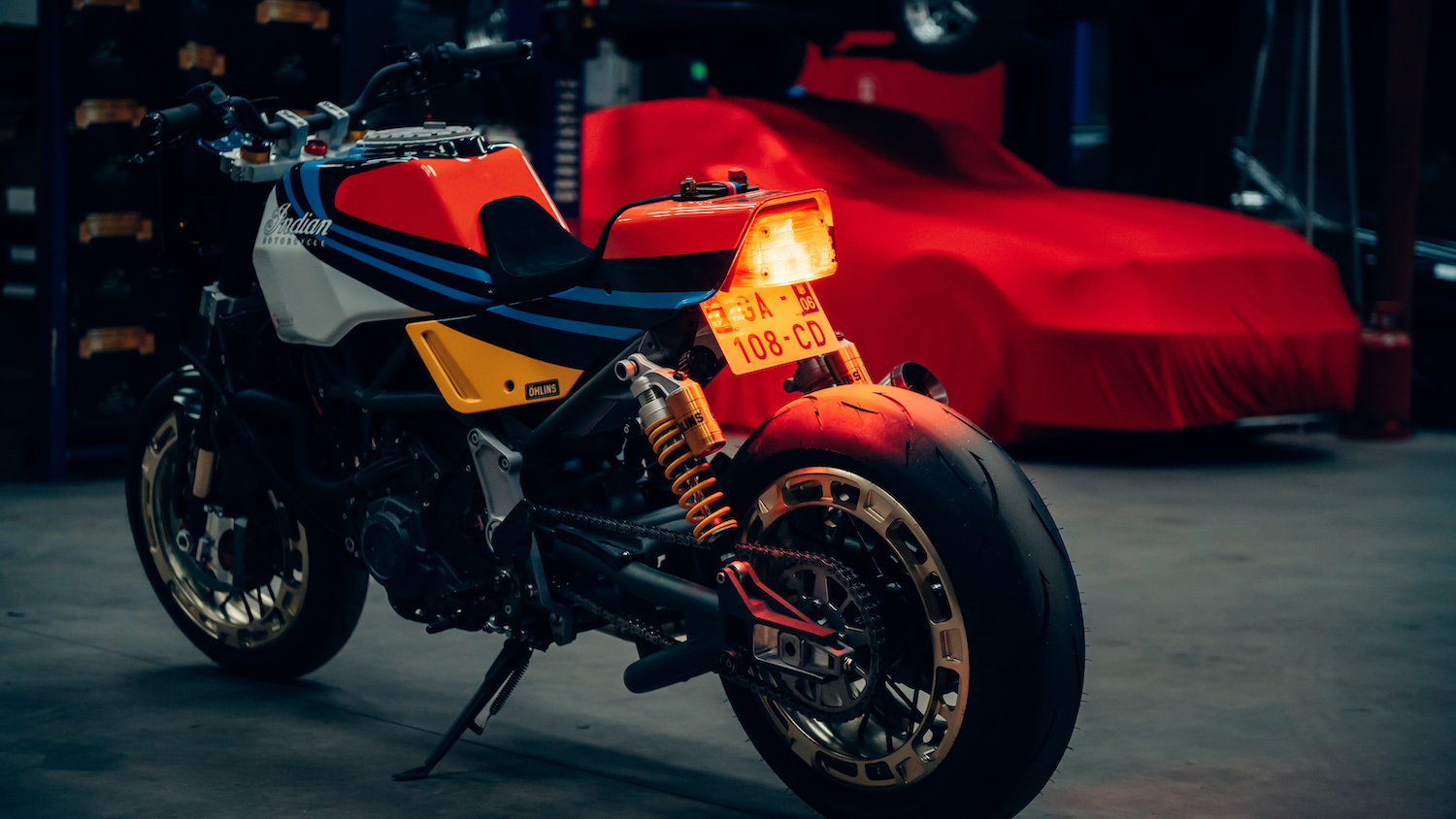 Sitting behind the 3D-printed front plate is the Indian Chief’s new OEM dash, with a nifty rear piece incorporating the seat, tailpiece, and battery holder, courtesy of the typical battery positioning in endurance motorcycles. Twin piggyback Öhlins shocks sync up to a bespoke swingarm built from 7020 aluminum tubes – the bike even has a smooth, brushed-leather saddle created in collaboration with Jeroen from Silver Machine (a long-time favorite for beauty bike seats), “complemented by an old school taillight adapted to take LEDs.” 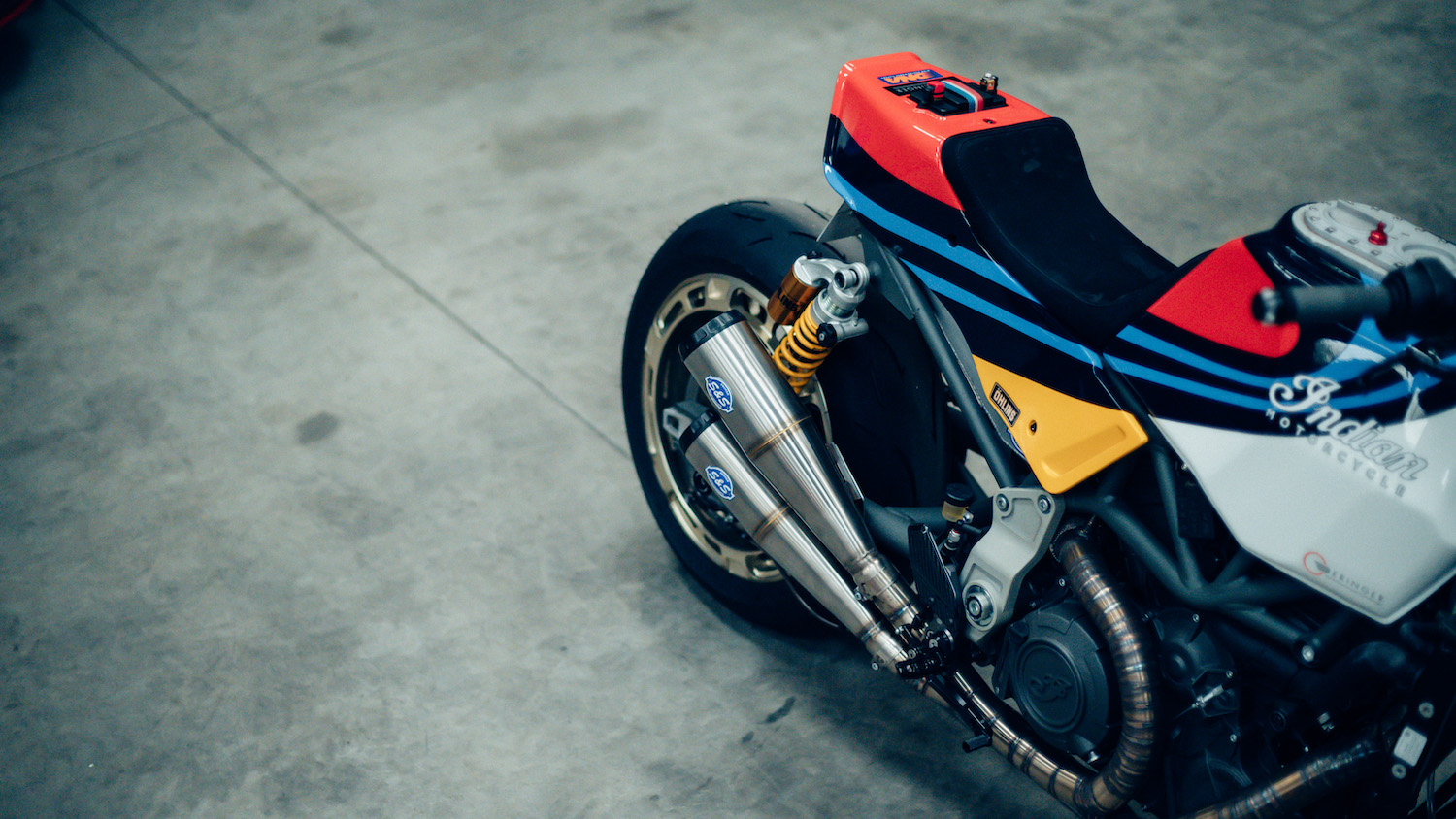 The whole project sits on a totally eye-catching wheelset, which Brice tells Indian’s press release was “[a collaboration] with Fabio from JoNich Wheels in Italy.”

“The design is based on his Rush wheels, machined from billet aluminum, but without the carbon flanges. The design makes me think about the turbo fans wheels used on the racing Lancia. So that was a perfect choice for me. They are completed by a Dunlop GP tyre set with this mad 200 rear tyre.” 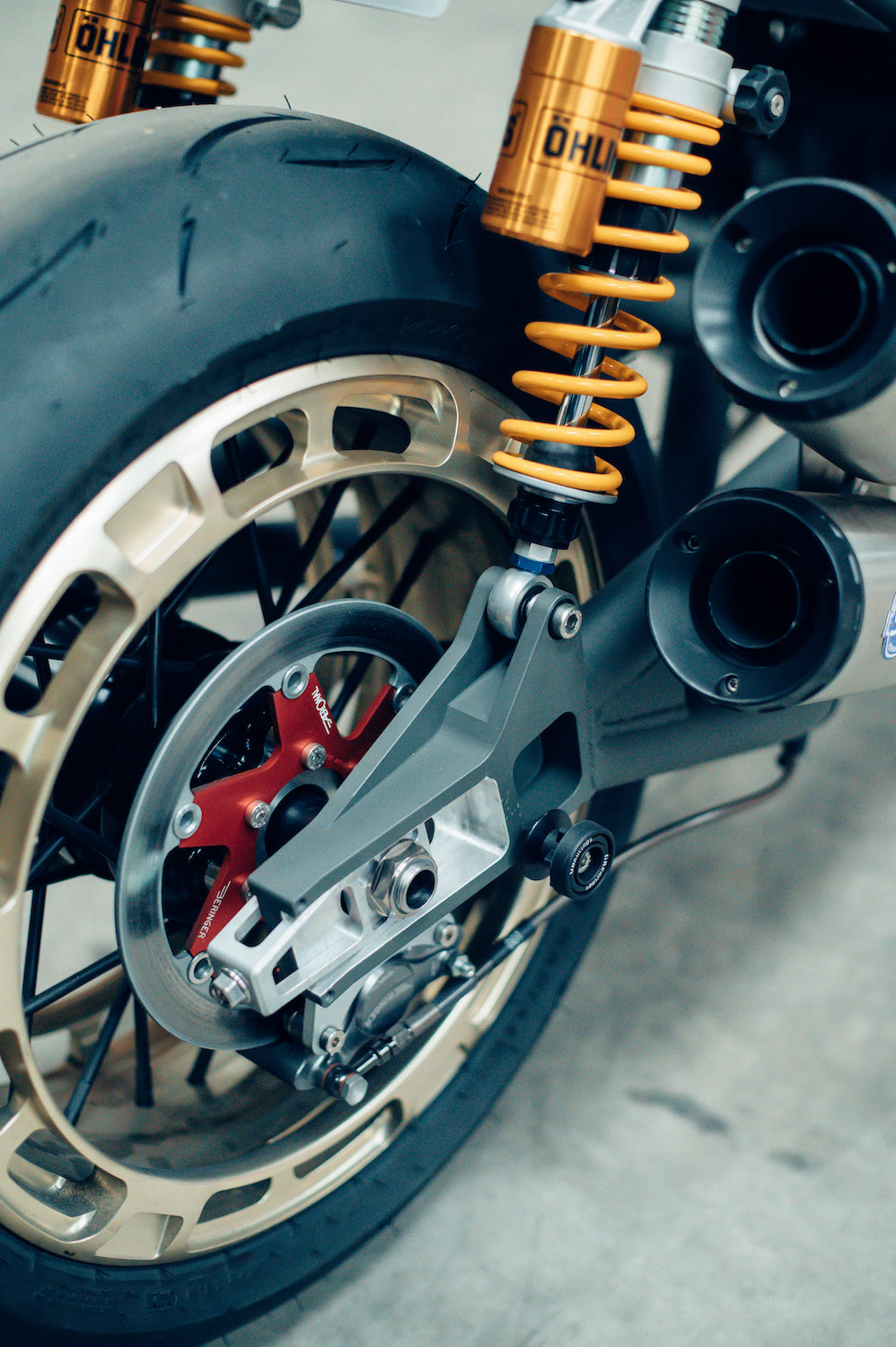 Replica Bol d’Or 750cc yokes are adapted to 43mm Öhlins forks, with Brice making a bold move for the braking system – the same as Apaloosa’s, actually, if you can believe it.

“I called Etienne to get their 4D braking system the same system I used on Appaloosa,” he adds.

“Etienne is always motivated for technical challenges. So, we played with different colors on the components to work with the AMA mood. And then, because I removed the ABS module, I had to find another way to get the speed signal on the bike, and the solution was a Motogadget Moto Scope Mini.” 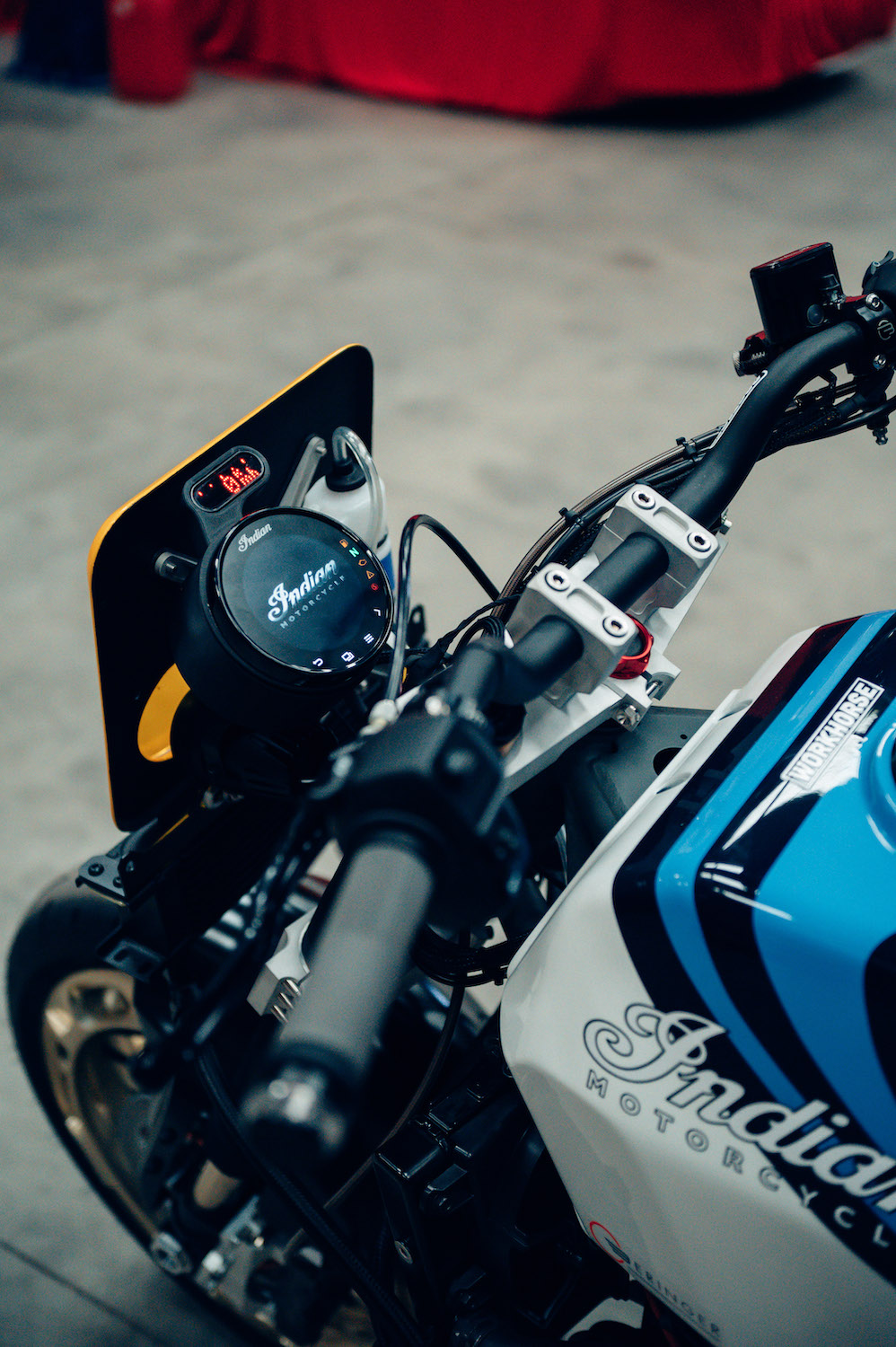 Other neat features include the 3D-printed intake (to accommodate the race filters) and Two Custom aluminum gas tanks (one under the tank cover and the other hung under the seat unit), creating a 14-liter akin to the original machine inspiration. 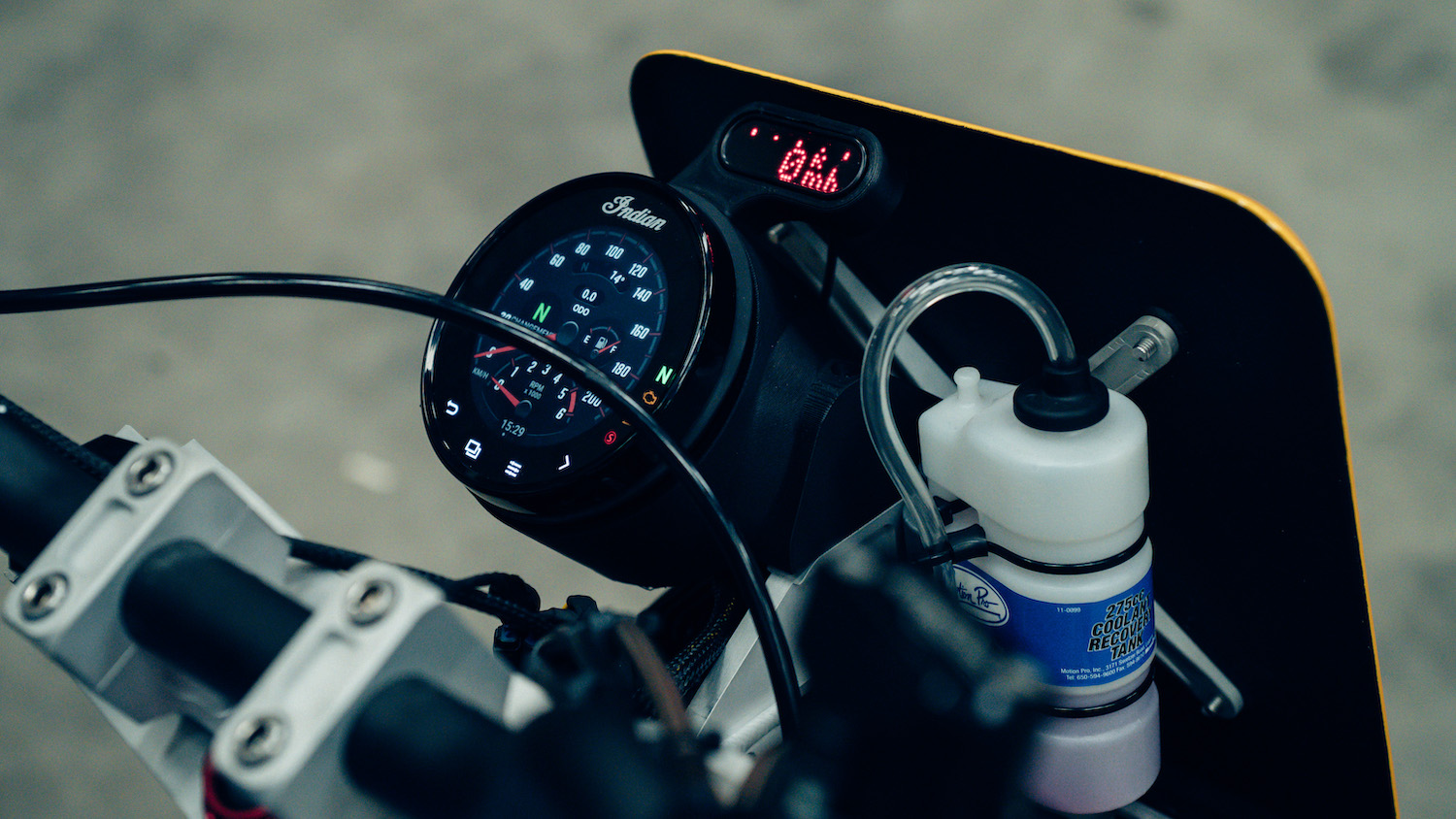 Top the whole kit-and-caboodle off with an exhaust fabricated from stainless steel pie cuts and capped off by “a couple of modified slip-on S&S Cycle Grand National mufflers,” the bike was ready for the final aesthetic makeover: the paint job.

“The amazing paint job designed by Axecent in Japan has been applied by my friend Fabian who’s near to my workshop,” finishes Hennebert.

“This build is aggressive, massive, and a real pleasure to ride. I had a lot of fun testing this ride.” 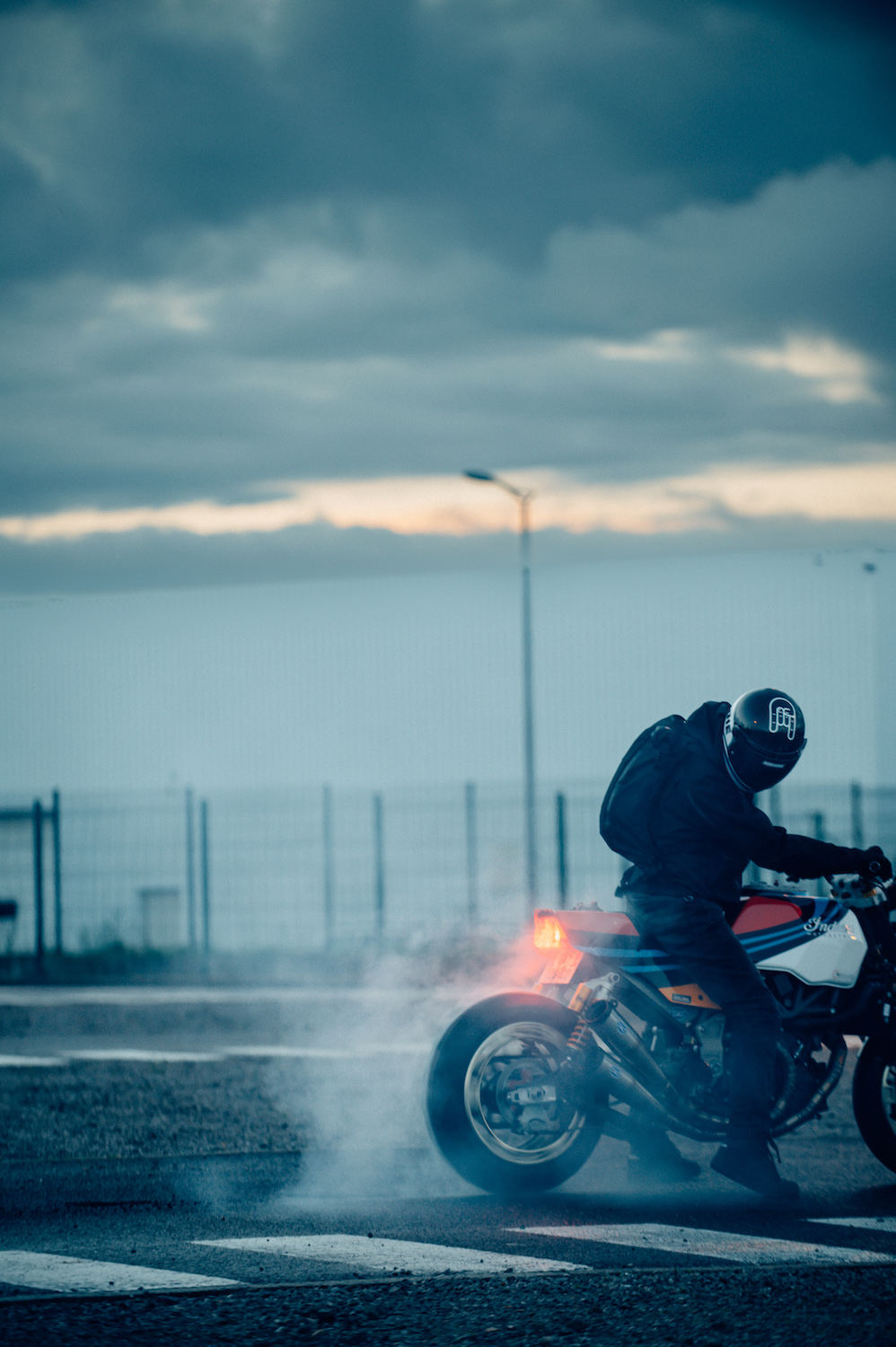 Here’s a list of the further materials used in the build of the FTR AMA: 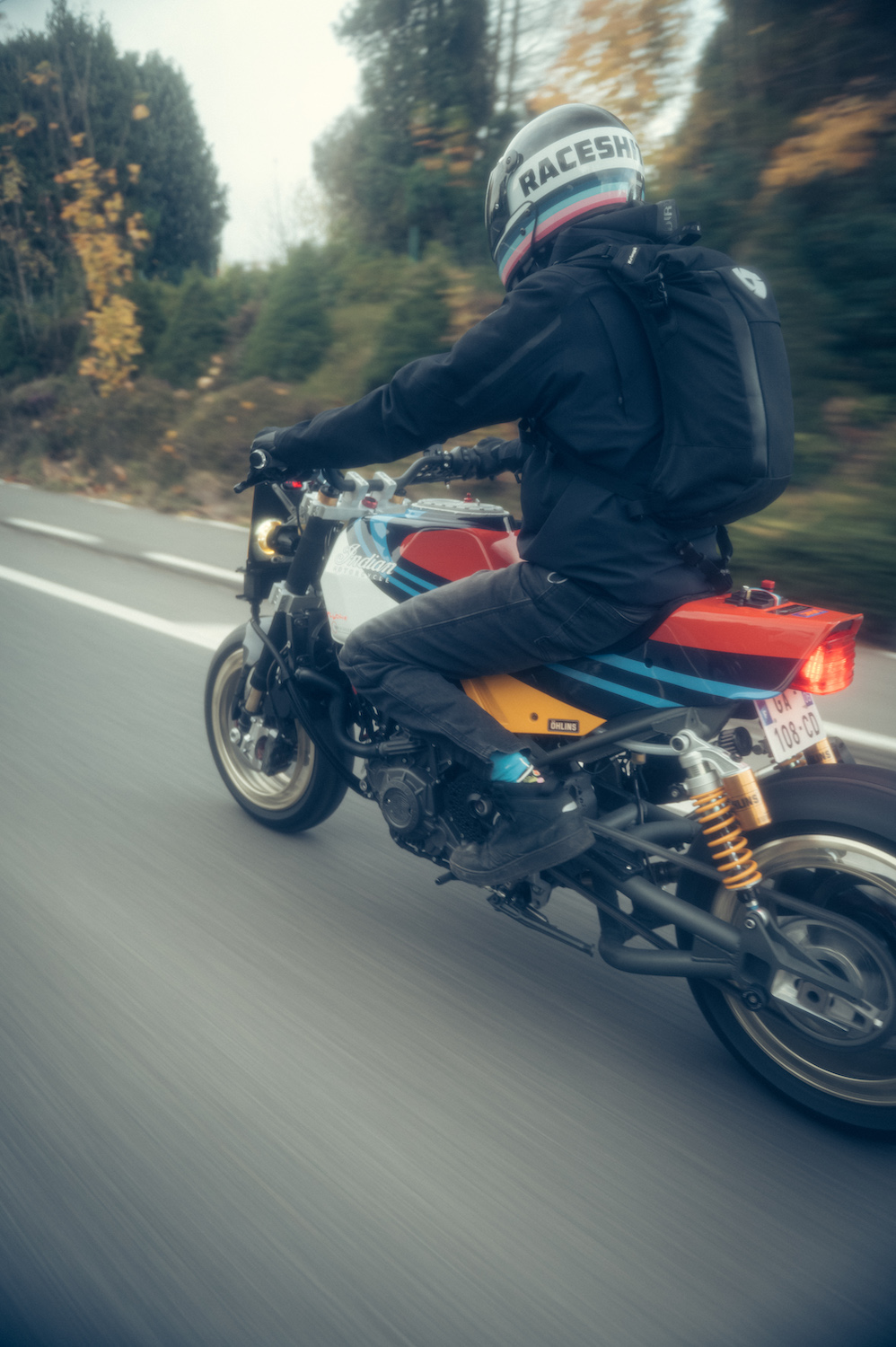 We think this build is about as kickass as it gets and want to know what you think; comment below, subscribe to our newsletter for more stories like this, and as always – stay safe on the twisties.

This article was originally published by Webbikeworld.com. Read the original article here.
Share
Facebook
Twitter
Pinterest
WhatsApp
Previous articleREVER updates its moto-navigation app to include hazard warnings
Next articleMotoAmerica: Vance & Hines To Field Team for King of the Baggers (KOTB)