It’s a little difficult to decide really. Outwardly it looks more van but inside its definitely more people carrier – a full nine seater including the front bench.

While it can carry all the family – or most of the football team – it can do it all under electric power as well.

It gets its van-like looks because the e-SpaceTourer is based on the Dispatch van and it comes in two trim levels, with five, seven or eight seats in Flair trim and upgrade to Business and you get the full nine seats.

Either is probably more suited to the taxi trade rather than as a family conveyance – it’s a big piece of kit to park on the drive or outside the house while it is not the most attractive when it comes to looks.

It uses a 134bhp electric motor and 50kWh battery – which also powers the small Vauxhall Corsa-e and there’s the rub. The e-SpaceTourer is much bigger and heavier so range is around the 140 mile mark.

Whether it’s a measure of the market or slow sales, Citroen has dropped the price of the nine-seat Business Edition by more than £14,000 over the past few months to a starting price of £34,4955.

The upmarket flair trim adds some luxuries but comes in at more than £47K and we are not convinced that families – or cab companies – would go for that in any great numbers.

What do we think?

Well, there’s plenty of room and the kids love it. They pretty well like anything that looks and feels like a bus – unless it’s an actual bus.

The three driving modes are Eco, Normal and Power and this is the first EV I have switched to Eco more often to help eek out range. This mode reduces the power output and limits the air conditioning and heating which is not necessarily ideal in the middle of winter.

But long nights and short days take their toll on the battery when you are running, lights, wipers etc as well as carrying a lot of people.

Normal offers optimum range and performance and to be honest I’m not sure why I would want the Power mode. It apparently provides extra oomph for overtaking, but not so you would notice during everyday driving.

There are, however, two energy recovery modes with an enhanced option to maximise the regenerative braking system.

The e-SpaceTourer’s van heritage also means that it’s not very light on its feet with a top speed of just 80mph and a 0-62mph acceleration time pf 13.1 seconds. You can certainly live with that given its carrying capacity, but a 143 mile range? – not so much.

Also, in bleak mid-winter, that range is more realistically 120 miles based on our time with the car. It does support fast charging though so an 80% charge on a 100kW charger is possible in half an hour.

We have a Project EV 7.4kW home wallbox which fully charges the battery in under eight hours, so plug in and bedtime and you’re ready for the off in the morning.

Inside, the e-Spacetourer is much the same as the diesel version with a minimalist interior and flexible seating which means you can actually convert it into something more like a van if you need to carry a lot of cargo on occasions. 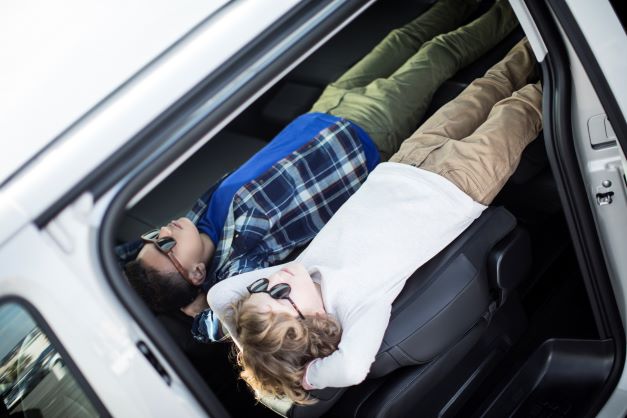 Removing the third row of seats opens up an impressive boot volume of around 2,380-litres. The second row can also be removed for a maximum space of almost 400-litres. That tailgate has rather a long reach so don’t park too close to a wall or you’ll impale yourself on it!

The dashboard and steering wheel are remarkable free of buttons and there’s a 7-inch touchscreen, with shortcut buttons to help uncomplicate things. All models feature DAB radio, Apple CarPlay and Android Auto as standard.

There are plenty of storage cubbies around along with 12-volt and USB sockets.

Given the price difference it’s hard to make a case for the expensive Flair model but Business trim brings an awful lot of car and space for the money. 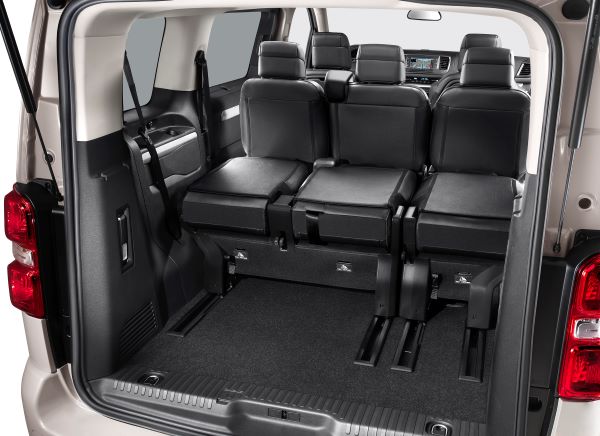 There are extras you can add, such as reversing camera, parking sensors, blind spot monitoring etc, but watch out – you don’t want to leap over that £32K threshold.

Good news also in that there’s no tax to pay and you’ll save on city congestion charges.