As Nissan overhauls its roadmap to EVs, is it cutting out gasoline engine development? So far, Nissan hasn’t been among the growing group of global automakers to put an end date—estimated or not—on the sale of new vehicles with internal combustion engines.

If a Monday report from Nikkei Asia proves true, Nissan could be closer to seeing that sunset for tailpipes—in non-electrified forms, that is.

According to the report, Nissan will become the first major Japanese automaker to announce the end of internal combustion engine development in all major global markets—except the U.S., where it would continue on a limited basis, primarily for pickup models.

There are currently two pickups in Nissan’s product line, the V-6-powered Frontier and the larger, V-8-powered Titan. Neither of them are offered in hybrid or electric form, although according to a report last year Nissan may be considering a compact electric truck.

Nissan has already halted development for traditional gasoline models for Europe—partly due to daunting Euro 7 regulations for emissions that will be phased in starting in 2025—as it shifts toward its e-Power series hybrid tech. Nissan last year announced that an engine especially designed for use with e-Power had achieved an impressive 50% thermal efficiency through its restricted operating range. 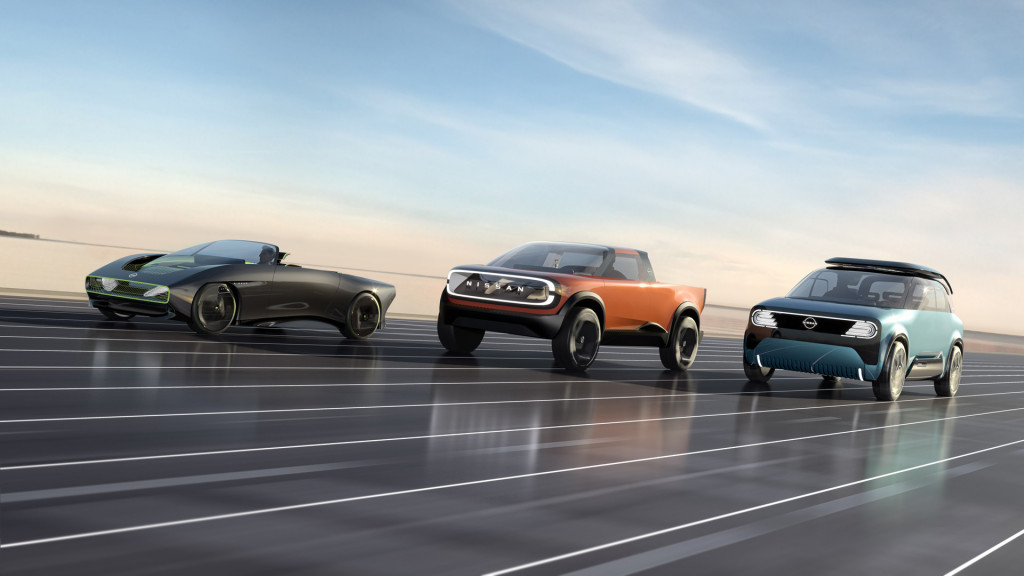 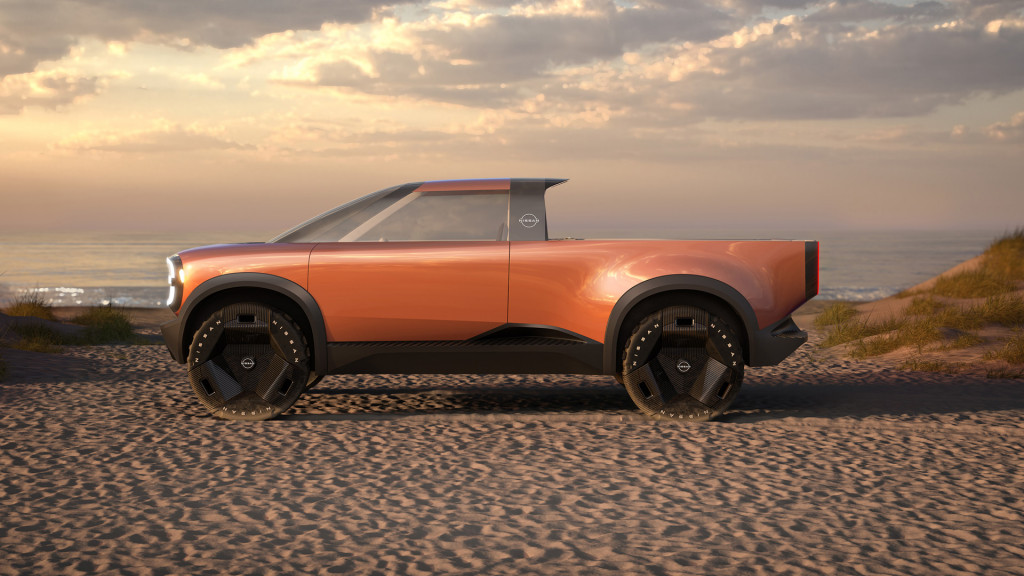 The automaker in November announced its Nissan Ambition 2030 plan, which is aiming for 23 electrified models for Nissan and Infiniti, including 15 all-electric vehicles, by 2030. It said that by 2030 it intends for electrified models—EVs and hybrids—to make up 50% of its global sales by 2030.

That plan is to be enabled through an investment of approximately $17.6 billion over five years. Nikkei claims that $4.3 billion of annual gas-engine R&D budget might be redirected toward EVs and related tech. It’s not clear whether that would have already been included in the recent investment or whether this is an additional amount.

From a presentation last month extending the plan out to what it means across the Alliance companies of Nissan, Renault, and Mitsubishi, there will be a more than $26 billion (23 billion euro) investment over the next five years—leading to 35 new EVs by 2030. 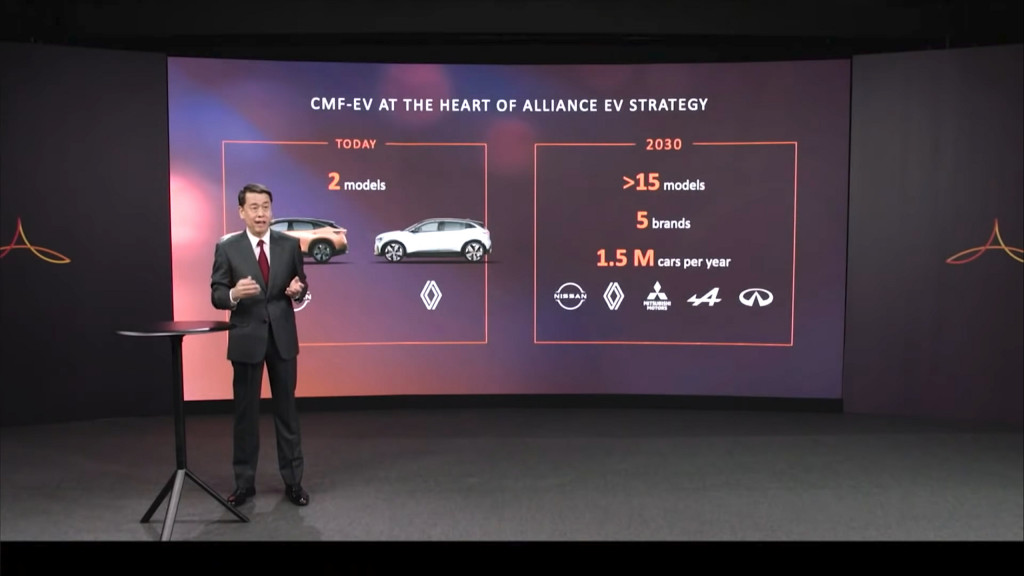 About 90% of these models will be built on five common platforms—including the CMF-EV platform that underpins the upcoming Nissan Ariya, and a new CMF-BEV platform, due to underpin the Renault 5 and a Nissan Micra successor, that Renault CEO Luca de Meo said will be “the key to democratize electric cars.” It will have more than 60% of its components carried over from the CMF-B platform that’s already the basis for Euro-sized compact ICE models.

The work together, including telematics and software as a platform will culminate with the launch of what the companies call “the first full software defined vehicle” by 2025—a vehicle that it says could open “new fields of value for the Alliance companies.”

At that time, Nissan added more details in a vision for how it would work with alliance members Renault and Mitsubishi. In the arrangement, Nissan will lead solid-state battery technology development to benefit the other members, while Renault will lead the development of a “common centralized electrical and electronic architecture.”

Nissan aims to mass-produce all-solid-state battery technology by 2028, which will provide double the battery energy density of current lithium-ion batteries, with charging time cut to a third the current times. Nissan, with the whole Alliance, is aiming to cut battery costs by 50% by 2026 and by 65% by 2028. Beyond that it hopes to get battery costs below $65/kwh, on a pack basis, which it sees as the number necessary for cost parity with internal combustion. 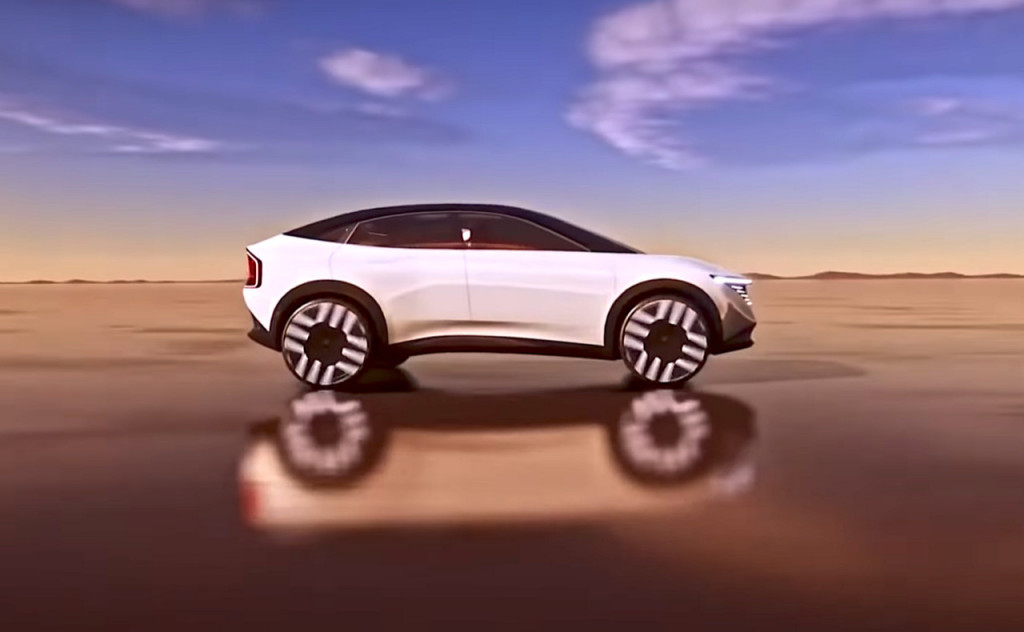 Altogether the Alliance partners plan to secure 230 GWh of global battery production capacity by 2030—enough to make several million EVs per year. In 2019, the Alliance sold about 10 million vehicles, so it leaves room for a significant amount of gasoline models continuing on at that time.

The answer could also lie, to some degree, in a technicality. Nissan might cease development of internal combustion engines but still buy them from Mitsubishi; or it might continue to build them as long as they’re compliant. Mitsubishi has said that it aims for 50% or more of its global sales to be electrified—so hybrids, plug-in hybrids, and battery electrics, combined. 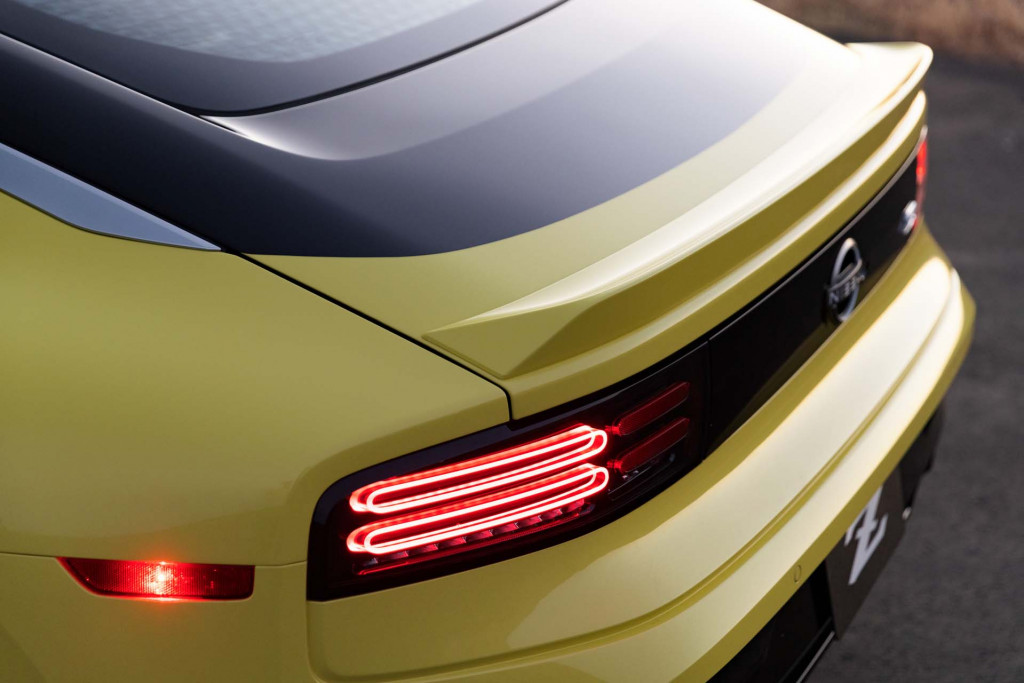 Market momentum, whether that be in the U.S., in Europe, or elsewhere, may be the driving factor. Nikkei cites LMC Automotive data suggesting that global sales of EVs are expected to grow by 10 times over 12 years, with sales projected to surpass those of gas models by 20% in 2033. Given the reception of the Rivian R1T and Ford F-150 Lightning, it’s easy to imagine that by then, even in the U.S., gasoline, mass-market pickups might be driving into a sunset of their own.

We’ll update this piece if and when announcements are made.