Most people remember Star Wars: Episode I for the colossal irritant that was Jar Jar Binks, but it seems Matthew Pearson, creator of the world’s first race series for flying electric cars, never forgot the film’s podracing scenes.

The Phantom Menace’s single-seater, anti-gravity contraptions were the stuff of pure sci-fi in a galaxy far, far away, but Pearson’s Airspeeder series is well on the way to making something very similar a reality.

Move Electric spoke to the man himself – that’s Matt Pearson, not Jar Jar – to uncover the 8 things you need to know about the F1 of the sky. 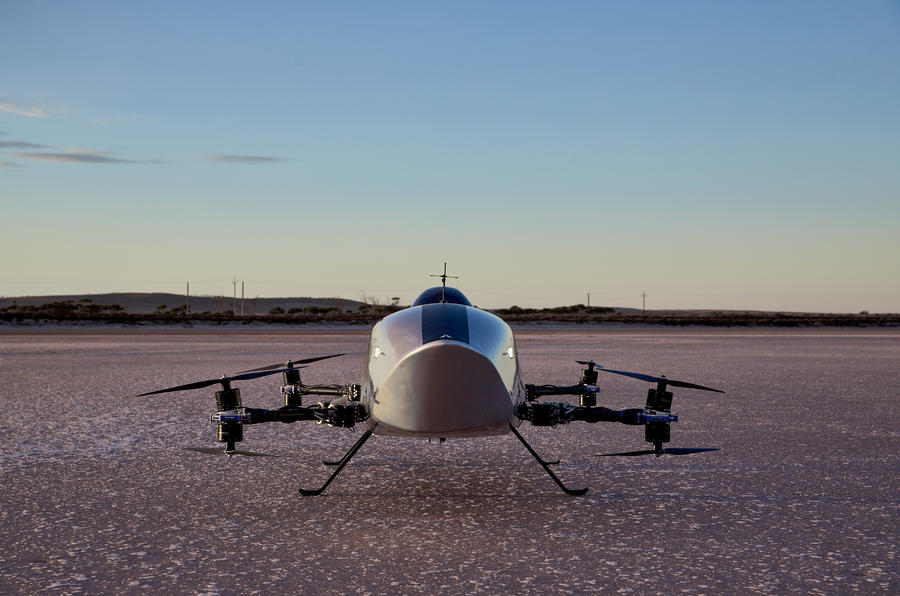 Come on, when was the last time you saw a car with propellers instead of wheels? These are eVTOLs, which stands for Electric Vertical Take Off and Landing, but if somebody asks you to describe one the easiest thing is to say they look like four-metre-long drones. In fact, the latest model – the Mk3 – can be flown remotely.

Despite the sci-fi vibes, they also bear more than a passing resemblance to early single-seater racing cars – yes, cars! – of the 1950s and ’60s – but there’s a good reason for that. “Those racers hadn’t discovered downforce yet so they did fly sometimes,” says Pearson. “It’s efficient, any fuselage is that kind of cigar shape, so it stands to reason that it’s going to stick around.”

With more testing due to take place later this year this isn’t the Airspeeder’s final form, and Pearson has already identified some areas for improvement. “We’re really working hard on the CFD (computational fluid dynamics) analysis and the design of the fuselage to get a lot more efficiency out of the vehicle,” he says. “There are other differences that are coming over the next few iterations where we use more lifting surfaces.”

2. They’re faster than a Ferrari

Made mostly of carbonfibre, each Airspeeder weighs just 130kg without a pilot, which is just a sixth of a Formula 1 car, and with 320kw (the leccy equivalent of 429bhp) at the pilot’s disposal they’ll hit a top speed of 125mph. That’s a good chunk slower than a current Red Bull or Mercedes, but with a thrust-to-weight ratio that would embarrass an F-15 Strike Eagle fighter jet (3.5 compared to 1.2), they’ll pull up to 5G through the tightest turns.

The Mk3’s 0-62mph time of 2.8 seconds also means it’s faster off the mark than a Lamborghini Huracan Evo or Ferrari 812 Superfast – but unlike those old-fashioned Tarmac-dwellers an Airspeeder isn’t constrained by something as mundane as gravity… 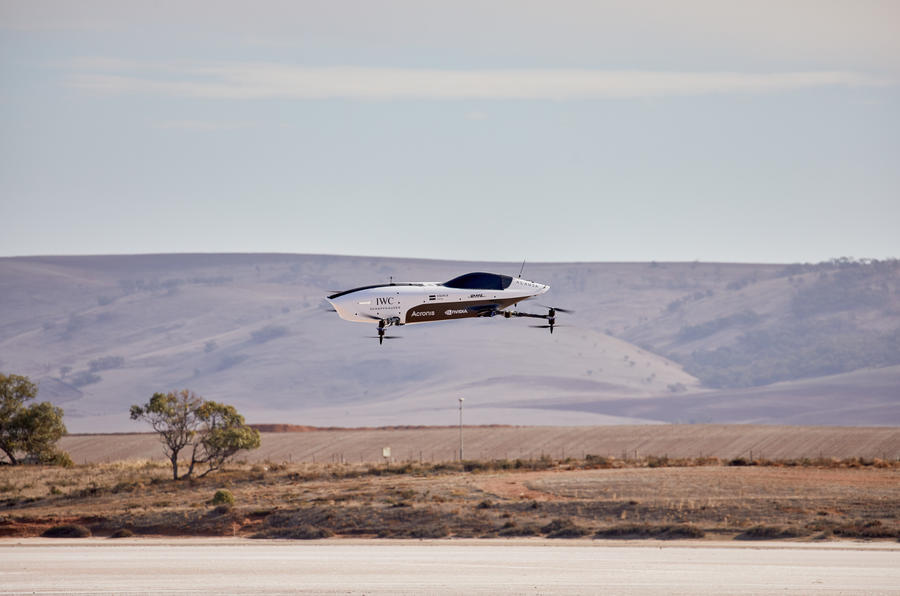 Airspeeders can fly as high as 500 metres but that would make it hard to see what was going on from terra firma, so races will take place between 10 and 40 metres off the ground.

Besides, Pearson sees it as more of an armchair sport than a spectator one: “There will be invited guests and a small audience on site with the crew, but we’re mainly designing this for streaming so that everyone gets to enjoy what we’re doing,” he explains.

That also means they’re not too constrained by access or facilities when it comes to choosing locations for the events, so there’s not going to be a Gatwick Grand Prix. Pearson’s plan is for races to take place on multiple continents over land, sea and mountains, sometimes all within the same race. 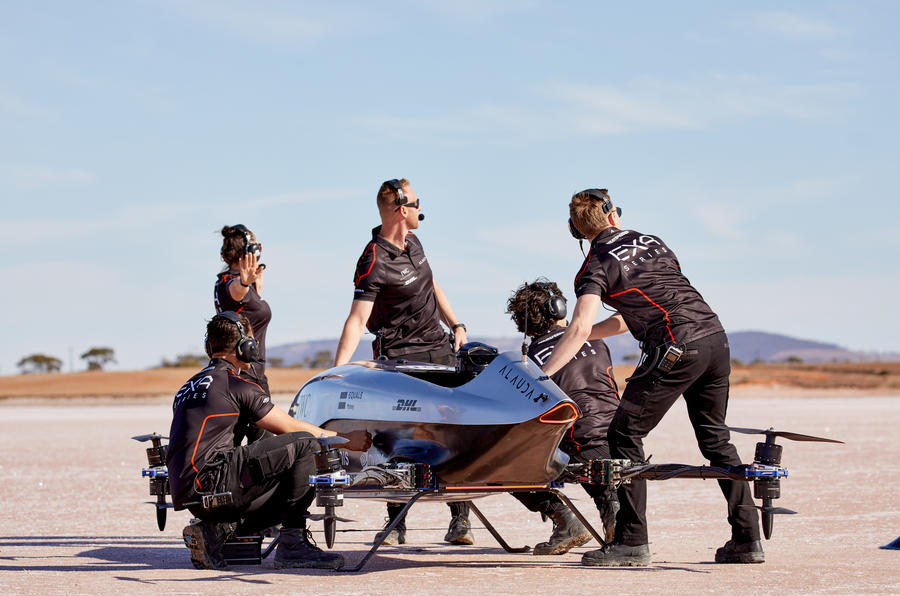 Airspeeder has just completed its latest successful test flights on the salt flats of South Australia, but everything is building towards the first three races, which are due to take place on augmented reality sky-tracks before the end of the year.

This unmanned EXA series is all about finding out what happens when you fly these things at close quarters, so each one will have a telerobotic avatar in the cockpit that will act as the eyes for the pilots on the ground. These ‘Aviators’ are also packed with sensors that will tell the Airspeeder team how human pilots are likely to react to the extreme G forces that they’ll experience.

“There are things you can do with a multicopter that you can’t do with a plane or helicopter,” says Pearson. “Understanding what that’s really going to be like is something that you can only really get when it’s real racing.”

Volunteering to be one of the first people to fly an Airspeeder takes serious guts, but Pearson says he’s not short of applicants, with plane and helicopter pilots, and even “some motorsports personalities” keen to be added to a long waiting list.

“We get a lot of applications but we’ve also got amazing ex-military test pilots as part of our team,” he says. “They’re not just excited about flying the vehicle, they’re also equipped to give us the feedback that we need on how these things work.”

There’s no doubting the potential danger involved, but each Airspeeder is equipped with 22 different sensors that are designed to prevent mid-air collisions. Radar, Lidar, machine vision and 5G connectivity create a kind of forcefield around each one, ensuring they can get close, but not too close, with the first manned races expected to take place in 2022. 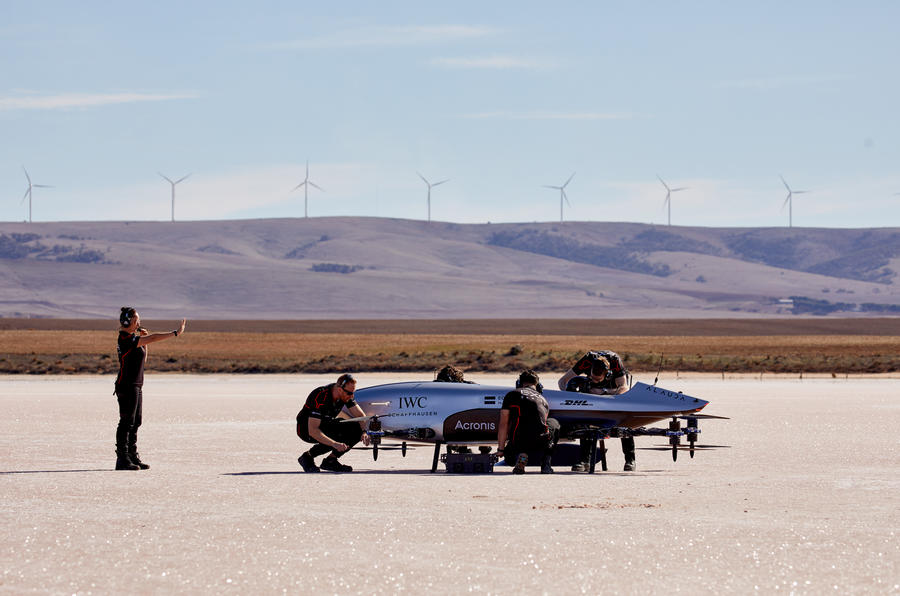 6. There will be pit stops

Without tyres to change you might think there would be no need for pit stops, but current battery technology can’t keep a Mk3 in the air for more than about 15 minutes at a time, so Airspeeder’s team of motorsport experts have been working on getting the time it takes to change a battery down to just 20 seconds. That’ll make 30- or 45-minute races possible.

“If it wasn’t necessary it would have been a great thing to add,” says Pearson. “Pit stops are a fantastic part of the drama and strategy of motorsport. It’s something that other electric sports have thought about doing but haven’t been able to perfect. I think it’s going to be an awesome thing to watch.” 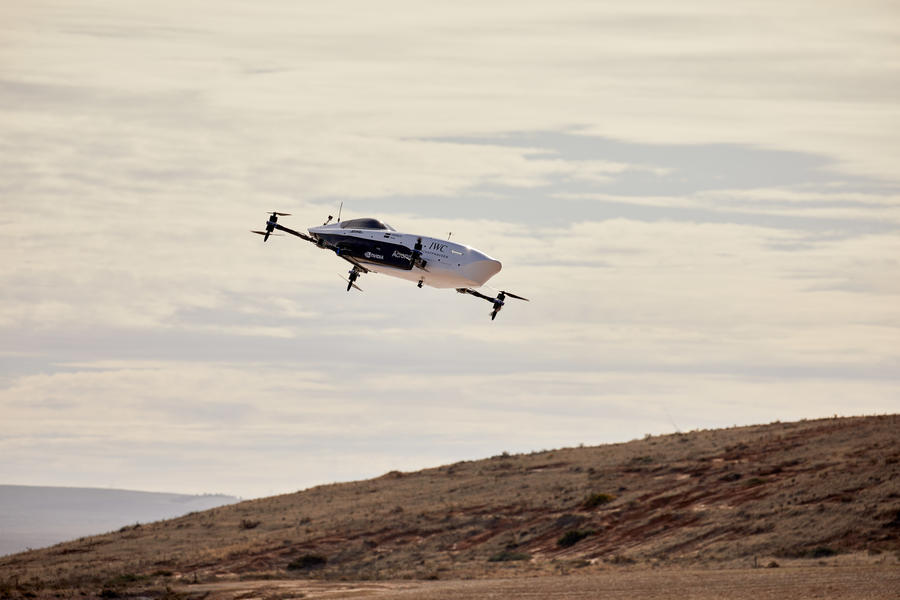 7. There are big brains behind the scenes

Pearson made his fortune as co-founder of an online business management tool called Honcho, but he says he’s always been fascinated by aerospace. “I vowed to myself to put something in space and build a flying car,” says the 34-year-old, who’s also COO of Fleet, a company that’s just about to launch its sixth satellite into orbit.

Pearson’s Fleet co-founder is rocket scientist Flavia Tata Nardini, and he’s enlisted similarly impressive brains in order to get his second ambition off the ground.

The Airspeeder team includes people who have worked for McLaren, Brabham, Jaguar Land Rover, and Rolls-Royce, while project lead Brett Hill was previously a flight dynamics specialist on Boeing’s 747 programme. 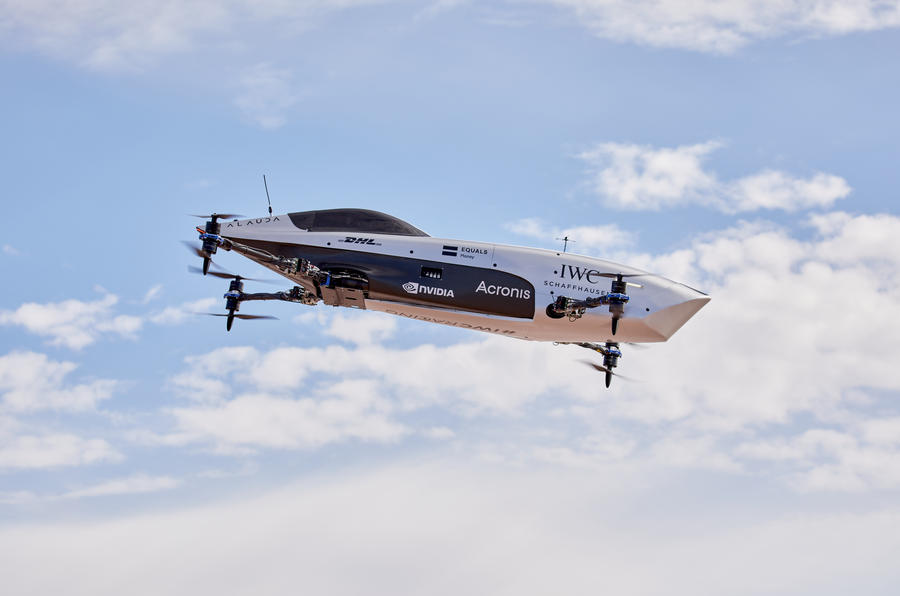 8. It’s about more than just racing

All of this might make Airspeeder sound like the vanity project of someone with more money than sense, but Morgan Stanley reckons the eVTOL sector will be worth $1.5 trillion (£1.1tn) by 2040, so perhaps it’s just ahead of its time.

Pearson believes competition is the fastest way to drive innovation, with numerous technological developments in F1 and other motorsports eventually filtering down to the cars that mere mortals drive. Active suspension, energy recovery systems, and flappy paddle semi-automatic gearboxes all owe their existence to the world of racing, and Airspeeder could be a key cog in making eVTOLs a going concern in our skies.

“I think people recognise that racing is usually where any new technology in mobility is going to be seen first,” he says. “It’s a good way to show the world and build acceptance, even before they’re flying past your window.”

This is the latest in a series of articles set to be published by Autocar in the coming weeks exploring e-mobility under the Move Electric name, a new editorial channel created by Haymarket, our owner. We intend to cover electric cars, motorbikes, scooters, bicycles and more, as well as exploring themes around electricity generation and electric lifestyles. Content will include features, reviews and opinion. If you have any thoughts about what kind of content you’d like to read – or that you wouldn’t like to read – please use the comments section below to provide feedback.

E-scooters: the future of city transport, or an urban menace?

Inside the Industry: How urban e-scooters are riding the zeitgeist