Lamborghini is preparing to update the Urus SUV for the first time since it was launched in 2018, and it has now been confirmed that a power hike and reduced kerb weight are among the changes.

Company CEO Stephan Winkelmann told Autocar that there will be two important rounds of updates for the Urus before 2024. “We have two steps,” he said. “The first is the facelift, which adds more power and less weight – this is the idea – for the performance-oriented car. And then in 2024 we will have all our line-up hybridised, and the Urus is an important part of this.”

That means that, as well as the updated 2023 Urus weighing slightly less than 2200kg at the kerb, it will pack more than the current car’s 641bhp courtesy of revisions to its twin-turbocharged 4.0-litre V8 – though likely only slightly more, given it is already the most powerful car from the Volkswagen Group to use this engine. It is likely the updated car will be named the Urus Evo, as was the case when the Huracán was similarly uprated in 2019.

Following this round of updates, the Urus will receive a plug-in hybrid in 2024 before it is replaced in the second half of the decade by an all-electric successor.

Electrification will be key to maintaining the Urus’s strong sales figures worldwide. It has been Lamborghini’s best-selling model for the past three years (its first three on sale), outselling the Huracán by almost two-to-one in 2021. However, increasingly stringent emissions regulations risk the SUV falling out of favour, particularly with urban buyers, in various markets.

The PHEV variant of the Urus is likely to feature a variation of the powertrain used by its Porsche Cayenne Turbo S E-Hybrid sibling. Mating the Volkswagen Group’s twin-turbocharged 4.0-litre V8 to an electric motor, the system produces combined outputs of 671bhp and 664lb ft and offers an electric-only driving range of 19 miles while cutting CO2 emissions down to 90g/km.

As well as the electrified Cayenne, the Urus also shares its MLB Evo underpinnings with the Audi Q8, Bentley Bentayga and Volkswagen Touareg, each of which now offers a PHEV option.

“After the hybrid car, the Urus will be fully electrified,” confirmed Winkelmann, adding that it will be a “completely new car”. He did not confirm a timeframe, but given the firm’s first EV is scheduled to launch in 2028 and the Urus successor will be the second, it is unlikely to arrive long before 2029. It is not clear if the Urus will be updated again in its current lifecycle. 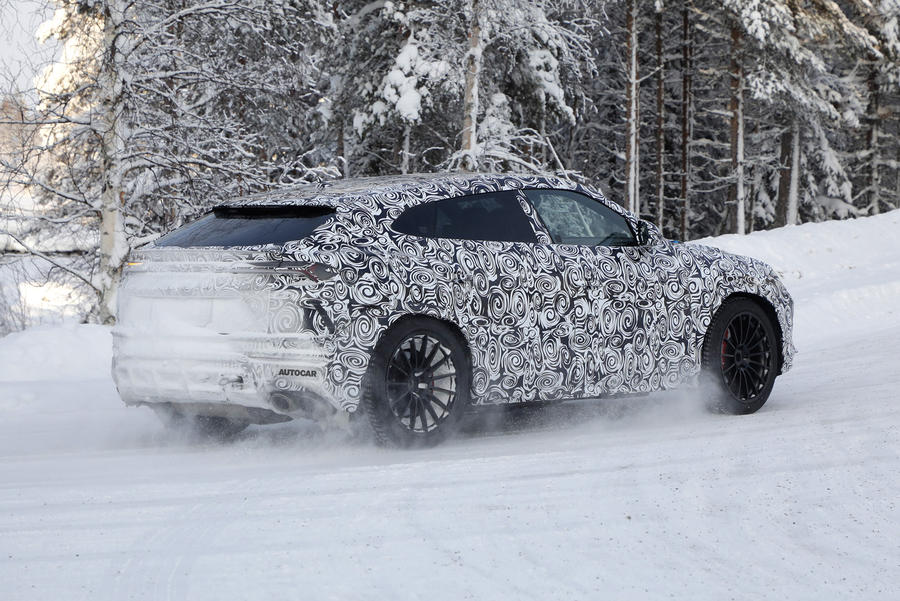 Winkelmann’s comments follow the beginning of winter testing for the updated Urus. A thick layer of snow and heavy camouflaging on the prototype caught by our photographers make substantial styling tweaks difficult to spot, but the front air intake area looks to have been reshaped around the lower half and, more prominently, the leading lip of the bonnet and bumper have been reshaped.

The prototype’s side panels look to be less aggressively sculpted than those of the current car, although this could be an intended effect of the camouflage wrap, and while the rear-end design looks to have been left untouched, we can expect a reshaped lower diffuser and new brake-light designs to feature.

Expect additional changes for the updated Urus to bring subtle improvements to the cabin environment, infotainment system and chassis – and for them to be accompanied by a slight price increase over the current car’s £160,000 starting price.