So you want to read about the 2023 Hyundai Kona, huh? Well, you’re going to need to be more specific than that because it’s basically three different cars … maybe four. Although all share that delightfully Hawaiian name and rock variations of the same funky, subcompact SUV look, each is quite different in terms of their purpose and how they’re powered. For most, a “Hyundai Kona” will be the car you see above: a subcompact SUV with a modest engine, a modest price and a generous amount of equipment and warranty coverage. It boasts distinctive styling, great tech and a surprisingly fun driving experience whether you get the base engine or turbocharged upgrade. It’s also one of the least spacious subcompact SUVs, but that’s not enough to prevent us from recommending it.

OK, now things start to fork. As fun as the bread-and-butter Kona can be, the sporty N Line includes that turbocharged upgrade and spices things up further. The Kona N then turns the dial up to 11: It’s basically a hot hatch with big power, big noises and just big fun. It’s a riot. The 2023 Hyundai Kona Electric definitely doesn’t make big noises and is certainly less fun, but it delivers excellent electric range for the money (yes, even though it’s much pricier than the other versions). Unfortunately, the loss of federal tax credits means that price isn’t as competitive as it used to be, especially since the Chevrolet Bolt is cheaper and does qualify for the $7,500 credit.

After a substantial refresh last year, the Kona carries over into 2023 with only feature availability updates. Blind-spot and rear cross-traffic warning are now standard, along with a rear USB port. The SEL trim gains a standard power driver seat and auto up/down front windows, while the SEL Convenience gains navigation and the bigger 10.25-inch touchscreen. The N Line Technology package has been discontinued. The Kona Electric, meanwhile, now comes standard with an eight-way power driver seat, heated front seats, the auto up/down windows and rear USB port. Its trim levels are also now the SE, SEL and Limited, though they basically correspond with the previous three. 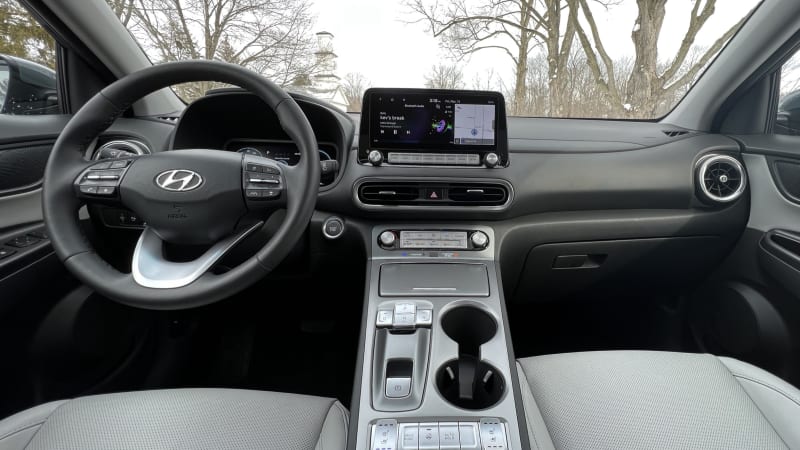 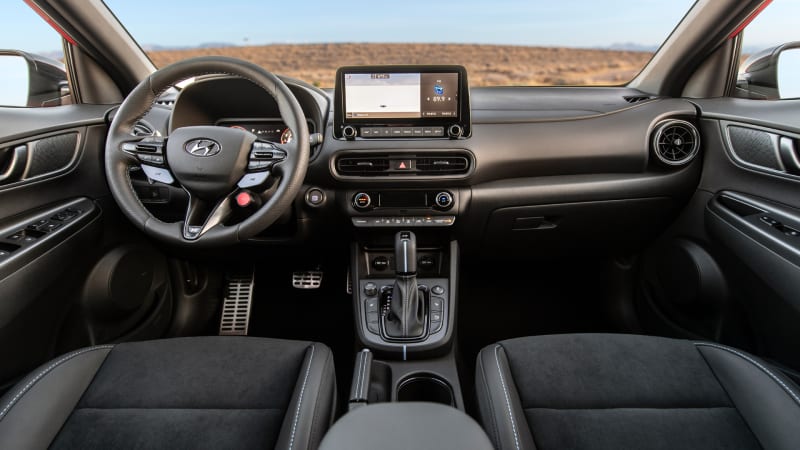 What are the Kona interior and in-car technology like?

For the money and for this humble segment, the Kona interior is just fine. Plastics are unremarkable and the design is a bit blah, especially since Hyundai no longer offers vibrantly colored trim options or distinctive houndstooth standard upholstery. It’s all very monochromatic now. At least the Kona Electric (above left) spruces things up with a richer standard upholstery, light-colored leather and silver trim, plus a unique rising center console and push-button shifter. The new Kona N (above right) also gets nicer upholstery on sport seats plus a very cool sport steering wheel.

With either design, the low dash offers good visibility, the steering wheel sufficiently adjusts, and most trims benefit from a power driver seat that provides more adjustability than most in the segment. The driving position is also higher than a car (which you definitely notice in the Kona N), but we wouldn’t say you get the “commanding view” of the road like you’d get in a bigger crossover.

One of the Kona’s major perks is the easy-to-use infotainment system. With either the available 10.25-inch or standard 8-inch touchscreen, a user-friendly interface pairs with plenty of physical shortcut buttons, and importantly, physical volume and tuning knobs. Apple CarPlay and Android Auto are standard features on all models. Also now found on top trim levels is an all-digital instrument panel with enhanced functionality and an appearance that changes with drive mode. The IP designs also differ by model as you can see below with the Limited (below, upper left) and Electric (below, bottom left). 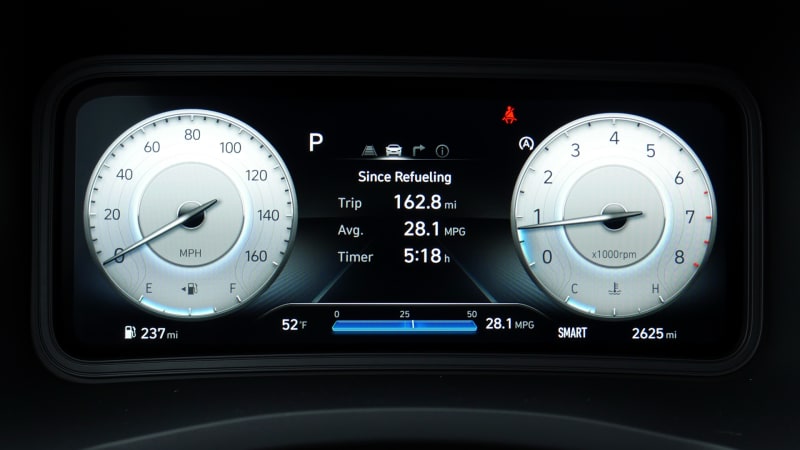 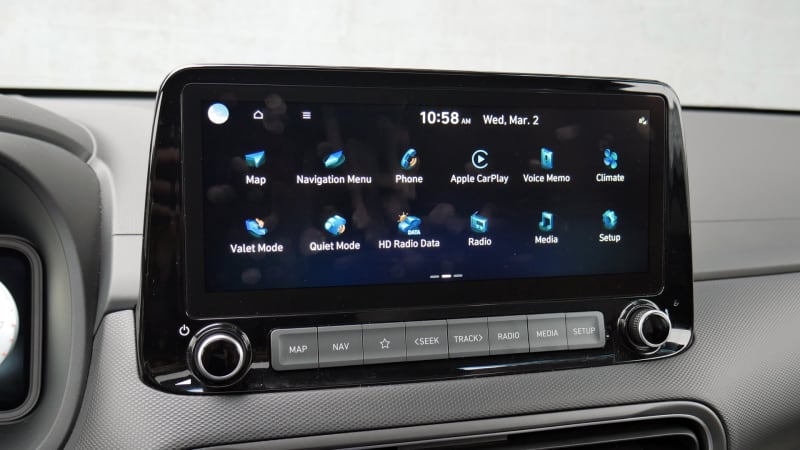 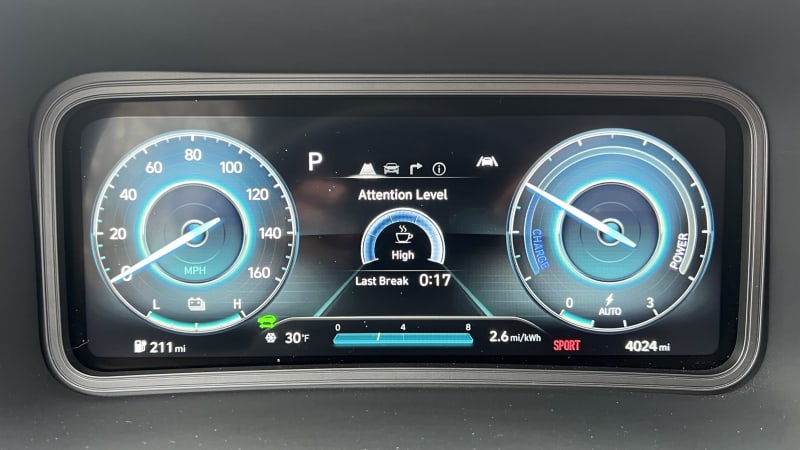 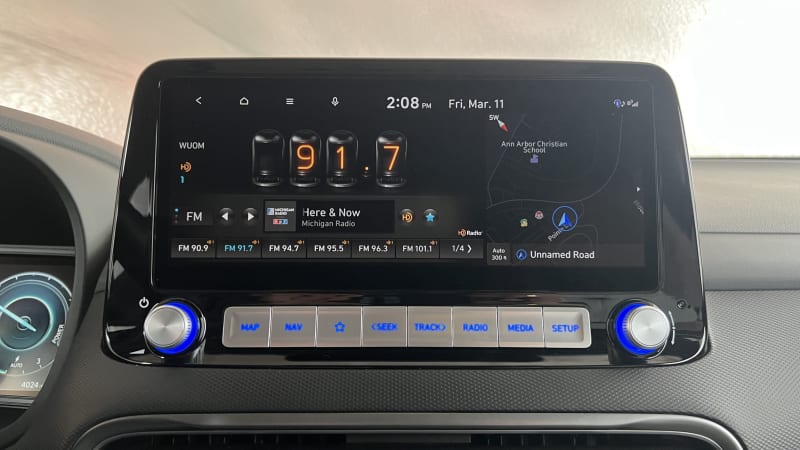 How big is the Kona?

The Kona is on the small side even for the subcompact SUV segment, so if you’re planning on using the back seat and cargo area a lot, it may not be the best choice. Even the Hyundai Venue, which is smaller on the outside, has a more useful cargo area. And among subcompact SUVs, only the Toyota C-HR is notably smaller. Effectively, the Kona is a subcompact hatchback with a high seating position.

According to the specs, the Kona has 19.2 cubic-feet of cargo space behind its raised back seat. We show you exactly how many bags that equates to in our Kona Luggage Test, but in short, it does indeed hold less than its competitors. If space is important to you, a Nissan Kicks or Kia Soul will work better, and you can also consider stepping up to the slightly larger midcompact segment with the Kia Seltos and Mazda CX-30. 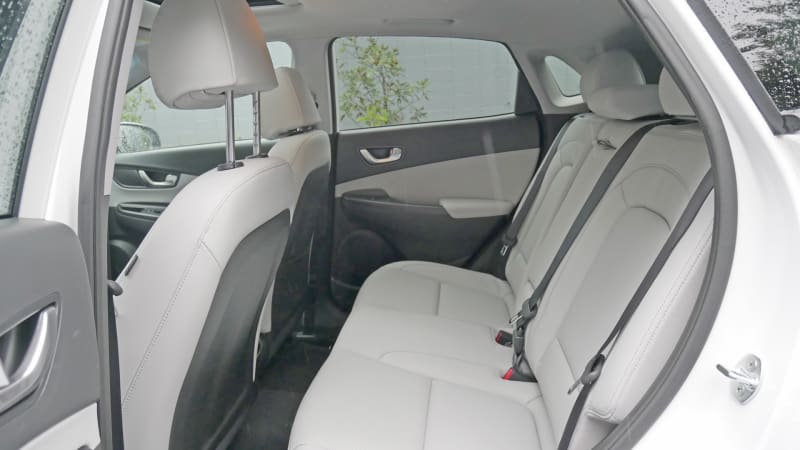 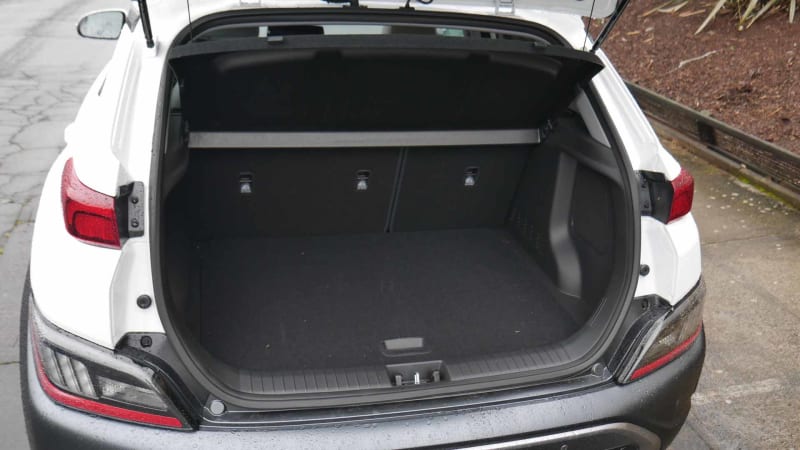 What are the Kona fuel economy and electric range specs?

This section is typically pretty simple for other subcompact SUVs, but not so the Kona as it’s available with three gas engines and an electric powertrain.

The SE and SEL trim levels are powered by a 2.0-liter inline-four that produces 147 horsepower and 132 pound-feet of torque – a typical amount for the segment. It is paired with a continuously variable transmission that Hyundai dubs “IVT,” and either standard front-wheel drive or optional all-wheel drive. EPA-estimated fuel economy is 30 mpg city, 35 mpg highway and 32 mpg combined with FWD and 28/33/30 with AWD.

The N-Line (below left in blue) and Limited get a 1.6-liter turbocharged inline-four that produces 195 hp and 195 lb-ft of torque – an amount surpassed only by the Kia Soul Turbo (barely) in the subcompact segment. It too provides a choice of FWD or AWD, but comes standard with a seven-speed dual-clutch automated manual transmission. Despite its massive power advantage, fuel economy is basically the same as the base engine: 29/35/32 with FWD and 27/32/29 with AWD. 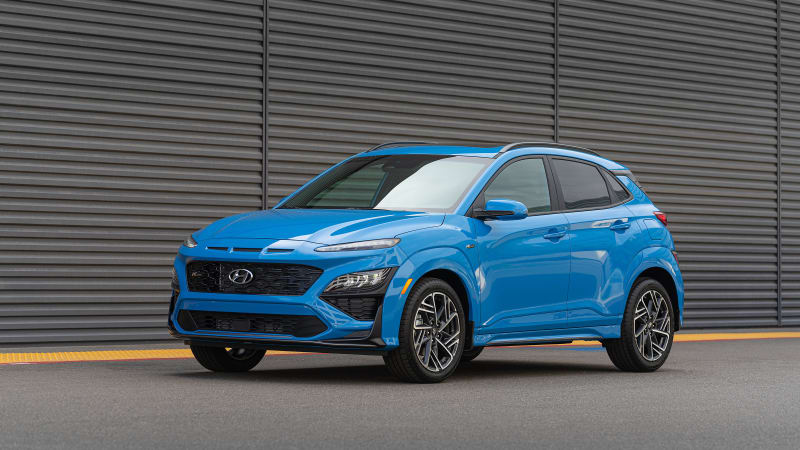 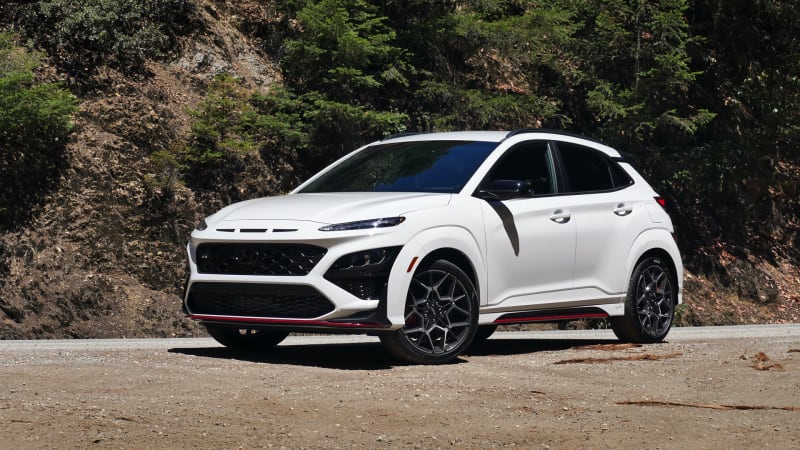 Next comes the Kona N (above right). It has a 2.0-liter turbo inline-4 that pumps out 276 hp and 289 lb-ft of torque – and here we thought the 1.6-liter blew away the competition. Nevermind subcompact SUVs, this significantly outdoes a VW GTI. The N gets an eight-speed DCT and standard front-wheel drive – all-wheel drive is not available as it would’ve increased cost, complexity and weight, and furthermore, hot hatches like the GTI are front-wheel drive any way. Fuel economy takes a dive but is still respectable at 20/27/23.

And now, for something completely different, there’s the Kona Electric (below). It too is front-wheel-drive only and boasts a single electric motor that produces 201 hp and 291 lb-ft of torque. Its EPA-estimated range was 258 miles for 2022 (we did not have 2023 estimates at the time of this writing but doubt they’d be different), which is more than many EVs including considerably more expensive ones. It carries a combined efficiency rating of 120 mpge, which makes it the fourth fourth most efficient EV. All those ahead of it are considerably more expensive. However, its recharging speed isn’t as rapid as many other EVs, especially Hyundai’s own Ioniq 5.

Considering all those powertrain choices up there, the answer is “it really depends.” In general, though, every Kona impresses with a surprisingly fun driving experience highlighted by tidy body control and well-calibrated steering. The ride is on the firm side, especially on the N-Line and N, but in a way consistent with sporty cars. There’s quite a lot of road noise, though nothing in this segment is going to be a serene cocoon.

Although power in the base engine is modest, we’ve found it to be sprightly enough and is a nice compliment to the Kona’s generally fun demeanor. We have not tried it with the new-for-2022 IVT transmission, though, so we’re not sure how that will affect its power delivery – Hyundai may use a different acronym, but it’s a CVT, and they rarely improve the driving experience. The 1.6-liter turbo in the Limited is just as potent as before, and although its DCT can occasionally be a little slow to respond when starting from a stop (and can even roll a bit on hills), it largely behaves like a normal automatic once underway.

You can read more about the Kona N in our first drive review, but in short, it’s a little box of joy that makes fun noises and packs laugh-inducing power with, vitally, a chassis up to the task of controlling it. The Kona N may be a subcompact SUV, but it has the heart and moves of a hot hatch.

As for the Kona Electric, it’s just as much of a riot to drive as all gas-powered Konas apart from the N. With Eco, Comfort and Sport drive modes, you can drive it however you like, from an electron-sipping commuter to a tire-spinning go-kart. Paddles on the back of the steering wheel let you dial in various levels of regenerative braking force. There’s not a setting for pure one-pedal driving, as you have to continue to hold the left paddle to bring the vehicle to a complete stop without using the brake pedal. And of course, your actual range will vary based on driving style and ambient temperature, but its 258-mile rating gives you a lot of room to play around before having to head to a plug.

What other Hyundai Kona reviews can I read?

The Kona N is surprisingly fun and shockingly refined. If this is the future of hot hatches, no problem. 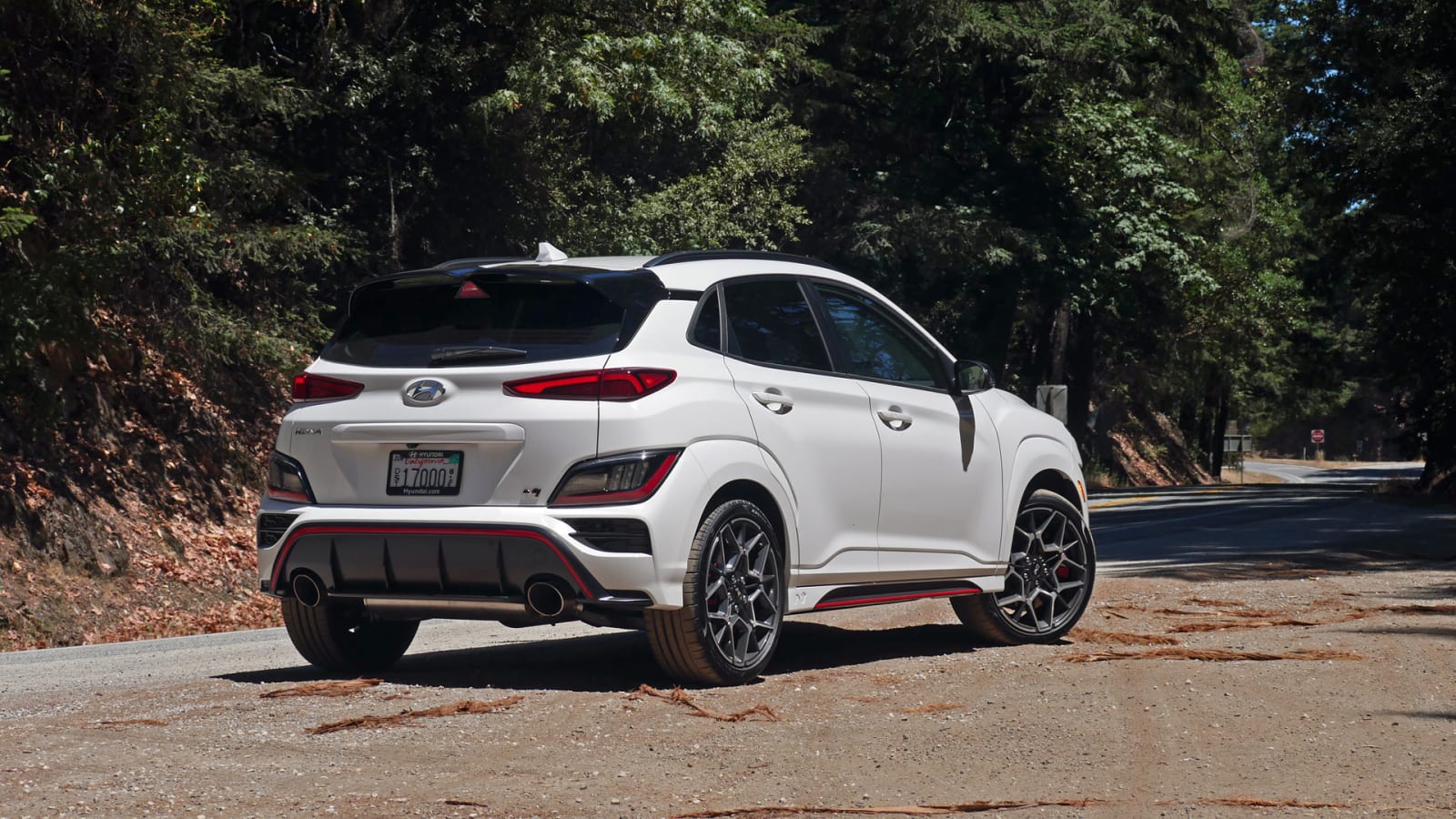 Read more specifics about the electric Kona based on a week our various editors spent with it. Though it has been updated for 2022, our impressions and the specs remain broadly the same. 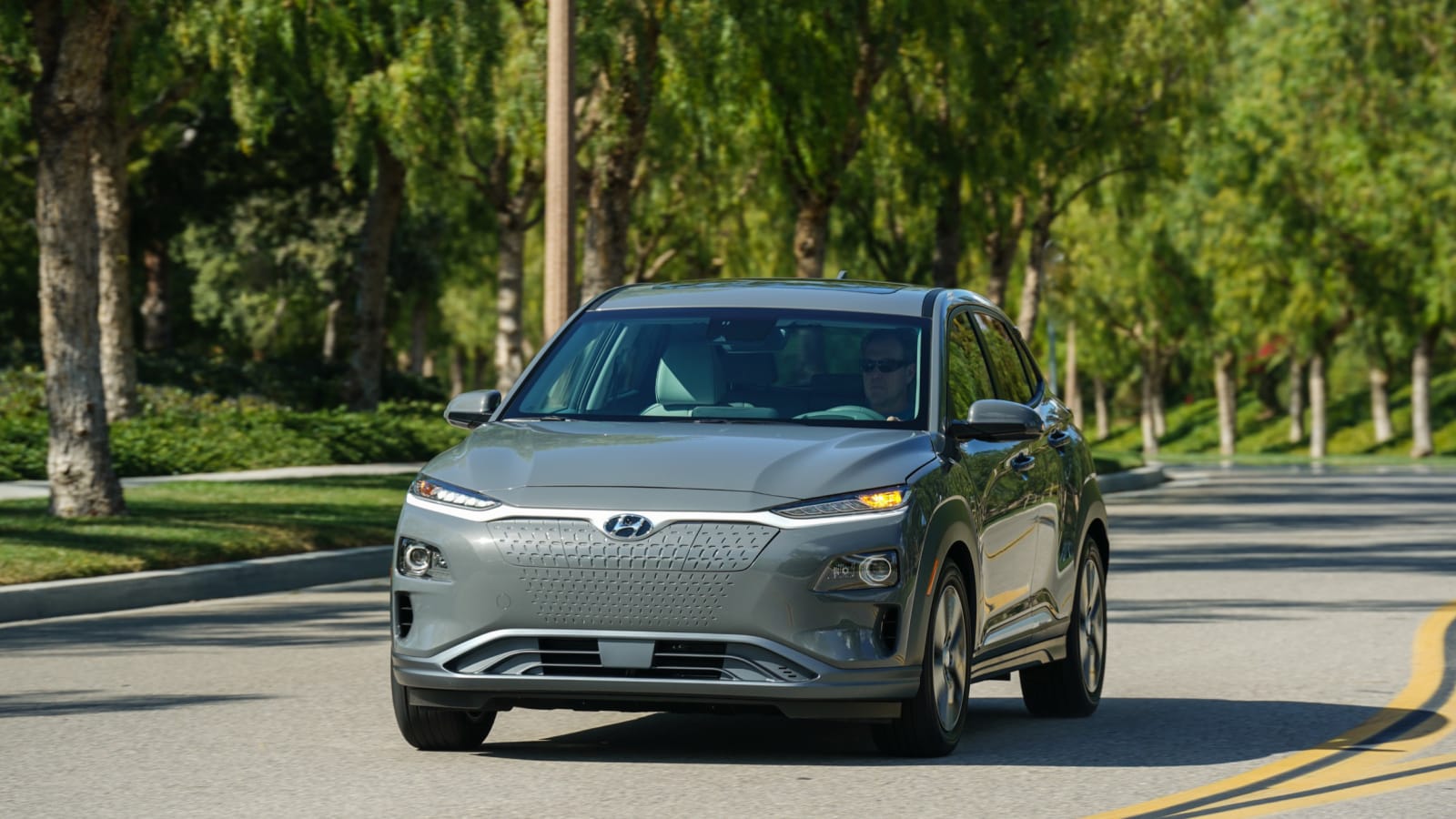 A more in-depth review of the Kona when equipped with the 1.6-liter turbo engine. The trim level discussed is no longer available (it’s effectively the Limited now) and the entire car has been updated, but our impressions remain broadly the same. 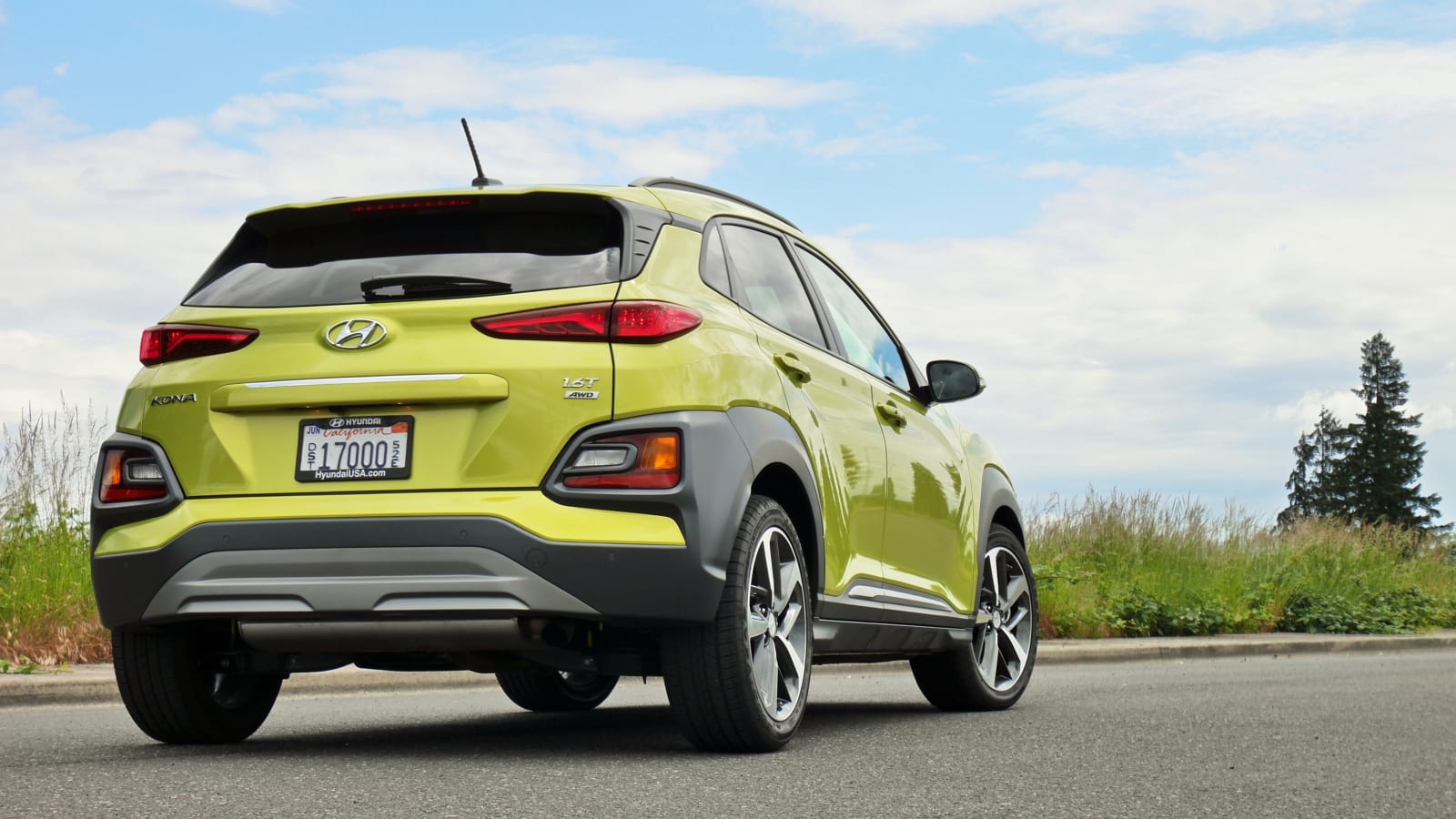 Our comprehensive full comparison test of subcompact crossovers. The Kona scored well but did not come out on top.

Pricing starts at $23,285 for the base SE with front-wheel drive. That includes the $1,295 destination charge as do all prices listed here. All-wheel drive is a $1,500 option on the core Kona trim levels. It’s not available on the N or Electric.

You can find a full rundown of added features for the other trims here on Autoblog (plus those for the Kona N and Kona Electric), but there are differences beyond increased comfort and convenience equipment to address for the N-Line and N. The N-Line is a sort of a “performance lite” version – it gets the 1.6-liter turbo, 18-inch wheels, a twin-tip exhausts and special sport seats. The N is the full monty version with virtually every key component upgraded – you can read more about it in our specific Kona N review.

The Electric trim levels are mostly even with the gas version, although the 10.25-inch touchscreen is standard. Keep in mind that the Kona Electric is no longer eligible for a federal tax credit due to the government’s new made-in-America requirement. The Kona Electric is built in South Korea.

What are the Kona safety ratings and driver assistance features?

NHTSA crash ratings are exceptional with a perfect five stars for overall, frontal and side protection. The Insurance Institute for Highway Safety gave the Kona the best-possible rating of “Good” in all crash tests, plus accident-avoidance tech ratings of “Superior” (vehicle-to-vehicle) and “Advanced” (vehicle-to-pedestrian).