The second-generation Volkswagen Amarok has been redesigned from the ground up in an engineering programme aimed at giving the popular pick-up truck greater accommodation and load-carrying ability than its 12-year-old predecessor.

Set for UK sale before the end of the year, it has been developed in partnership with Ford and as such shares its chassis, suspension and drivetrains – as well as key elements of its body, interior and electrical architecture – with the new Ford Ranger.

Both trucks are based on the T6 ladder-frame chassis a box-section steel structure conceived by Ford but modified with input from Volkswagen, according to Lars Krause, marketing boss of Volkswagen Commercial Vehicles (VWCV).

He said: “The new Amarok is a much better pick-up than if Volkswagen had done it alone. The same goes for Ford: without our input, the new Ranger wouldn’t be so good. The partnership has allowed us to pool our individual strengths. Beyond the business side of things, the product has benefited greatly.”

With more than 830,000 Amaroks sold to date, Krause revealed that VWCV is expecting big things from the truck, which was developed in Australia, Germany, the US and South Africa.

The new Amarok will be offered in single and double- cab bodystyles, together with five trim levels including upmarket Pan-Americana and Aventura, which are described as being off-road and on-road in character respectively. 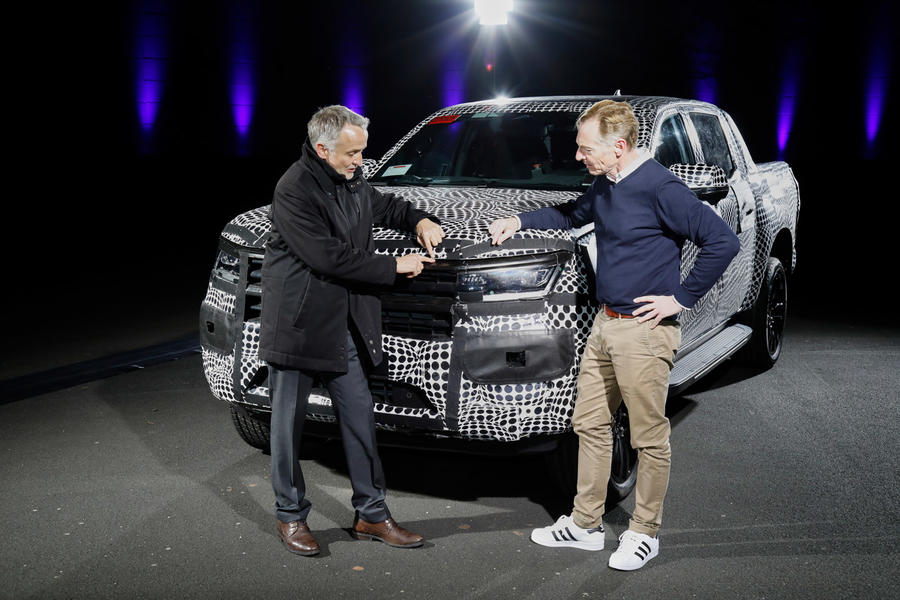 The Amarok gets its own uniquely styled bonnet, LED headlights (optionally with matrix properties), front wings and outer door skins. Elements shared with the Ranger include the roof, windscreen, side windows, rear window, wing mirrors and door handles, the latter sourced from the Ford F-150.

Along the sides, thereare more pronounced rear wheel arches than previously, while the new-look tailgate has ‘Amarok’ stamped into the metal. As well as growing 100mm between standard rear-wheel drive and two four-wheel drive systems, depending on the engine: one permanent and the other natively rear-driven.

The payload has increased to 1200kg, a towing capacity of up to 3500kg is now achieved across a wider range of models and the roof-loading capacity is up to 350kg. Its fording limit is also deeper now, in line with the Ranger’s.

Although the Ranger will be sold with a petrol-electric plug-in-hybrid drivetrain, this won’t be offered in the Amarok, owing to what one insider called “a less than satisfactory” electric-only range. Engineering studies are, however, under way to give the new pick-up a fully electric drivetrain, Autocar can reveal. 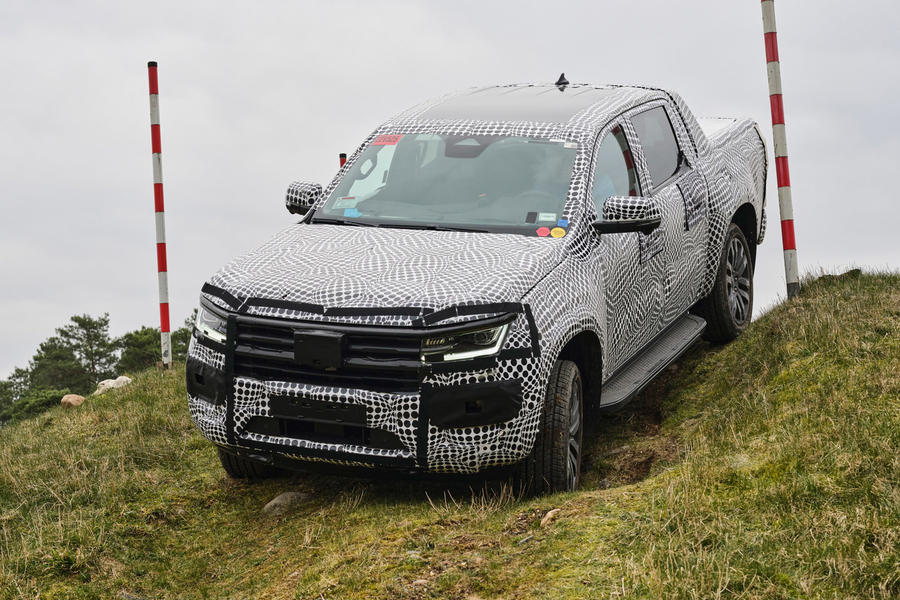 The interior is similar to that of the Ranger, but it receives typical Volkswagen touches as part of efforts to make it live up to the comfort and quality expectations of the old Amarok, including its own multi-function steering wheel, seats, switchgear and trims.

Ford’s Sync 4 system provides the basis for the touchscreen infotainment. Pricier models, including the Pan-Americana and Aventura, will be available with artificial leather upholstery for the dashboard, door panels and seats, the latter with optional 10-way adjustment.

Meanwhile, Ford is ramping up to reveal an electric version of its Tourneo Custom people carrier, the second of four commercial EVs that it will launch by 2024.

Arriving on 9 May, the E-Tourneo, as it’s believed to be called, is expected to be closely related to the E-Transit and therefore be fitted with a 68kWh battery for 196 miles of range and a rear-mounted motor making up to 265bhp and 317lb ft.