Nissan allowed us to spend a day with its new 2022 Frontier in the high canyons around Sundance, Utah, and I came away mightily impressed with what the brand has been able to do with the old platform. It’s been massaged, refined and redesigned, and has blossomed into a powerful, comfortable, capable and modern-feeling mid-size pickup truck that’s now gunning squarely for the Toyota Tacoma and its legions of loyal buyers. Nissan was so confident the truck is a winner, it provided a 2021 Tacoma TRD Off-Road for competitive drives during the Frontier launch in late July, so I took the opportunity to jump into it and drive it back-to-back with Nissan’s latest offering. From that drive, plus a week in a TRD Off-Road back in April, I was able to form some comparative impressions on how the two trucks stack up.

Styling: Fresh and Modern Vs. Tried and True

The last Frontier redesign was for the 2005 model year, so just about anything Nissan was going to do to the Frontier was likely to look fresh and modern. But the styling (handled by Nissan’s design center in California) really does look fantastic and disguises the fact that the Frontier is not an all-new, clean-sheet model but instead a heavy redesign. The interlocking shapes and squared-off, more chiseled look the Frontier sports help it blend into the rest of the Nissan showroom quite well; you can see versions of this front end on the latest Rogue and Pathfinder SUVs, as well. 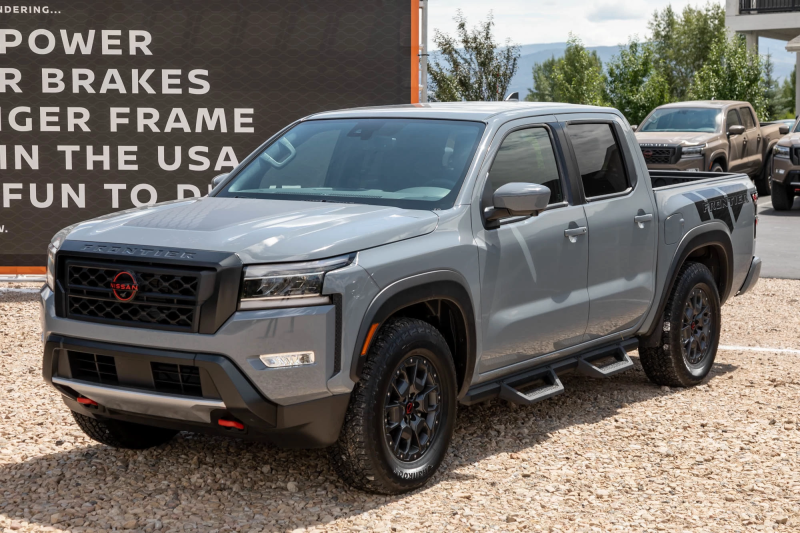 The Tacoma, on the other hand, can perhaps best be described as “familiar,” having received a very mild nose job for the 2020 model year. It looked better than the Frontier for many years, but now I think the Frontier presents a much more competitive appearance, making the Tacoma look not exactly outdated, but decidedly common. It’s still an attractive truck from the outside, with muscular styling that fits the image and class even if it doesn’t have the freshness of the new Frontier’s look. This disparity might not last much longer, however, as we’re expecting to see a new Tacoma sometime in the next two years, shortly after the arrival of the next Toyota Tundra full-size pickup later in 2021.

Powertrain: Frontier Runs Away — on Pavement

While the four-cylinder base engine has been discontinued for the Frontier (you can still get one in a Tacoma, however — and with a manual transmission option, too), the revised 3.8-liter V-6 that has replaced the 4.0-liter in the Frontier is now the engine to beat. It puts out 310 horsepower and 281 pounds-feet of torque, besting the Taco’s 3.5-liter V-6 and its 278 hp and 265 pounds-feet of torque. But the Frontier also puts that power down better than the Tacoma thanks to a new nine-speed automatic transmission; the Tacoma still only has six speeds. The  Frontier’s gearing makes for much more brisk acceleration, with an immediate response that’s lacking from a lot of mid-size truck powertrains (the zippy Ford Ranger being the major exception). The Tacoma’s V-6 feels ponderous and overtaxed by comparison; I found its acceleration requests met with more noise than motion. So, V-6 to V-6, the Frontier has the edge here.

But when comparing four-wheel-drive systems and off-road versions, the edge still goes to the Tacoma. The TRD Off-Road stacks up well against the Frontier Pro-4X, both models featuring part-time four-wheel drive with a dedicated low range for tackling the dirt. But the Tacoma features a host of electronic aids that the Frontier does not, such as crawl control off-road cruise control, hill start assist and the Multi-Terrain Select traction control system that allows drivers to select the terrain over which they’re about to drive. The Frontier has none of these electronic aids, only a 360-degree camera system (that the Tacoma also has). The Tacoma TRD-Pro is even more advanced, with internal bypass Fox shock absorbers, off-road-dedicated front and rear springs, and smaller 16-inch wheels with a 1-inch-wider track than the TRD Off-Road wrapped in Goodyear Wrangler All-Terrain Kevlar-reinforced tires. 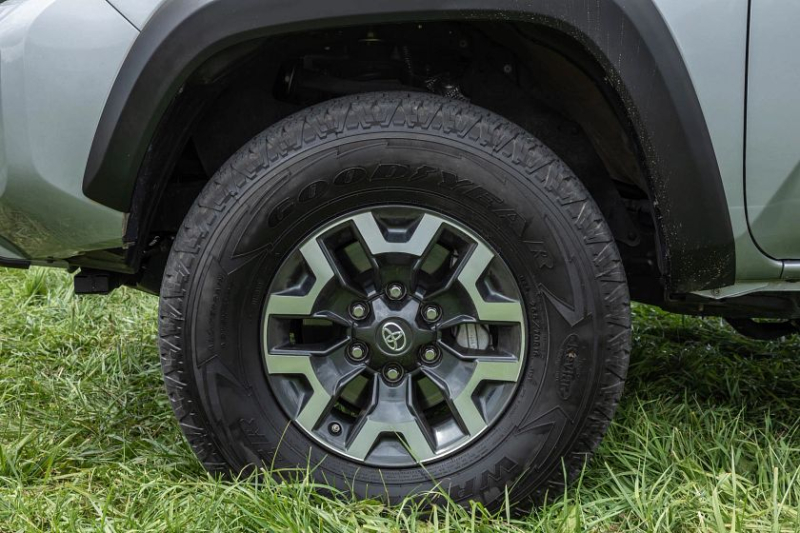 So, if you’re looking for a basic four-wheel-drive system that doesn’t come with a lot of bells and whistles, the Frontier will do just fine. If you’re looking for more technology, despite the Frontier’s redesign, there isn’t much there to be had even when compared with the long-in-the-tooth Tacoma. Nissan has some catching up to do off-road.

As noted in my review, perhaps the most astonishing aspect of the 2022 Frontier is how quietly it operates. Wind, road, engine and tire noise are amazingly muted thanks to all of the new sound insulation and vibration damping work that Nissan did throughout the body and frame. The environment inside is serene in ways the Tacoma is not — in ways no other mid-size pickup is, either. Combined with the solidity of the Frontier’s build quality, it’s something that needs to be experienced in order to be believed — and driving one back-to-back with a comparable Tacoma is an eye-opening experience. 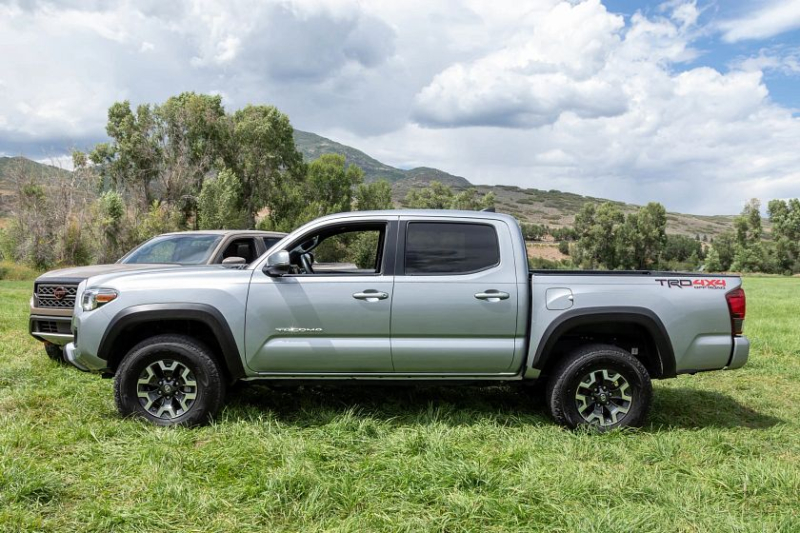 The Frontier simply drives better. The Tacoma suffers from some ridiculously touchy, grabby brakes, especially at lower speeds. It’s almost impossible to come to a slow stop without making all the occupants’ heads jerk. The Frontier’s steering is decidedly heavier and requires more effort than the Tacoma’s feather-light feel, but that actually adds to its sense of solidity and robustness. It has a quicker ratio than it did before, making it feel a bit more nimble than the Tacoma on twisty canyon roads. It combines well with the Frontier’s responsive transmission and progressive and well-done four-wheel disc brakes (the Tacoma still has rear drums).

Fresher Is Better Inside

While the Frontier might not have the powertrain options or off-road systems of the Tacoma, what it now has is an interior that ranks among the top in the segment. Gone is the cheap, plasticky, industrial-grade material that made up the instrument panel, doors and surfaces, replaced by high-quality plastic, very nice leather and a new design that is fully modern and attractive. 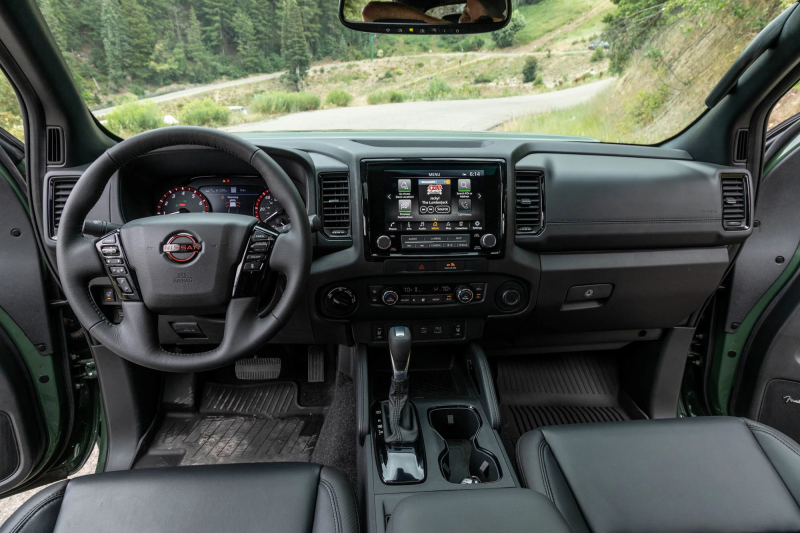 But the cabin space also beats the Tacoma (for front-seat occupants, anyway) with more headroom than the Tacoma — my head still touches the headliner when sitting in a Taco equipped with a moonroof, but it does not in a new Frontier. And despite the Tacoma’s lower roof, you still feel like you’re sitting on the floor, with a legs-stretched-out driving position that belies the Tacoma’s old-style Japanese truck construction. It has not been optimized for North American physiques, whereas it seems that the Frontier has, with one notable exception: You still can’t get a telescoping steering wheel in a Frontier, an almost inexcusable omission for a 2022 model-year vehicle.

Backseat room in both trucks is lacking, but such is the situation for most of the mid-size truck segment (excepting the Jeep Gladiator and Honda Ridgeline). Suffice it to say you’re not going to be any more comfortable in the back of a Tacoma than you are in the back of a Frontier, but you might have an easier time getting in and out of it, as the Frontier’s short wheelbase means small rear doors on the crew-cab model. 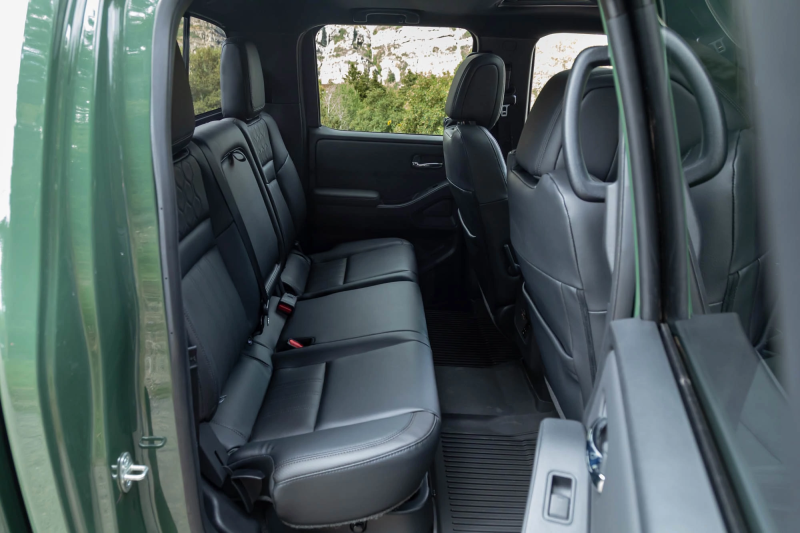 Overall, the Frontier interior is decidedly better than the Tacoma’s in nearly every way — materials, construction, design, comfort, space, storage, tech. Only the funky switch placement (several are by your left knee) and the egregious lack of telescoping steering adjustment can be faulted. The driving experience on-road is also better, with the Frontier feeling more powerful, quicker, more confident, more solid and decidedly quieter.

The only area that still needs testing is a towing and off-road comparison — the Tacoma has the more versatile 4×4 system with considerable electronic aids, while the Frontier goes off-road with a lot less. And while I was able to tow with the Frontier on my test drive, there was no towing for the Tacoma, so that will have to wait for a new comparison test. So unless you’re a frequent off-road driver, I’d give the Frontier the nod in this brief head-to-head. We’ll see if this remains this way once the Tacoma gets its expected redesign in the next couple of years.