2022 Nissan Frontier Interior and Bed Review | Excellent, given the context

The 2022 Nissan Frontier is an improvement in so many ways, and the interior is perhaps one of the most dramatic of changes. Of course, it was almost impossible for it to not be better than before, as the 2021 Frontier looked like it was straight outta the mid-2000s. Plus, the competitive set for it to clear in the midsize truck segment isn’t exactly a high one. Most midsizers, save the expensive Jeep Gladiator, have poor or barely average interiors in the grand scheme of today’s car market.

With that context in mind, let’s examine the Frontier’s new interior. Our main subject will be the SV trim, but we’ll make mention of the more luxurious (and more expensive) PRO-4X interior, too.

The SV is Nissan’s mid-grade, but loaded up with options as our tester was, it also serves as an upper trim for those uninterested in all the off-road goodies that come with the PRO-4X. Since it’s loaded, it has the Charcoal black leather upgrade seats — without the upgrade you’re making do with black cloth or tan/gray cloth. The tan and gray two-tone doesn’t look so bad, and might be a great choice for a truck, but Nissan locks you out of its best packages if you don’t get leather. Those packages include the $1,990 SV Convenience pack, SV Premium pack and Technology pack. You’re going to want all of those if you want niceties like adaptive cruise, auto high beams, the bed Utili-Track system, a moonroof and Fender audio system. 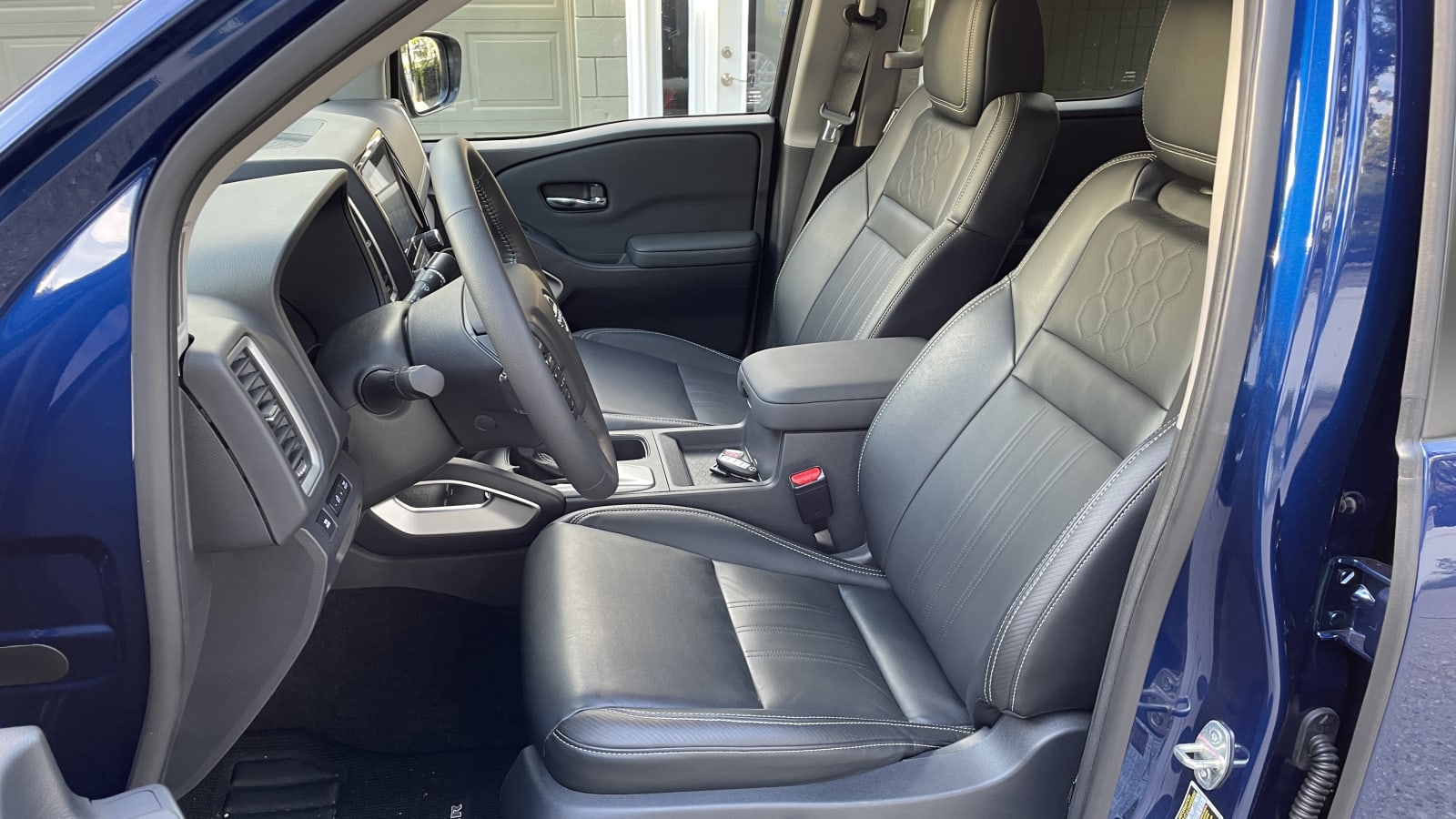 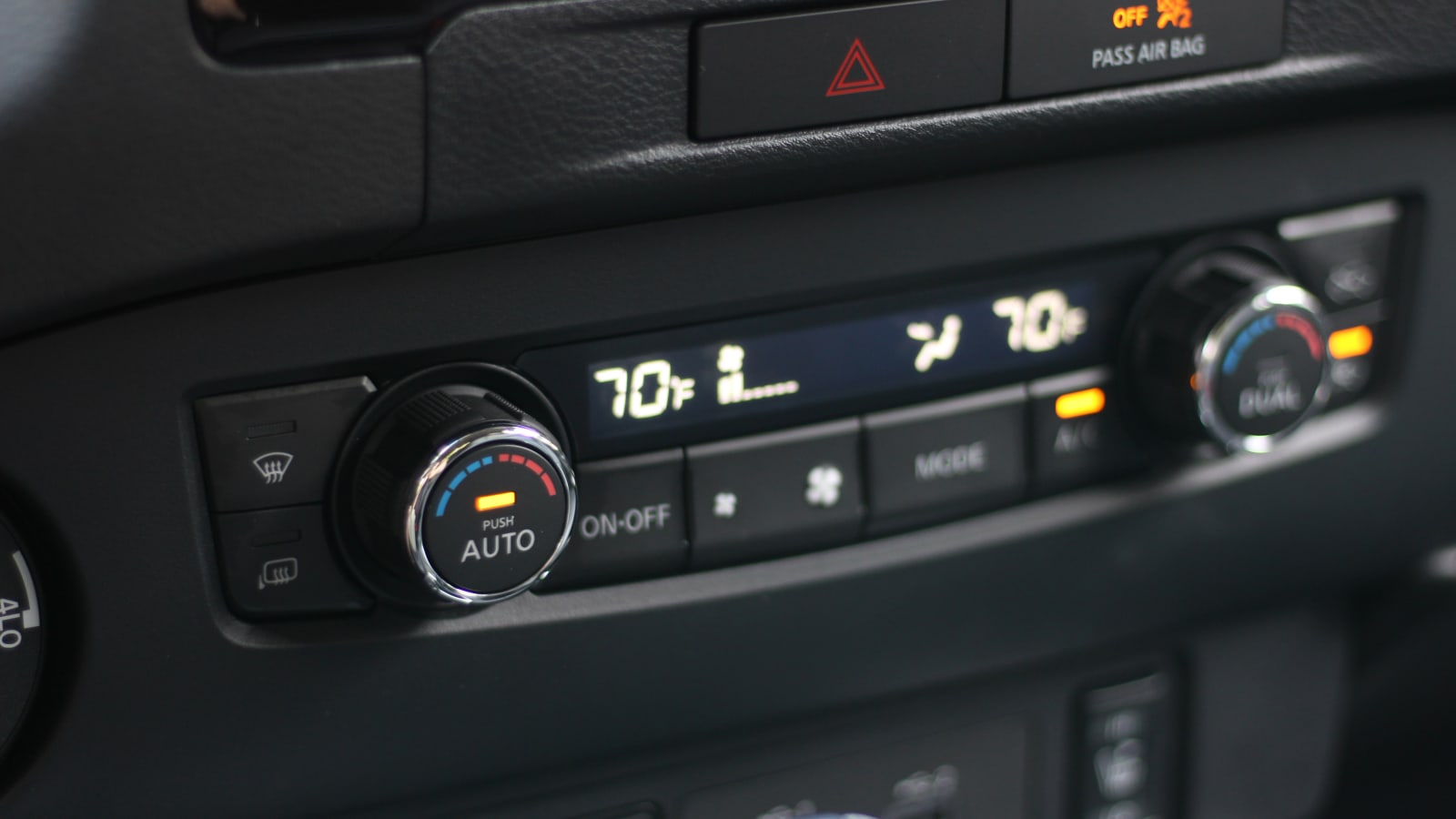 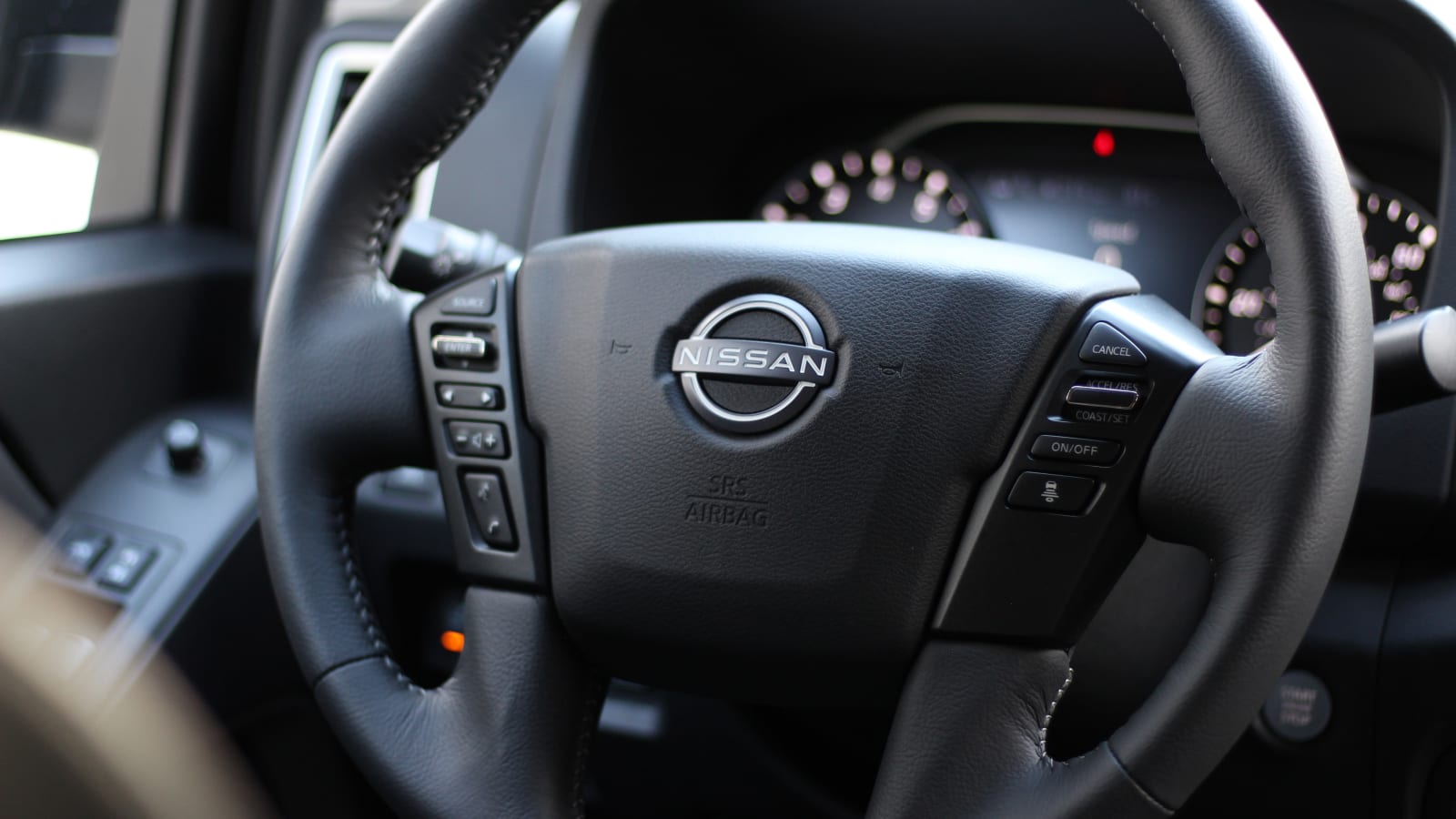 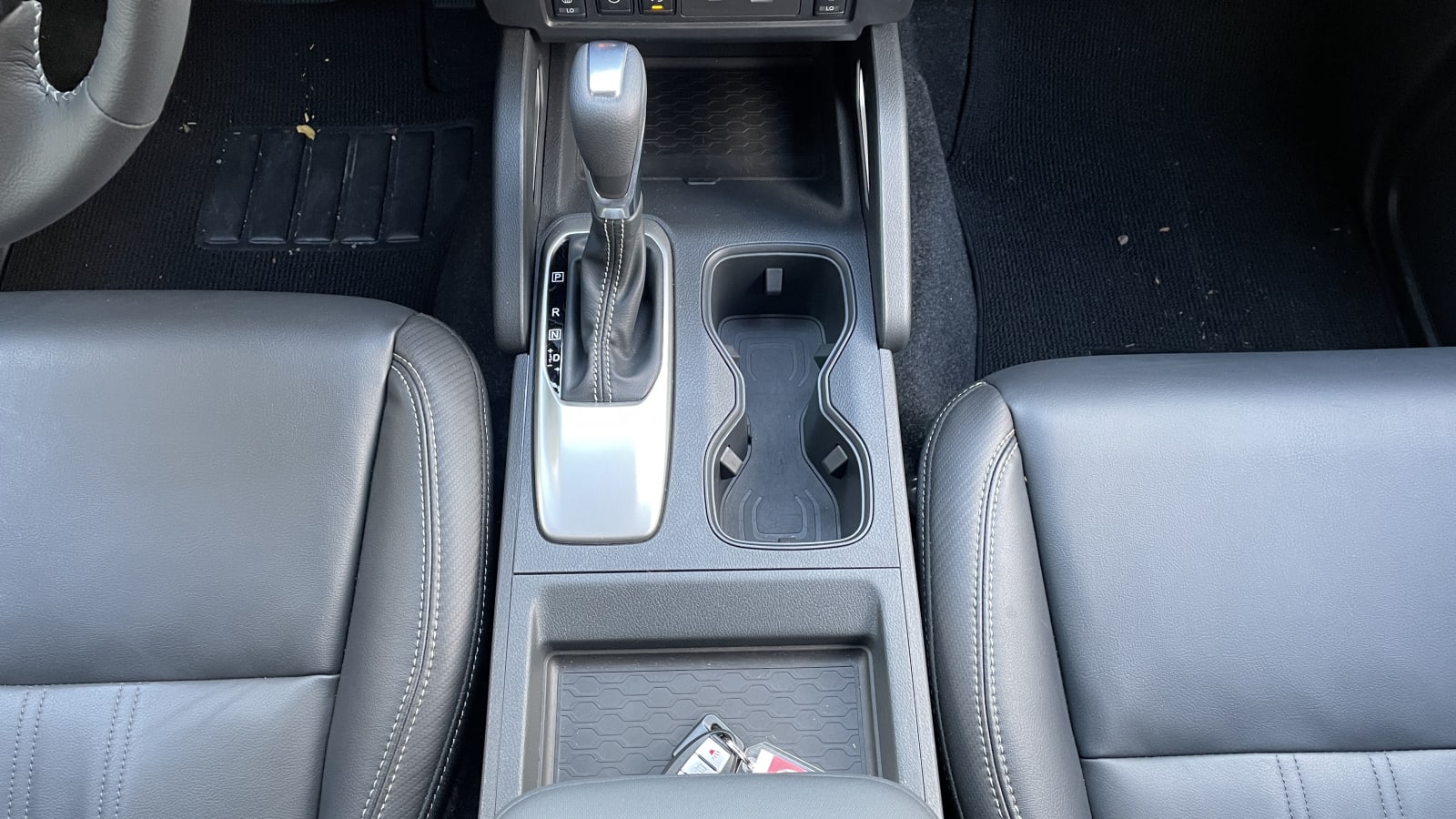 First impressions are good, but not great. The center stack is logically laid out and loaded with clicky buttons, knobs and switches in a very truck-like fashion. The only touch surface is the touchscreen itself, which is an 8-inch unit — a 9-inch touchscreen with shiny black surround comes into the picture on the PRO-4X. A long, traditional gear shifter sticks out of the floor and moves with enough hefty authority to be fit for a truck. The gauges are large and easily read, though Nissan’s center screen in between the gauges is already feeling dated and messy. We can say the same for the steering wheel. It’s Nissan’s last-gen wheel, which means the buttons on it are annoyingly far reaches for our fingers, and the wheel itself isn’t particularly attractive.

On the plus side, we have few bad things to say about the Frontier’s ergonomics elsewhere. Visibility is excellent even over top of the tall, long hood, and it’s easy to place the Frontier on the road. This truck may be larger than before, but it still drives small relative to other mid size pickups. The seats themselves are super comfortable and feature Nissan’s Zero Gravity seat technology. Plus, there’s plenty of interior storage to tuck personal belongings or phones — this might just be the best midsize pickup for a road trip. 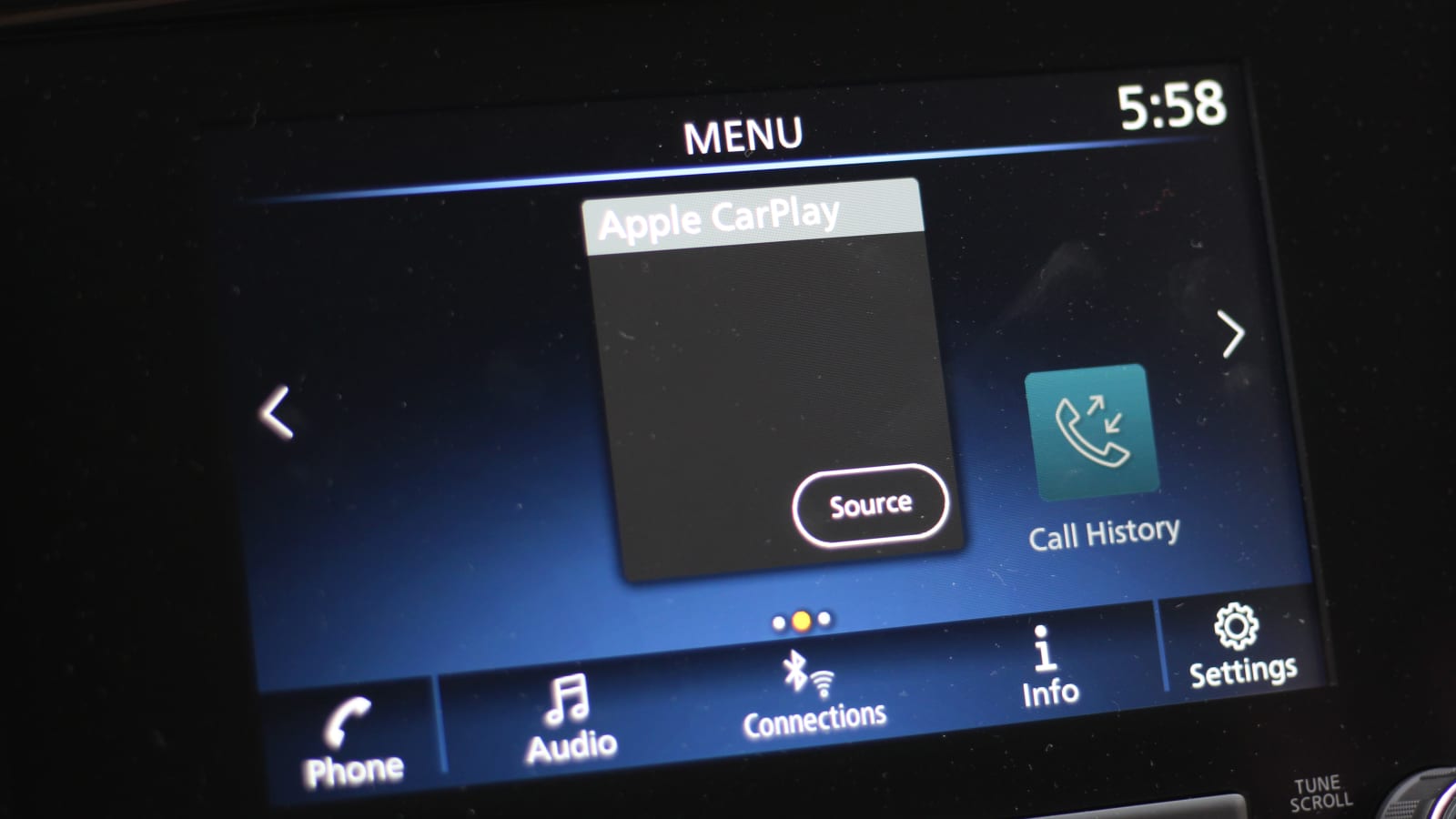 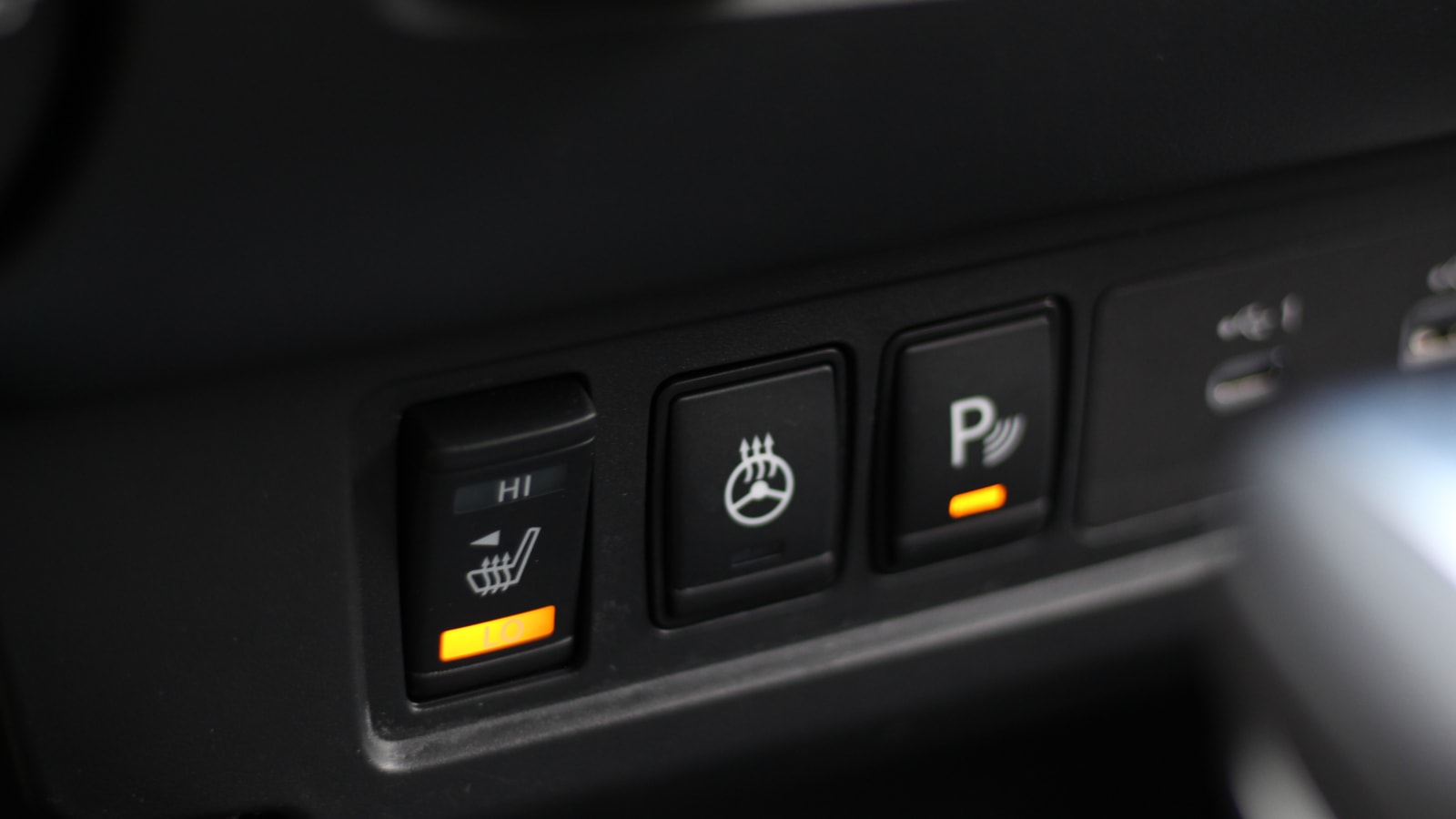 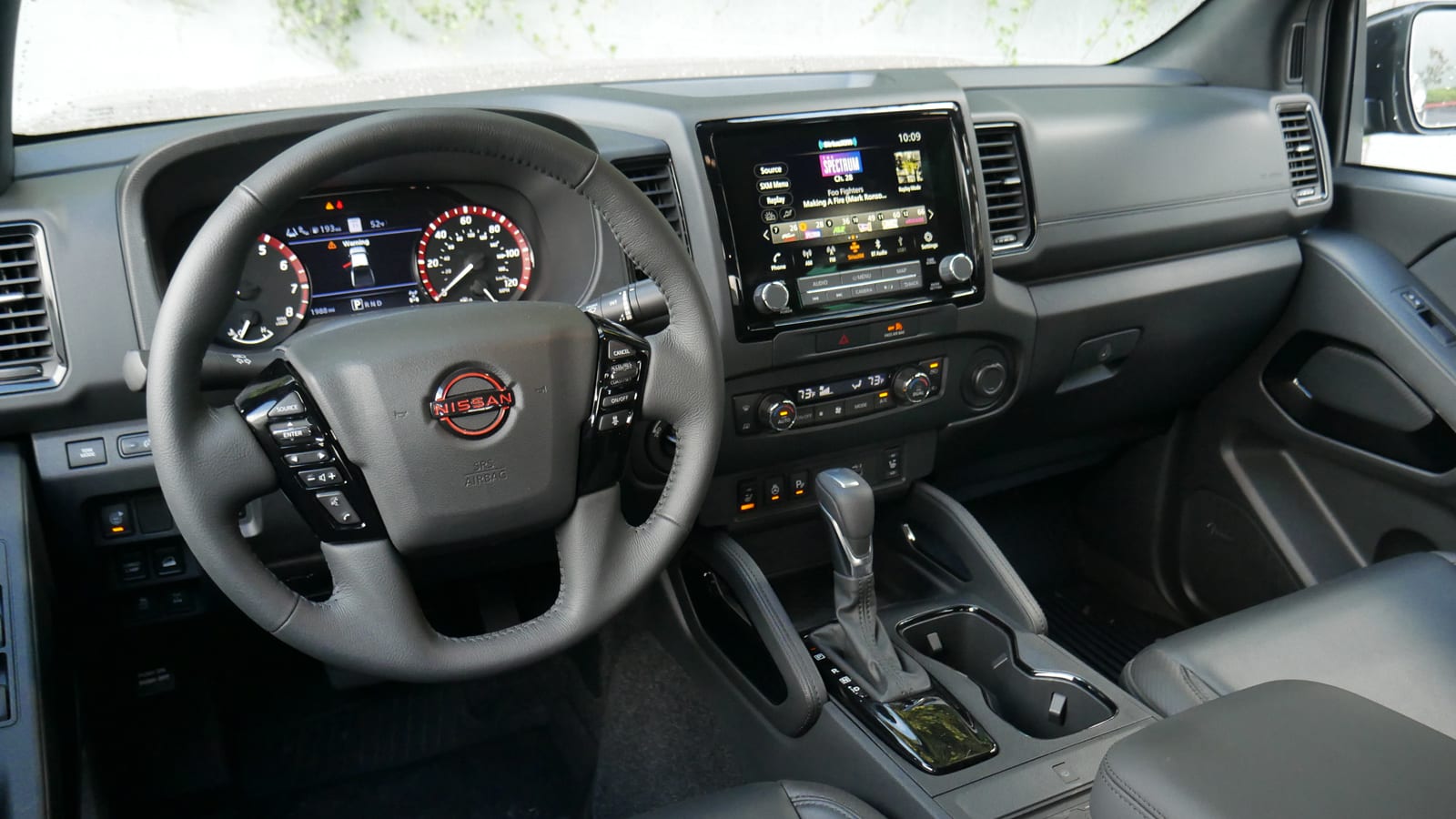 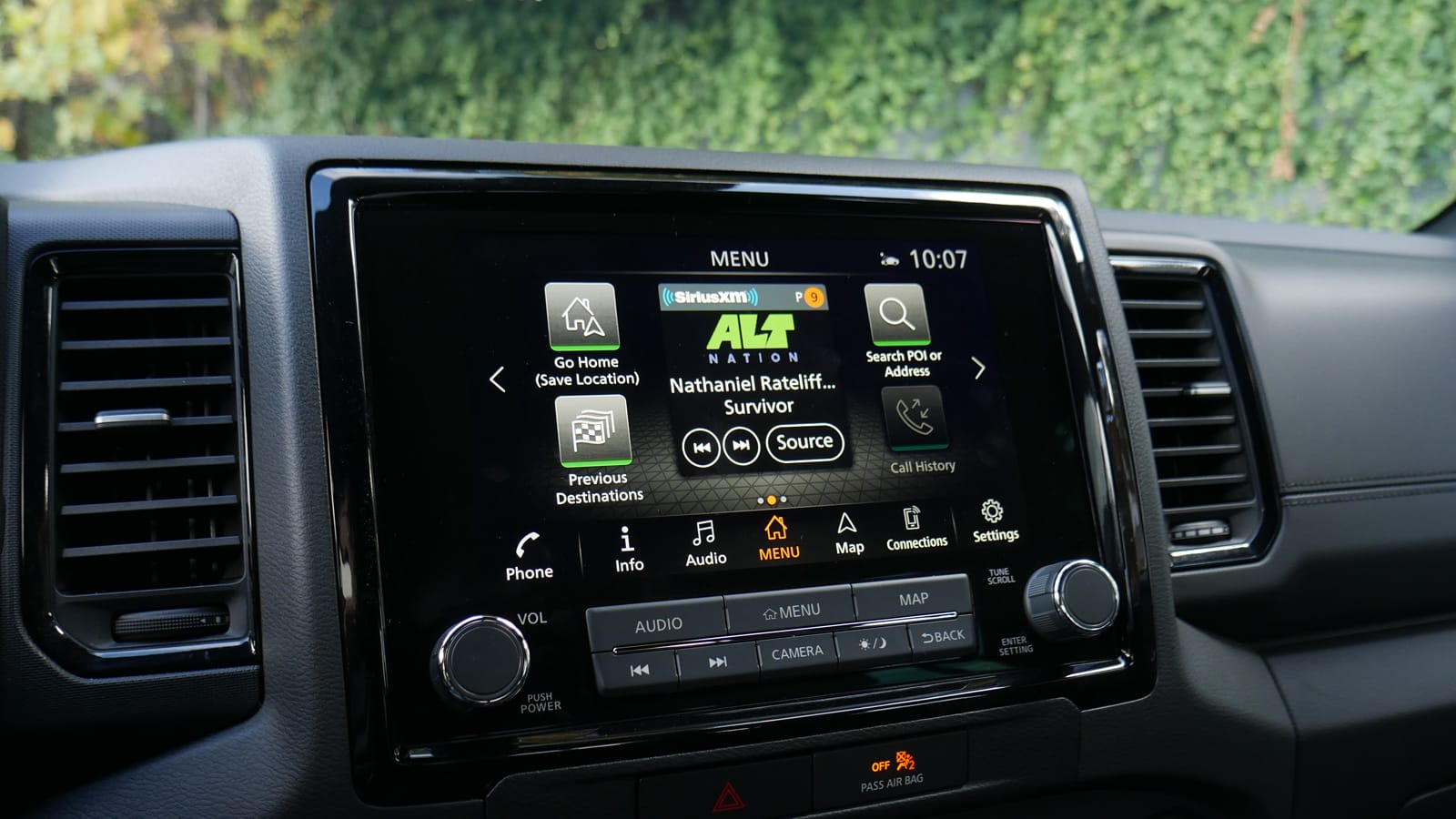 If you want tech, Nissan offers about as much as we’d expect in this class. You can get dual-zone climate control, heated seats, heated steering wheel, USB-A and USB-C ports, a wireless phone charger, a suite of driver assistance features, remote start and the aforementioned Fender audio system if you so desire. And if you want a truck with a touch of interior design flare, the PRO-4X can provide exactly that. Vibrant red accents abound in the PRO-4X and bring life to an otherwise staid and colorless interior. We’re especially big fans of the red Nissan logo and red stitching on some models. 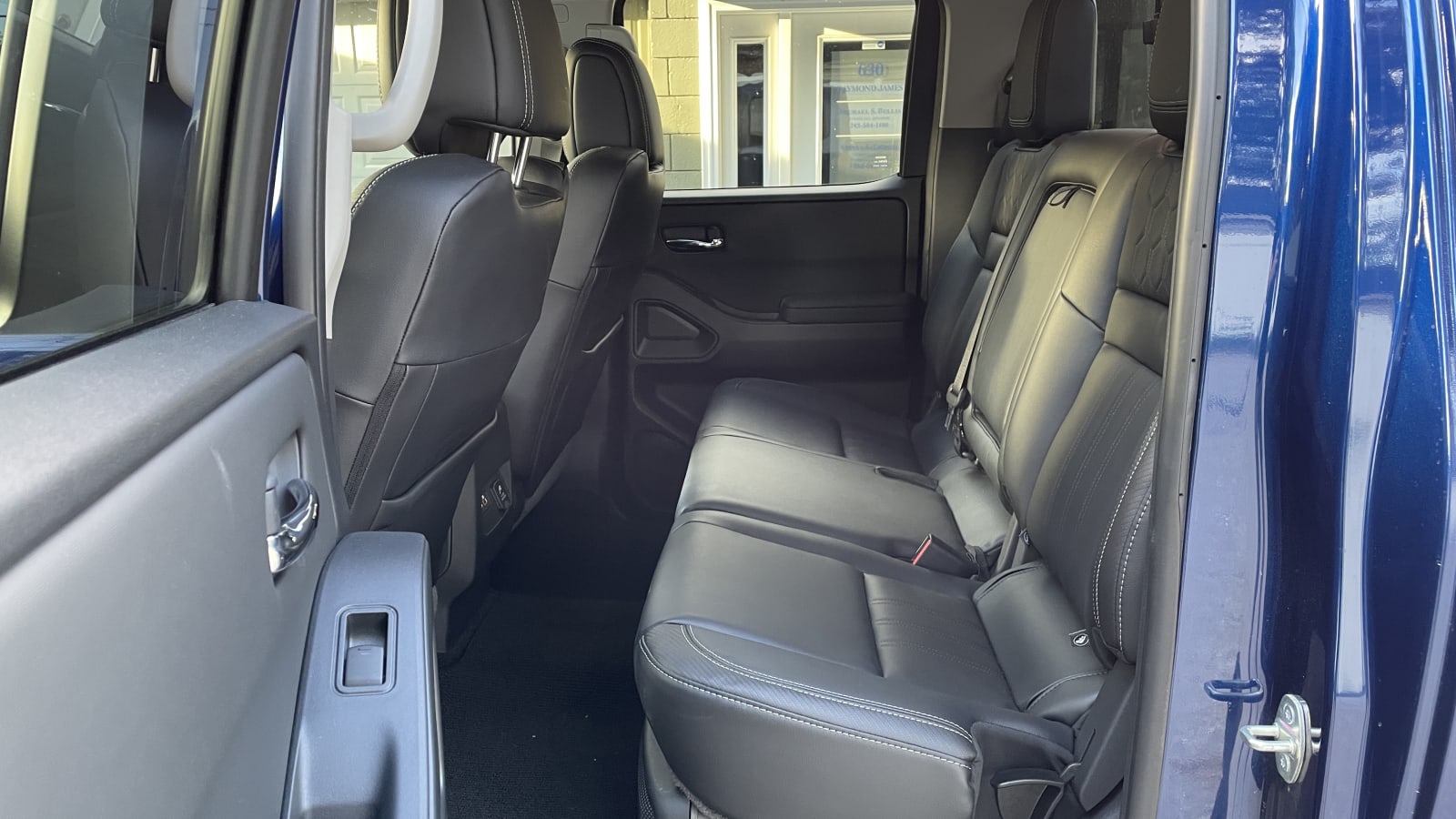 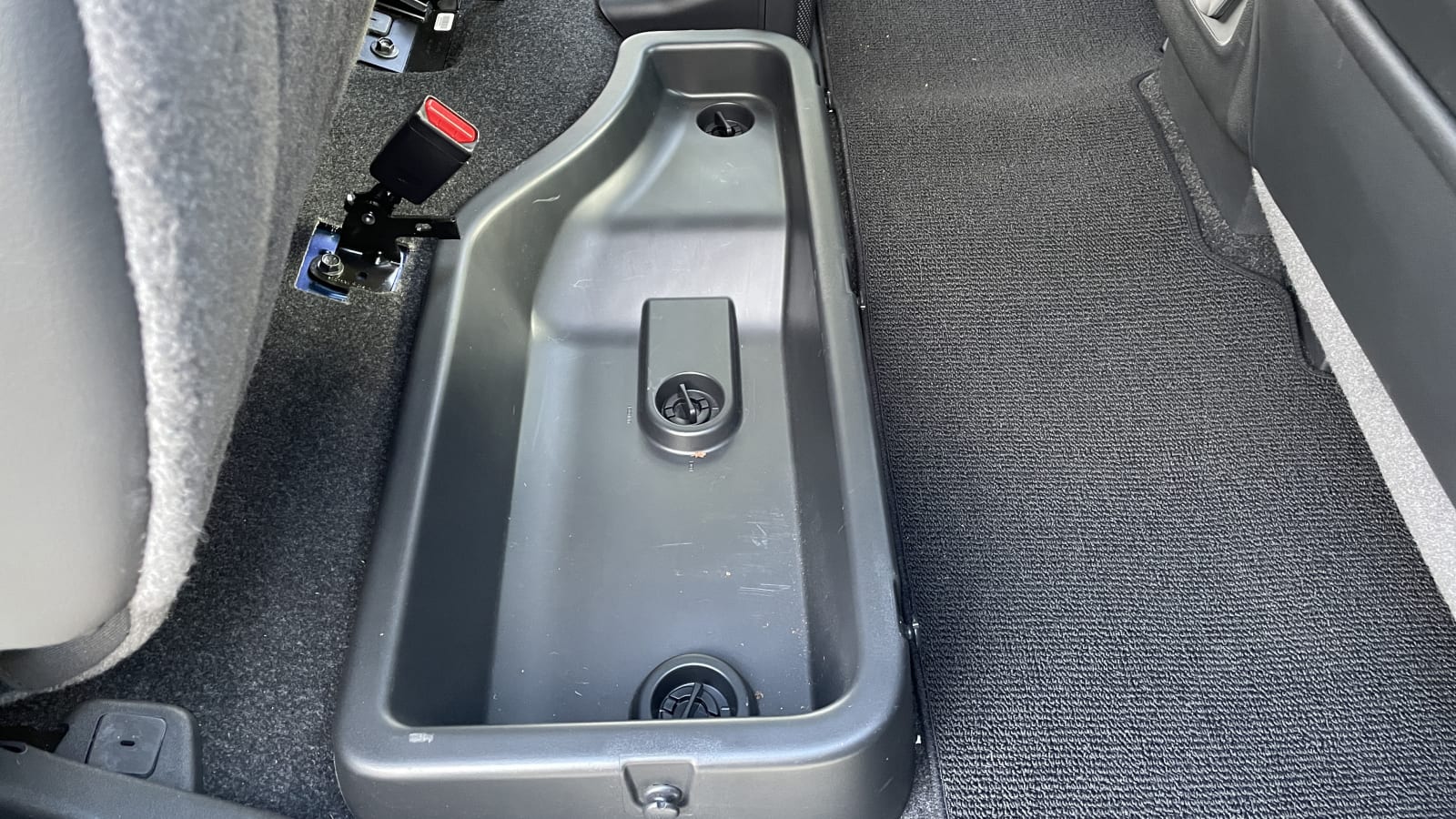 The backseat of the Crew Cab is notably tight with very little recline, but that’s what you should expect with a small midsize pickup. At least the under-seat storage is helpful and can easily contain a number of items should you need that area for extra storage. Other midsizers like the Ridgeline or Ranger offer more space, but if you really want to give those backseat passengers some luxury, the world of full-size pickups awaits.

We sat in a King Cab at the Frontier’s initial launch, and it’s not something we’d wish upon our worst enemies. The backseat is essentially there as an afterthought. Just consider it a Porsche 911 in that respect. The seats exist, but they’re not really meant to be used by anybody larger than a small child. 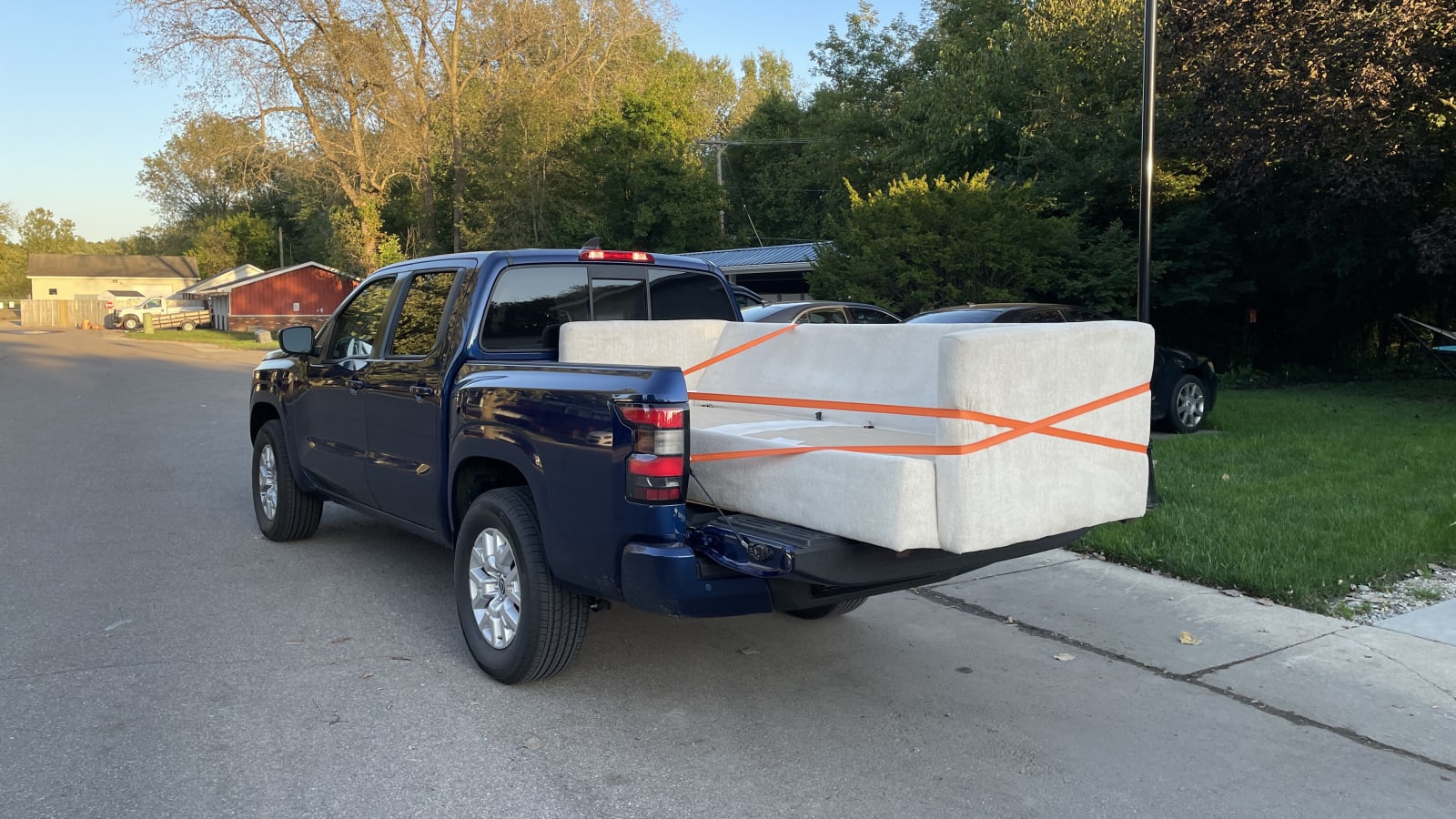 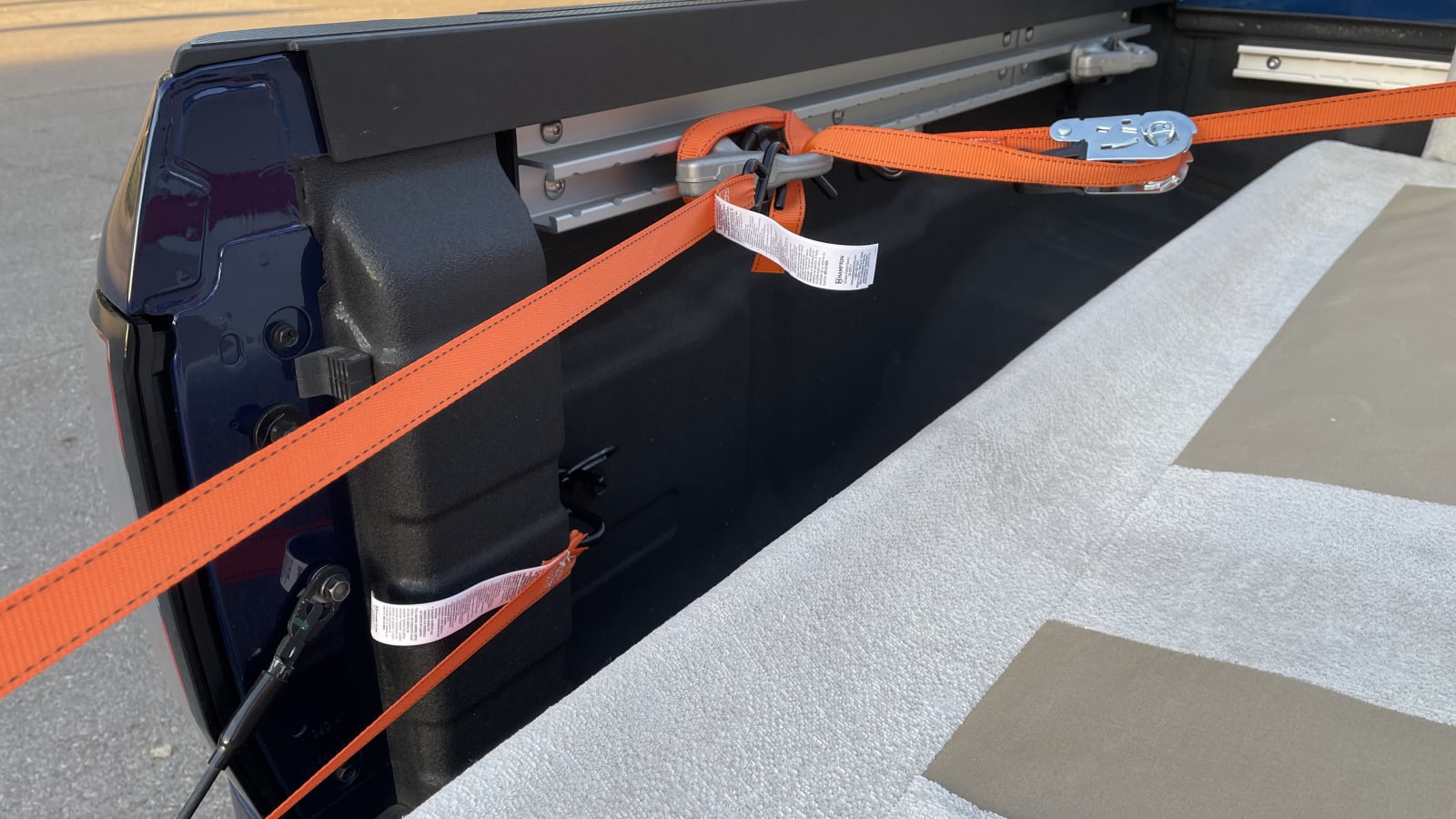 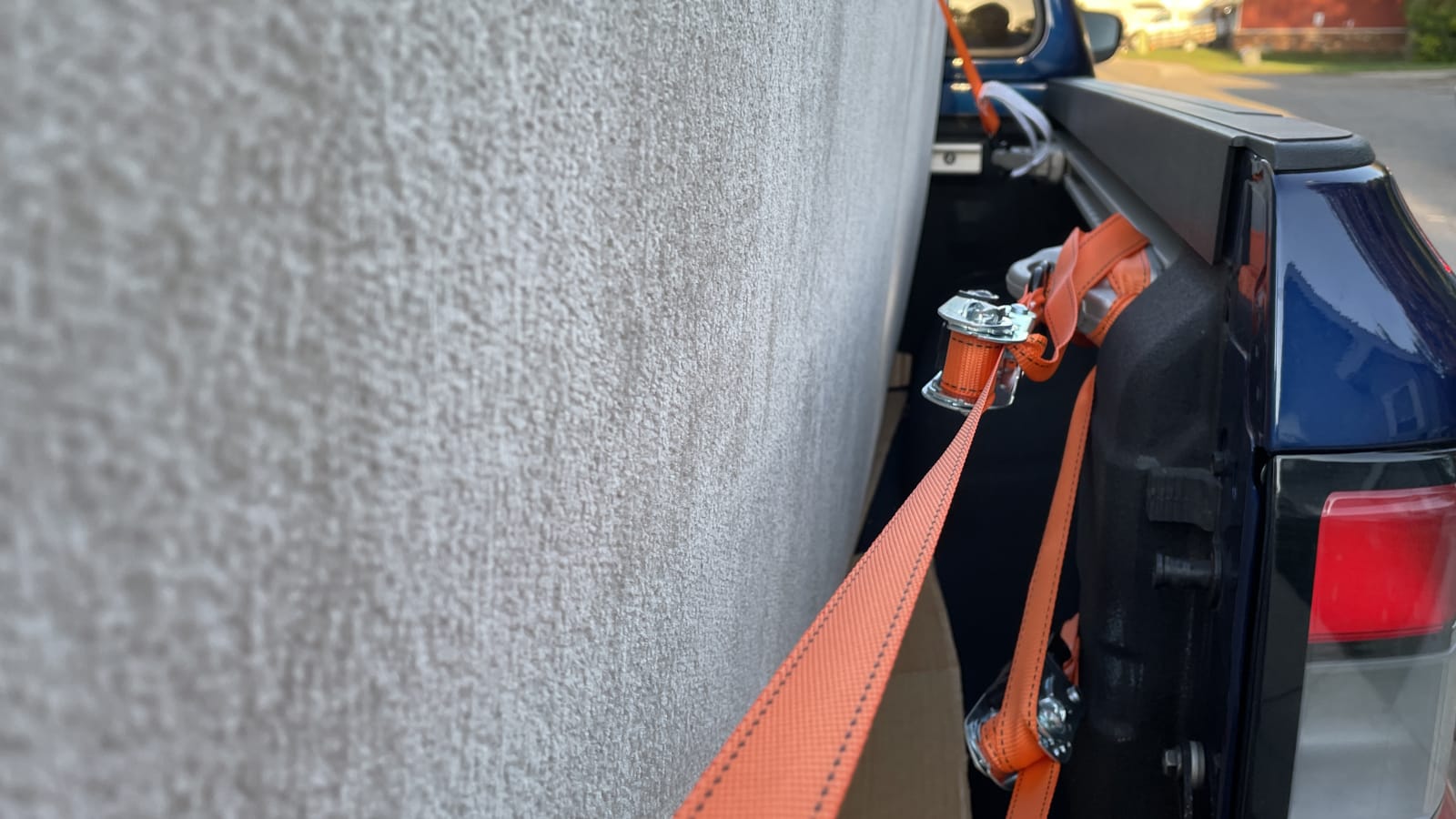 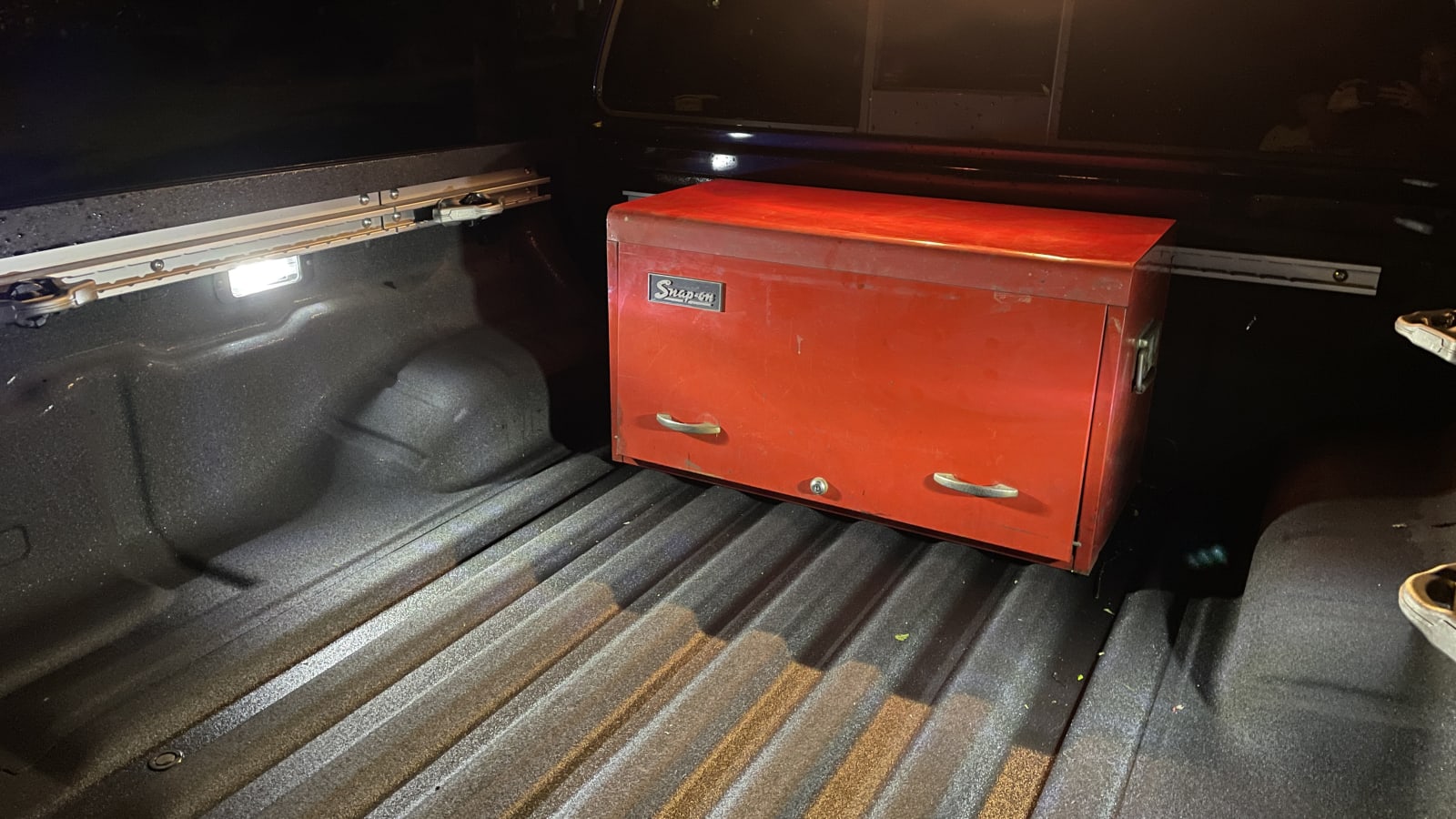 Going even further behind the rear seats, we get to the bed. Our big bed test consisted of moving a couch that was considerably longer than the Frontier Crew Cab’s short 59.5-inch (about five feet) bed. Even with the tailgate laid flat, the giant couch that needed moving hung out the back another foot or so.

No matter, we gathered up our tie downs and secured the couch such that it wasn’t going to budge. Nissan’s Utili-Track system came in real handy for this task, because all of your theoretical tie down points can be moved to whatever position in the bed works best for the load. A simple twist of the knob allows you to slide the clip anywhere along the track, and the knob tightens back up just as easily, ensuring the load is secured in the safest possible manner. Using this system made moving the giant couch stress-free and super easy, and it also goes to show how convenient any kind of truck can be in life no matter the bed size. Lastly, if you need to move anything at night, the LED bed lights make visibility a total non-issue.

From where the previous generation Frontier’s interior was to now, Nissan has stepped its game up by what seems to be an indescribable margin. It’s gone so far as to put together an interior that is arguably nicer to look at and use than most other midsize trucks, too. Again, that’s a low bar to pass, but Nissan has done so anyway. We applaud this interior, so long as it’s not going to be the same one we look at for the next decade and a half.