2022 Ford Maverick: Will It Pickup Truck? The 2022 Ford Maverick is heading to dealerships, and if you thought the Honda Ridgeline was a PINO (pickup in name only), it’s doubtless you’ll have opinions about whether the new Maverick is trucky enough. That’s the new Blue Oval baby trucklet based on the front-wheel-drive Ford C2 platform (which also underpins the Escape, Bronco Sport and European-market Focus hatchback), powered by a gas-electric hybrid or turbocharged four-cylinder engine, and sized one tick smaller than Ford’s own mid-size Ranger.

But hear me out: I’ve driven the new Maverick ​​— and not just some loaded version by myself on a flat stretch of highway, but all trims of the new truck, laden and unladen, towing trailers approaching its max towing capacity, up and down some decent grades and at highway speeds. And unlike its main competitor, the new 2022 Hyundai Santa Cruz, whose automaker has gone to great efforts to try and convince us that it is not a pickup, I can unequivocally state that the Maverick definitely is. Ford’s new baby will most definitely pickup truck ​​— if you want it to.

Yes, the bones of the new Maverick are more crossover than traditional truck. It’s a unibody vehicle like a Ridgeline, not a traditional body-on-frame truck. The bed is integrated into the body structure and isn’t removable, so there won’t be any camper conversions or delivery van Mavericks rolling around your town — or not without an upfitter taking a reciprocating saw to the truck. And yes, it’s front-wheel drive with optional all-wheel drive. But neither of these attributes matter on the Maverick, as Ford has applied its pickup truck duty cycle durability testing to the Maverick instead of the less stringent SUV testing regimen. So the tests that make the Ranger and F-Series so tough have been applied to the Maverick, as well. That should give you a little idea of how well the Maverick works as a pickup.

The standard engine is a 2.5-liter four-cylinder gas-electric hybrid making 191 horsepower and 155 pounds-feet of torque, driving only the front wheels through a continuously variable automatic transmission. The optional engine is a turbocharged 2.0-liter EcoBoost four-cylinder making a more robust 250 hp and 277 pounds-feet of torque, sending power to either the front or all four wheels via a traditional eight-speed automatic. With the hybrid, you get a 2,000-pound max towing capacity, but opt for the 4K Tow Package only available with the EcoBoost engine and AWD and that rating is upped to 4,000 pounds. That max tow package brings with it a larger radiator, a transmission oil cooler, a seven-pin wiring harness, a different final drive ratio and an integrated electronic trailer brake controller.

That last one is a big deal, and indicates how serious Ford is about the Maverick being a proper pickup — you can’t even get a factory-installed integrated trailer brake controller on the Jeep Gladiator, Ridgeline, Toyota Tacoma or Santa Cruz. 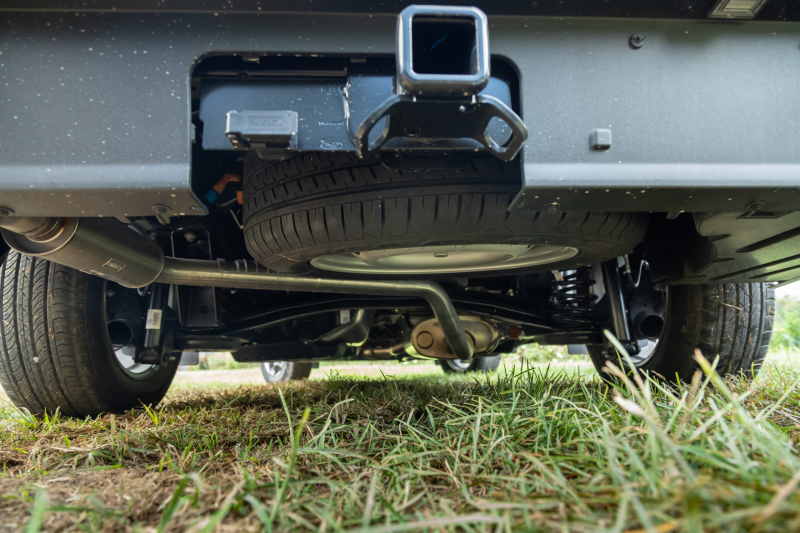 I dragged a variety of things behind several different Mavericks during the recent media introduction drive of the truck in Nashville, Tenn. I started out in the hybrid hitched up to a trailer carrying two personal watercraft, as if it was heading for a day out on the lake. Despite what on paper is an unimpressive torque rating for a pickup (155 pounds-feet, remember), the Maverick hybrid had no problem dragging the PWCs up and down twisty hills. Braking feel and stopping distance didn’t seem affected in the slightest, a testament to the robustness of the Maverick’s brakes. I then sampled two EcoBoost turbo models, one towing a 2,600-pound Airstream Basecamp 16-foot travel trailer and one towing two all-terrain vehicles on a flatbed trailer. Once again, the loads they towed weren’t challenging in the slightest. I suspect that the Maverick can tow significantly more than what it’s rated to before it starts to affect the truck. Ford might be underrating the capacity due to some weak link in the drivetrain or chassis, but I certainly didn’t think it had any issue towing whatsoever.

Goes Off-Road, But Not Too Far

Many people insist that a proper pickup truck should have all-terrain capability despite many rarely ever venturing onto a dirt road. But this isn’t to say that there aren’t users who need that kind of capability, and the Maverick has something for them, as well. All Ford pickups have an available FX4 Off-Road Package that brings some extra off-road ability. In the Maverick, which is based on the surprisingly capable Bronco Sport, it brings similar underbody skidplate protection, the same optional Falken Wildpeak off-road tires on 17-inch wheels, modified suspension tuning and some new off-road (Sand, Mud and Ruts) modes for the drive selector, plus hill descent control, front tow hooks and a heavier-duty engine cooling fan and radiator. 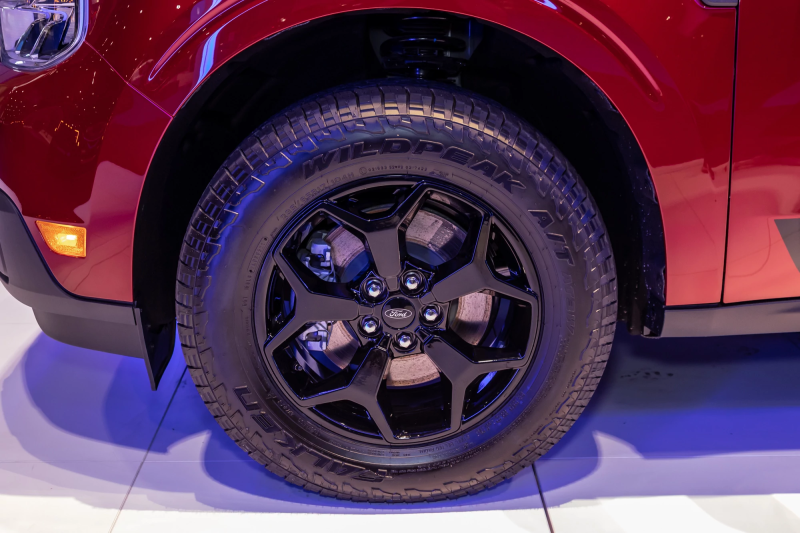 Ford is quick to point out that the Maverick is not aimed at off-roaders and is more suitable for getting you to your campsite than venturing past it into the wilderness, much like SUVs akin to the Subaru Outback. As such, Ford didn’t provide much of an off-road challenge, merely some two-track driving and a loose, rocky hill climb, both of which the Maverick handled with ease — but one that even a FWD Maverick or any crossover would have likely been able to handle.

So, if you’re planning on rock crawling or sand dune racing, you’ll likely want to spend a little more on the Ranger or Bronco; if you’re good with just bringing some stuff to the mountain state park’s remote campsite, the Mav will work.

Meant for Work and Play

In my opinion, by far the biggest requirement for any pickup truck is that it must be able to do dual duty of work and play. The Maverick works for this scenario thanks to a lot of clever features that Ford has baked into the truck. The bed — the work end of the truck — has several interesting features: You can spec a 120-volt, 400-watt power outlet to power tailgating toys, but there’s something interesting back there that you won’t find even on larger pickups: two 12-volt, 20-amp fused circuits. These circuits are behind removable plastic panels with automotive-style connectors ready for whatever you want to plug in and run off the ignition switch. Want to add some aftermarket bed lighting from Amazon? No need to run a circuit to the engine bay or drill through the firewall, just plug ‘em right in. I’m betting we see a proliferation of accessories pop up meant to be run off these connections. 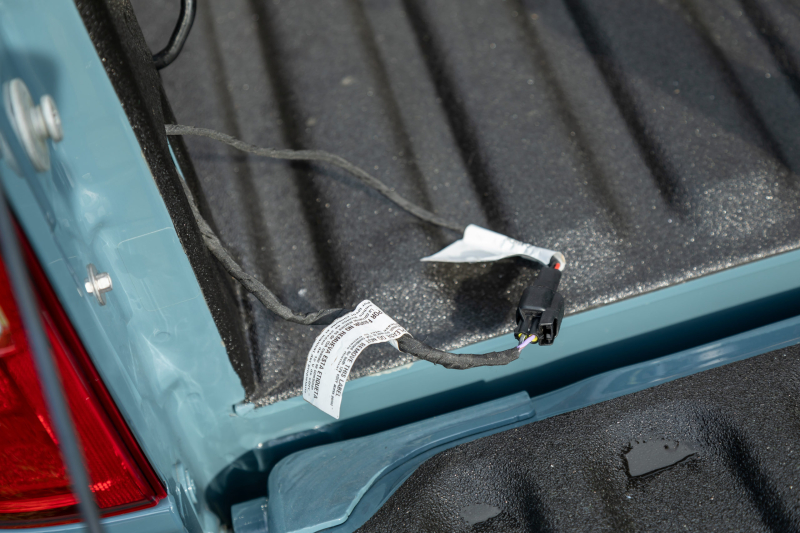 The bed can also accommodate up to 1,500 pounds of payload capacity regardless of powertrain or trim level, a pretty significant sum for any pickup. And having driven both powertrains loaded to their capacity, I can state that either of them works perfectly fine for hauling duty, even the hybrid. The tailgate is a two-position affair that can be partially opened by changing the position of the cable stays, allowing you to drop the proverbial 4-by-8 sheet of plywood in it, as it makes the top of the tailgate level with the tops of the bed’s wheel housings. The tailgate itself can take a 500-pound load, almost as much as a big F-150. It’s even exceptionally easy to get into the bed thanks to the Maverick’s low height — there’s no bed step, just plant a foot on the tailgate and step up on in. 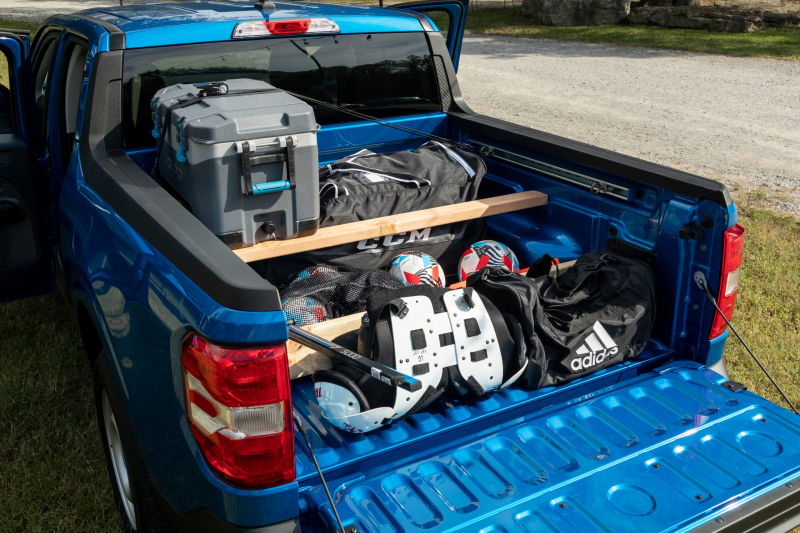 There’s plenty of play in the Maverick, too, thanks to its connectivity features (Apple CarPlay and Android Auto are standard, but you’ll need a cable for them), optional all-weather floormats and a catalog of more than 150 accessories that’s available from Ford alone right as Mavericks hit the showroom.

Versatility and Value Wins the Day

I think it’s the Maverick’s combination of versatility and exceptional value that will be what wins it a spot in driveways as a beloved pickup. Need a cheap work truck? The base XL with its steel wheels and no-nonsense interior, super-efficient drivetrain and ability to accept a bed cap and still lug 1,500 pounds of stuff around for just a tick over $21,000 (including destination) would be ideal. Want a toy hauler that still fits in the garage? Arm the XL with the EcoBoost engine, AWD and the 4K Tow Package and you’re still under $26,000. That you can get this combination of high-spec engine and powertrain in the base trim level deserves serious praise. Really, the only reason to start climbing the trim ladder is to add a couple of niceties (if you want cruise control, you have to spec the XLT; if you want push-button start instead of a twist key or a leather interior instead of the frankly better-looking cloth, you’ll need the Lariat).

The new Ford Maverick is going to be a lot of things: a first car for young drivers, an empty-nest-mobile for retired couples with budget campers, an efficient fleet vehicle, and I suspect the turbo models are even going to find fans in sport truck buyers (tune that turbo, make some serious boost and watch it fly). But one thing it most certainly is: a pickup truck.

More from PickupTrucks.com and Cars.com: