The 2022 BMW 4 Series Gran Coupe is the latest of the 4 Series family to land with the all-electric i4 hot on its heels, both following in the footsteps of the regular two-door Coupe and the new soft top Convertible. Just as in years past, it’s the four-door version of the two-door 4 Series Coupe, and it’s rocking a hatchback, not a trunk.

If it weren’t for that hatchback, there would be very little practical reason for this Gran Coupe variant to exist. After all, the 3 Series is out there, and it’s available in the same performance trims as the 4 Series Gran Coupe is. That said, reducing the new Gran Coupe to just its cargo area isn’t doing it complete justice.

Just like the other 4 Series models, the Gran Coupe gets The Grille. Fans of the snout who want four doors can line up right here, because outside of the M3, there’s no other way to get ultra-tall kidneys with four doors. Frankly, the Gran Coupe is the most acceptable looking of all the 4 Series variants, as the grille is better proportioned to the taller body (besides being loftier than the two-doors, it’s also 2.1 inches taller than the old Gran Coupe). It still stands out, but to a lesser extent. Additionally, you’ll get other 4 Series distinguishing features like the slick, wide taillights, frameless windows and more prominent fenders. Eagle-eyed observers will also notice the 4 Series Gran Coupe adopts the new 2 Series’ flush-fitting door handles — other 4 Series models continue to make do with BMW’s traditional door handle design.

Beyond aesthetics, the 4 Series Gran Coupe is also rocking the same chassis and handling improvements as the other 4 Series models enjoy over the mechanically related 3 Series. It has a wider rear track, additional chassis bracing, and unique suspension and steering tuning. The Gran Coupe’s greater height versus the two-door means it doesn’t also share in the Coupe’s lower center of gravity, but no matter, as it’s still setup to be the more engaging driver versus the 3 Series. 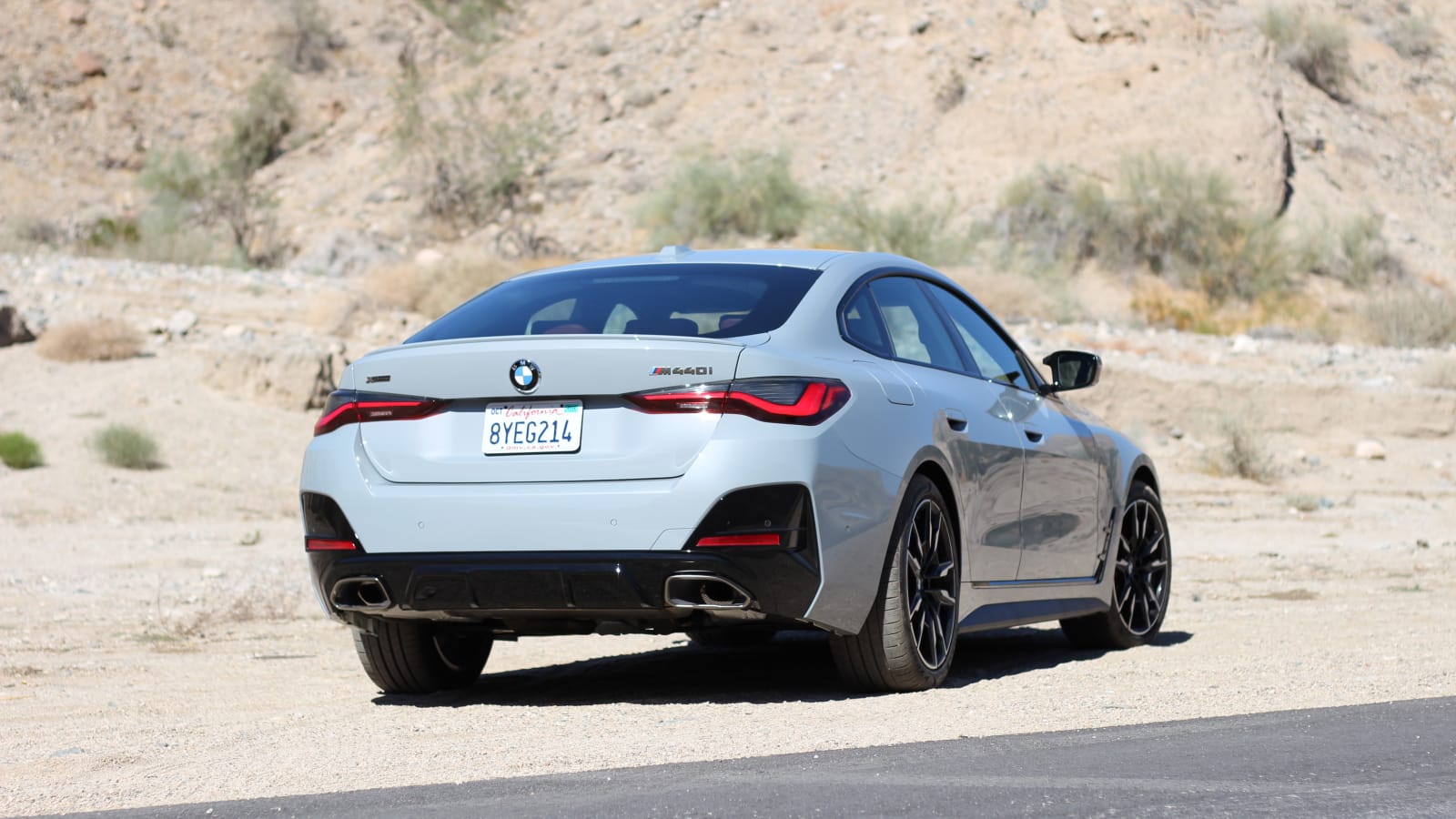 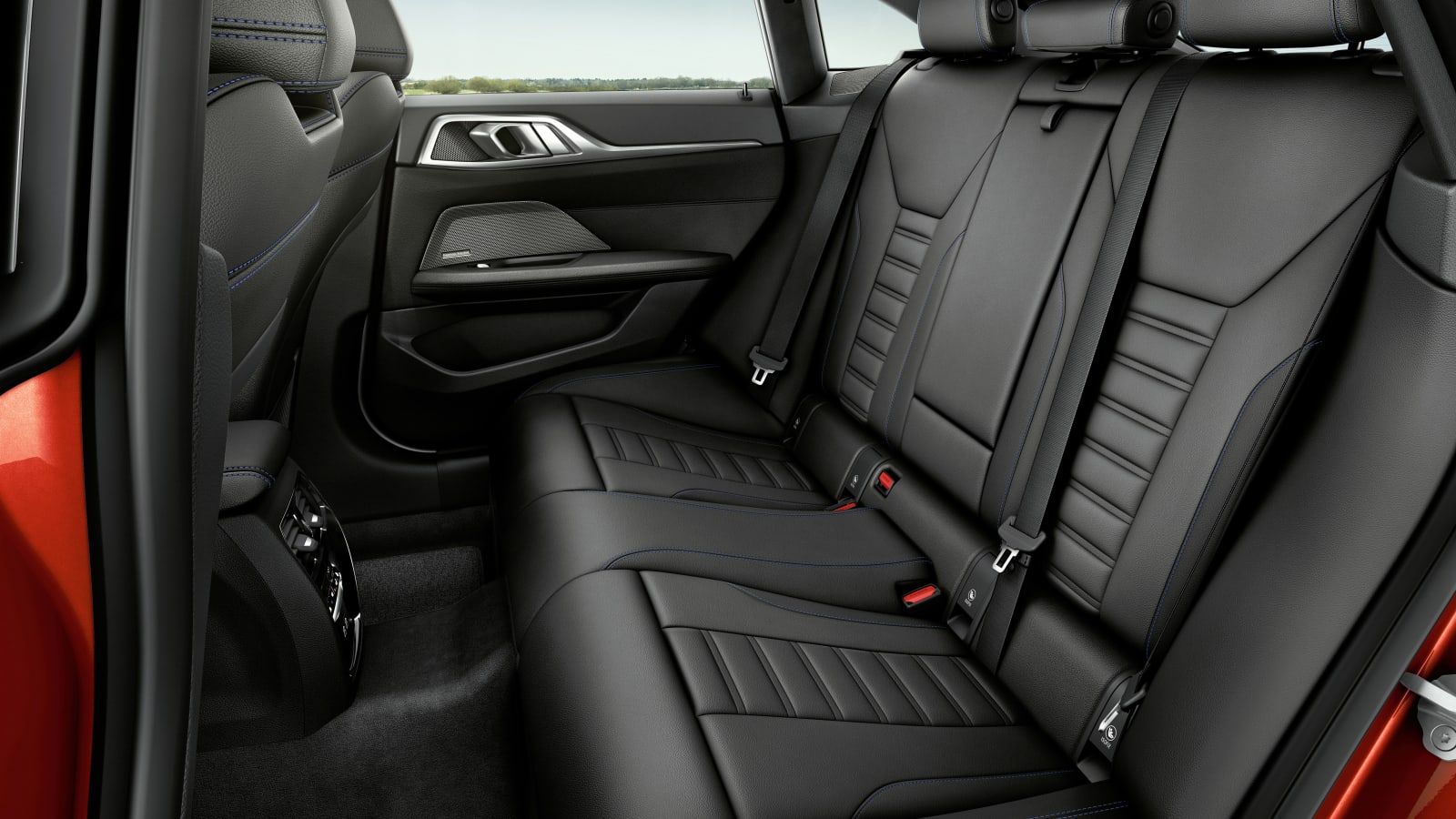 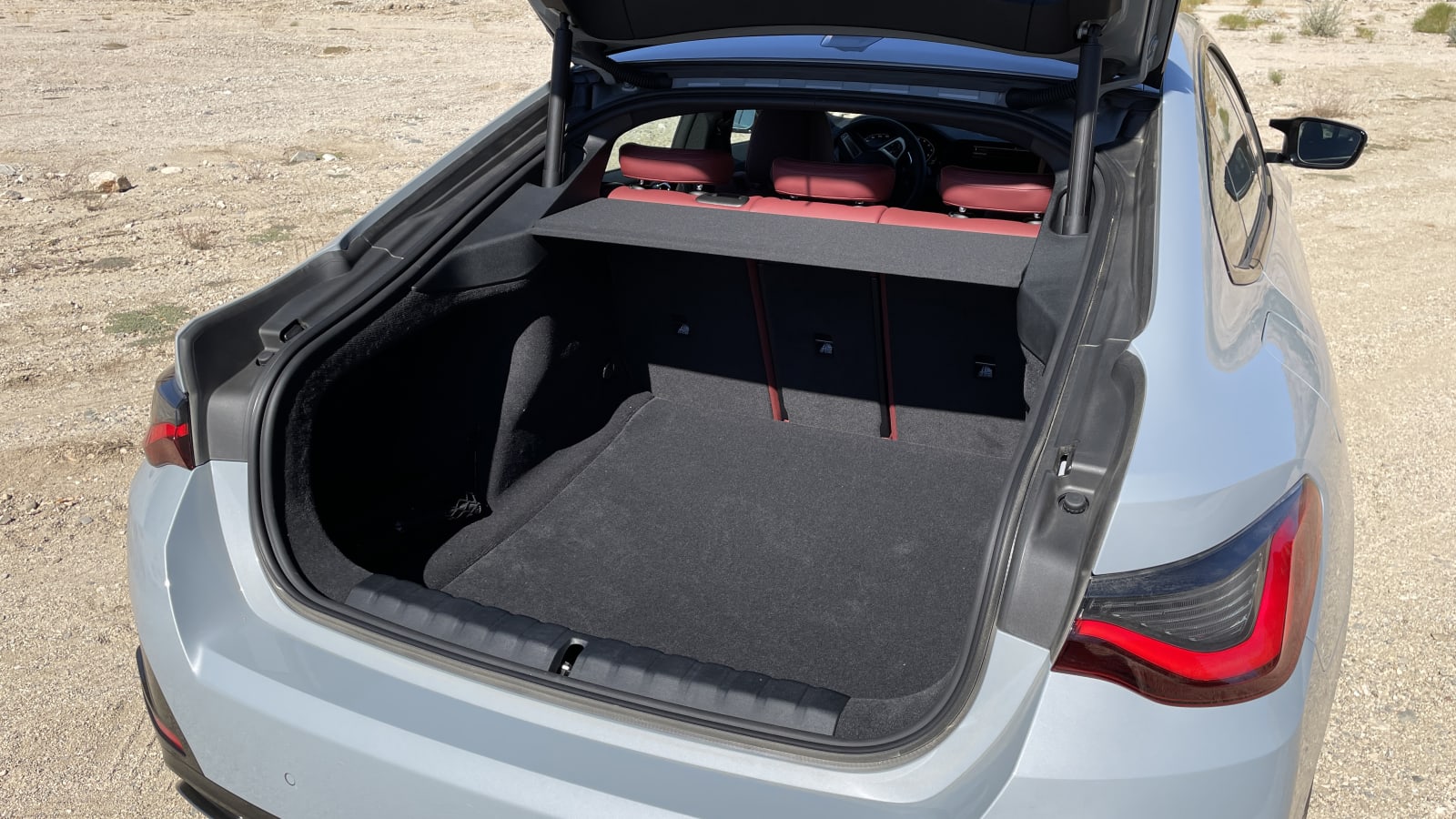 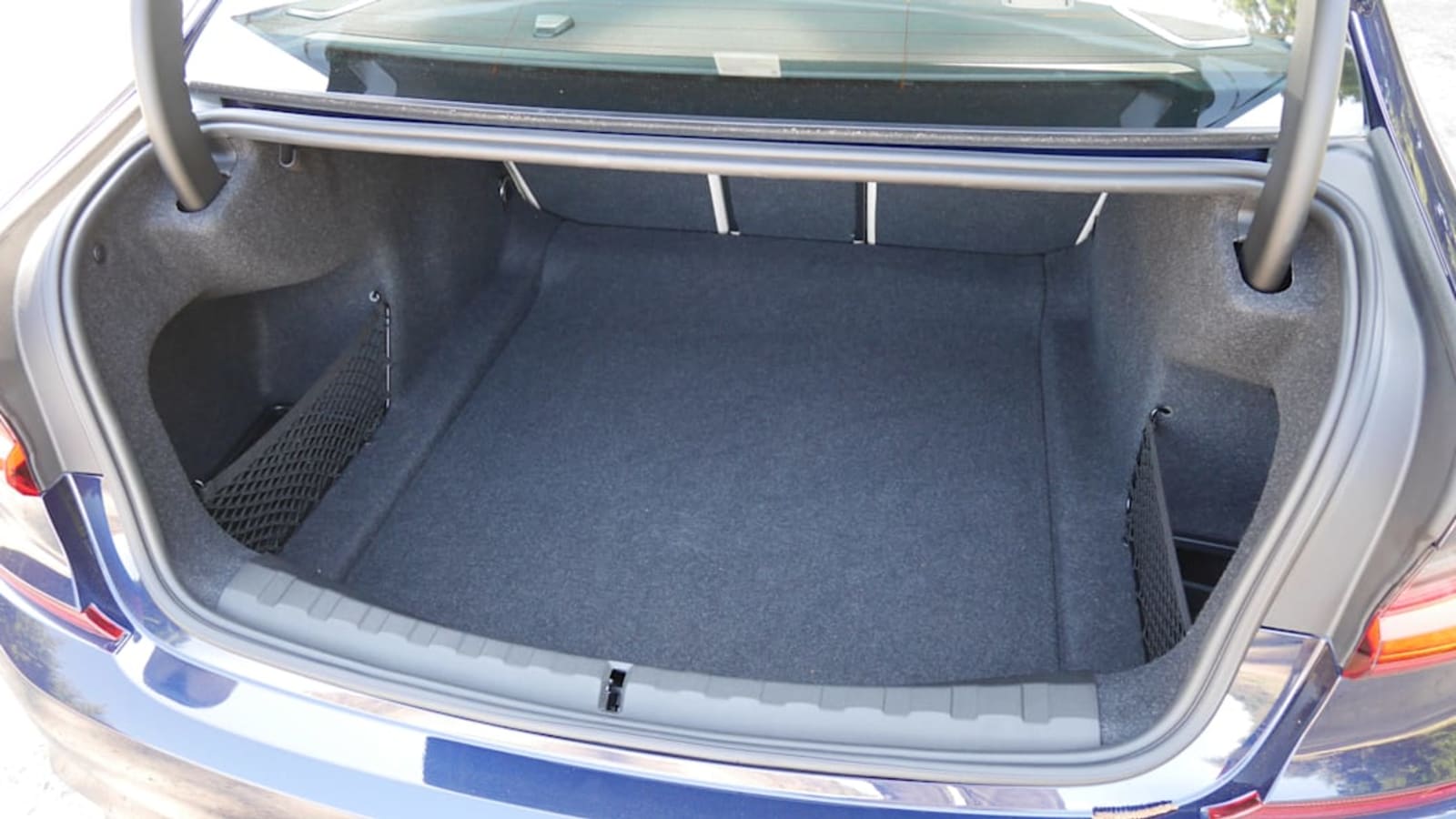 And even though the current 3 Series is rather spacious, nothing beats a hatchback when it comes to ultimate utility. Cargo space is listed at 16.6 cubic-feet, which is actually less than the official 17.0-cubic-feet number BMW lists for the 3 Series. However, our testing has shown that 3 Series number to be inconsistent with other sedans and the amount of stuff you can actually fit inside. In other words, ignore the numbers. Instead, take a look at the above two trunks (4 Series Gran Coupe on the left, 3 Series on the right), then tell us which you’d rather have. Loading items into the hatchback is made extremely easy with such a massive opening, too — you get a power-opening hatch as standard equipment. Plus, the 20/40/20 folding seats can lay down for maximum hauling capacity. If you frequently need to handle big loads (or just desire the ability to on a whim), the 4 Series Gran Coupe is a far better candidate for the job than the 3 Series.

Unfortunately, the opposite can be said for handling passengers. Getting in and out of the 4 Series Gran Coupe is a hassle, as the opening is narrow and requires more contorting than the 3 Series does. Numbers-wise, rear seat legroom is only reduced by 0.3 inch versus the 3, but sliding in and out is the real squeeze. Once back there, the 1-inch headroom reduction also becomes apparent, as your 5-foot 10-inch tester’s hair was just brushing the ceiling. Win big on cargo room, or lose a little on rear seat comfort. The choice is yours.

Driving the 4 Series Gran Coupe — we only got to spend time in the M440i xDrive model — is similar to every other version of the 4 Series. Only the 430i and M440i xDrive models will be available initially, but BMW promises that both the 430i xDrive and M440i rear-drive models are on the way. The 430i uses BMW’s 2.0-liter turbocharged four-cylinder that makes 255 horsepower and 294 pound-feet of torque. The M440i xDrive gets a silky 3.0-liter turbocharged inline-six aided by a 48-volt mild-hybrid system good for 382 horsepower and 368 pound-feet of torque. When possible, the 48-volt system can provide an 11-horsepower boost that can aid pick up off the line or get you moving quicker from a quick stab of the throttle while at speed. 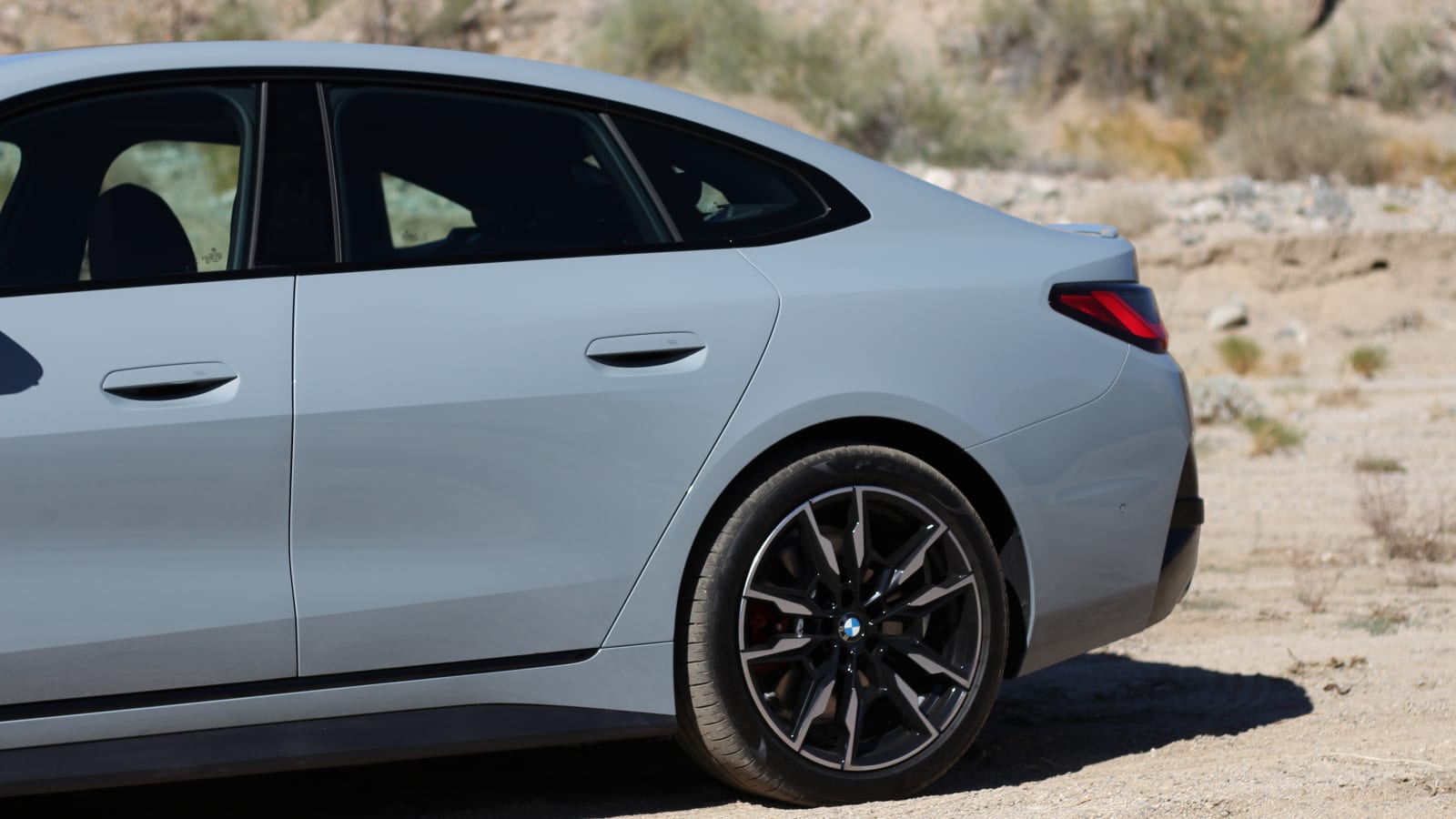 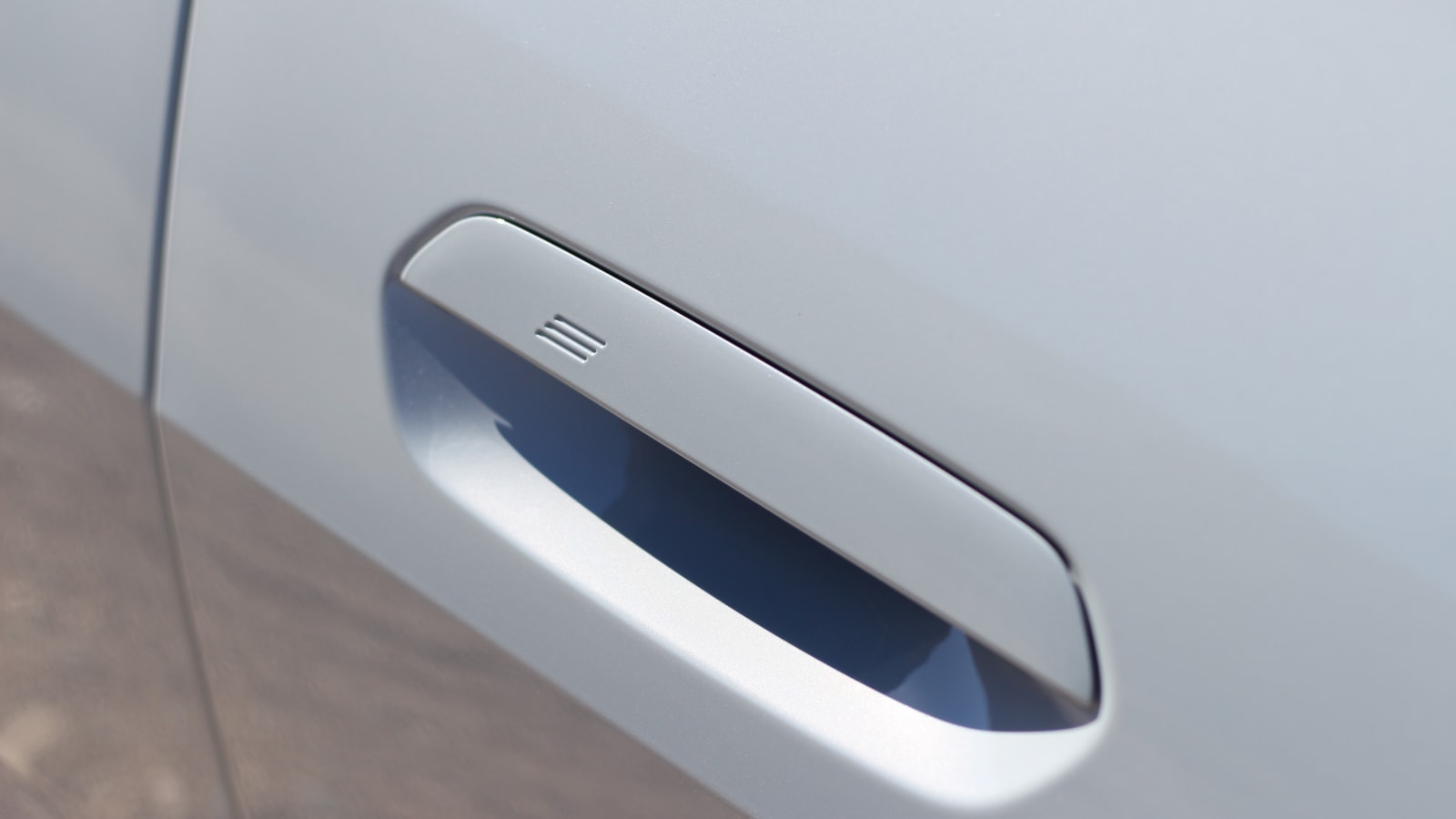 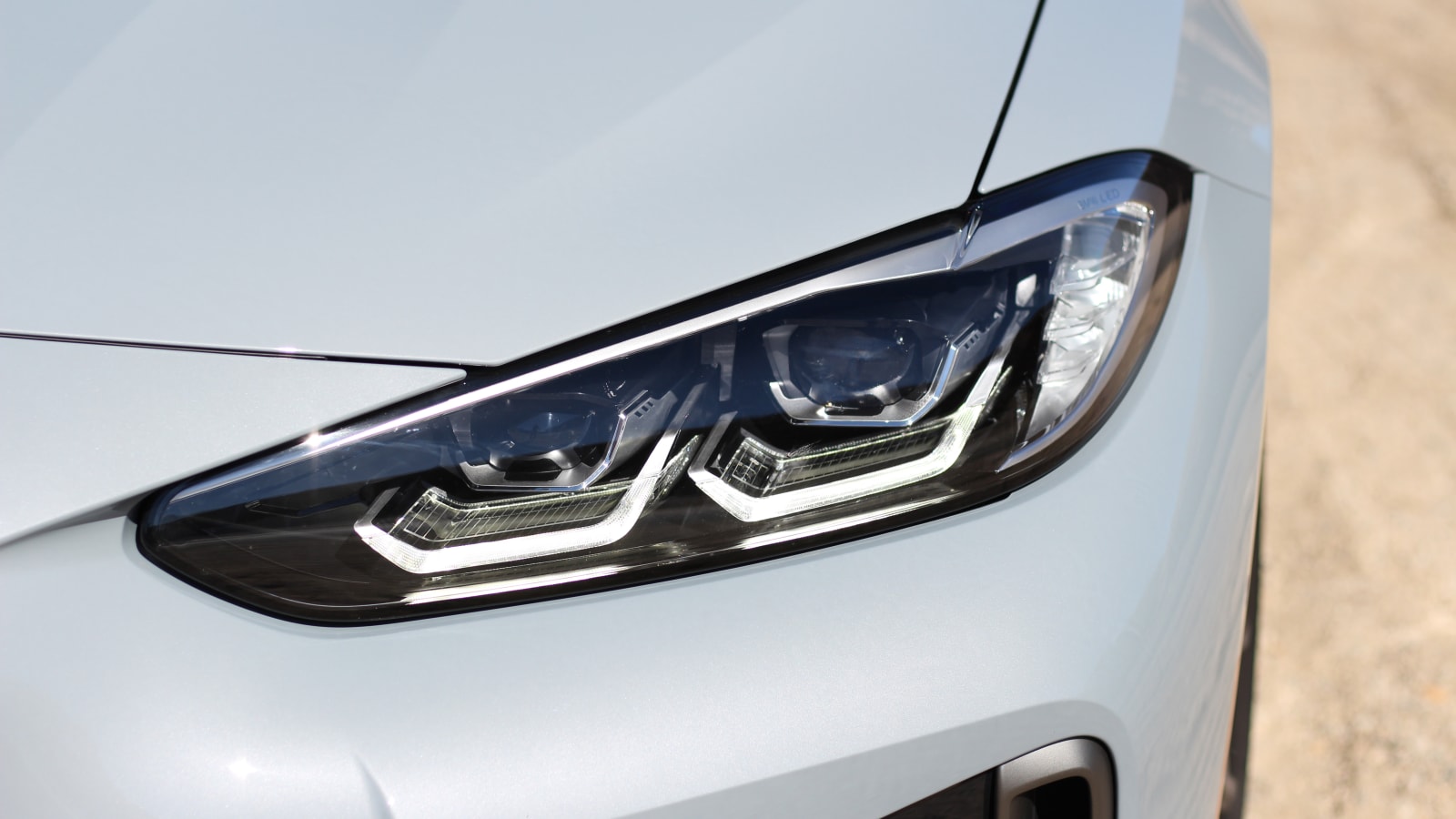 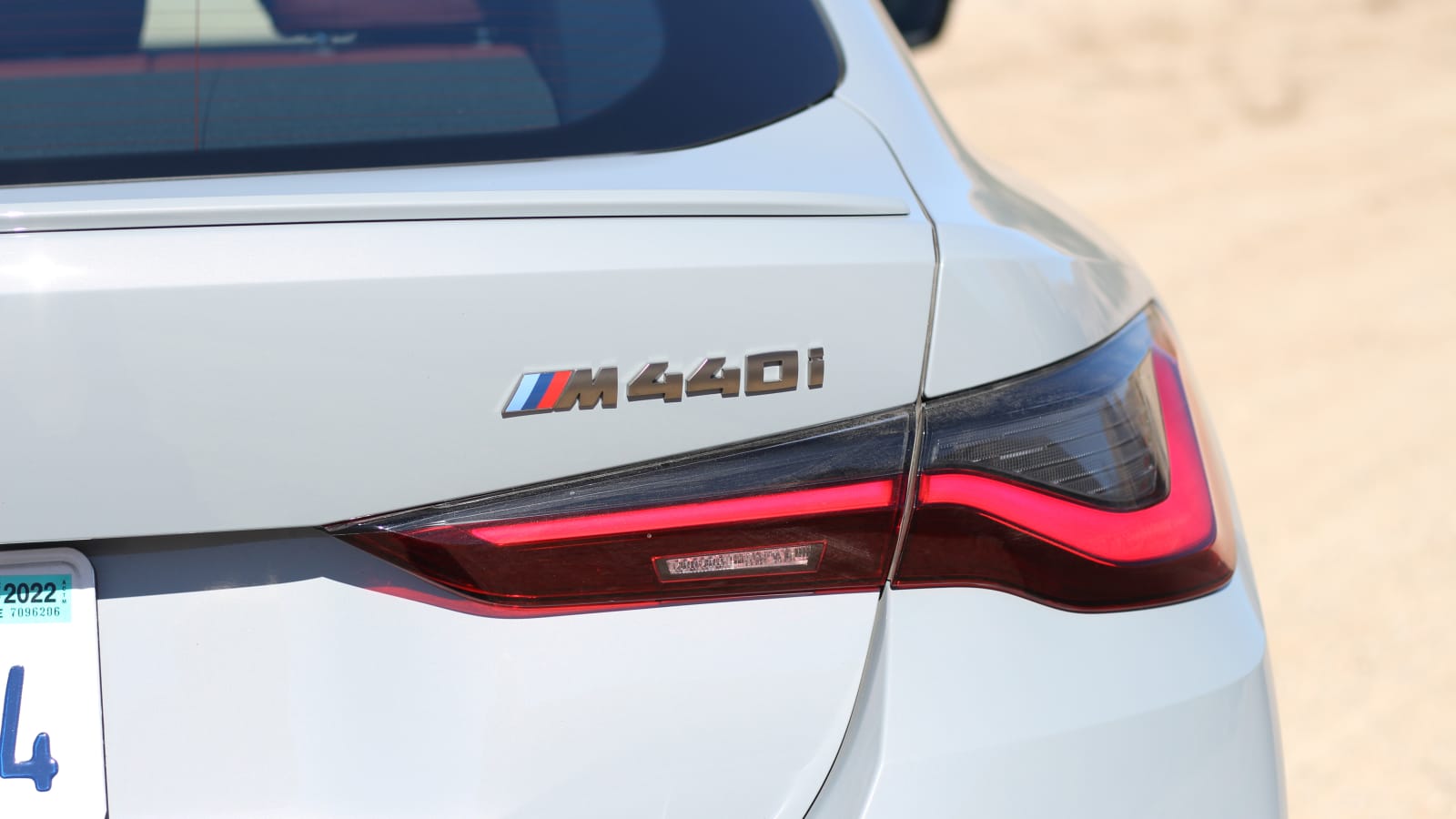 Sheer acceleration is the one performance area where the M440i takes a backseat to the M340i and its two-door counterpart. It hits 60 mph in (a still short) 4.4 seconds, versus the M340i xDrive’s 4.2 seconds and the M440i xDrive Coupe’s 4.3 seconds. Blame the Gran Coupe’s additional weight on that slower time, as it’s 201 pounds more than the M340i and 192 pounds more than the two-door. You’ll see similar hits taken by the 430i Gran Coupe in acceleration, as it falls victim to a similar weight gain.

Dynamically, the M440i Gran Coupe achieves at a high level. The M440i xDrive model we drove was fitted with BMW’s optional Adaptive M suspension that adds electronically controlled dampers. Plus, it gets BMW’s variable sport steering, M Sport brakes and the M Sport electronically controlled differential. All of this equipment and the chassis’ base excellence adds up to a technically superb handling car with quick turn-in, good body control and high levels of grip. Just like other 4 Series models we’ve driven, though, the experience is a bit soulless. You’re attacking corners hard with great confidence; the chassis is more than capable, and acceleration is plentiful. But! It’s all a bit synthetic and anesthetized. Its steering is accurate, but limited in feel. The xDrive system gets you hustling down the road effectively, but rear-wheel drive — as we experienced in the M440i Convertible — would bring a sense of fun and playfulness that this car is currently lacking. Thankfully, a rear-drive version is on its way.

On the bright side, we still don’t have a bad word to say about the six-cylinder engine and transmission in this 4 Series. The noise, heady pull and pure smoothness of BMW’s inline-six is still second-to-none. One can even detect the smallest, little boost of electric power when those 11 helping horses kick in. This eight-speed transmission has about the same level of polish as the engine does, as it rips through gears with superb smarts and speed when left to its own devices on a canyon road. Take control with the paddle shifters, and it’s even more fun. Losing the solid separation of an enclosed trunk to the exhaust exiting out under the bumpers means we get a fractional amount more exhaust noise filtering into the cabin, which is to our liking when each shift results in miniature explosive blats in Sport Plus mode. 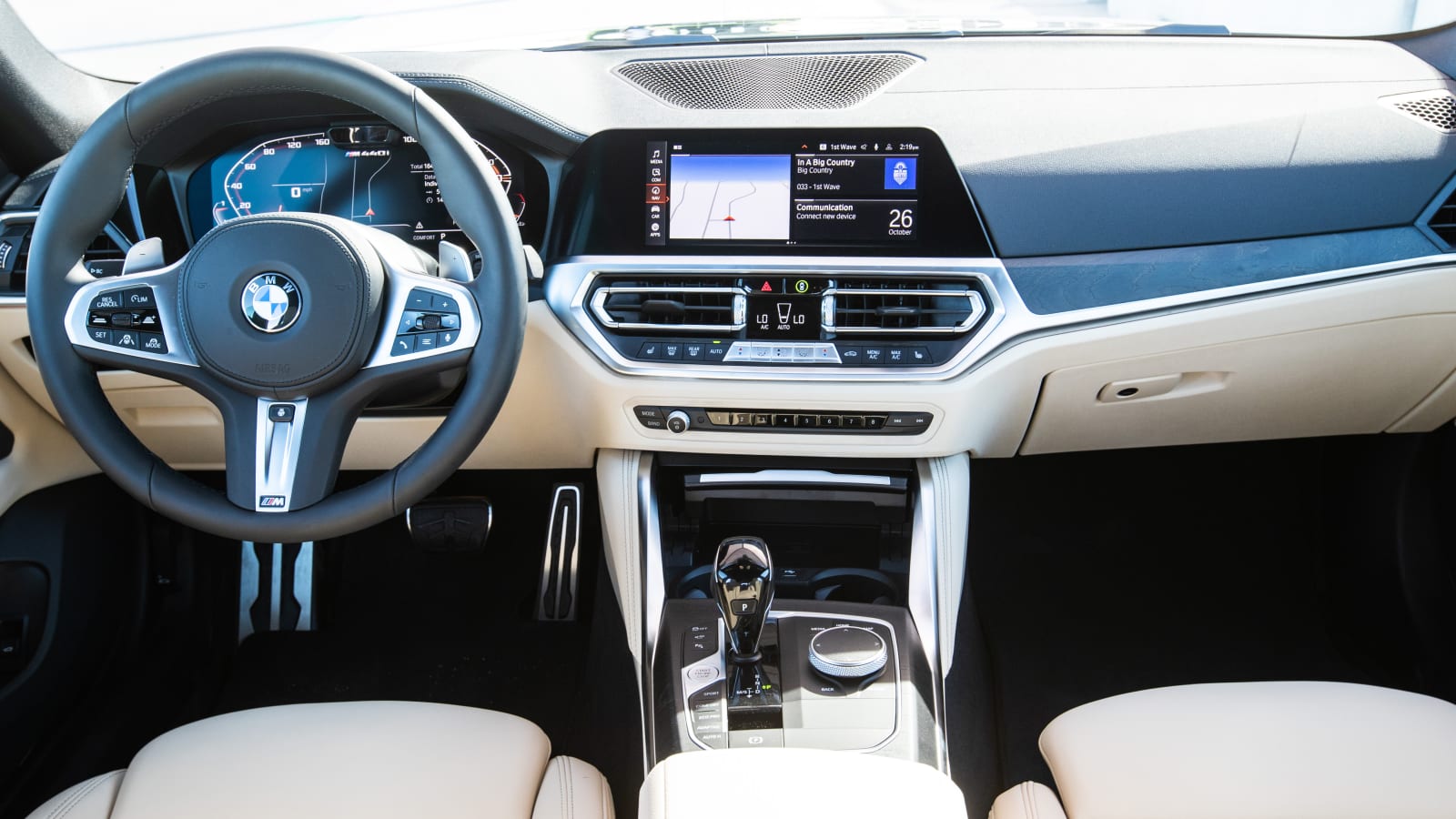 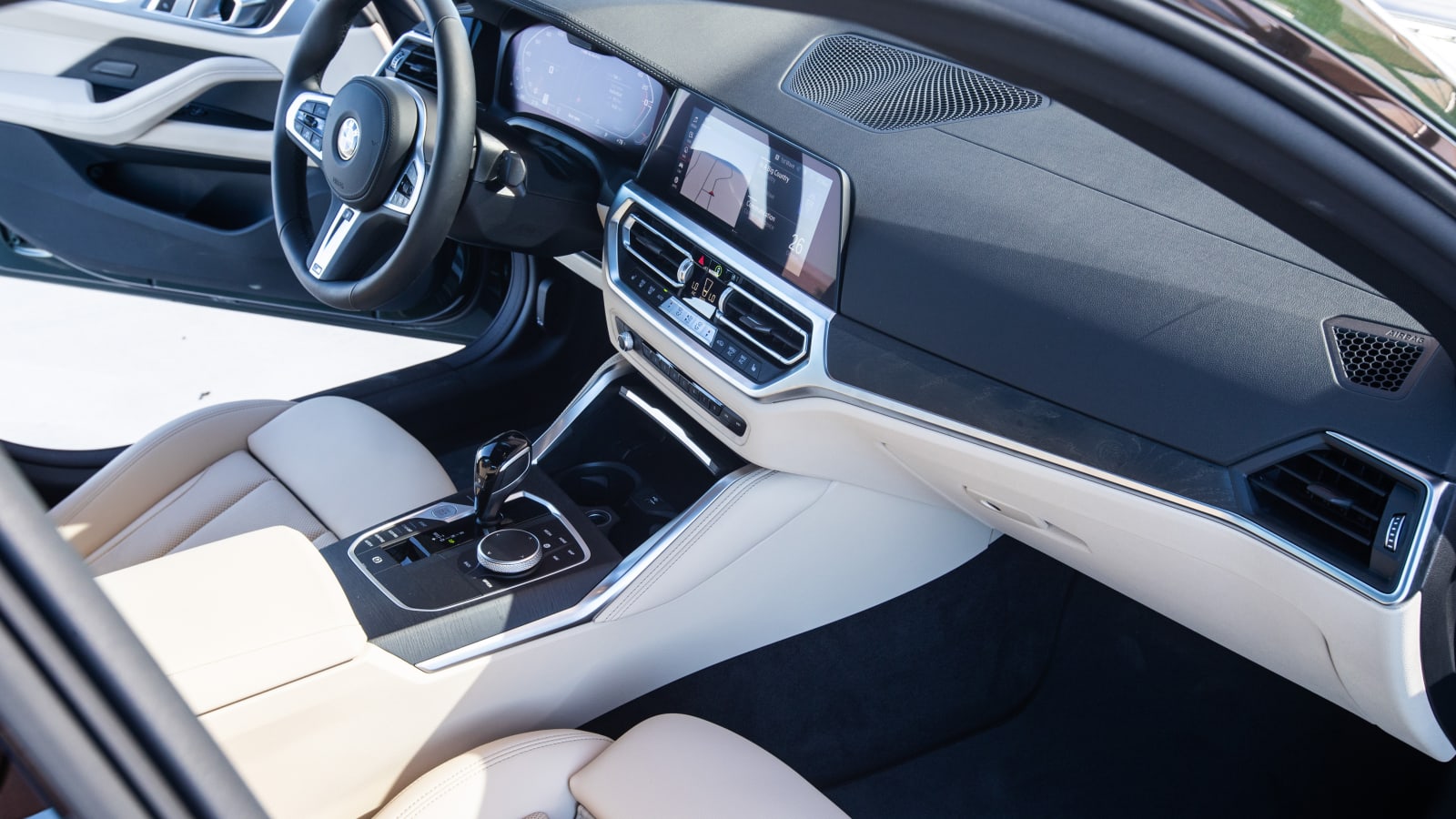 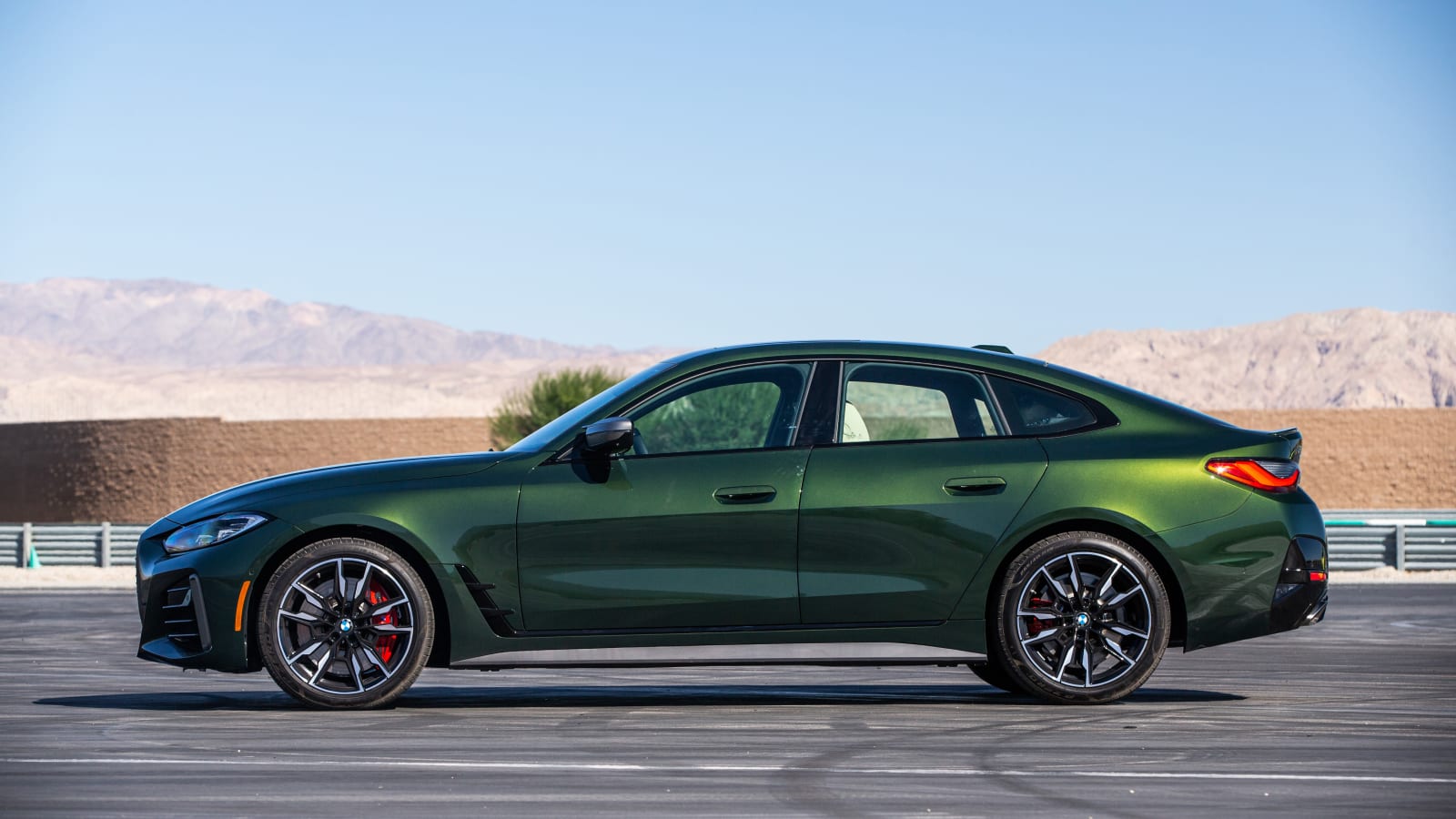 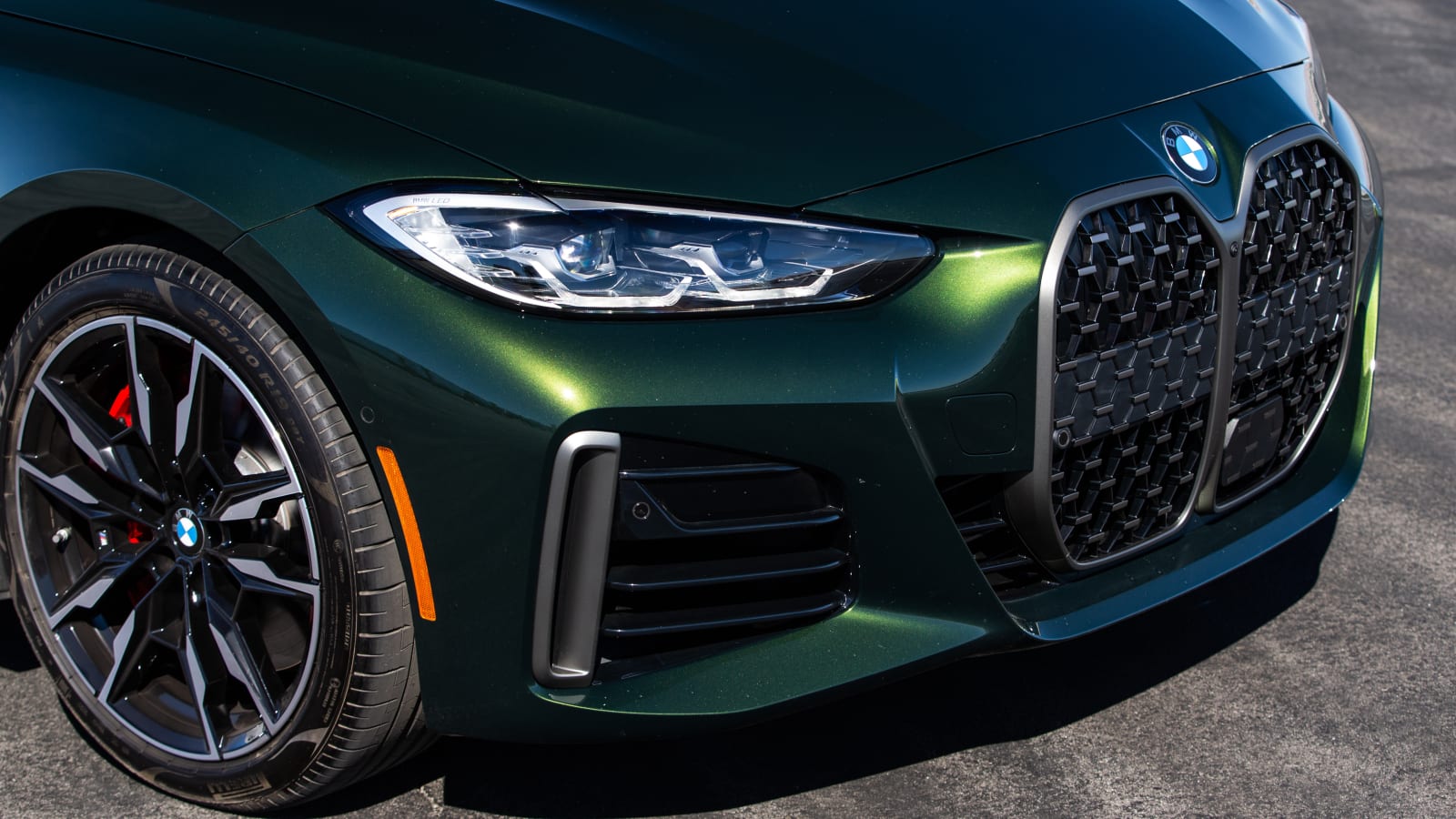 What BMW has lost in terms of chassis and steering involvement, it’s nearly made up for in powertrain perfection. You can be endlessly entertained on a straight road with this sweet engine. And you can also stick it in Comfort, and cruise quietly along while the adaptive dampers do a lovely job of soaking up poor roads. It’s an ideal compromise of capability and comfort for a sporty commuter car — too bad yours might not be delivered with a touchscreen infotainment system thanks to the ongoing chip shortage. You will get respectable fuel economy with the M440i xDrive at least, as it’s rated at 25 mpg combined, equaling both the M440i xDrive Coupe and M340i xDrive. Ratings for the 430i Gran Coupe are also equivalent to the other body styles.

Surprisingly, adding a set of doors and a hatchback to the 4 Series somehow lowers the price, as the Gran Coupe comes in at cheaper base levels than the two-door Coupe commands. Your savings are minimal at $600 less for the 430i and $500 less for the M440i xDrive, but going down is better than up. Unfortunately, options will ding you just as hard with the Gran Coupe. Our M440i xDrive tester started at $59,195 and ended at $69,920. If you want niceties like heated seats, ambient lighting, a head-up display, leather seats or BMW’s best driver assistance offerings, you’re going to have to pay a similar price. Nitpicking aside, the easiest way to save money on the 4 Series Gran Coupe is to simply buy a 3 Series. Both the 330i and M340i xDrive cost about $3,500 less than their 4 Series Gran Coupe equivalents. Although we’ll never object to greater choice, considering that equipment and performance are generally equal among the pair, it ultimately comes down to paying a few grand for a hatchback and The Grille. That’s a tough ask. We’ll have the 3, please.